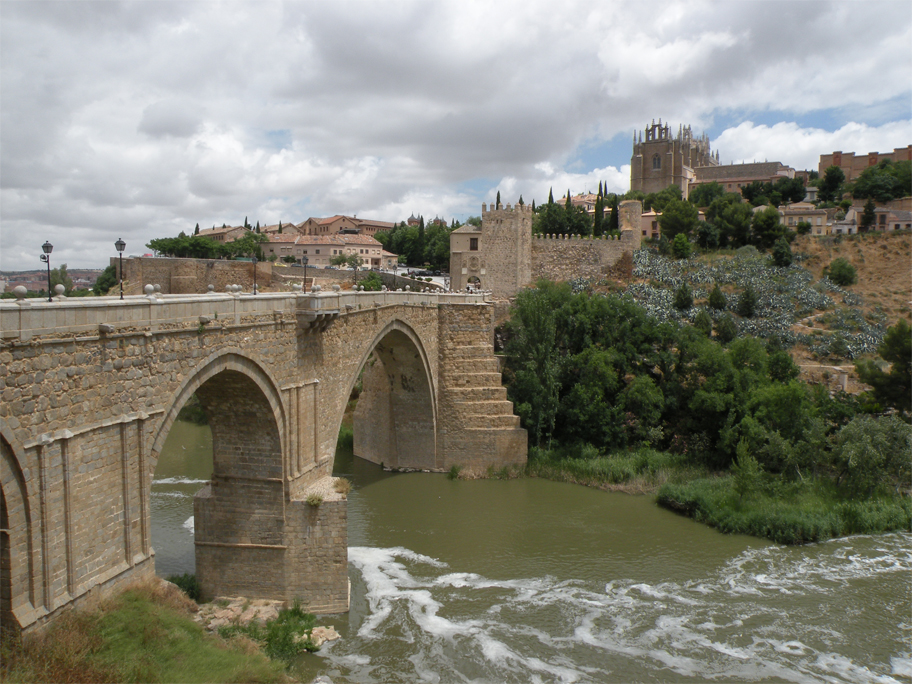 Just half an hour away by train from Madrid, the former capital of Toledo is famed for being an example of early tolerance. Between the 9th and 16th centuries, the city was the centre of La Convivencia – the peaceful coexistence of Muslims, Jews and Christians in medieval Spain. As a result the city became a major centre where ideas were exchanged between the three communities.

Today evidence of that interaction can be found in both the architecture and the handicrafts of Toledo. Among these is Damascene, a type of decorative metalworking adopted from the Moors. Made using a combination of gold interlaced on iron or steel, Damascene plates and jewellery bear witness to the extraordinary craftsmanship of the Muslims who chose to stay on in Christian Spain – the mudéjars.

When Chelsie and I arrive in Toledo it doesn’t take long for us to notice the weight of its history. The train station itself – built in the early 20th century – was designed in a neo-mudéjar style, with rich decorations and motifs pointing towards the Islamic architecture of North Africa.

Deliberately avoiding the big tourist buses outside, we make our way into the centre on foot. Within the space of a few minutes we are rewarded with our first glimpse of the old city from afar. There is no doubt that part of its allure lies in the nature of its dramatic setting – crowned by the turreted alcázar, or fortress, Toledo occupies the high ground inside a bend of the Tajo, the longest river in the Iberian Peninsula. 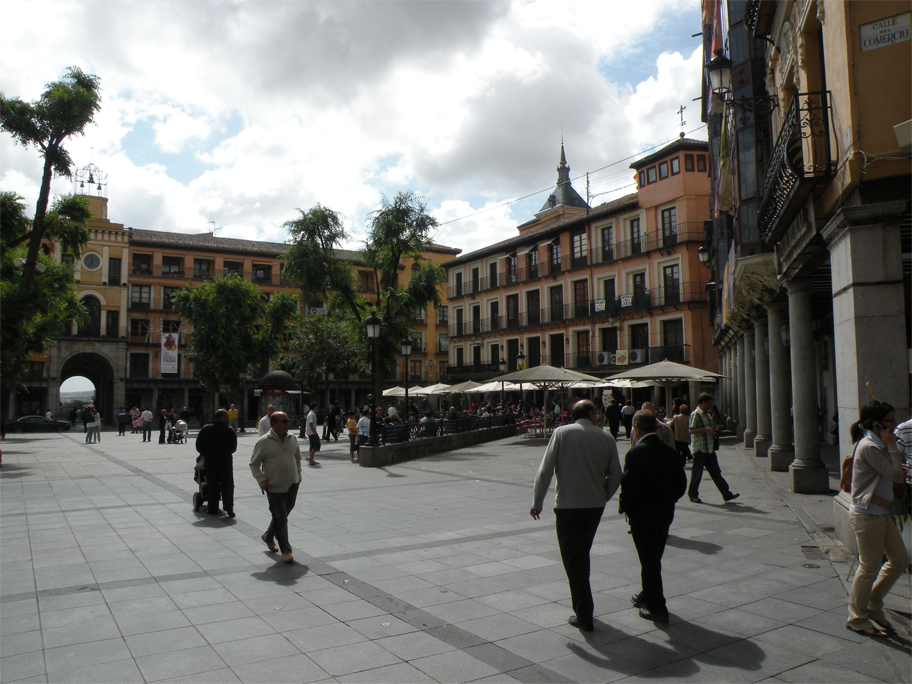 Eventually we make it past the imposing Puerta de Bisagra and find ourselves wandering around the maze that is the medieval core. One of the hallmarks of visiting Toledo is the act of getting lost in its winding streets, but the general rule is that going uphill will lead you to the alcázar or the triangular Plaza de Zocodóver, Toledo’s market square.

From there it is not actually that difficult to negotiate a way to the cathedral: the main route is marked by a myriad of shops selling souvenirs, handicrafts, and mazapán, a specialty of the city. We went to Toledo in the wake of its Corpus Christi celebrations, so the streets were still decorated with a frenzy of canvas awnings, lanterns, and hanging boughs. 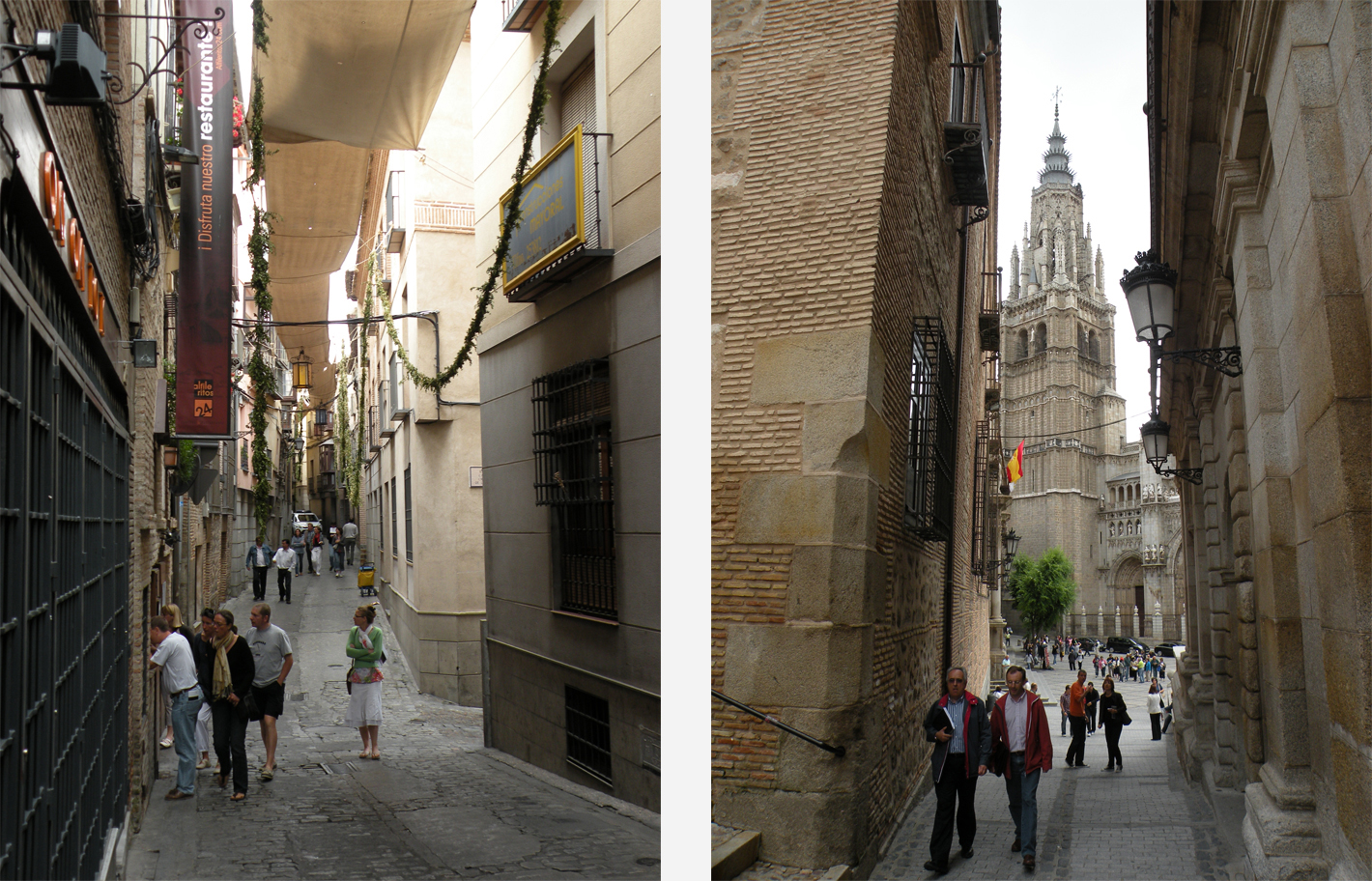 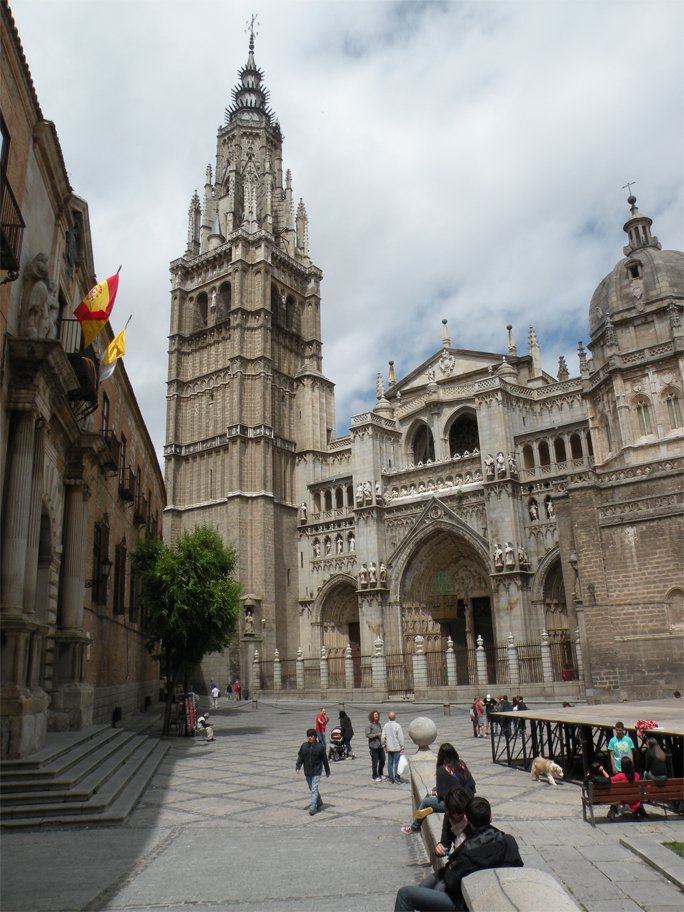 If you don’t have much time in Toledo, make the spectacular cathedral your first stop. Built over the former city mosque, this structure is considered the very pinnacle of Spanish Gothic. The light-filled interior is absolutely breathtaking, but be warned, it costs a hefty 7.00 Euros to get full access. And photography is not allowed.

Perhaps that is the downfall of Toledo’s status as a UNESCO World Heritage Site. Practically every attraction – no matter how small – comes with an admission fee and a ban on photography. I was particularly interested in the Synagogue of Santa María la Blanca, which had the distinction of being designed by Islamic architects for Jewish use in an otherwise Christian kingdom. The interior was sublime but I could not get a photographic record – instead I had to make do with a few close-ups of its decorated iron doors. 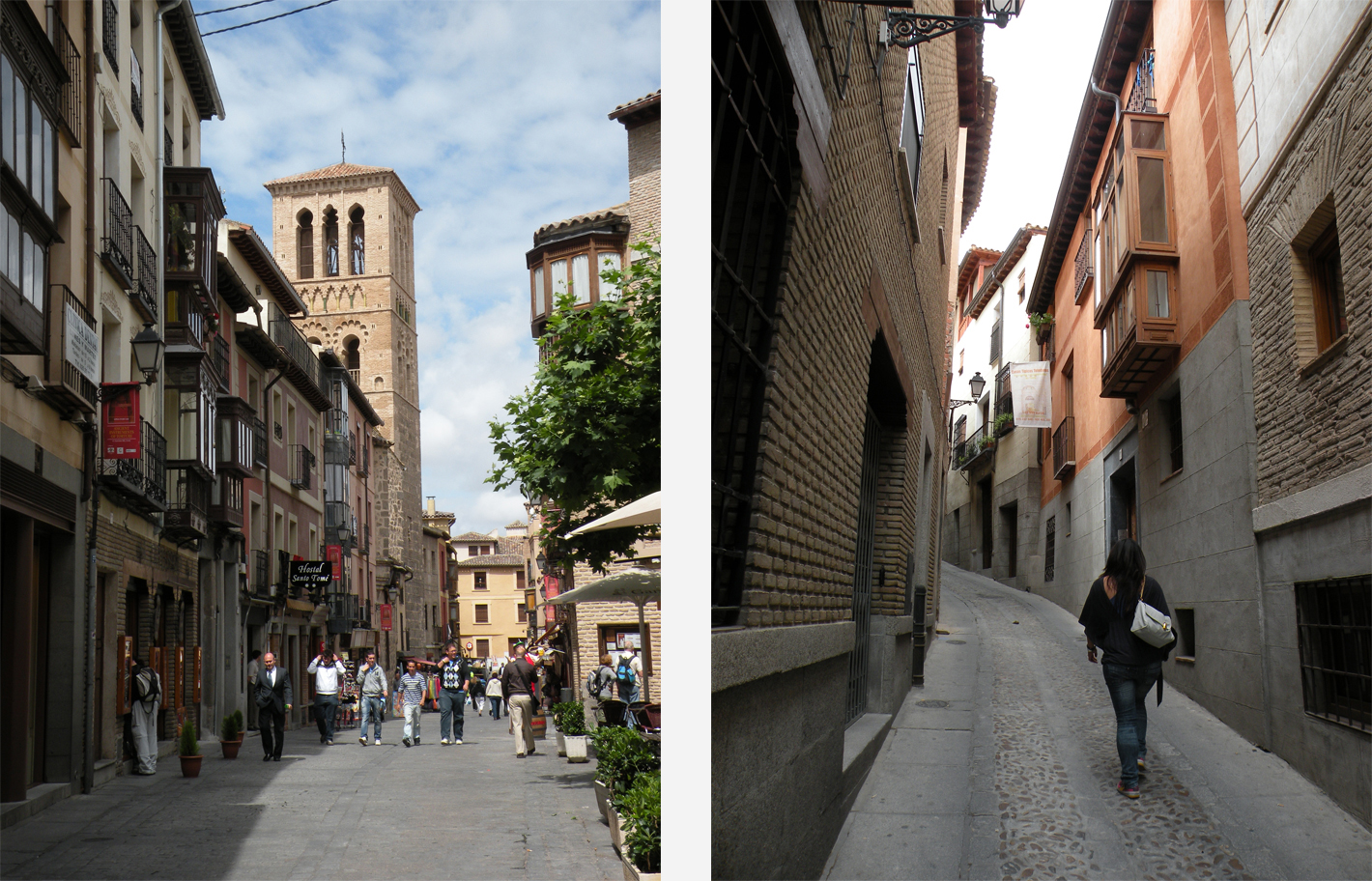 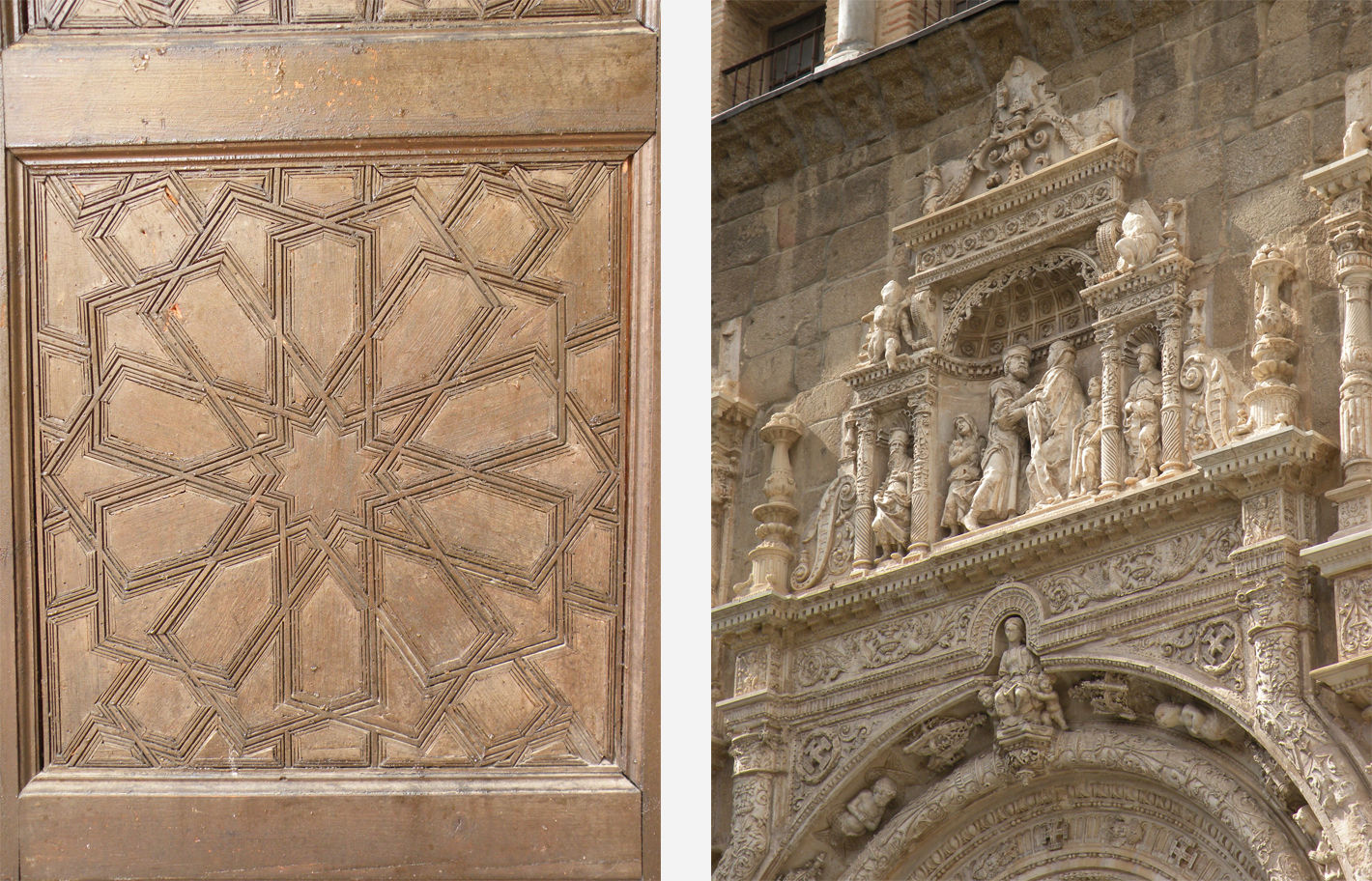 The only major attraction that allowed photography throughout was the Franciscan Monastery of San Juan de los Reyes. Built between 1477 and 1504, it is a gorgeous fusion of Spanish and Flemish Gothic. Aside from a soaring chapel, the monastery also features a beautiful cloister encompassing an intimate garden. With its orange trees and fan palms, it could pass for the setting of a film on El Cid.

Before leaving the monastery, make sure you don’t miss the upper level of the cloister; its character is decidedly different from the floor below. Your eyes will instantly be drawn upwards to the mudéjar ceiling of painted wood. 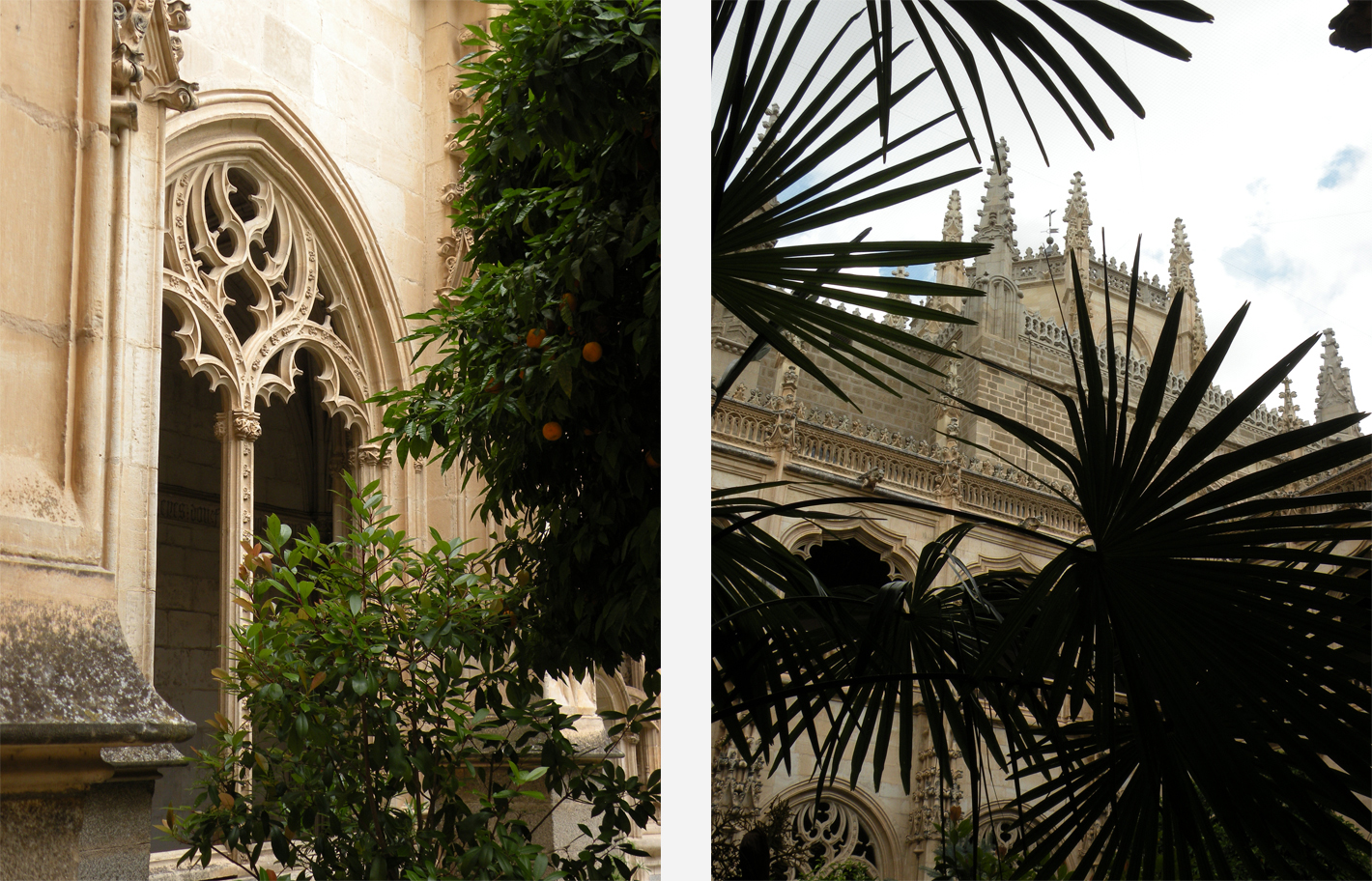 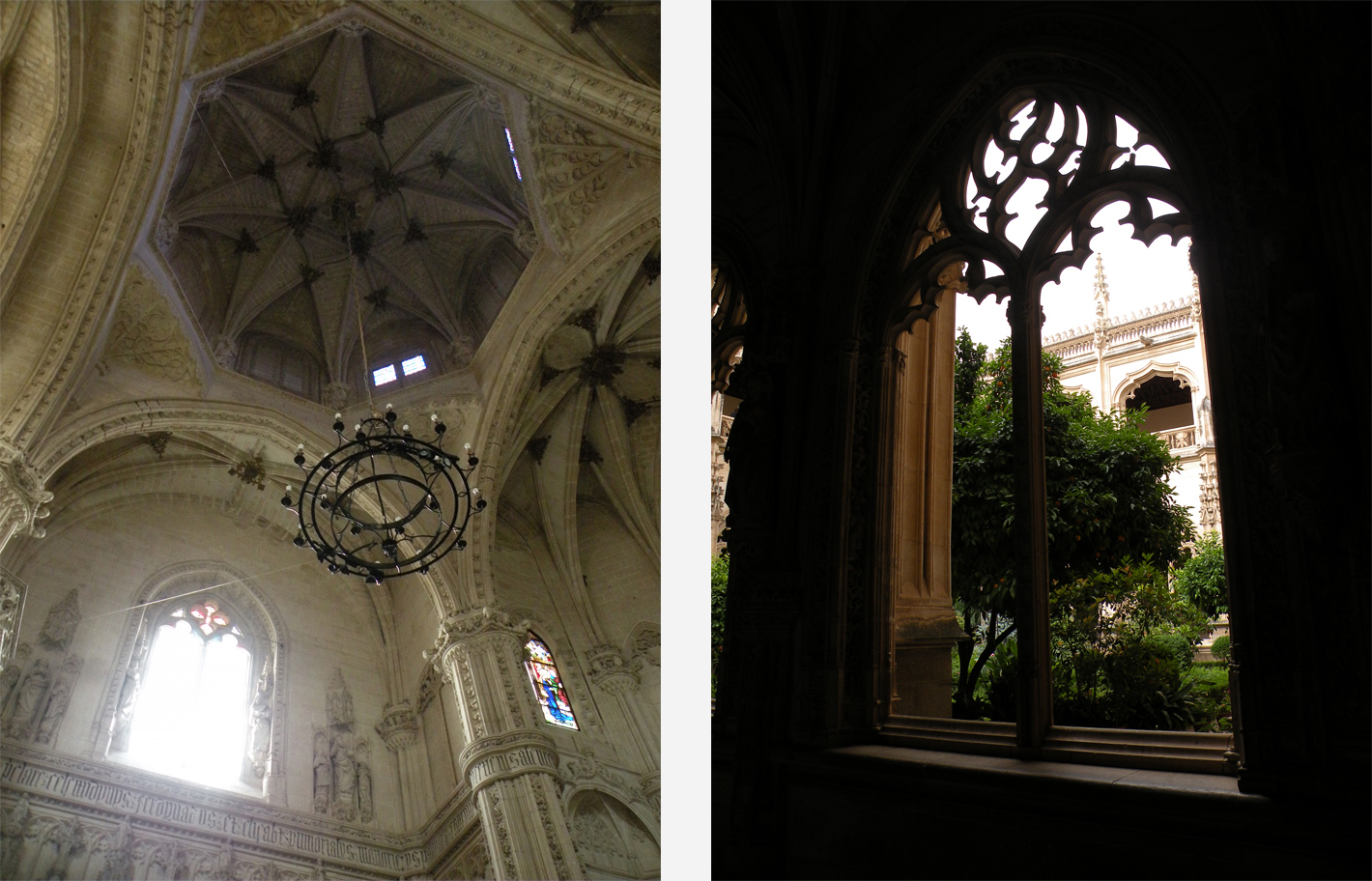 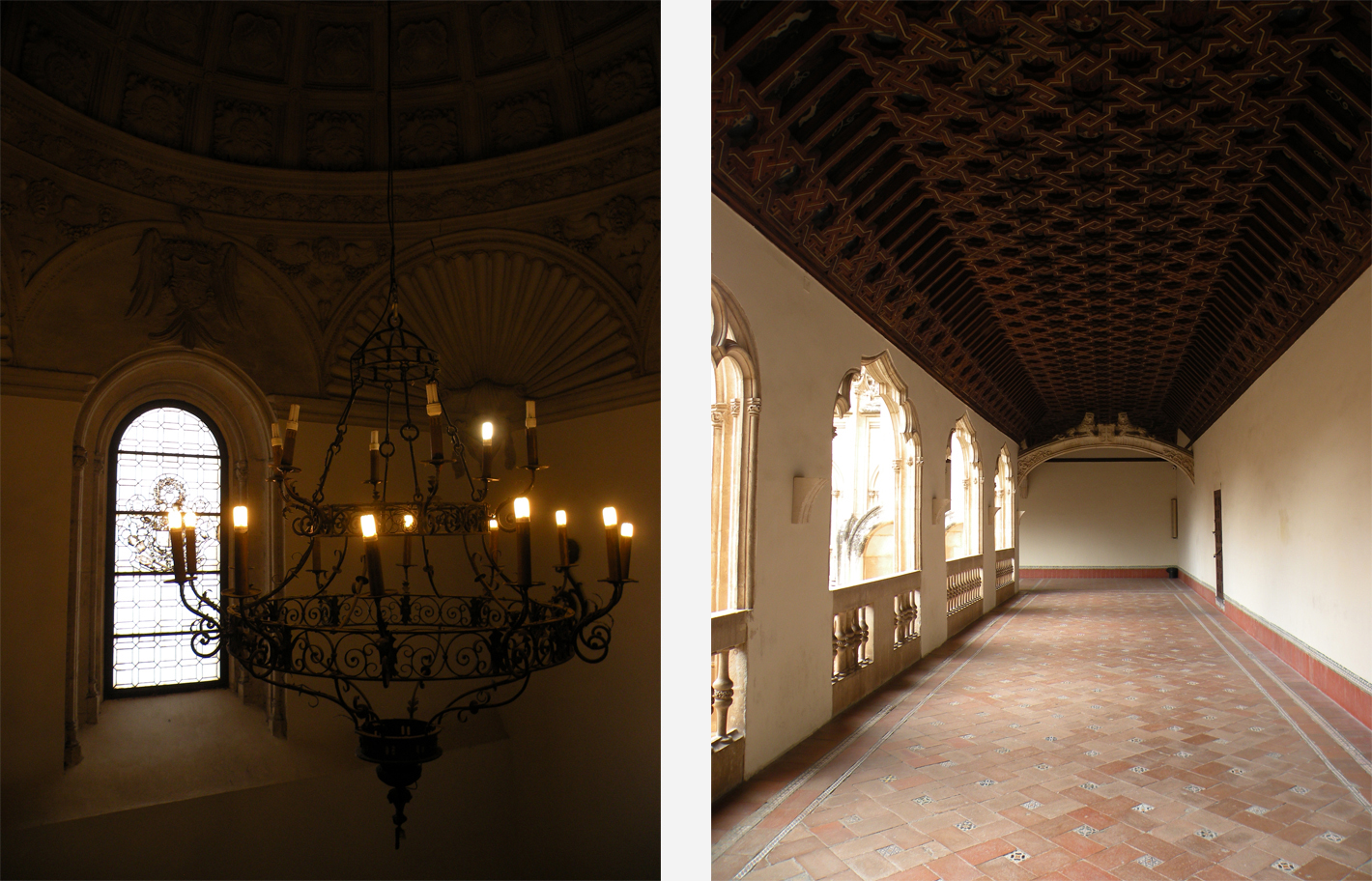 Just down the hill from San Juan stands the heavily fortified Puente de San Martín: this bridge was built in the late 14th century to provide access to Toledo from the west. We stroll to the other side, taking in dramatic vistas of the Tajo valley and the old town. 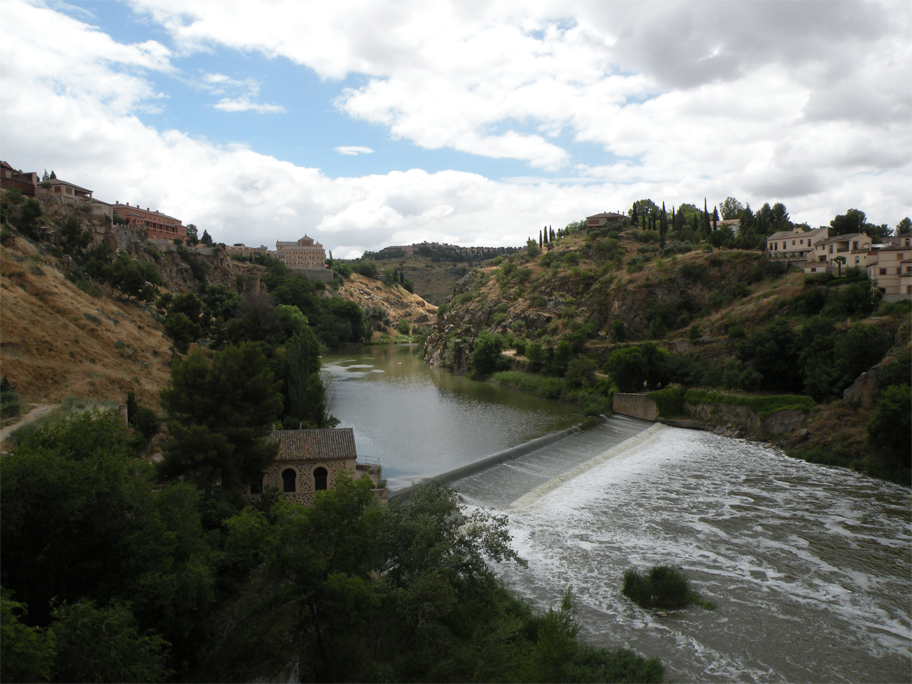 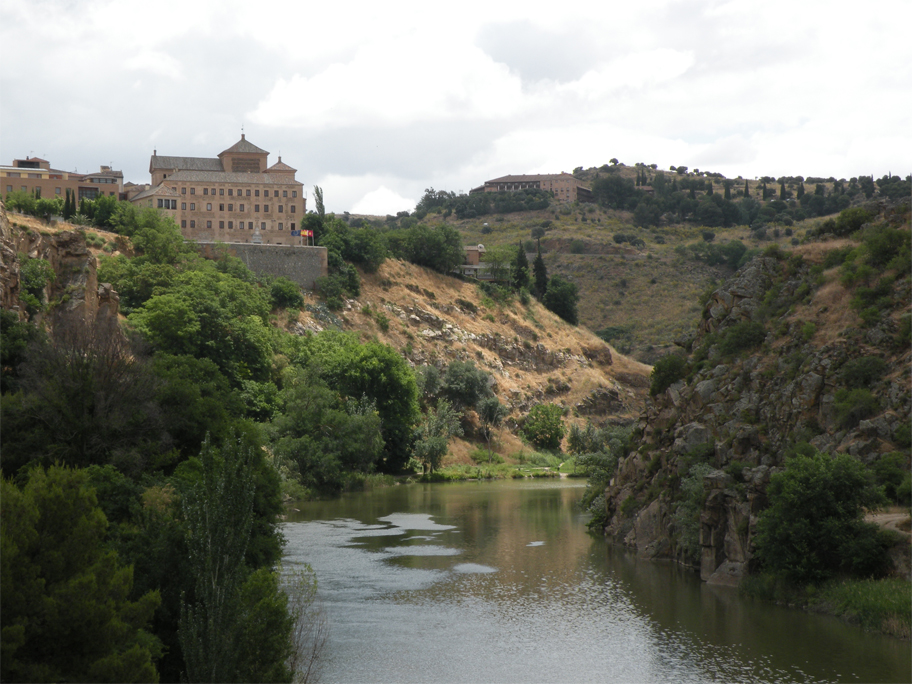 Before long our stomachs begin to rumble, so we head back into the walled area in search of a place to eat. I remember a word of advice that one of my Spanish friends shared before I left for Madrid: “If you want authentic Spanish food then don’t go to the big, brightly lit restaurants – those ones are usually very touristy. Look for the smaller places that are dark and dingy. And full of old men.”

Just off one of the main streets we find a nondescript restaurant that seems to fit the description. As we look through the menú del día a burly old man emerges from the darkness of the interior. He invites us in and recommends a few of the dishes on the menu. “The paella today is very good,” he says.

We sit down towards the back of the establishment and order our food. Both of us have paella for first course and Chelsie orders stewed deer for her mains. Feeling adventurous, I pick something which I do not know. It turns out to be some kind of unknown bird, possibly pheasant, and the meat is salty but very tender. In Spain it’s said that a meal is not complete without dessert, so we have two portions of delicious flan with a generous dollop of whipped cream. All this is washed down with – you guessed it – my favourite tinto de verano. 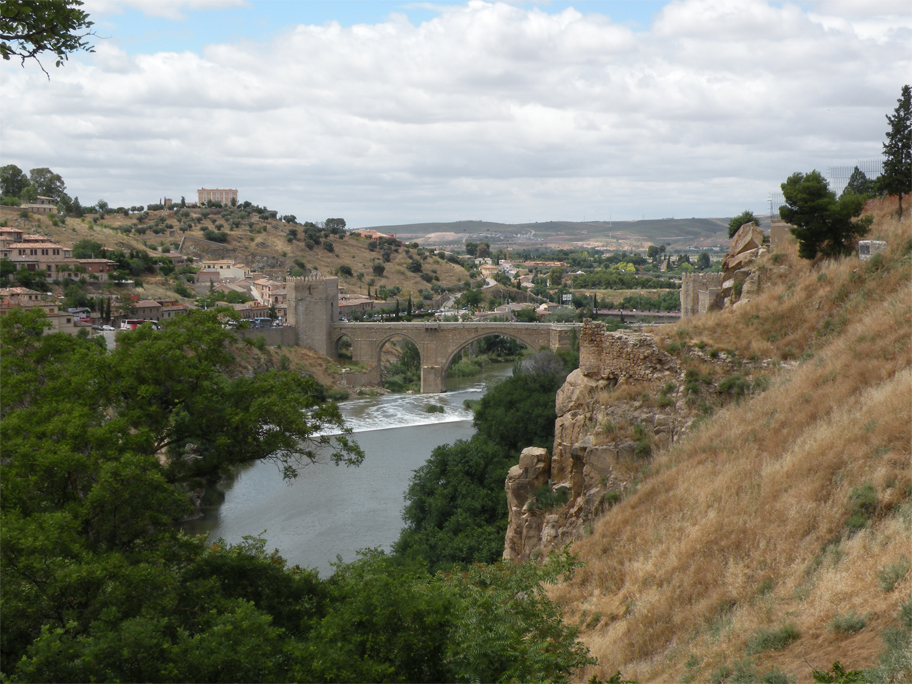 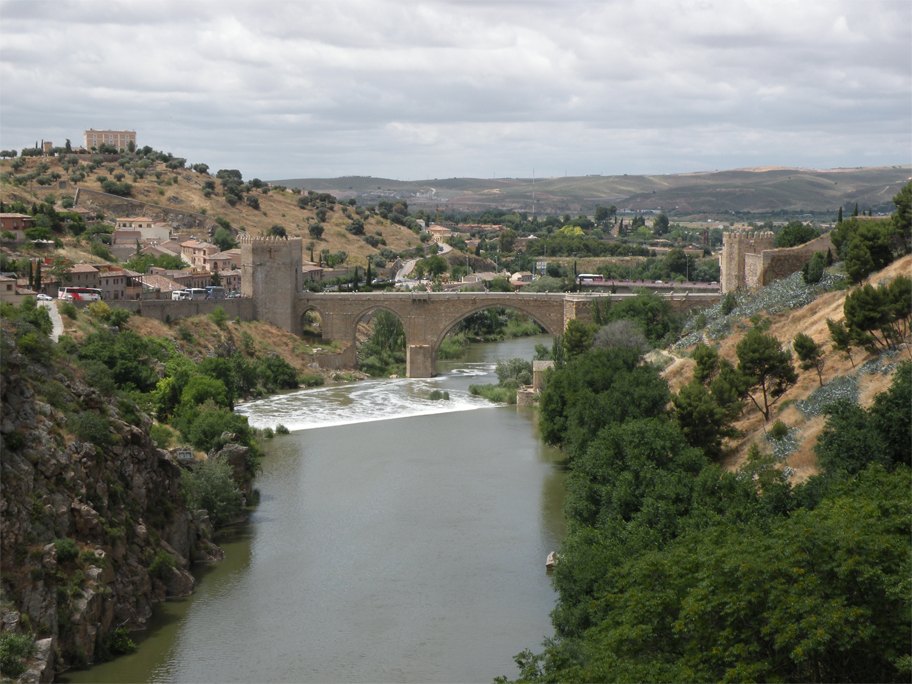 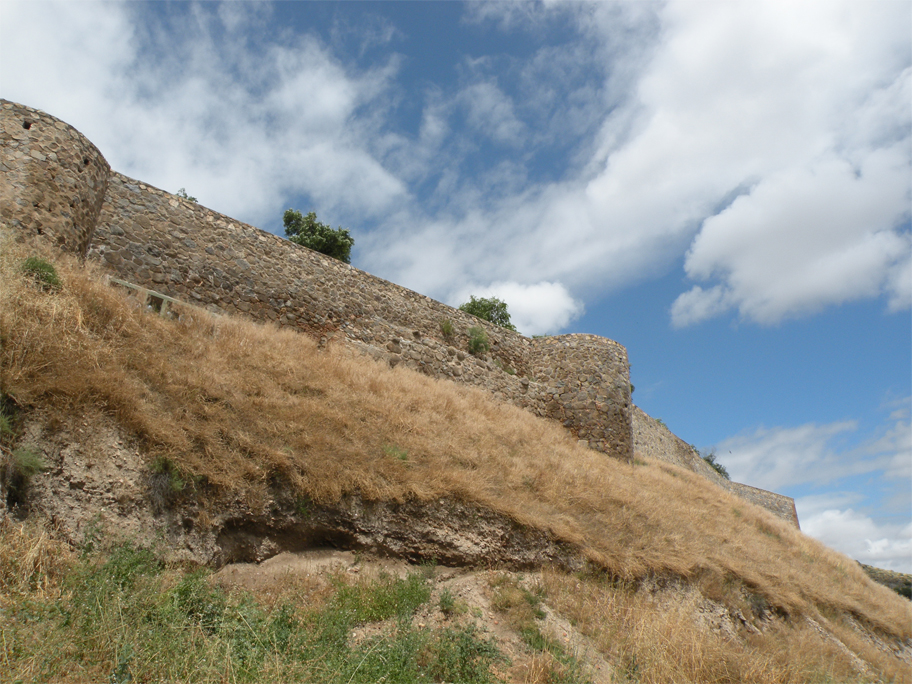 Drowsy from a hearty three-course meal and hours of walking, Chelsie and I end up having a long siesta on a bench outside the Museo de Santa Cruz. This is where we spend the majority of our afternoon soaking up the intermittent sun.

When it gets a little cooler we do a few rounds of window shopping before heading to a terraza to quench our thirst. By this time people around us are ordering tapas – they look enticing but neither of us have the capacity to stomach any more. Chelsie gazes at the food and looks back across the table. She laughs. “I think we’ll have our dinner when we get back to Madrid.” 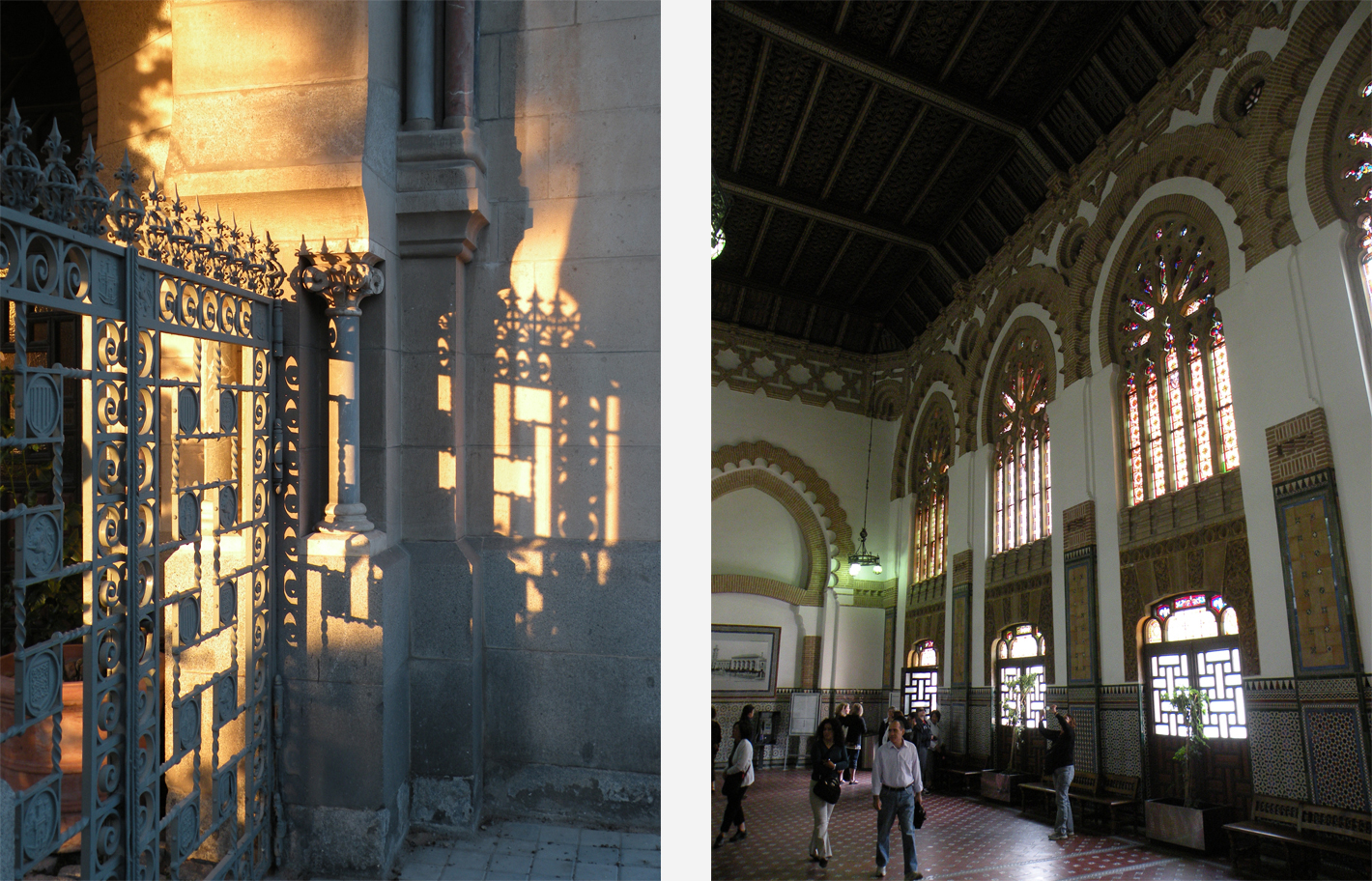 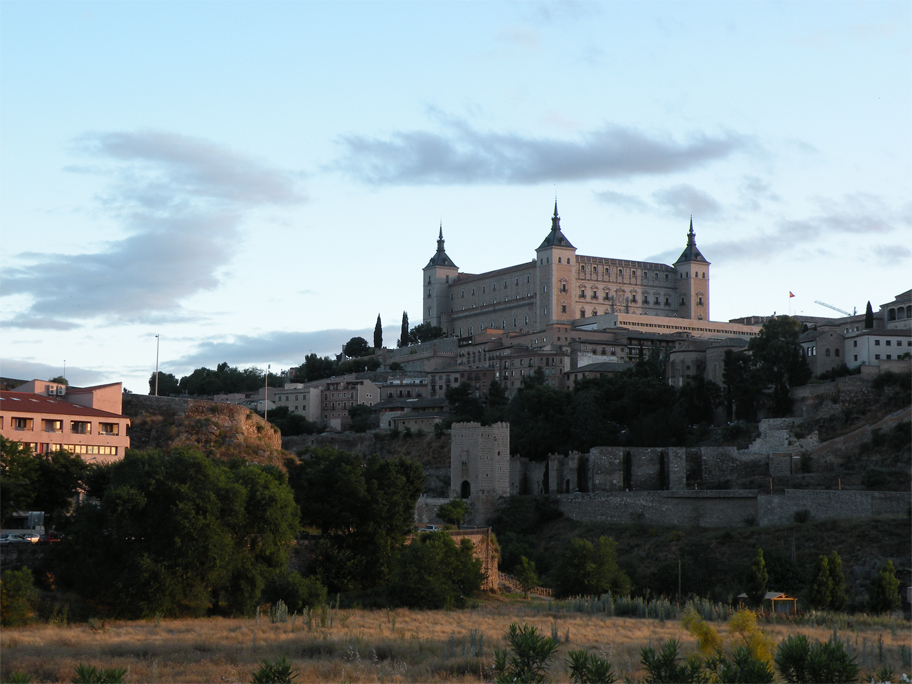 In the light of the setting sun, I sip my tinto de verano and reflect on the things I have seen in the past day. For a moment I remember the words of a close friend:  “Spain is changing very quickly,” she told me. “It is becoming more and more open so now is a very interesting time to go.” I mull over her words and wonder if Spain has entered a new period of La Convivencia.