As I write this I am sitting in a friend’s flat in Madrid. It is hard to believe that less than three days ago I was on the other side of the world, rounding up a long and unforgettable summer vacation.

After 2½ months spent relaxing in Hong Kong, the grand finale was last week’s Mid-Autumn Festival. No doubt one of the most important events of the Chinese Lunar Calendar, it is a harvest celebration characterised by family moments, good food, and swathes of bright colours.

Despite having the appearances of a freewheeling, modern financial centre, Hong Kong is still very much a traditional Chinese city. At its core are armies of strong family units and an unwavering belief in the old ways. Perhaps this is one of its defining characteristics – among other bizarre combinations the city is a heady mix of glass and bamboo scaffolding, with little shrines nestled among the concrete giants.

About a month ago my friend Reba arrived in Hong Kong from the United States. Having accepted a one-year contract as an English teacher, she was moving here permanently from a little town in the Midwest. When I saw her a few days before Mid-Autumn, she had asked me the following: “So how should I spend my first-ever Chinese festival? And what do people do aside from eating mooncakes?”

Along with my brother Justin, I decided to take her to see the Fire Dragon Dance in Tai Hang, an annual tradition native only to a small part of Hong Kong.

Eventually we met up in the heaving crowds of Causeway Bay, where we ducked into a local mall for a relaxing chat over beer mugs filled with Boba, otherwise known as Pearl or Bubble Tea. After realising that we had given ourselves too much time before the dragon dance, Justin suggested a stroll in nearby Victoria Park. It was totally unplanned but the timing was perfect – we arrived just before nightfall and the Mid-Autumn decorations would be switched on within a few minutes.

Scattered throughout an open area of the park, these paper lanterns depicted a range of traditional Chinese elements from opera masks to old bronze bells. Interspersed between some of the lanterns were red-crowned cranes, potent symbols of longevity. My absolute favourite was a display that mimicked an exquisite set of blue and white Jingdezhen porcelain, first developed during the early 14th century. 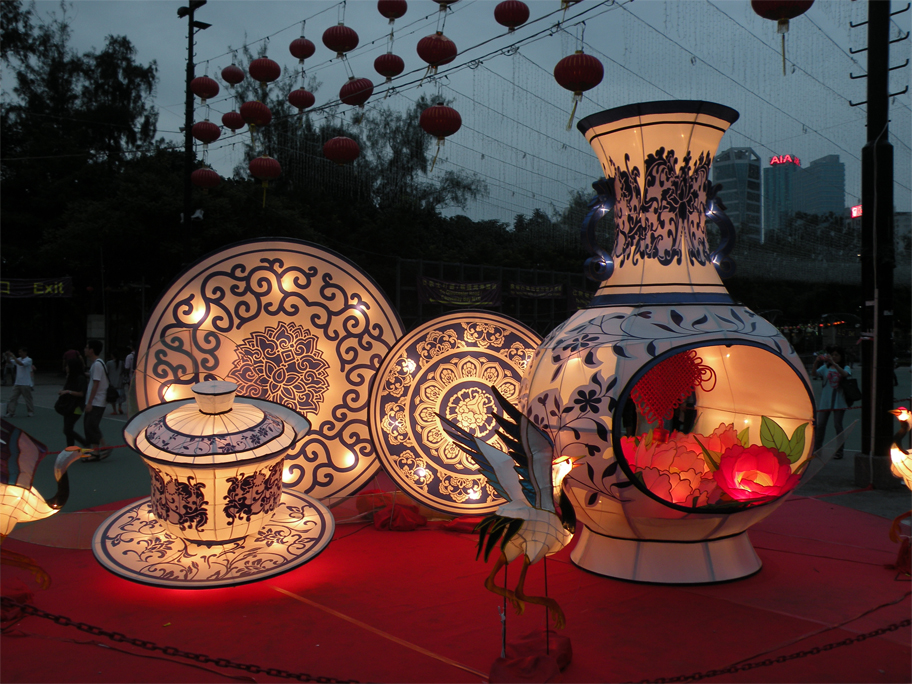 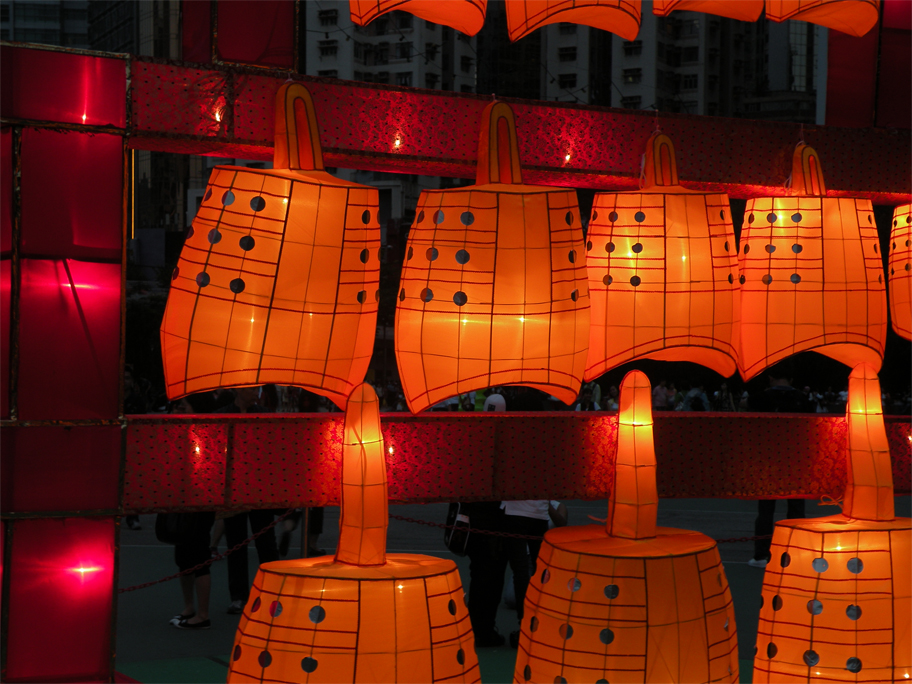 We followed the overhead lights to the other side of the park, where a vast assemblage of mythical creatures awaited us.  Surrounding an ornate, larger-than-life lantern, there were dragons, Chinese griffins, and what seemed to be a very fat phoenix. My favourite one of the bunch was a lovable dog-like creature. It seemed to have the body of a lion, but its friendly eyes and furry cheeks made me think otherwise.

It was a great thing that we had stumbled upon this on the second day of the festival; if we had gone the previous night the park would have been jam-packed with families. Instead the crowds were fairly light, allowing us to amble freely around the displays. 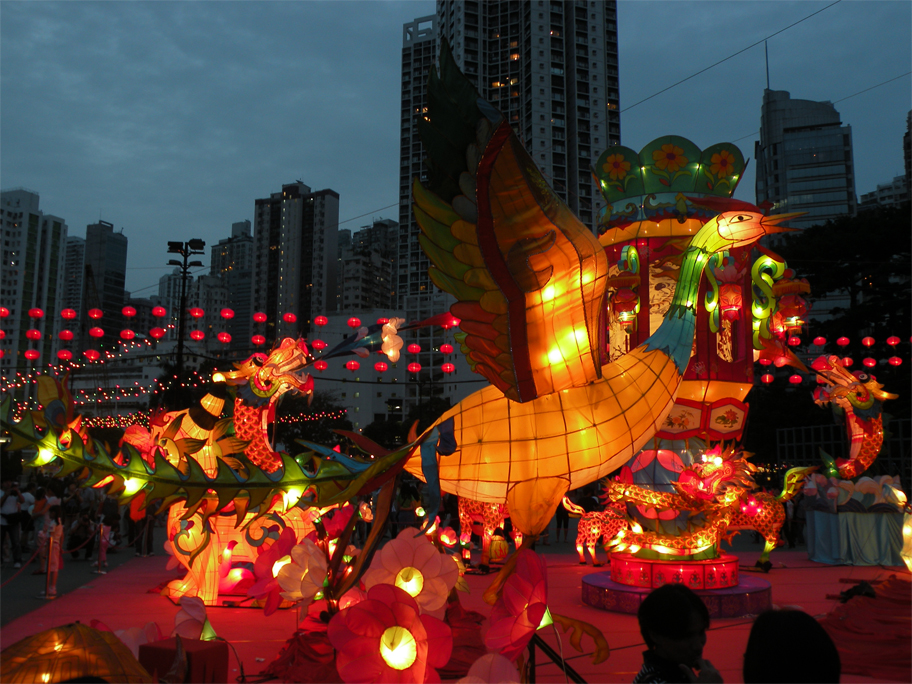 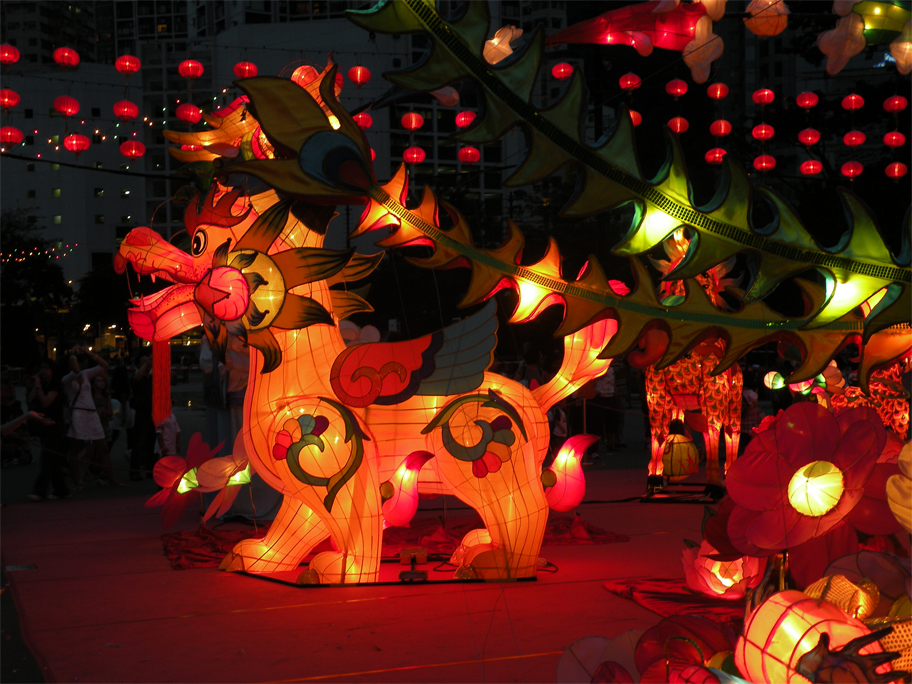 Apart from the rows of ubiquitous red lanterns, we were drawn towards a glowing wall of ones in yellow, pink, orange and green. Though it is the most generic kind of paper lantern, often seen in Chinatowns and Chinese restaurants around the world, there is an undeniable timelessness in its bulbous form.

Perhaps it is the shape, or the delicacy of the fine ribs that hold it together. Or maybe it’s down to the translucent quality of the fabric and the fragile decoration at its base. Either way it has become a well-recognised and enduring symbol of Chinese culture, an object that is at once both mysterious and alluring to the Western eye. 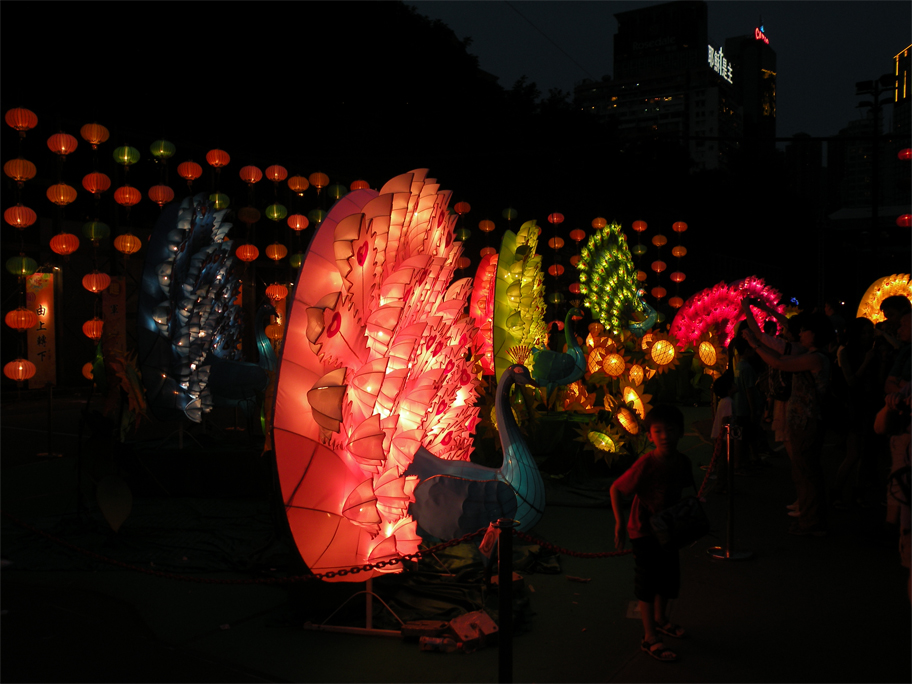 Directly in front of the wall of lanterns, there stood a row of dazzling peacocks, a visual feast that was practically overpowering in its bright colour and artistic detail. This was a little too gaudy for my liking, but the scene was hugely impressive nonetheless.

Before long we had returned to the rabbit where we first started. I did my best to tell Reba why it was standing in the middle of the moon-like opening.

“When the moon is at its fullest you can make out the shape of a rabbit on its surface, including the ears.” This I had verified on several moonlit walks back in England, but Reba seemed to be taking it with a bemused smile and a grain of salt.

From there we passed through the Central Library before reaching the edge of Tai Hang’s narrow streets. Draped with triangular yellow flags and already hosting a winding crowd of would-be spectators, the main parade route was developing an air of anticipation. 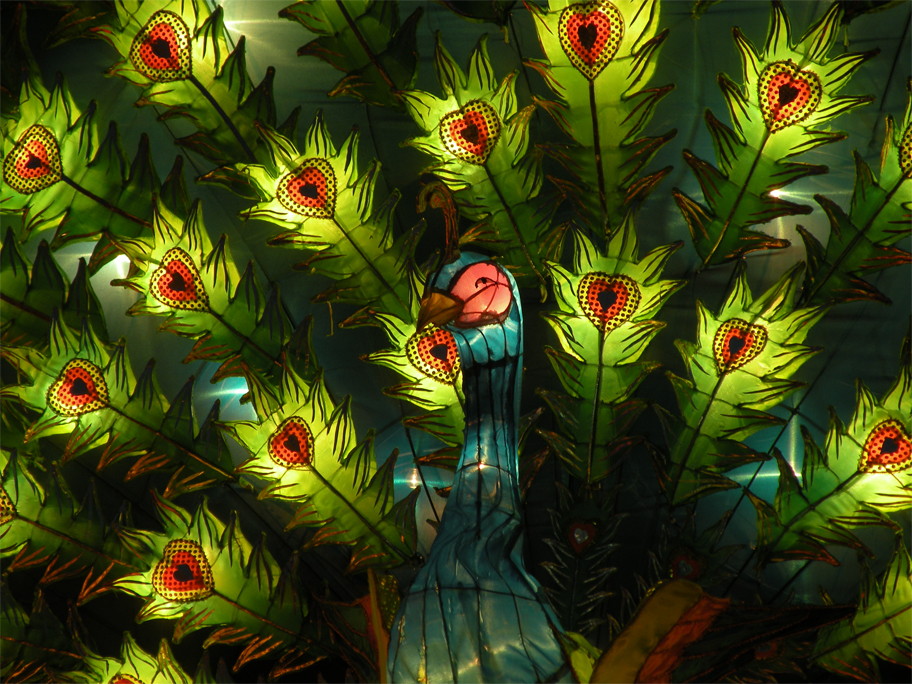 Back in 1880 the area was a peaceful Hakka village that subsisted on farming and fishing. Like most other early settlements in the nascent colony, its people continued a way of life that had persisted for centuries.

Just before the Mid-Autumn Festival a python wandered into the village. The residents promptly had it killed, but when the sun rose the next morning its body had mysteriously disappeared. Within a matter of days, Tai Hang would suffer two calamities in quick succession. A fierce storm battered the territory and an outbreak of plague broke out in the village, killing 10 of its residents.

One night the village elder had a dream where Buddha instructed him to light firecrackers and parade a fire dragon through the streets – this was to be done for three consecutive nights over the Mid-Autumn Festival. It’s said that the sulphur released from the firecrackers drove away the disease, and to this day the people of Tai Hang hold fire dragon dances every year to commemorate those events. 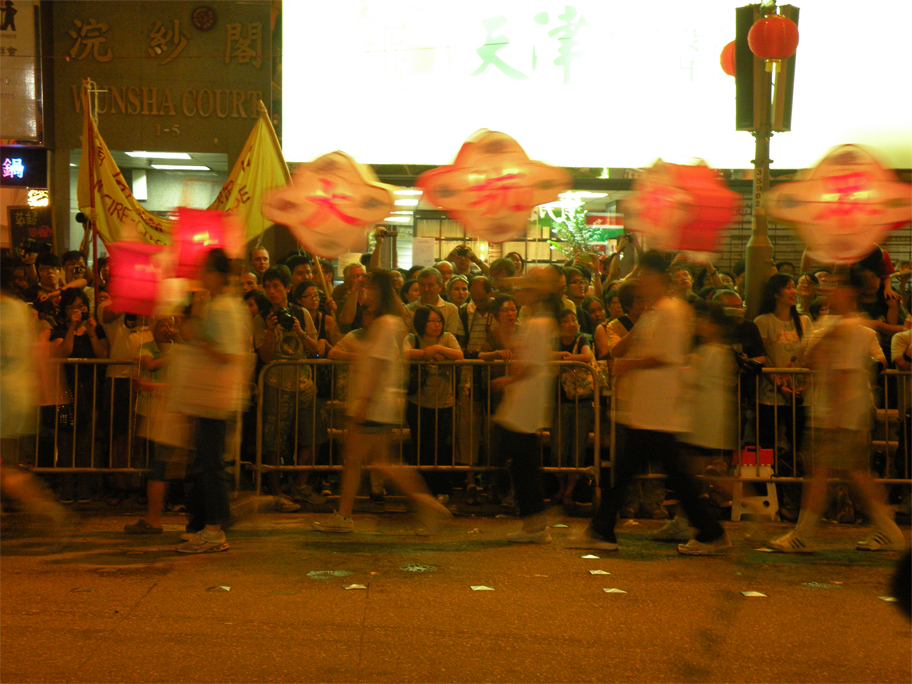 Like Reba, Justin and I were both first-timers to the parade. Despite living on the island for a good 15 years, we had never seen this spectacle firsthand. The truth was that I didn’t even know about it up until two years ago.

We arrived between 30-40 minutes before the Dragon Dance was due to start, and just like my experience at Las Fallas back in March, the three of us managed to secure positions in the second row. The festivities began with some non-stop drumming and the clash of cymbals. Young Tai Hang residents, both male and female, took turns beating a large drum festooned with ribbons and LED lighting.

Uncharacteristic of Hong Kong, the parade started nearly an hour late. And so we waited, huddled among the camera-wielding masses, taking relief in the occasional breeze and the cool autumn air. Despite the city’s reputation as a highly time-conscious society, I was impressed that the crowd was waiting quietly and patiently for the dragon to appear. Eventually we heard cheers and excited cries emanating from the far end of the street. Looking up, we saw our first glimpse of the Fire Dragon, a moving, slender mass glowing with flickers of orange. 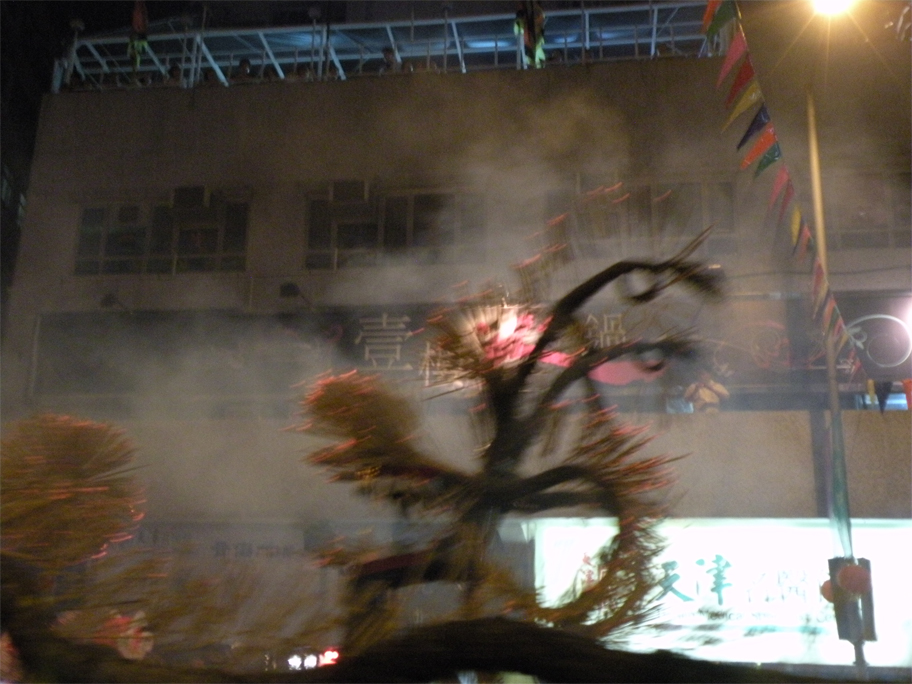 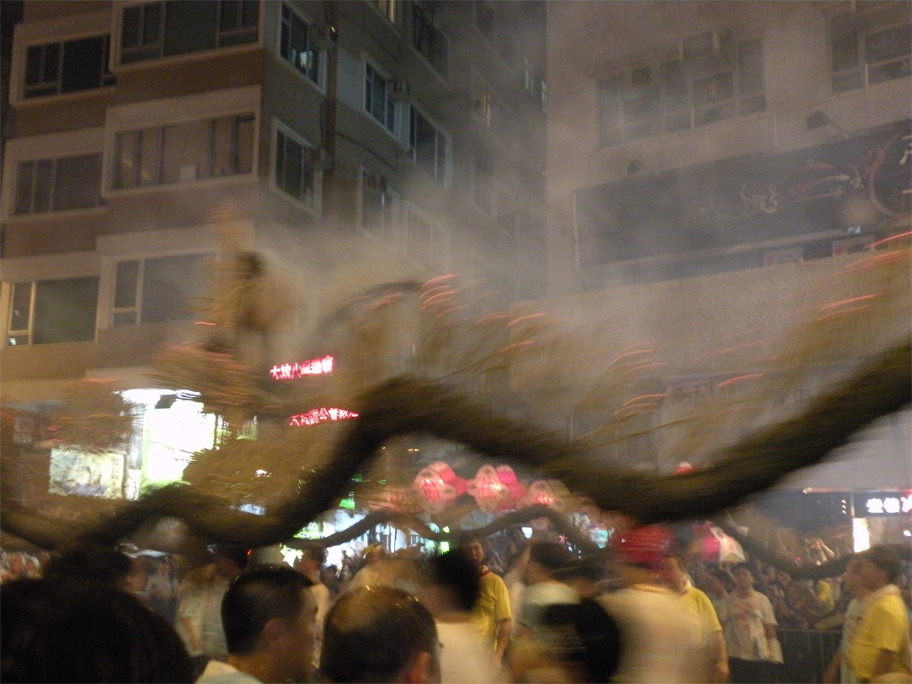 After what seemed like an eternity the dragon finally sauntered down our end with bursts of confetti. Accompanied by a thick cloud of smoke and banging cymbals, it was an extraordinary sight. I had an idea of what to expect but this was far above my expectations. The dull aching in our feet had all but disappeared, and one and a half hours of waiting suddenly evaporated in the midst of the crowd’s collective oohs and aahs.

I hoisted my camera to take a photo but I found that I could not. Within the space of two short seconds I had been enveloped in a sea of black gadgets. All around me arms were raised to take pictures – holding everything from mobile phones and small cameras to the biggest heavy duty SLRs.

Right in front of us the dragon continued to twist around itself, as though it were chasing its own fiery tail. The heaving crowds and the incense smoke were a little too much for Reba, who eventually fled to the back for some fresh air.

Justin and I remained close by the barriers, mesmerised by the dragon’s movements and the swirling patterns of lit incense. Neither of us were deterred by the thick smoke; if anything the strong smell of incense was a comforting one – it reminded me of summers when we would light similar-smelling coils to ward off hungry mosquitoes. 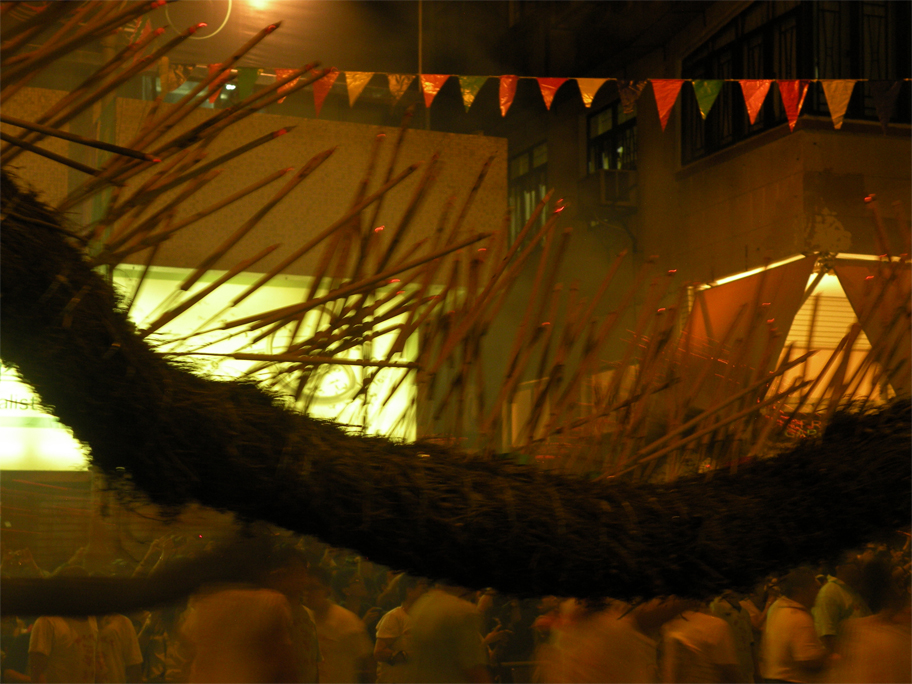 Before we knew it the dragon had zipped down another street, leaving a hushed, dispersing crowd in its wake. Just as we were about to leave we heard what we thought were bagpipes. Turning around, we saw a troupe of musicians decked out in full Scottish finery, and they marched down the street in a throwback to the colonial years before ’97. This was another surprising combination that you would find only in Hong Kong – which other place would feature both a dragon dance and a troupe of bagpipers in the same ceremony?

After a few more minutes of soulful bagpipe music, Justin and Reba looked set to go. They were very tired from the long wait, and we still hadn’t eaten dinner even though it was well past 9pm. It was a little bit tricky trying to leave the village – the pavements of the narrow streets were still choked with people in anticipation of the dragon’s return.

On our way out we got one final glimpse of the Fire Dragon as it ran down a side street, with a legion of revellers chasing its tail. I was clearly going to miss this on my return to Europe.