I could never claim to be a morning person, but somehow my last day in Lisbon began shortly before 8am with some soft rays of sunshine peeking through the shutters. Outside, a blue sky beckoned and the scene resounded with a silence I had not experienced since arriving in the city. It was Monday morning on a public holiday and the streets were practically deserted.

By 8:30 I had left the hostel to catch the #28 bus to Belém, retracing the route we had taken the previous day. This time there were no parked cars outside the Jerónimos Monastery, so I ended up taking far too many pictures within the space of 10-15 minutes. On the way to the waterfront promenade a pedestrian tunnel echoed with the haunting strains of fado – it was the voice of a middle-aged busker singing in the shadows. 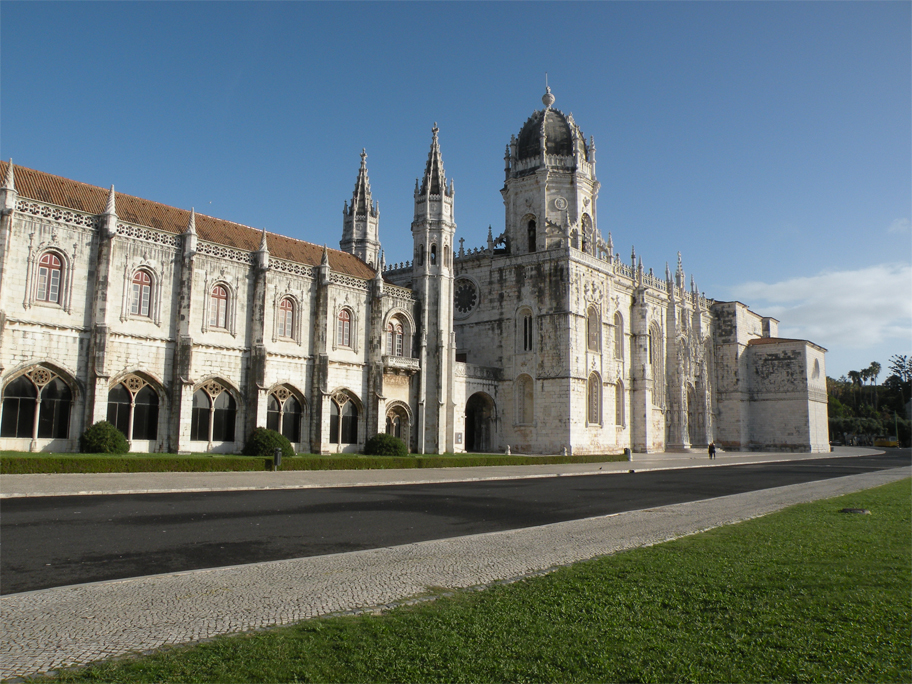 My destination was the Torre de Belém, an iconic symbol of Lisbon and a prominent example of Manueline architecture. Through the trees I marvelled at its white stone glowing in the morning light; from afar the tower appeared to be a treasure box on the edge of the ocean. I will always remember the magical moment I had when I stood up close, with the waves lapping just below my feet. For once I had beaten the late morning crowds.

As I left groups of women hawking traditional Portuguese shawls began to arrive. And then I understood why the tower wasn’t on the itinerary of our alternative day trip – it was perhaps the most obvious place where visitors would go.

Now the real reason I came back to Belém was to have breakfast: and a rather indulgent one at that. Imagine 4 individual Pastéis de Belém, dusted with sugar and cinnamon – each one an exercise in sweet perfection. Imagine that they are all on a plate and the plate is all yours. There is no fighting over the last piece, no discussion over who gets what. There is only one place in all of Lisbon – scratch that, all of Portugal where you can find traditional egg tarts (pastéis de nata) of such high quality; and it is just up the street from the Jerónimos Monastery. Easily identifiable by the long queues snaking outside its doors, the Casa Pastéis de Belém has been delighting the taste buds of locals and tourists alike since 1837.

With my stomach full I hopped back onto the tram towards the hostel. It was time to pack everything up and rendezvous with the rest of the gang. After checking out and leaving our bags in the storage room, we set out for one final walk around town.

While the area around our hostel retained a gritty, edgy charm, the district of Chiado is a gentrified version of Lisbon, with a large assortment of well-kept squares and genteel designer shops. Beyond the ruins of the Carmo Convent – now home to a small archaeological museum – a pathway led us onto the Elevador de Santa Justa, a curious structure built at the turn of the 20th century.

Decorated in a fanciful neogothic style, the elevador contains 2 lifts connecting the lower town, Baixa, with Chiado’s Largo do Carmo (Carmo Square), navigating an astonishing height difference between the 2 neighbourhoods. I don’t know what it is with French engineers and quirky iron structures, but this tower was designed by a certain Raul Mesnier de Ponsard. 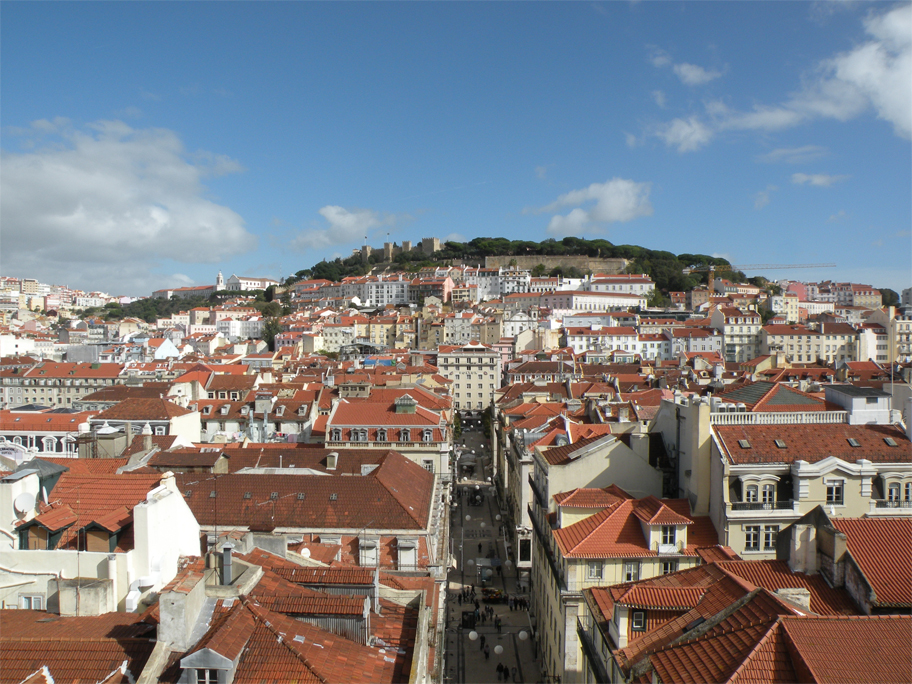 Without having to pay an entry fee for the upper terrace, you can still enjoy spectacular views towards the Castle of São Jorge and the river. The lift mechanics looked somewhat old and antiquated, so we decided that it was more fun to take the long way down, but not before dropping by the local branch of Santini for another round of show-stopping Italian gelato. 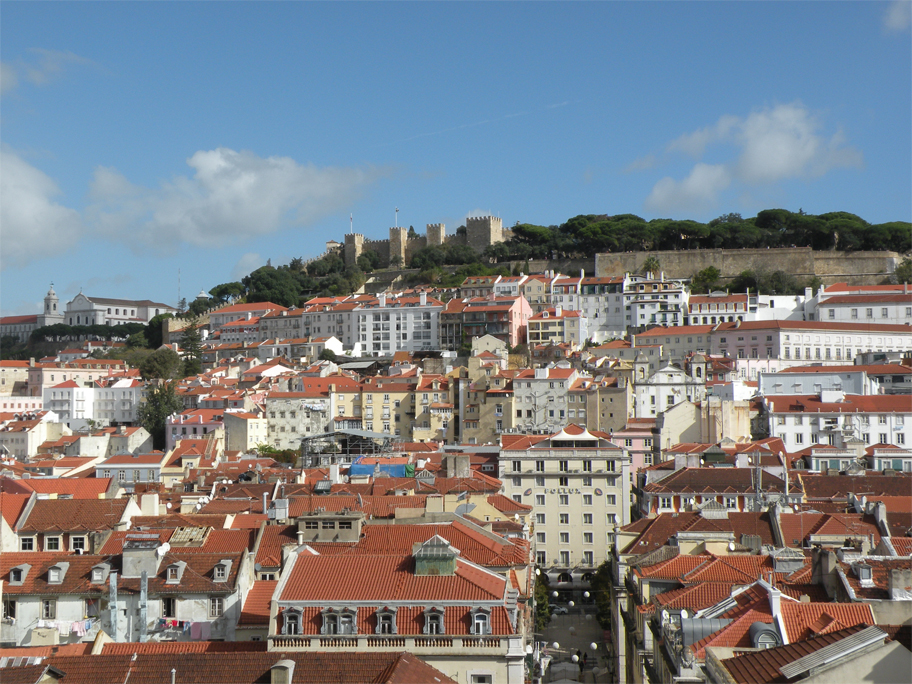 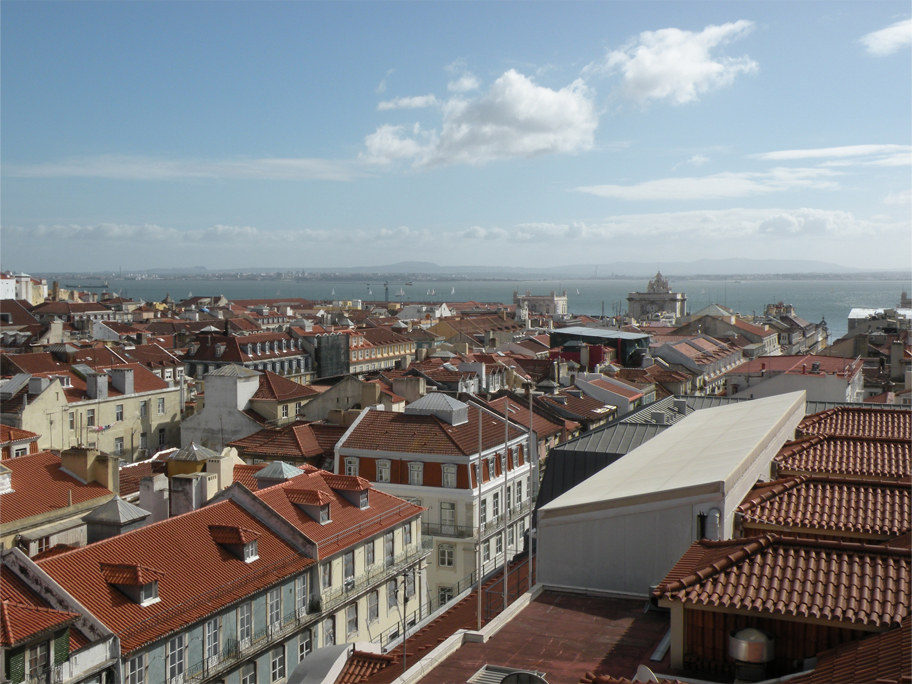 Eventually we ended up in Rossio, a monumental public square fronted by a grand theatre and rows of elegant townhouses. Undoubtedly the most popular meeting spot in the city, Rossio has been the setting of celebrations, executions and popular revolts. From the corner of the square we ambled down the impressive Rua Augusta, Baixa’s main street, towards the triumphal gateway at its end. 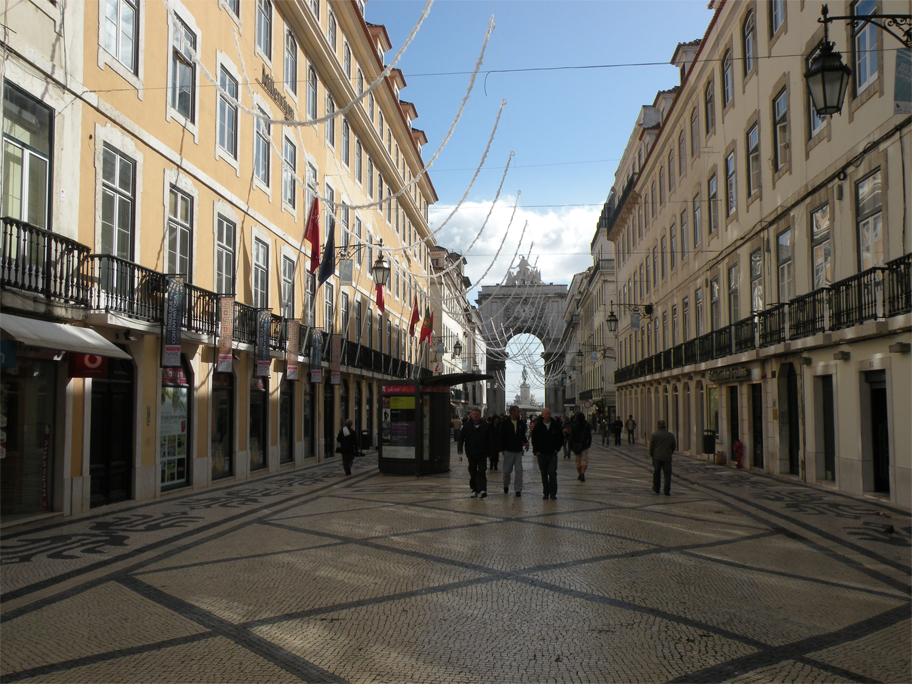 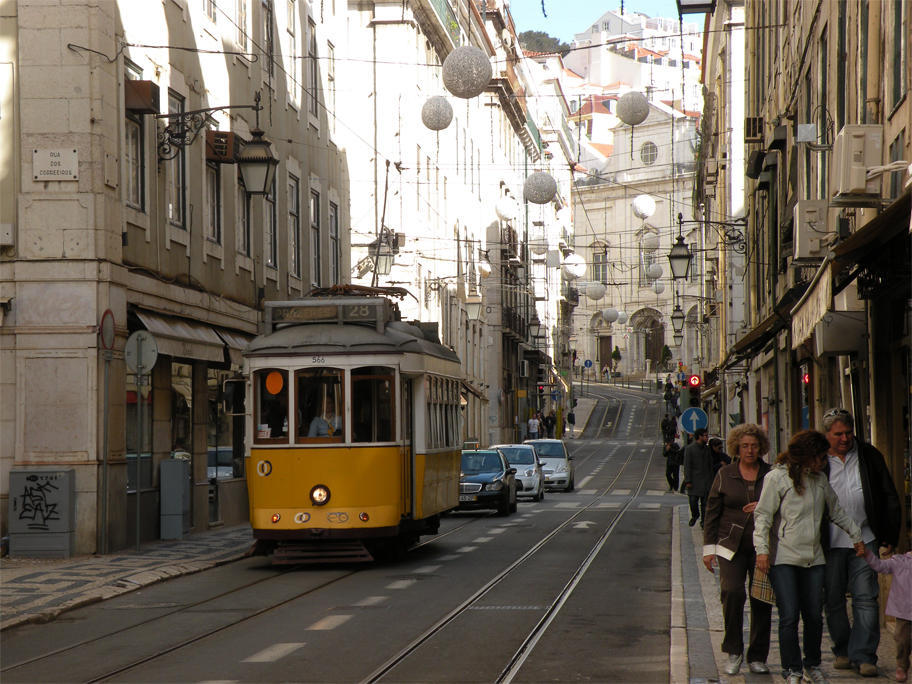 Beyond the enormous arch lies the Praça do Comércio, an awe-inspiring square facing the Tagus River. Punctuated only by an equestrian statue of King José I, the vast space is surrounded by arcaded buildings painted a cheery yellow colour. Up until the earthquake of 1755 this was the location of the Royal Palace, but the city’s near-total destruction allowed for a complete remodelling of the lower town according to Enlightenment principles. 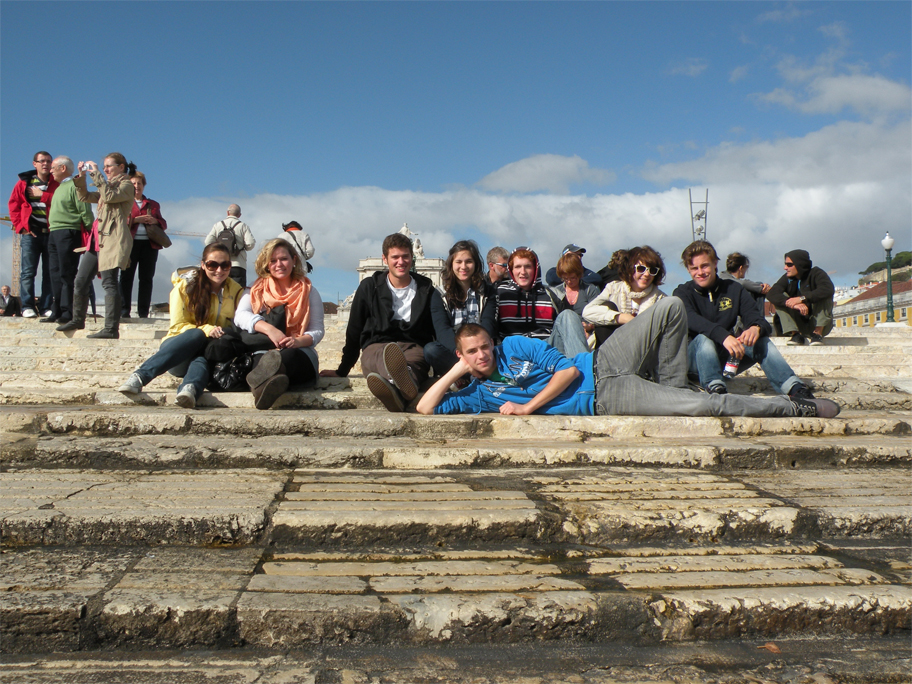 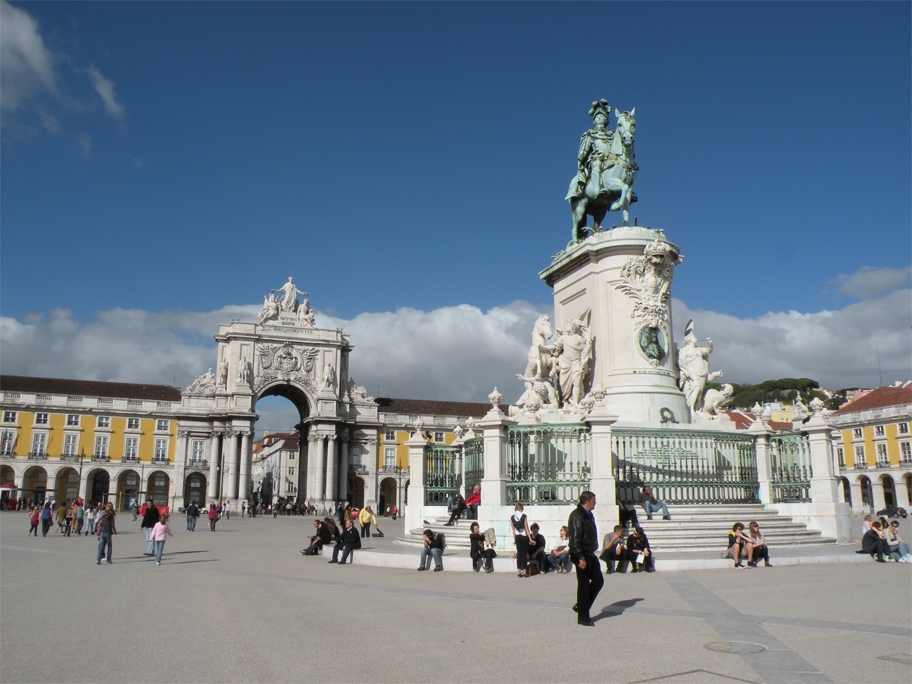 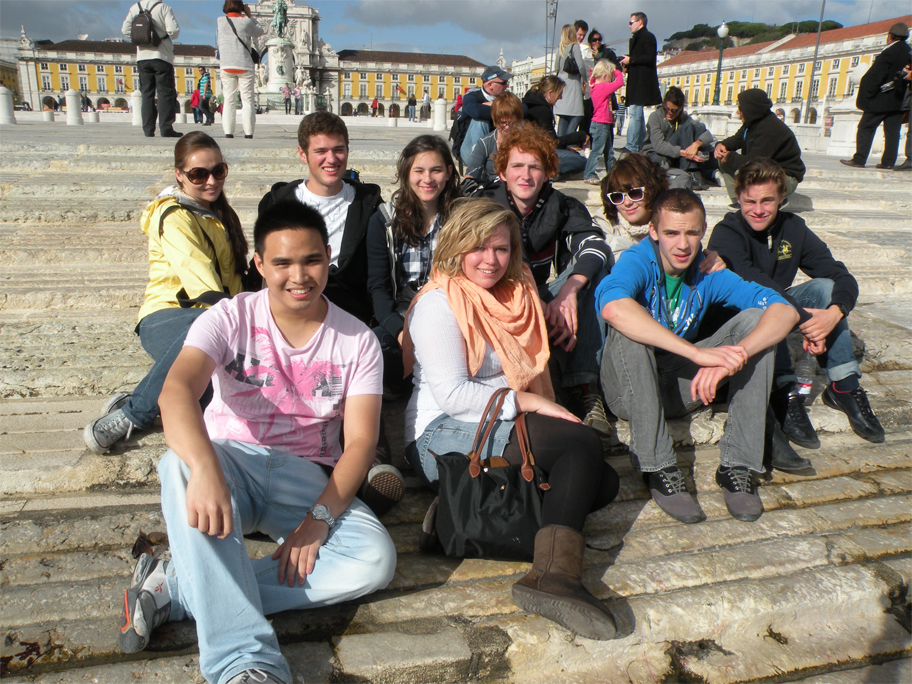 It was here that we sat down, on the ceremonial steps leading down to the river, for some final group pictures to wind up an amazing trip. Our last meal in Lisbon took place at a nearby Portuguese & Italian restaurant, where I had the house specialty of Bacalhau à Brás – a delicious mixture of salted cod shreds, onions and thinly chopped potatoes bound with scrambled egg.

The only problem was that we were rushed for time. Our train back to Salamanca was due to leave at 4:30 and it was already past 3:35. From Rossio we jumped into a cab, picked up our bags at the hostel, and sped back across town towards the train station.

In the end we made it to Santa Apolónia with less than 15 minutes to spare. In the shadow of my travel companions, I walked down the platform in a daze, half-wondering if this long weekend was just a dream. I had finally discovered the ‘other’ part of Iberia, and I was totally and utterly smitten.