The Journey to El Teide. 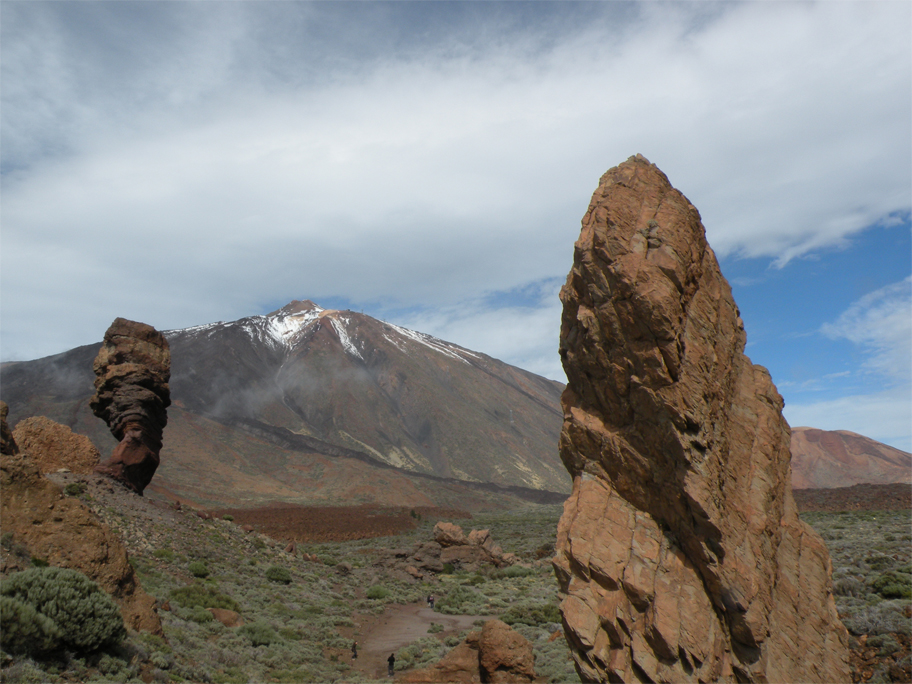 My first impression of Tenerife was not of a beach, nor of palm trees and coastal resorts. Instead it was a sea of clouds and then the sudden appearance of a conical peak, dazzling in its beauty and draped in a layer of freshly fallen snow. I instantly thought of Mt. Fuji but there was something about this mountain that made it even more alluring.

Like Mauna Kea on Hawaii’s Big Island, El Teide is a seasonally snow-capped volcano that stretches a whopping 7,500 metres from its base on the ocean floor. At 3,718 metres above sea level it is also the highest point in all of Spain.

Because of its prominence the mountain has long been synonymous with the island itself. The Ancient Romans named Tenerife “Nivaria” in reference to its winter snows; medieval maps called it the “Island of Hell” on account of its volcanic activity; and its modern name is derived from the words Tene(white) and ife (mountain), a description given by the native benehaorits of nearby La Palma.

Ever since I sighted El Teide I knew that we had to visit it before leaving the island. Bas and Caroline thought the same, so on our last day we woke at 7:00 to catch the guagua down to Puerto de la Cruz, the starting point of the scenic bus ride to Teide National Park. After jostling on board with a horde of Spanish cyclists (by far the rudest people we encountered on Tenerife), and seeing the angry faces of frustrated German hikers, we finally secured our seats for the 90-minute journey.

The journey into the heart of Tenerife was nothing short of extraordinary; we passed banana plantations and vineyards before zipping through a beautiful pine forest at the top of the valley. High winds had closed the road the previous day so we were lucky to be on this bus – every now and again we would pass large patches of fallen trees. Eventually we emerged out of the forest and into another world. Suddenly the landscape became barren and rocky; we passed a series of cinder cones, following a serrated ridge across a vast stretch of land in red ochre. It was as though we had been transported to Mars. 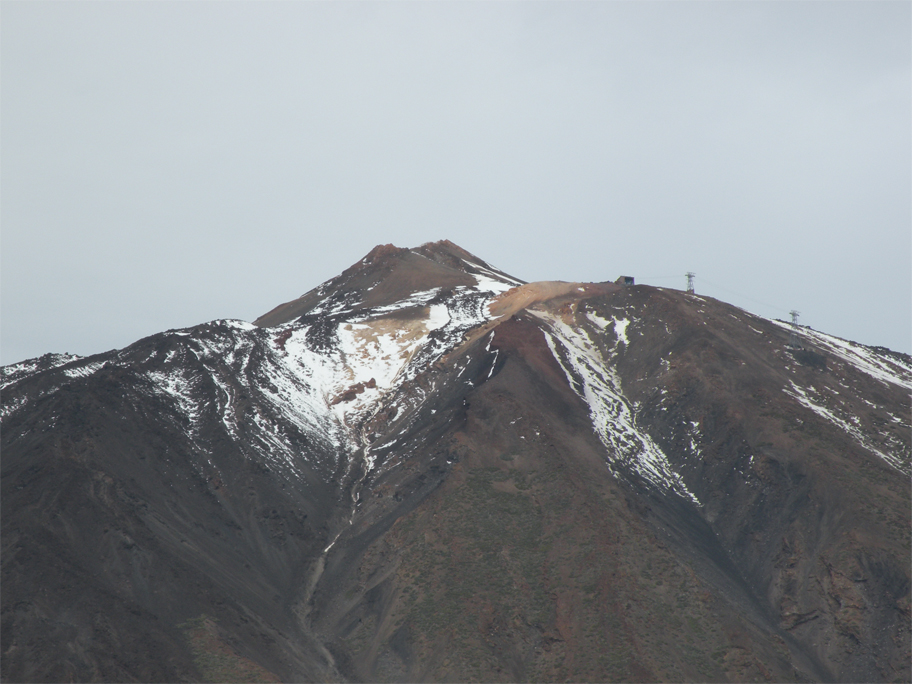 Manfred had warned us that the island’s interior was potentially cold and foggy, but so far the weather was holding up. The one indicator that proved otherwise was looming in the distance: a low cloud, grey-white in colour, seemed to be blowing in from the far side of the caldera. It seemed to be quite a while away so I was still optimistic when we pulled up to the cable car station under a beautiful blue sky. The midday sun was bright as ever and I could see El Teide’s summit in clear focus.

So far so good, I thought, until we drove further on – right into the grey cloud. Suddenly the visibility dropped and raindrops began streaking across the windows. When we arrived at the Parador Nacional just 5 minutes later there was no visible trace of the spectacular scenery we had just seen.

I was hoping to get some more hiking done but the weather clearly had other ideas. Over a warming plate of conejo en salmorejo (rabbit stew) and patatas arrugadas – the Canary Islands’ ubiquitous wrinkled potatoes – we decided to wait out the rain in the comfort of the parador. After all, the bus didn’t leave until 4:30 and that wasn’t for another 4 hours or so.

Sure enough, the clouds slowly began to lift, revealing a series of strangely-shaped rocks and the unmistakable silhouette of the volcano. Even before peak season (pardon the pun) there’s no hiding from the popularity of El Teide; the mountain and its surroundings recently became the most visited national park in all of Europe.

Across the road from the parador are the rock formations known as Los Roques de García. This is where all the visitors flock to take that postcard photo of the volcano, but there are pockets of solitude if you know where to look.

From a high viewpoint we spent a good part of an hour marvelling at the sheer scale of our surroundings. On one side the ridge dropped down to a vast crater filled with lava beds, and on the other the parador sat like a toy house amidst a large bowl of scrubland. We made ourselves comfortable and gazed towards El Teide, entranced by its game of hide-and-seek with the passing clouds. 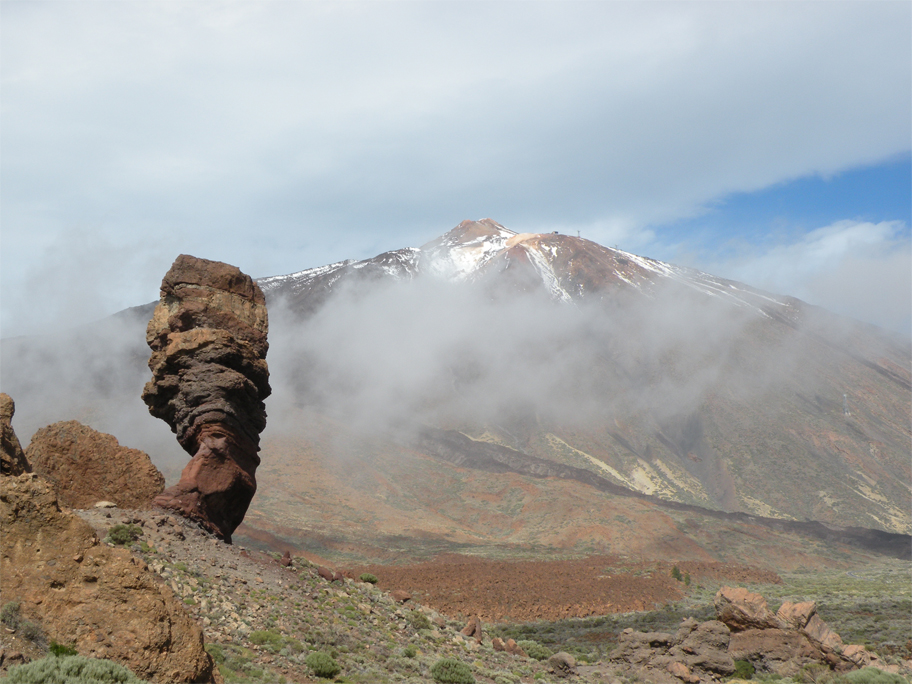 After a botched attempt to capture Bas and Caroline in a jump shot, we hopped back onto the bus to La Orotava for an early dinner. As it was only 6 o’clock on a public holiday almost nothing was open, so we ducked into a small diner for a round of hot dogs and French fries. I secretly wanted something Canarian for my last meal of the trip but in retrospect the comfort food was definitely satisfying.

With our stomachs full we split up and I went for one last stroll around town as night fell. There was no denying the magic in the air, or my dismay at having to leave such a beautiful place. From the road high above the botanical gardens I watched the sky turn darkening shades of purple. Out of all the islands I had been to, Tenerife had become a quick favourite. 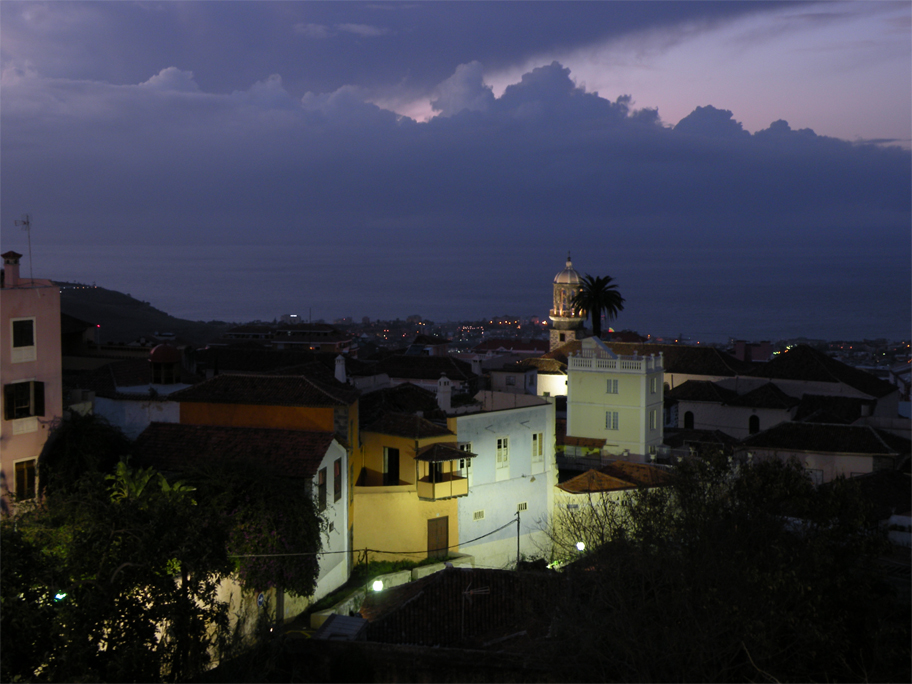 Later that night we gathered a few of our hostel mates for farewell drinks at Los Compadres. Among them there was Paul, the travel-savvy Californian who had lived all over Southern Europe, and Janna, the offbeat bookseller from Berlin who was rounding off a 2-week sailing trip around the nearby islands. Over roasted chestnuts and Tajinaste wine we talked about anything and everything, as though we had already known each other for years. 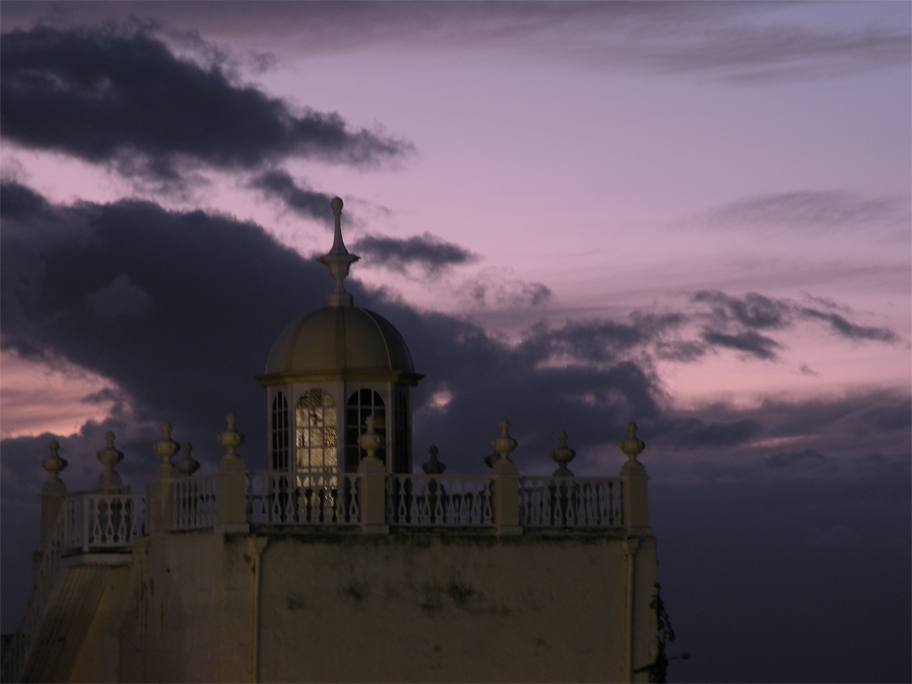 It was time to say goodbye to Juan, the proprietor who had demonstrated such a show of Canarian hospitality on our very first night. With a firm embrace we promised to come back again someday. Janna had the brilliant idea of taking away a bottle of Tajinaste, so we continued the party on the hostel’s roof terrace. Let me tell you that there is nothing quite like having a glass of wine under the stars – with a wide smile and lots of laughter, we bid farewell to new friends, new places and an island paradise that we had come to love.