Waiting for the Sun, Hong Kong.

Sometimes life is all about choosing the crazy option. Whether it’s taking spontaneous trips just days before an important deadline, or moving to a country with barely 5 months of the local language, it makes things a heck of a lot more fun. So when an old friend asked if I wanted to see the first sunrise of the New Year, I inevitably said yes.

After an unconventional and sushi-filled New Year’s Eve, 2011 began with a near-impossible start at 2:30am. Even though it was a new decade I had forfeited the midnight countdown in favour of a three-hour power nap – a decision that would prove crucial in the later hours of the morning.

By 3:30 I was standing on an MTR platform waiting for the next train towards our rendezvous point in the new town of Tseung Kwan O. The train would be full of people going home from the festivities but for me things had only just begun.

When I finally got there I was in for a surprise: what started out as 8 or 9 confirmations had swelled to a group of more than 20 members in different stages of sleep deprivation. Ever the organised leader, Monique assigned us each a number, handing us A3 maps of our destination in black and white. 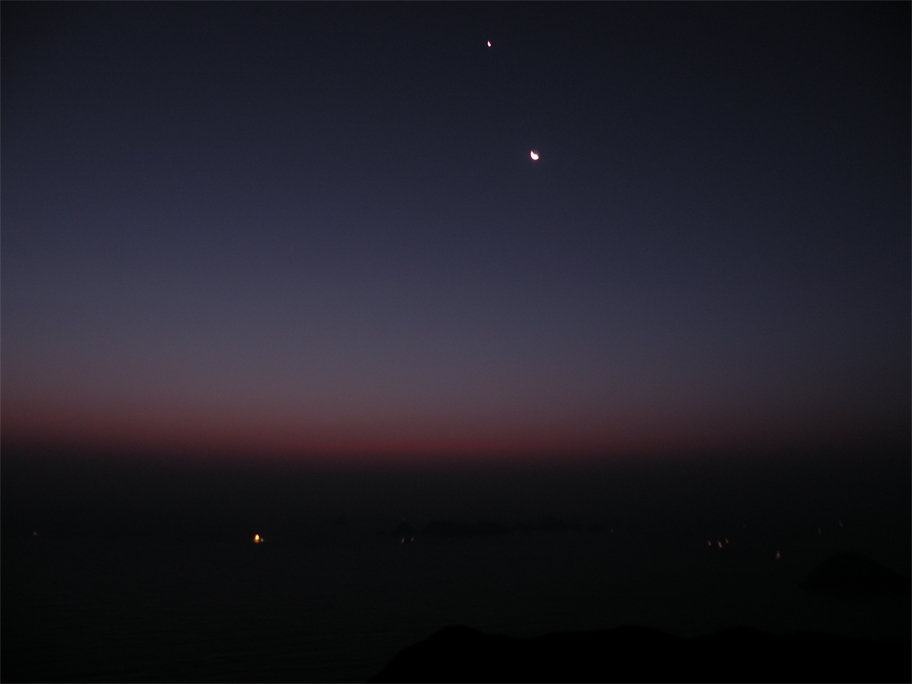 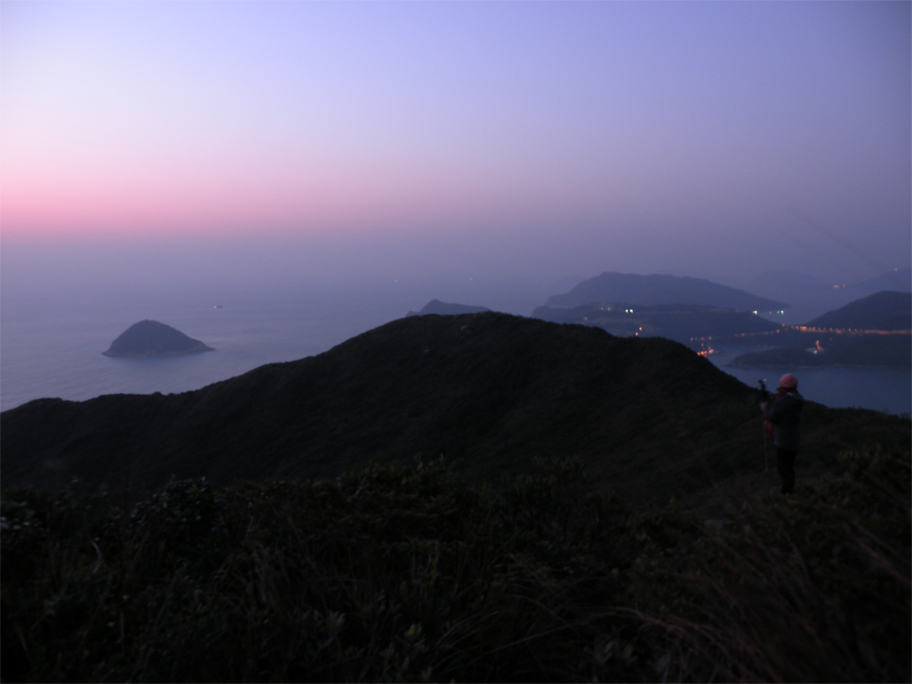 We arrived at the foot of the hiking trail by taxi, a major plus because it meant that we had plenty of time to spare before the sunrise. In the dark we cautiously began climbing the hill, illuminating each step by the light of our torches.

What makes these little trips for me is meeting new people from different parts of the world. By this point I was chatting with Isaac, a college friend of Monique’s who was now in his third year teaching English in Japan. When he discovered that I was studying in Salamanca the unthinkable happened – suddenly I could hear the flow of fluent Castellano from his lips. I hurriedly reactivated the Spanish part of my brain and responded the best way I could.

Before you could say “buenas noches” we had already reached the summit of the hill. Far from being alone we were joined by a number of keen photographers, all equipped with tripods and fancy cameras. In a show of true dedication someone had even camped out in a tent, a wise decision considering how cold it was on the mountaintop. 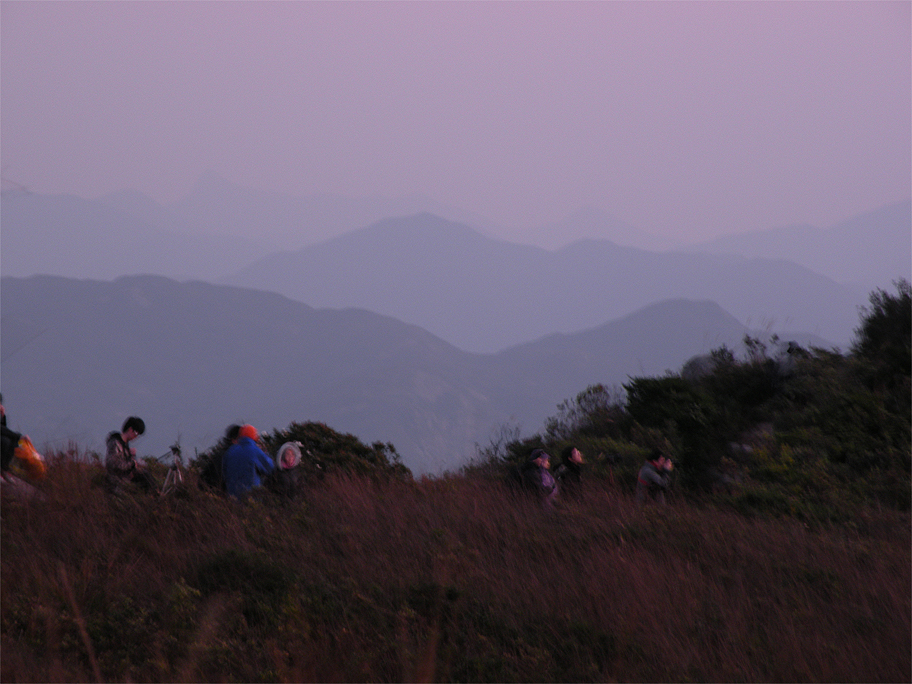 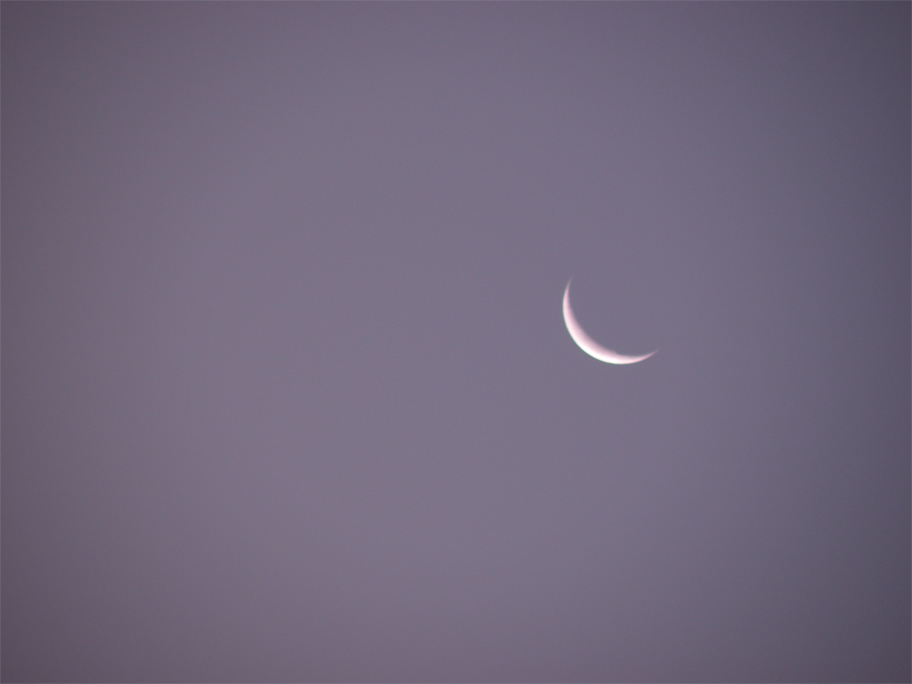 For two hours we sat on a large rock, passing the time in conversation while munching on a bag of dried mango. Around us the sky turned gentle shades of blue and then purple, a vivid contrast to the dark islands in the distance.

Eventually we got past 7:00am but there was still no sign of the rising sun. The atmosphere became a mixed bag of hopeful anticipation and carefully-guarded despair. As thoughts of a warm bed filled my mind I began to wonder if the sun was ever going to show up through the layer of winter smog. And then it happened: the tiniest trace of faded orange – semicircular in shape – started to peek over the blue-grey mist.

Immediately a collective wave of excitement broke over the crowd, followed by a steady stream of click-click-click. I sprawled back on the grass and lifted my camera towards the unfolding scene. Totally enthralled we watched as the sun rose out of the distant clouds, a flaming red beauty eager to take its place in the heavens. 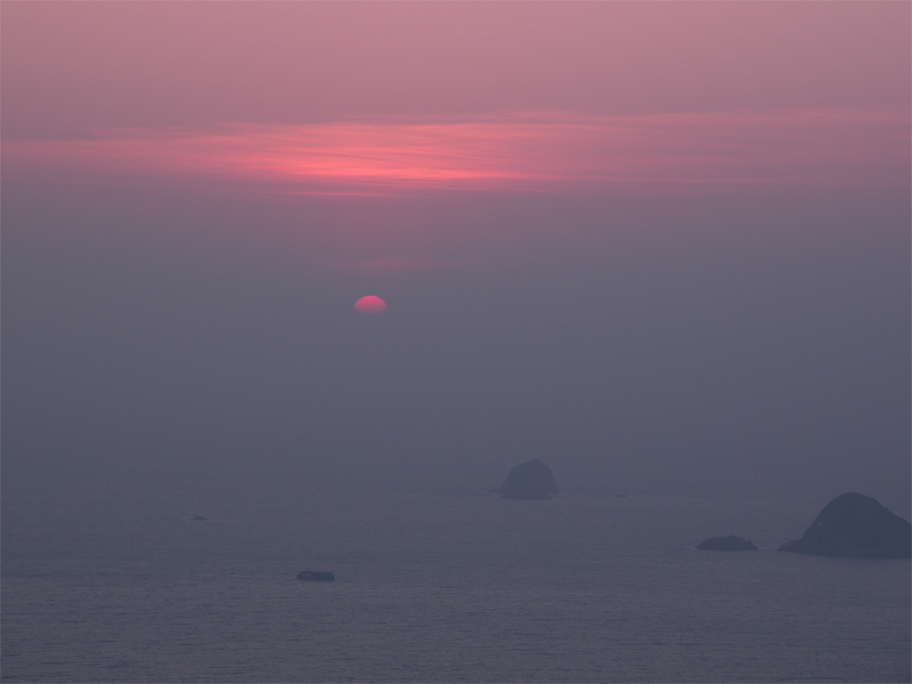 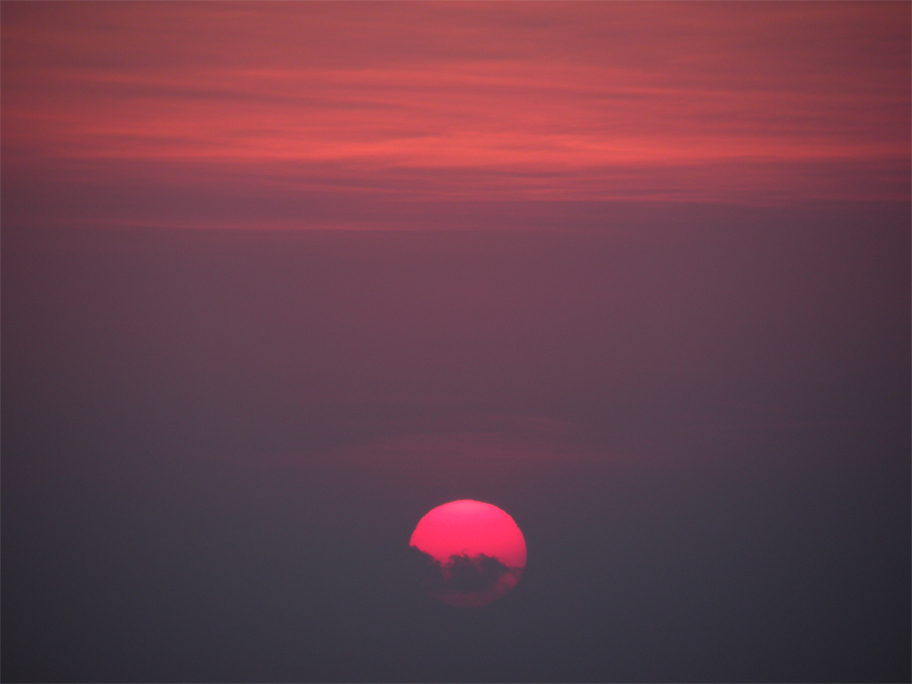 In that moment all the sleep deprivation, tiredness and bitter cold became worthwhile. With firm handshakes and bright smiles on our faces we exchanged stories from as far afield as England, America and Australia. Among the group it seemed as though everyone had had the same experiences of living abroad.

A couple of old friends reappeared from the back of the hilltop, where they had been taking shelter from the cold. With the January sun behind us there was no way we could leave without taking a group picture – we had conquered the cold, a dark hill and most of all, our natural desire to sleep after a hectic day of festivities. 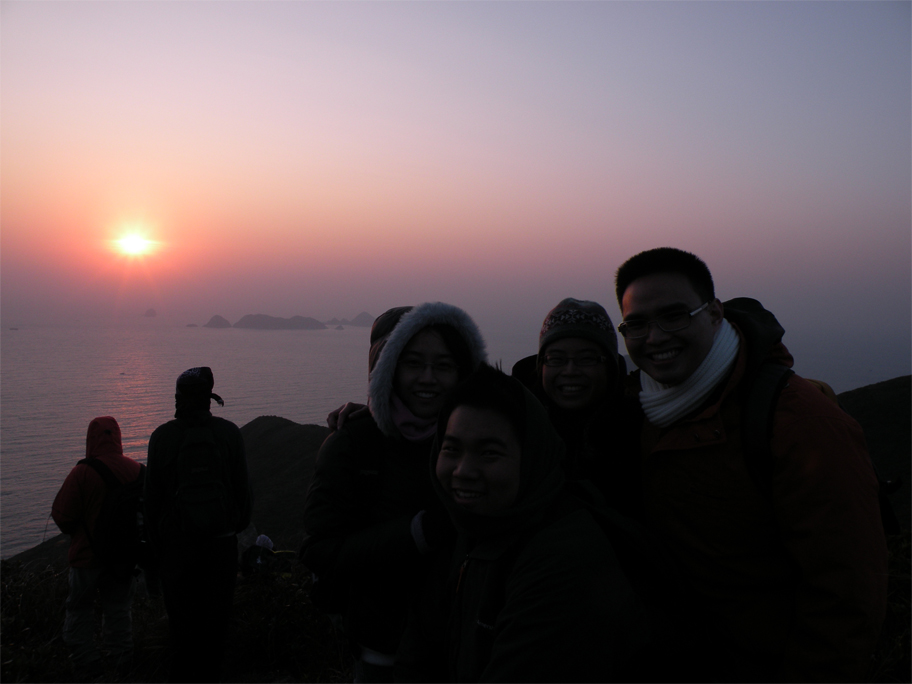 In search of breakfast we started our descent under a beautiful tint of faded indigo. Over the hills the skyscrapers of Hong Kong Island could be seen, their rectilinear shapes glowing faintly in the soft morning light. To one side zigzagging coastal inlets marched off towards the distance, their waters overlooked by townhouses clinging to the mountain slopes. As the sun began to bathe the slopes in a wonderful shade of yellow we turned and saw yet another secluded bay – this time graced with an empty white sand beach. Now that the sun was up there was no doubting the beauty of the surrounding countryside. 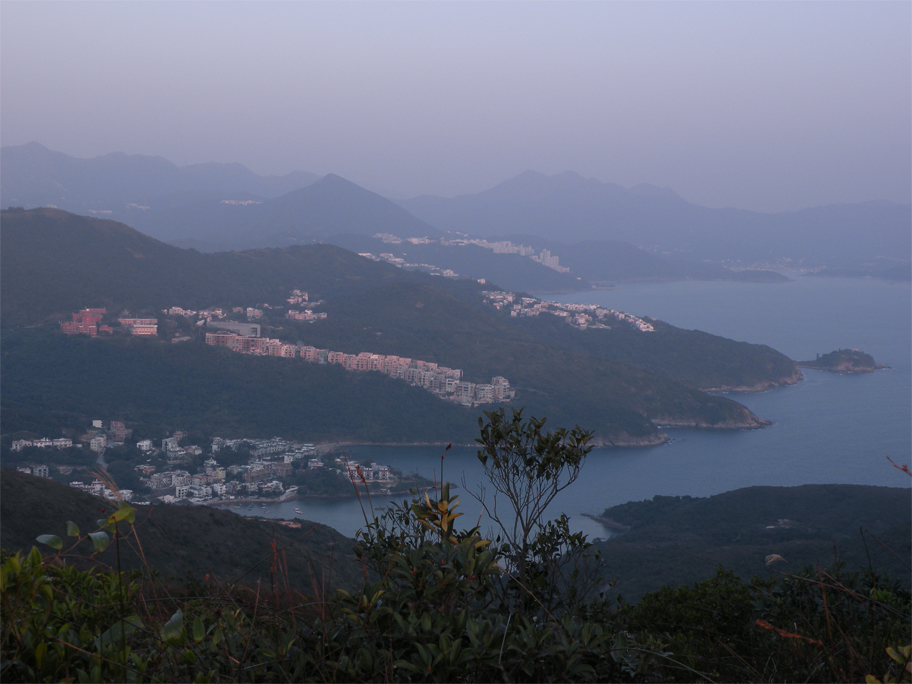 At the bottom of the trail we paused for a few games of frisbee before catching the double decker bus back to Kowloon. Trying my hardest not to doze off on its comfortable upper deck seats, I kept myself entertained with the changing scenery that zoomed past. By the time we got to the bus terminus at Diamond Hill, all of us were starving with hunger.

Following the directions of a friendly resident, we wandered over to a housing estate just across the road. On the periphery of a small playground a few elderly women sat enjoying the fresh morning air. With a smile we wished them a happy new year before ducking into a local diner, one of the countless cha chaan tengs dotted around the city. After witnessing the first sunrise of 2011, I could now look forward to a meal of sausages, eggs and noodles – all served in a steaming bowl of soup.