Valencianos love to blow things up.

As surreal experiences go, there is nothing quite like basking in the 27-degree sunshine, face-up in the grass as the park echoes to the sound of exploding firecrackers. It is the middle of March and the party is in full swing in Valencia. The occasion? A wild, raucous and noisy celebration known as Las Fallas.

Originating in the feast day of St. Joseph, the patron saint of carpenters, Las Fallas has since become one of Spain’s biggest and most popular festivals of the year. Hotels and hostel beds often sell out months in advance, and the ensuing madness means that most Valencians either love it or hate it.

For 21 days the city turns into a giant outdoor art gallery, with roads closed and intersections fenced off to make way for the fallas, a series of cartoony sculptures poking fun at well-known personalities and current issues. Made up of individual ninots, there are more than 400 of them dotted around Valencia. In the entire year leading up to the festival streets and neighbourhoods get together to raise money for the sculptures, vying with one another to win competitions in a wide range of categories. The most impressive fallas often hit the 20-metre mark, crowding the narrow squares with their gravity-defying component parts.

Aside from the vast displays of public art, Las Fallas is all about noise. In scenes that would be unthinkable in much of the Western World, small children play with pyrotechnics, gleefully lighting the fuse as their parents look on with smiles. Families conspire to blow things up on street corners, casually throwing the innocent-looking petardos every which way.

And the municipal government is in this too – every afternoon at 2pm the civic powers unleash what’s known as La Mascletà. For 19 consecutive days the Plaça de l’Ajuntament (Town Hall Square) shakes and rumbles to the deafening roar of co-ordinated fireworks and barrages of firecrackers. Many Valencians consider this the highlight of the festival, and it’s not hard to see why. 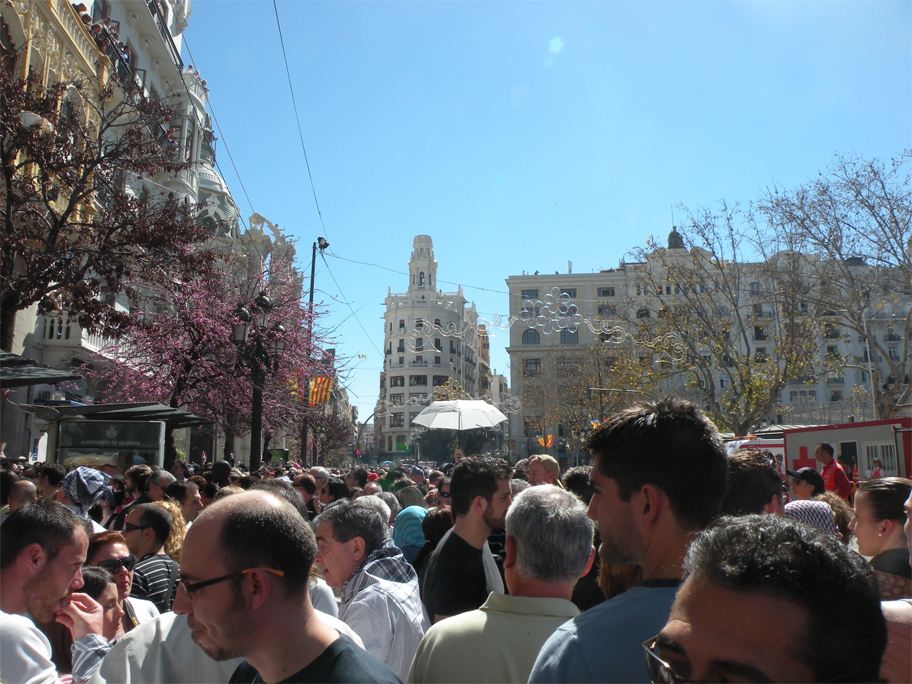 We arrive just over an hour before the event, managing to nab some good spots in 4th row. For one thing, there is no doubting the excitement of the crowd as the clock edges ever closer to the starting time. Over the din of clapping and expectant whistles, a small voice calls out from the city hall balcony. “Senyor pirotècnic, pot començar la mascletà!” (Mr. Pyrotechnic, you may begin the mascletà!) In a flash, the first trails of whistling firecrackers begin soaring into the bright blue sky.

BANG! BANG! BANG-BANG-BANG!!! WHEE…… BANG-BAR-RA-RANG!!! The orchestra of noise thunders across the square, building and gathering momentum with each explosion in a puff of white smoke. For the next 5 minutes we stand anchored to the ground, mouths agape and ears close to ringing, until the buildup to the grand finale. Accompanied by a contingent of red and green fireworks, the final, colossal bang is nothing short of spectacular. And then, a split second of stunned silence. With fists in the air the crowd lets out a momentous cheer and a wave of applause. 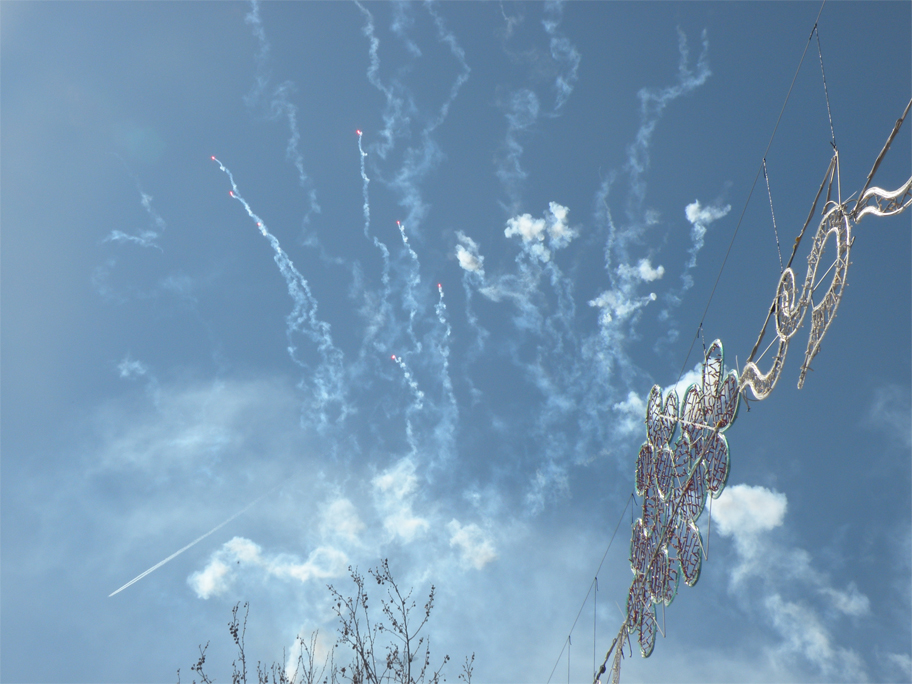 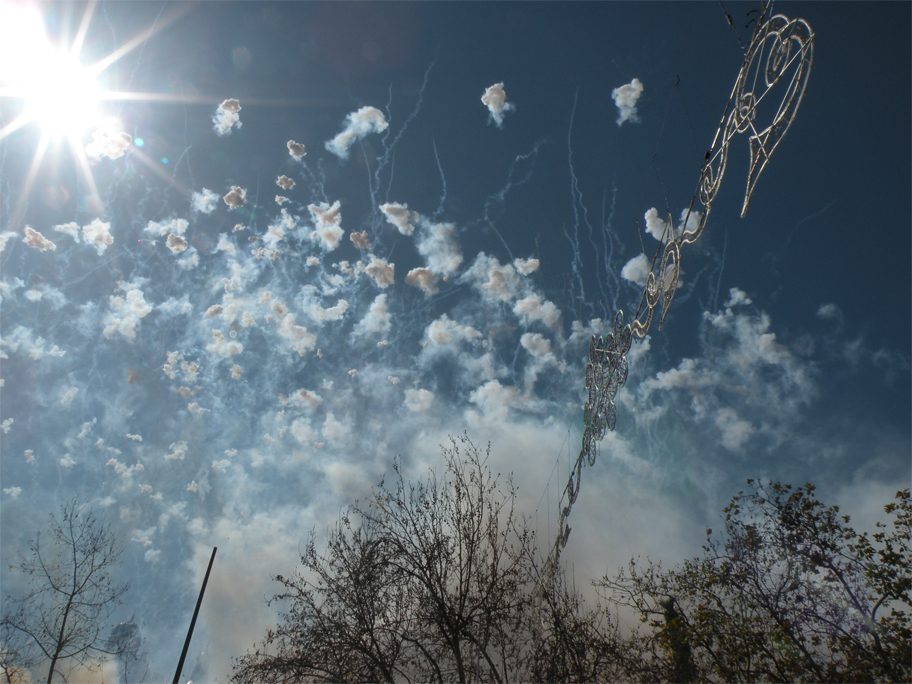 Perhaps the tamest part of all this is the traditional costume on show. Whether sat on the metro or shuffling down the street, falleras wow onlookers with their distinctive hairdos (the inspiration for Princess Leia?), delicate veils and dazzling silk-patterned dresses. Not to be left out, the men too dress up for Fallas, sporting billowing white shirts, flowery vests and coloured sashes. And keep an eye out for the energetic, adorable children – more than anyone else in the parade they have the power to elicit smiles and sympathetic “awws”.

Towards the end of the festival, the falleros and falleras embark on a long procession (L’Ofrena) from their respective neighbourhoods. Amid the sound of drums and trumpets whole families join in on the parade, all the while clasping floral offerings for the enormous statue of the Virgin Mary. Over a period of 2 days, men get to work converting the frame of wooden slats into an astonishing dress made entirely of flowers. Day and night the falleros/falleras stream in, announced by a commentator booming in proud Valenciano, and one by one they lay their fragrant offerings at the statue’s feet. Many come away with tears in their eyes. 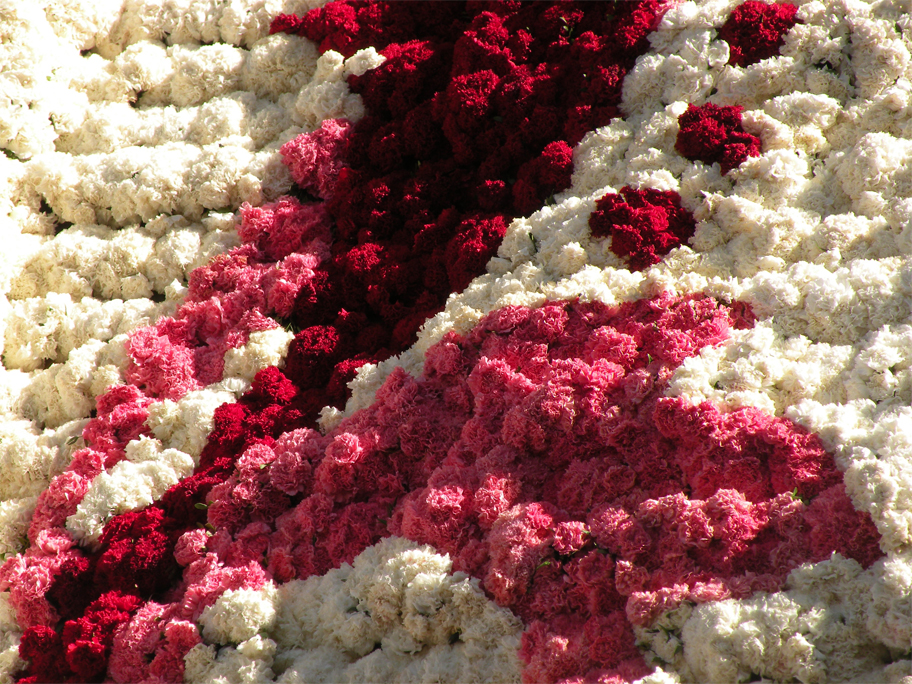 Once the last flower is placed on the Virgin – customarily by the Fallera Mayor – the signal is given to start La Nit del Foc, the “night of fire”. This is the culmination of a week’s worth of nightly fireworks over the old river Turia, now a beautiful ribbon of parkland running through the city’s heart.

Half an hour before it begins we find ourselves jostling onto the 16th century Puente de Real, one of the bridges closest to the launch site. The experience is not for the claustrophobic; under crowd conditions the Spaniards are experts at propelling themselves through every inch of usable space. But for all the discomfort, the lack of personal space and the determined sixty-year olds muttering and pushing from behind, La Nit del Foc is certainly worth the trouble. 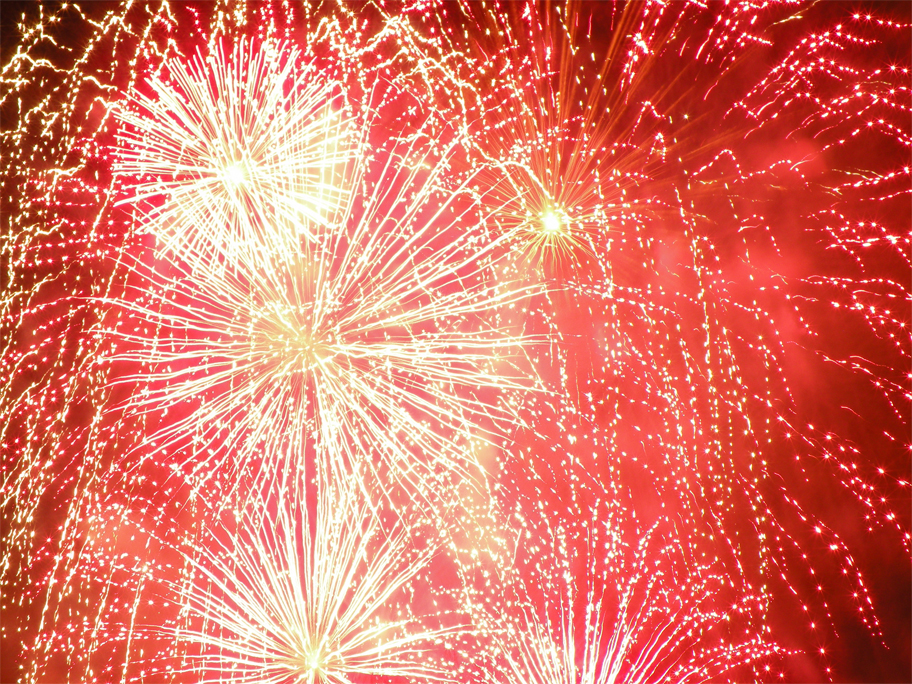 For such an extraordinary festival, Las Fallas really does go out with a bang. On the night of the 19th all the fallas go up in smoke, with the exception of a ninot that is saved for posterity. This is called La Cremà, “the burning”, and with more than 400 bonfires being lit across the city, it is truly a pyromaniac’s pipe dream.

It is half past 11 and we are wandering through the madness of the city streets. Around us fireworks shoot from the narrow intersections where the childrens’ fallas once stood, their remains smouldering in a heap of black ashes. We pick 2nd prize in the special category, a towering monument featuring an Aztec king and his resplendent headdress. With fizzy alcoholic drinks in hand we take our spots a good distance from the promising inferno.

Just before 1:30 the lights are turned out and the spectacle begins. A ring of ground pyrotechnics spurt forth tongues of fire, enveloping the sculpture in a cloud of yellow and pink smoke. Out of nowhere a spinning wheel releases a steady stream of fireworks and the first part of the falla is set alight. 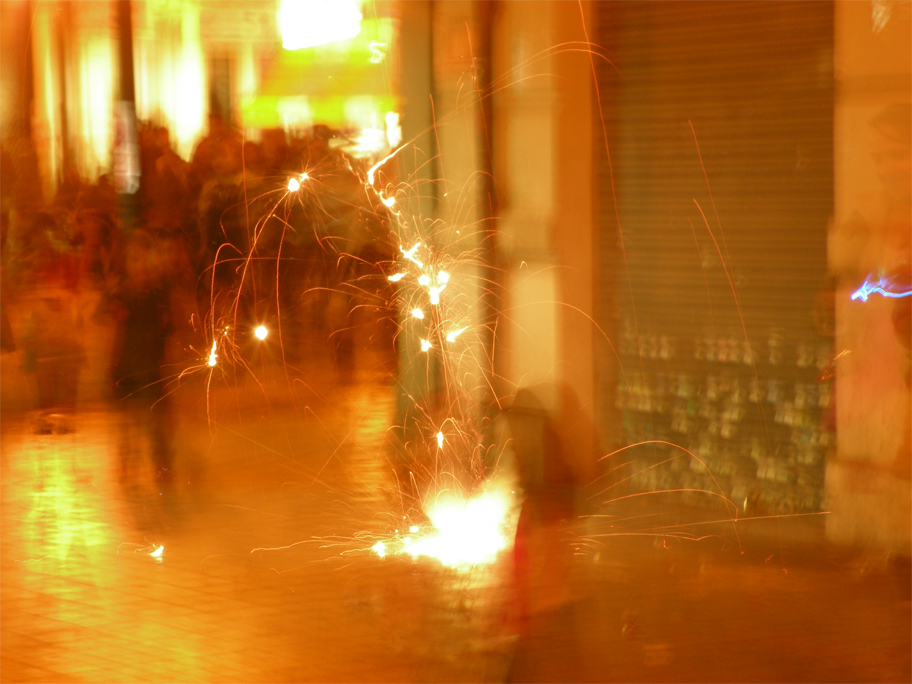 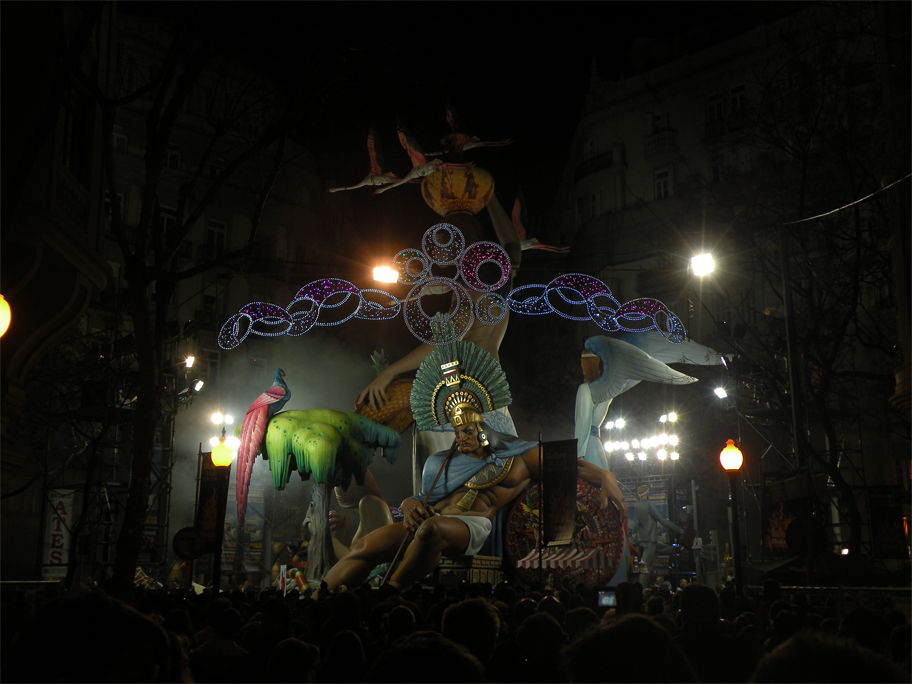 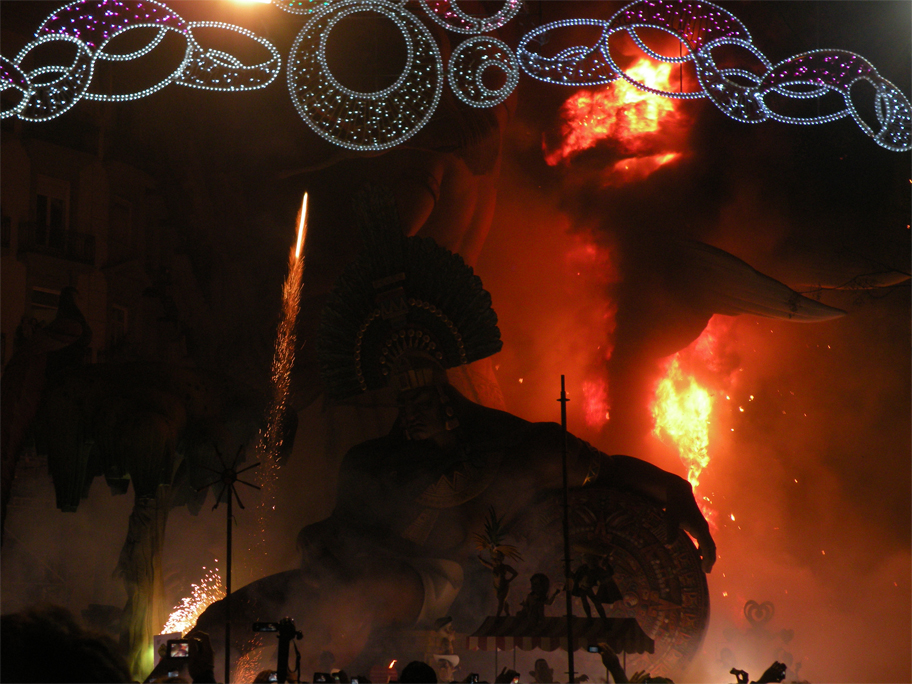 As the sky fills with burning embers the flames rise and engulf each remaining portion of the falla. Firefighters wield their hoses on full power, tempering the billowing curtains of black smoke. Transfixed by the bonfire the crowd oohs and aahs with each ninot that dissolves in the flames. First the winged angel, then the main sculpture… No one seems perturbed by the raw heat on our faces or the drops of sooty water falling from the sky. 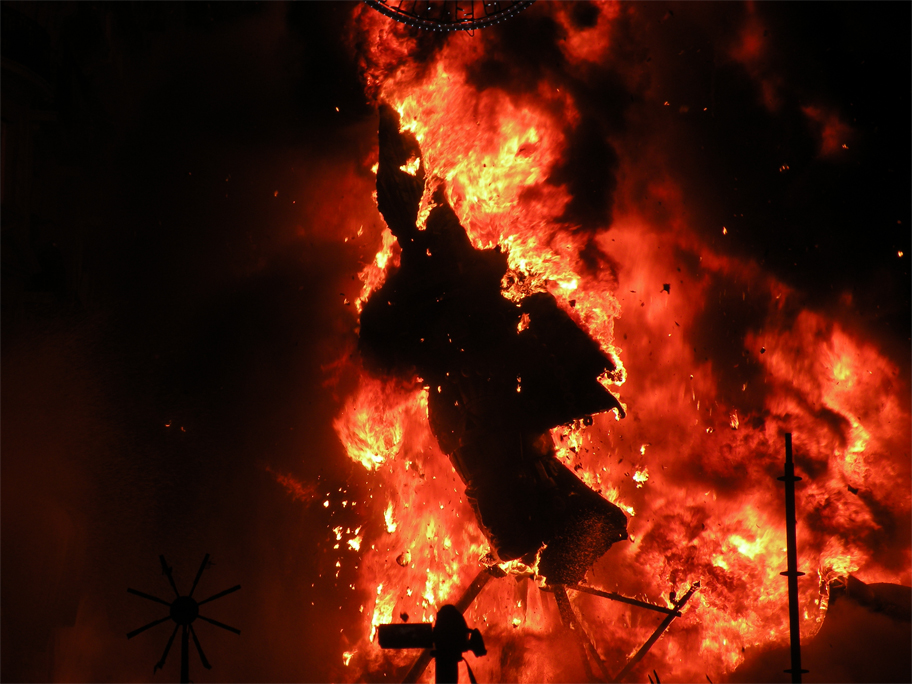 Before we know it the prize-winning falla has been reduced to a burning, twisted pile of debris. The crowd begins to disperse, save a handful of curious individuals intent on salvaging a piece for memory’s sake. We are exhausted, sleep-deprived and a little dazed from all the mad activity. But let’s face it, that’s what a great festival does to you.

If eardrum-busting pyrotechnics, non-stop parties and big bonfires are your thing, come to Valencia for Fallas Week (March 12-19).  Just don’t ask if they burn the Virgin.