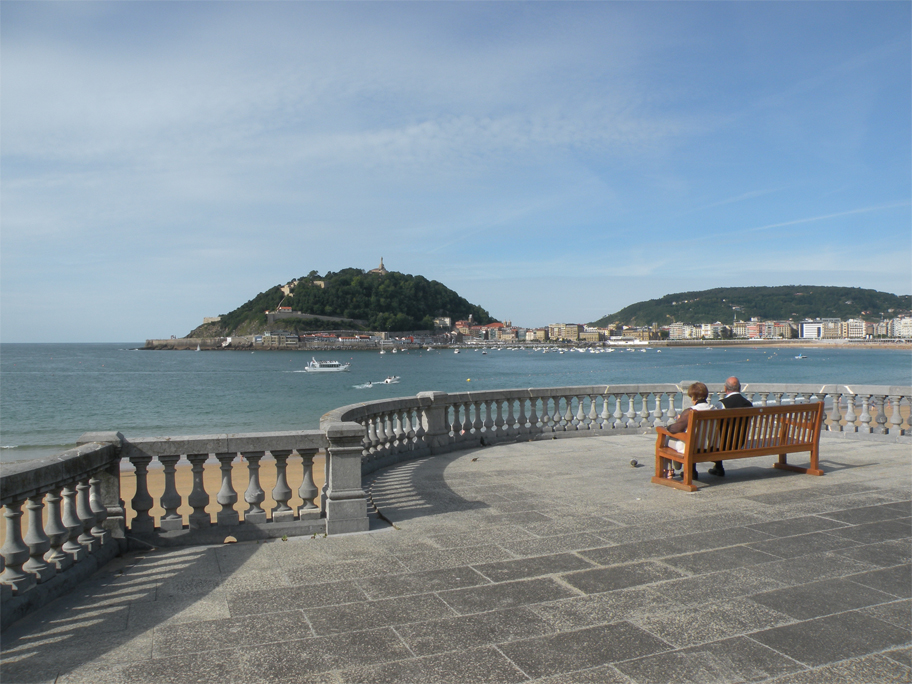 In my best Euskera, I cautiously approach the bartender. “Aupa! Bi patxaran.” He nods, scooping up two glassfuls of ice and filling them with liquor tinted the bright red of a children’s cough syrup. Night has fallen and we are bar-hopping along a dimly-lit stretch of the old city, beautifully unassuming and devoid of menus in French and English. According to Jordi, my friend and personal guide, this is the most Basque street in town.

During the past hour I have sampled txakoli, the delicious local wine, and a number of zuritas – small glasses of house beer, customarily only half-full. But Jordi has left one of his favourites for last; he is keen that I try a scarlet patxaran. Made from sloe berries and anisette, it is sweet, smooth and surprisingly easy to swallow. “Patxaran is really from Navarra,” he tells me, before taking a big gulp. “But here in Donostia it’s very, very popular.”

Two years ago it was edgy, forward-thinking Bilbao that took me by surprise, launching an ongoing love affair with all things Basque and Spanish. As my time in Spain approached its final month, I decided I’d hop on a train towards her sister city 50 miles to the east, just shy of the French border. 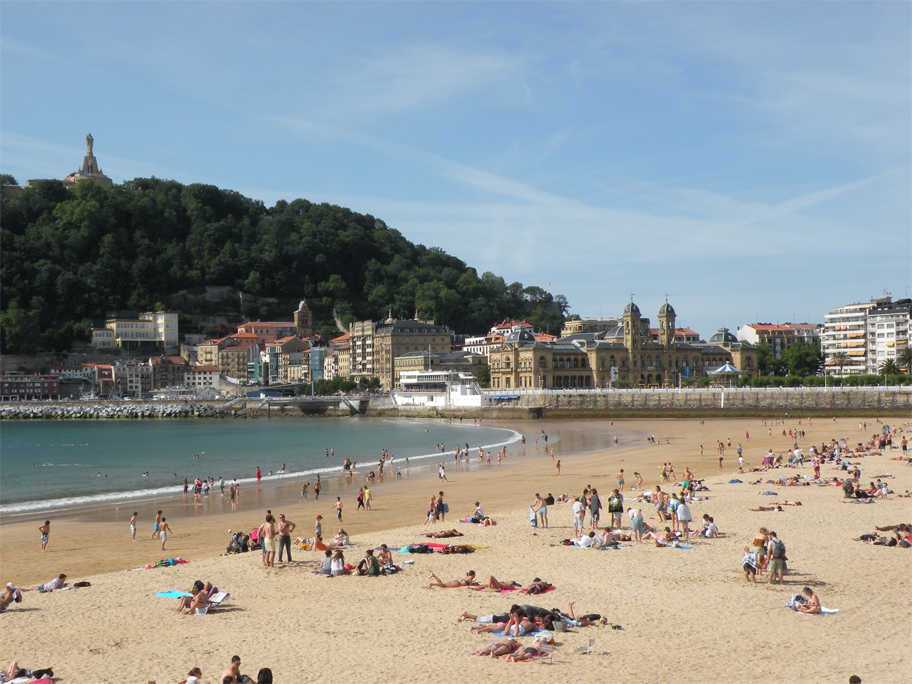 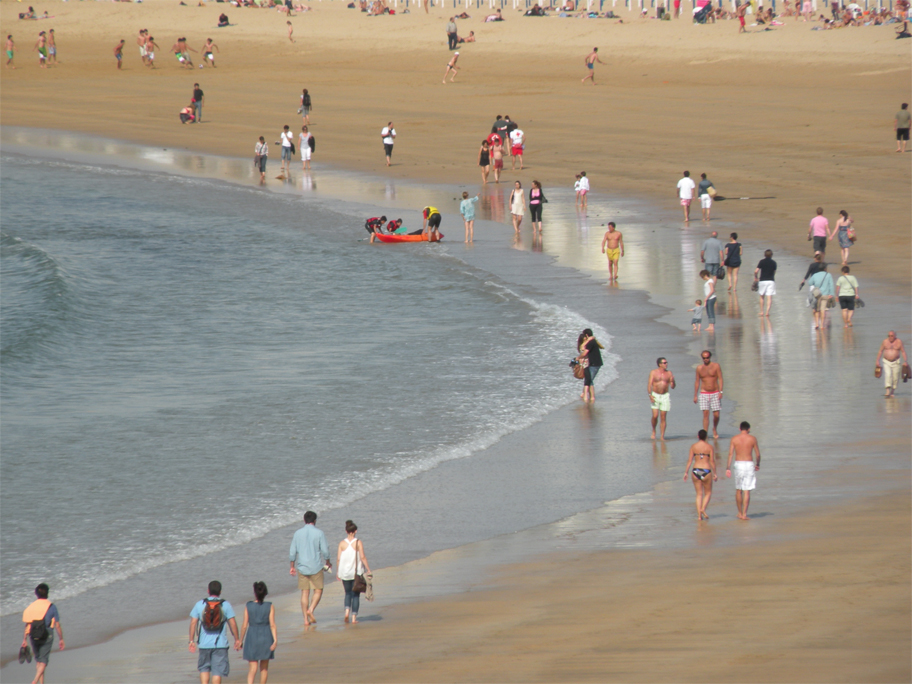 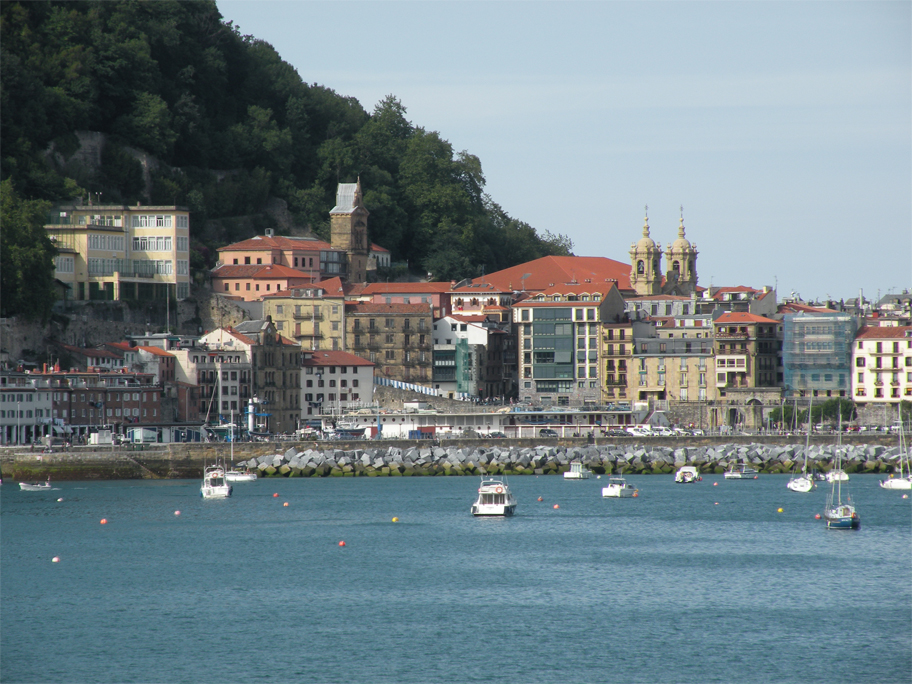 It’s my first afternoon in San Sebastián and I am on the sweeping promenade beside La Concha Beach. On a sunny day in early June, when the sand is not yet crowded with sunbathers fleeing the heat of the Castilian plains, it’s a wonderful place to pasear – the Spanish verb for “taking a stroll”. Already I can feel my pace slowing to the flow and ebb of the Atlantic tide.

From the grounds of the Palacio de Miramar, a faithful reproduction of an English manor house, I watch a lone sailboat slowing out of the bay. It could be said that San Sebastián exudes the nineteenth-century elegance of a French resort; apart from an annual (and very prestigious) film festival, there are traces of Paris in its stately buildings, Mansard roofs and cast iron decorations.

I meet Jordi below the steps of the city hall and former casino, a graceful domed edifice in honey-coloured sandstone. Hailing from a little town outside Barcelona, he has been a resident donostiarra for the past three years. That has given him enough time to become a euskaldun berri – a new Basque speaker. “It’s not all that difficult,” he declares. “Once you know Spanish, there’s a lot of common ground to start from.” Jordi points to a black sign etched with bold white lettering. “Culture” – cultura in Spanish – is spelt with a K. 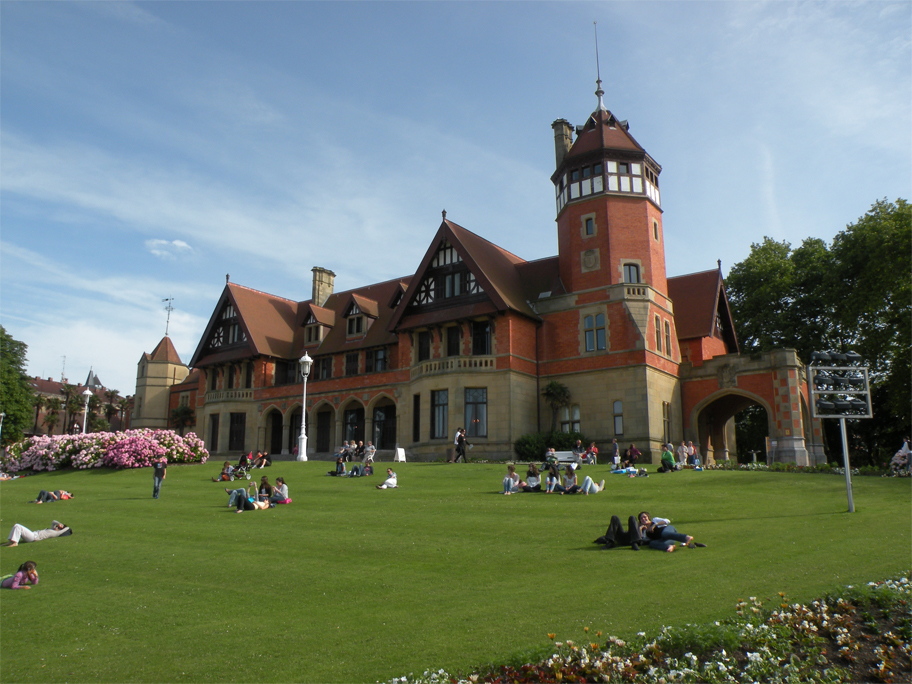 And speaking of culture, there’s no better way of delving into San Sebastián than to experience it with your taste buds. The city has a well-earned reputation for hosting some of the best chefs, tapas and restaurants in Spain, many of them Michelin-starred. Then there are the countless watering holes dotted in and around the historic centre, or Parte Vieja.

Among them there is one that is particularly memorable for its nationalistic leanings. Under stark yellow fluorescent tubes, the walls are lined with explicit independence posters and portraits of Basque prisoners. My initial unease gradually gives way to calm as I realise that no one is whispering or staring at the presence of a foreigner. I am sipping on my zurita when Jordi hands me an innocuous white pamphlet with a smile. “This is for you.” I look down at the front cover, emblazoned with a bright-eyed child, his face painted the green, white and red of the Basque flag. “You are not in Spain or France,” it reads. “You are in the Basque Country.”

Like a self-fulfilling prophecy, it takes me all of ten minutes to feel as though I have actually left Spain. On the street we come across an affable man with a kind smile, close-cropped grey hair and a stubbly beard. Jordi recognises him as a teacher at the Basque language institute he used to attend, and we are quickly introduced – entirely in Euskera.

“Zer moduz?” He asks, as we exchange a warm handshake. It rings a bell but my mind has gone blank. I hesitate and look over at Jordi, who doesn’t seem to be paying any attention. “Er… I don’t understand.” Silence. The professor looks at me expectantly, still gripping my hand as he waits for an answer. But then I remember a crucial phrase I learned in the wake of Bilbao.

“Ez dakit euskaraz hitz egiten.” I don’t speak Basque, I tell him. In a flash, the man’s gentle smile widens to a grin and he switches to a curiously-accented castellano. I am instantly relieved. 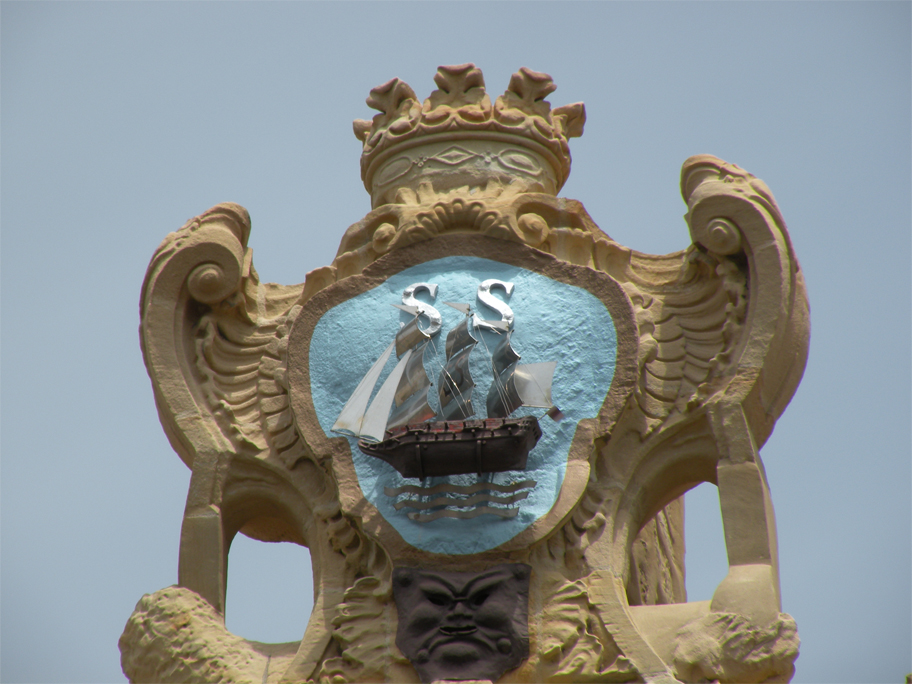 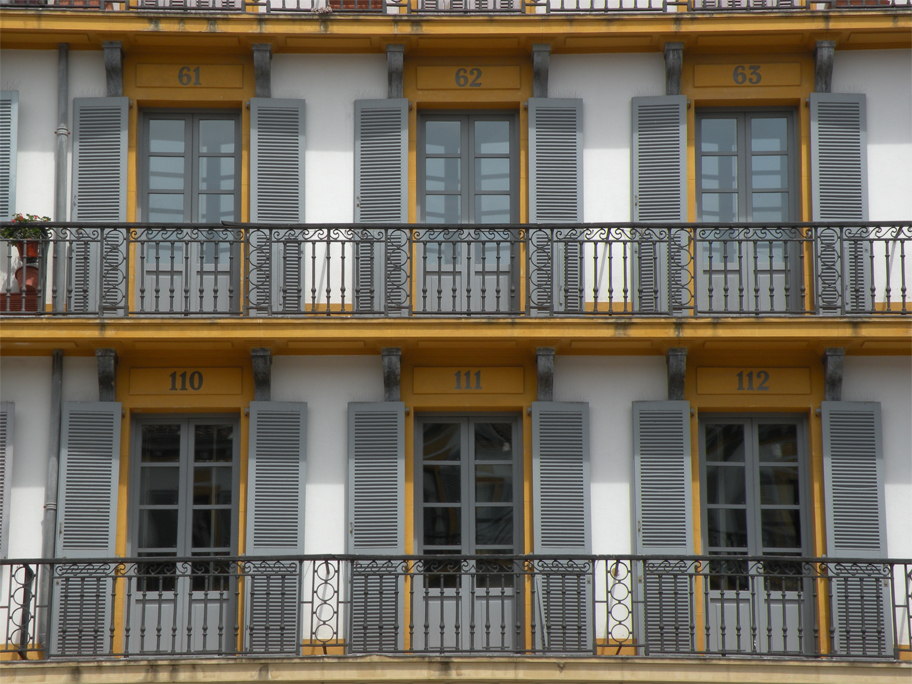 The next day the skies are overcast, save the brief spell of sunshine filtering into the old town. It’s lunch hour and we are on the hunt for pintxos, that never-ending assortment of Basque tapas spread across the city’s bar counters. Before going in, Jordi warns me not to pile too much on my plate. San Sebastián is not known to be cheap and the standard price is 1.70 euros apiece, easily rising past the 2-euro mark for the more elaborate creations. “I’ve heard stories of visitors who ended up having to pay 30 euros,” he whispers.

I am rather more fortunate. Although it is still a whopping 12 euros – astronomical compared to the bargains of Salamanca – I am content with my plate of delicacies, featuring a skewer of tender octopus and my favourite, roasted piquillo peppers stuffed with tuna on a bed of French bread. 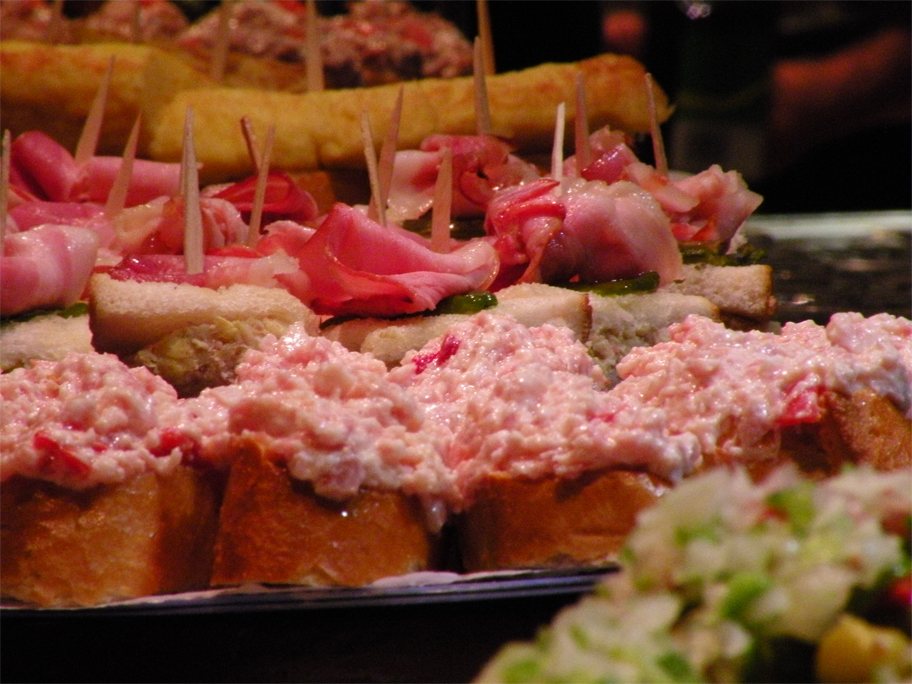 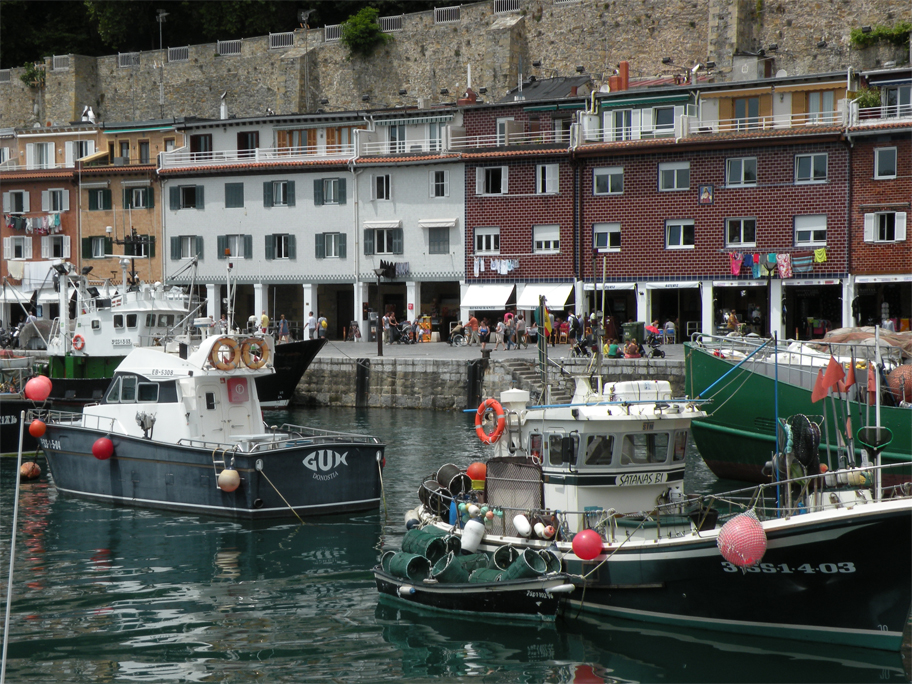 For a small fee we board the ferry to Santa Clara, the humpbacked island anchored at the entrance to the bay. From the heights of Monte Urgull, which we climb from the edge of the old town, I can’t help noticing its sheer resemblance to a turtle. Jordi is not so convinced.  “I never thought of it that way, but if you insist…” He squints at the lonely lighthouse near its crown.

The boat pulls up at the jetty and we disembark amid the excited shouts of children. There’s a miniature beach and a bathing shed, but that’s not what we’re here for. In fact, Jordi tells me he’s not much of a beachgoer. I am dumbfounded. “But you live in Donostia!” He shrugs. “Well, I prefer the mountains.”

We wind our way up and down the island’s trails, scattering camouflaged lizards at every footstep. The allure of Santa Clara is the fact that it often feels like a forgotten desert island – even if it sits just a stone’s throw away from the buzz of the city. At the lighthouse we turn past a low wall and stand among the trees, listening to the island’s soundtrack of pounding surf and flocks of seagulls.

Once on the mainland, Jordi takes me on a walking tour via the Neo-Gothic Cathedral of Buen Pastor, a nearby bar (a good amount of my time in San Sebastián seems to be spent in bars), and the tree-lined banks of the Urumea River. We are just down the road from the railway station when Jordi stops in front of a nondescript, aging lift. He presses the button and turns around. “This is one of the entrances to Cristina Enea Park.” I am perplexed, but I follow him anyway. At the other end we cross over the train tracks – via a rusting steel bridge – and stroll into an unexpected sea of verdant green.

Formerly a privately-owned estate, the park was signed over to the municipal authorities less than ten years after the death of its wealthy owner, Fermín de Lasala y Collado (1832-1917), better known as the Duke of Mandas. Born in San Sebastián, he acquired a vast parcel of farmland on the edge of the city, naming it after his beloved wife. Today two houses – one in crimson and the other a cheery yellow – stand as a quiet testament to his legacy.

Although Jordi denies that he is a beach enthusiast, we spend the latter part of the day on La Concha, walking barefoot on the sand and wading in the cold waters of the Atlantic. Beyond Santa Clara a delicate veil of lilac animates the horizon; it’s a scene that my camera struggles to capture.

As dusk sets in we arrive at the far end of San Sebastián’s seafront promenade. To a backdrop of distant storm clouds, I cross off the last item on my sightseeing checklist – a trio of industrial forms clinging to the rocky landscape, masterpiece of native artist Eduardo Chillida. Named El Peine del viento, literally ‘Comb of the winds’, these weathered steel sculptures have become a veritable symbol of the city since their installation in the late 1970s. 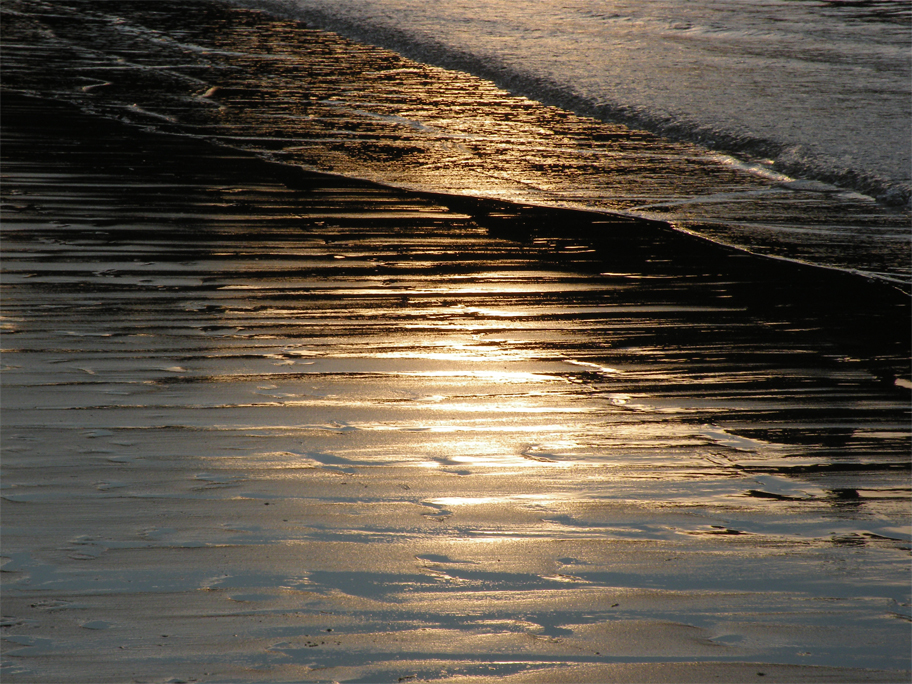 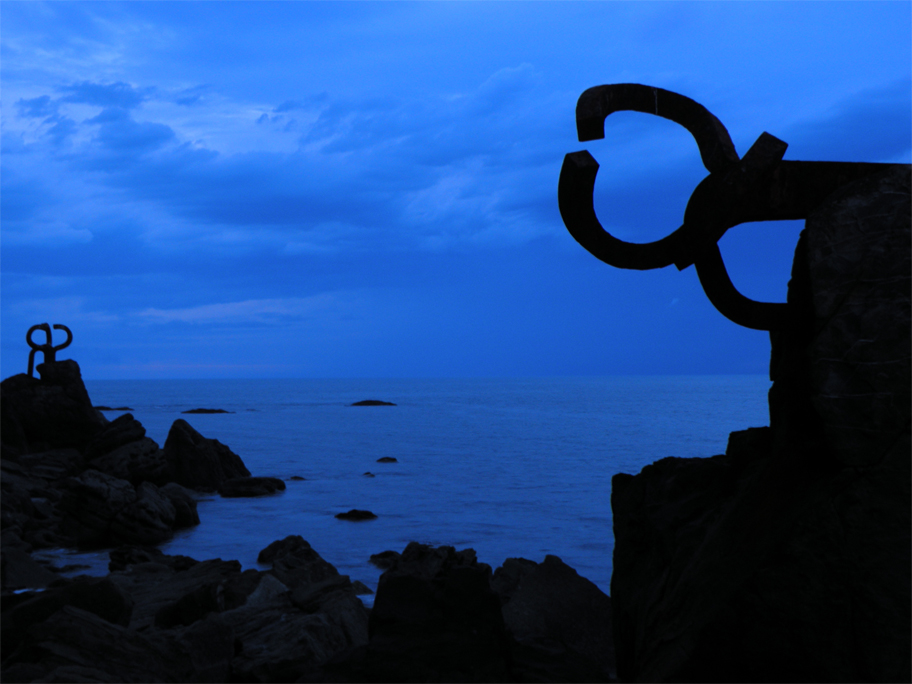 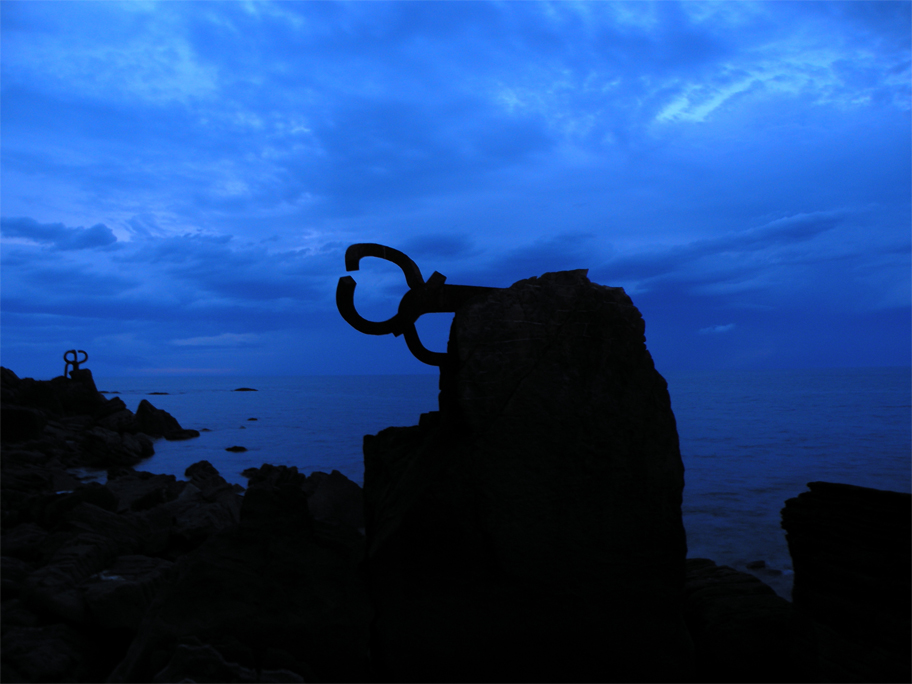 My last meal in Donostia is every bit the indulgent experience that I was looking for. We duck into an inviting pintxos bar one block from the seafront, drawn by its soft lighting and daily specials scribbled on green chalkboards. The two pintxos that I order off the menu prove to be visually arresting works of art. First up is the local txangurro crab, shredded, marinated and served in a delicate wrap. The top is dressed with crispy wisps of batter, and on the side a luscious sauce proves faintly reminiscent of béchamel.

The second dish is no less extraordinary. It is a slab of foie gras, served on a handmade wafer and grilled to absolute perfection. The finishing touch? A topping of applesauce and strands of grated idiazábal cheese. Made from unpasteurised sheep’s milk, rich and nutty idiazábal is my new favourite.

We sit down by the brick wall over two more glasses of patxaran and Jordi begins to speak in his native Catalan. I’m surprised at how much I can understand – in my mind it is a distinctive meld of Spanish, French and Italian, but with the phonetics of Portuguese. We talk about our travels, our shared love of languages and his dreams of living in Asia. “One day,” I promise him, “I will show you around Hong Kong.” For someone who has given me an authentic taste of his adopted home, it’s the least I could do.