By the town of Kasi we pull over at a roadside restaurant – rows of plastic furniture arranged under a makeshift tarpaulin roof – indulging in a generous bowl of noodle soup. Happily I slurp up the slices of beef, coriander and meatballs, seasoned with flakes of chilli. It is one of the most memorable meals of our stay, and an absolute bargain at 15,000 kip (roughly 1.85 USD).

The previous morning we had wandered into the bus station at Talat Sao, just opposite the Morning Market. When we asked for buses to Luang Prabang, a man with an affable air approached us and shook his head. “Tomorrow? Only from the Northern Bus Station.” Unfolding our pocket map of Vientiane, we realised just how far away it was from where we were standing.

“But I can take you there by minivan,” He offered. “Only 8 hours. The bus takes 10 hours.” The man pulled out his business card, neatly illustrated with a blue livestock truck. “I can pick you up at the hotel; send you to the hotel in Luang Prabang.”

“What time can you do tomorrow?” I asked.

The next day we were curious to know the answer to a burning question: were we on our own, or would we be sharing the minivan with other travellers? Stepping into the vehicle, we had no clue that this was going to be a lesson in hitchhiking – the Lao way.

Every now and again the driver would stop at the sight of anyone waiting by the roadside, reverse for a few metres, and ask where they wanted to go. A handful of interesting characters piled on – among them an elderly gentleman decked out in a well-ironed military uniform, a chic young woman who was constantly barking down the phone, and a fifty-something with a bag emanating the pungent smell of fish paste.

To the sound of Lao pop, characterised by the heavy use of a synthesizer, we savoured the fresh country air rushing through the open windows. I had imagined that the road between Vientiane and Vang Vieng was flat, but it could not have been farther from the truth. This part of Route 13 seemed to alternate between stretches of asphalt and ochre-coloured dirt, pockmarked by a never-ending series of potholes.

For four relentless hours we were tossed around, mercilessly, like rag dolls in the back of the minivan. At the telltale swerving and the sound of brakes on the mud, we braced ourselves for each hard, inevitable bump. I felt as though our heads would eventually hit the ceiling.

About an hour from Vang Vieng we finally caught sight of the limestone karst formations, their summits partially obscured by wispy banks of low cloud. To our relief the road was more or less paved as it climbed up into the mountains, exposing magnificent vistas of deep valleys and virgin forest amid the towering shafts of rock. This dreamlike scenery was the reason we had picked the journey overland, and it was worth the sheer discomfort of those first few hours.

Meanwhile our driver fearlessly carried on at full throttle, racing around sharp turns and overtaking lumber trucks, lorries and tour buses at breakneck speed. We passed the scars of previous landslides, exposed walls of red soil looming above the narrow highway. As hair-raising as it was, we made it to Luang Prabang just before sundown – 3 hours behind schedule but all in one piece. 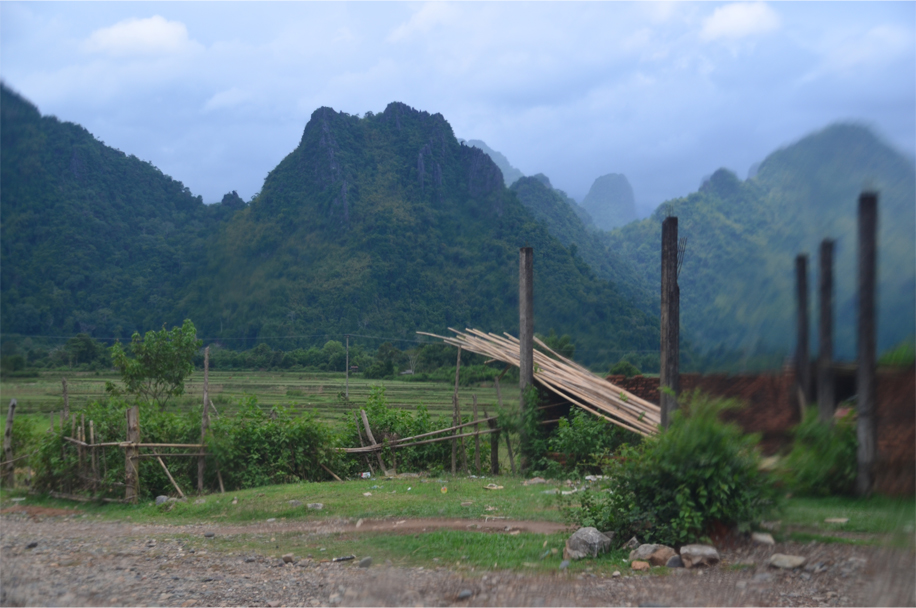 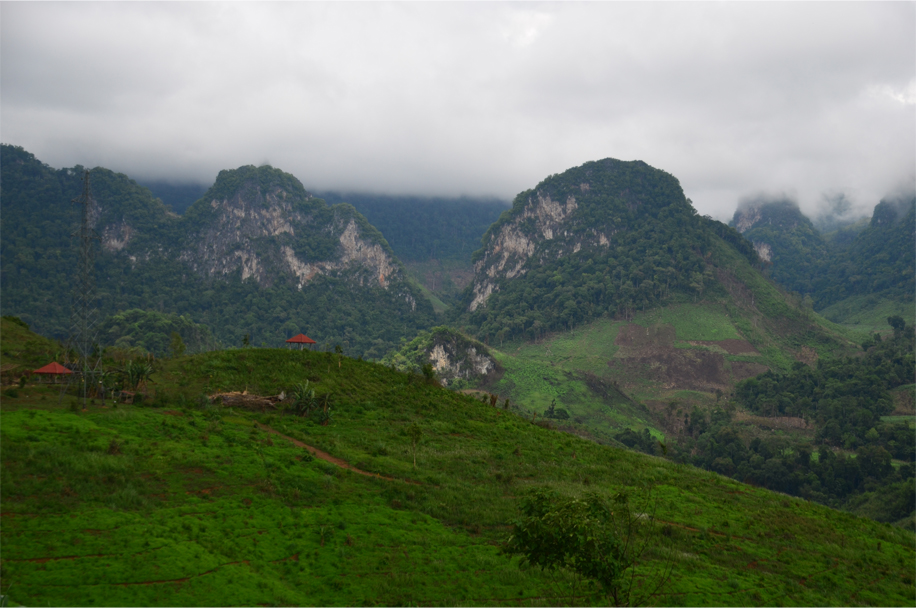