High up in the mountains of East Java, the village of Cemoro Lawang is a far cry from the heat and humidity of the island’s north coast. We are here a quarter after six on a Sunday night, searching for dinner along one of its two streets laid out in a Y-shaped pattern along the rim of the Tengger Caldera. Below our feet the ground is coated in a thin layer of fine volcanic dust, a sign of the active volcano residing on its doorstep.

Bama is my translator, guide and travel companion, but most of all he’s a teman dekat – a close friend. Swinging open the low stable-like door to a green clapboard house, he calls out into the empty but brightly-lit restaurant. In the next room a family has settled down to watch TV. With a shout the grandmother emerges from the back, wearing a flowing brown dress patterned with red and green highlights. Bama orders us two bowls of soto ayam – spicy chicken soup – and two glasses of hot tea. From the kitchen we hear an audible chop, chop, chop before discerning the sound – and smell – of spices being thrown into the pan. We take refuge from the cold night air, sipping on fragrant teh manis, infused with sugar and the taste of honey.

On the road from Surabaya we had passed rows of red tiled roofs, punctuated by the glittering domes of village mosques. At the end of dry season the well-watered rice paddies were still an iridescent shade of green. Above the bustle of human activity the faded blue silhouette of a distant volcano, Penanggungan, rose over the muggy plains. The roads became progressively smaller, until we saw hand-painted signs for homemade honey and flocks of laughing schoolchildren, dressed in vivid red and white uniforms.

Down below we had spotted an ominous wall of cloud, edging closer and closer until it enveloped our minivan. The narrow two-lane road twisted and turned through the mountains, passing through multiple villages in a mystical landscape dotted with sturdy pines.

Just shy of our destination, the late afternoon sun broke through the low cloud, and we emerged to the welcome sight of a clear blue sky. Here the streets were adorned with janur – drooping, exuberant poles with curls and lantern-like shapes, each one fashioned from interwoven palm leaves. By the roadside, flags waved languidly in the breeze; we had arrived the week before a Hindu festival. “These are everywhere in Bali,” Bama said. He pointed out the posts carved in black temple stone, batu candi, with a chair-like repository for floral offerings. 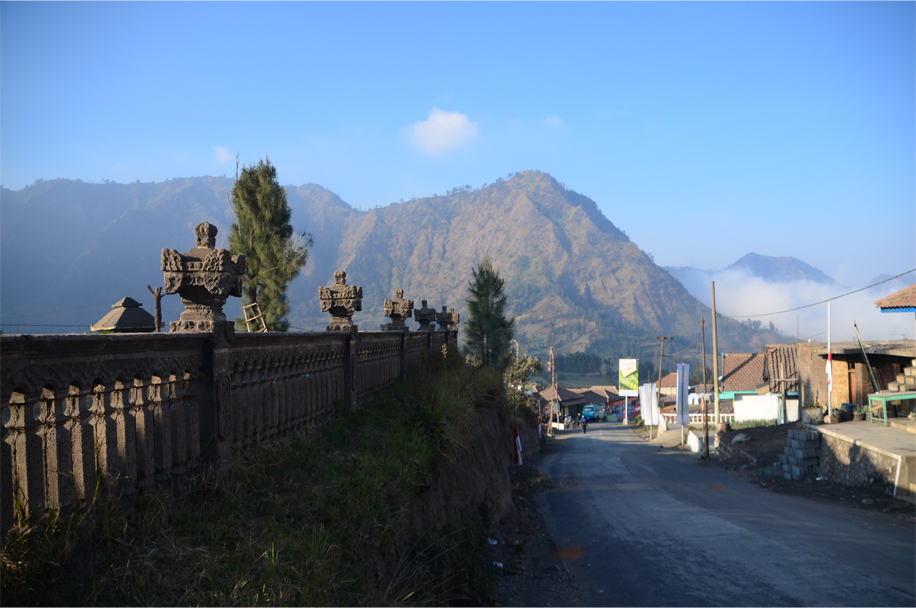 Late afternoon at the Tengger Caldera 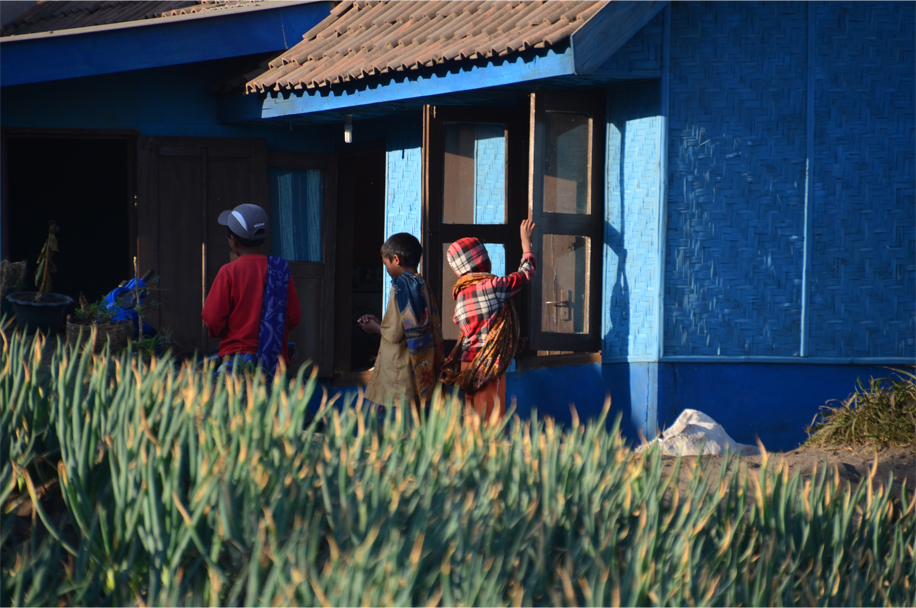 Tenggerese children in the fields

I have my first view of the Tengger Caldera from the lookout just outside our hotel – its scale and majesty is such that few photos can really do it justice. Hearing the wind howling far below on the barren expanse of Lautan Pasir, the vast ‘Sea of Sand’, we struggle to make out the tiny vehicles gathering streaks of dust in their wake. Much of the caldera is enveloped in hazy yellow light, but the temple at its centre has fallen under the shadow of Mt. Batok’s cinder cone.

The next morning brings the potent smell of sulphur drifting into our room. At 3:50am we pile into the back of a jeep, its door barely large enough for us to squeeze through. Around the sleeping village the stark, grey-blue landscape is bathed in the light of the full moon. Our driver puts his foot to the pedal and we roar ahead, shaking along a dirt track between the endless onion fields, colonising the fertile volcanic soil in meticulous rows. Halfway to the drop-off point, I turn my head and peer out the back. Far behind us a trail of lights is tracking noiselessly along the same road, mirroring the clear night sky above the darkened caldera.

At Mt. Penanjakan the enterprising vendors have already set up long tables serving tea, coffee and hot chocolate. Others offer surgical facemasks to ward off the ash. We approach a woman leaning against a concrete post, wrapped up in a shawl. “Morning,” she says wearily. I greet her with a polite “selamat pagi”, more than a little breathless from the climb. Roughly 2,500 metres above sea level, the air seems noticeably thinner. 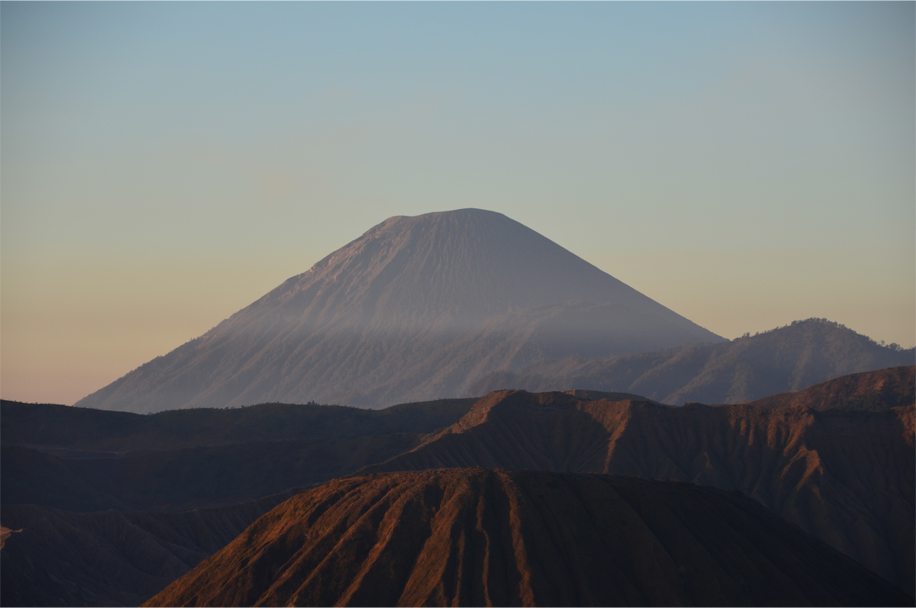 Soon the viewpoint hums to a potpourri of languages: English, French, Mandarin, Cantonese and Brazilian Portuguese, with traces of Russian and Spanish thrown into the mix. Beyond Mt. Bromo’s steady plumes of steam, we observe the majestic cone of Semeru, Java’s highest mountain at 3,676 metres. It releases a small puff of smoke, dissipating in the high winds at its summit. Behind us I can hear someone in Cantonese pleading for the mountain to reawaken from its slumber.

According to East Javanese folklore, Semeru has a central role in the mythical origin of the island. Before its settlement by humans, Java was said to float freely on the sea, perpetually tumbling and shaking without a firm foundation. The Hindu gods decided to anchor it to the earth, transplanting sacred Mount Meru from India onto Java’s western region. The mountain’s immense weight caused the island to tip, and the gods responded by moving it eastward. This movement knocked several parts off its lower rim, forming a chain of East Javanese volcanoes. Finally its topmost portion was carved off to create Penanggungan, the blue cone we had seen en route from Surabaya.

As the sun swings higher in the sky, the first strands of morning light strike the summit of Semeru, illuminating the sheer caldera walls and evaporating much of the morning mist. We watch the sun’s rays creep down the slopes of Bromo, along the eroded gullies of Batok, and across the raw volcanic landscape. The outlines of the small Hindu temple, Pura Luhur Poten, break free from the sea of cloud, now beginning a slow retreat from the caldera floor.

Later on, after leaving our footprints at Lautan Pasir, and peering down into the steaming acidic lake from Bromo’s crater rim, I ask Bama how I can express my amazement in Bahasa Indonesia. “Mengagumkan”, he smiles. “Mengagumkan.” 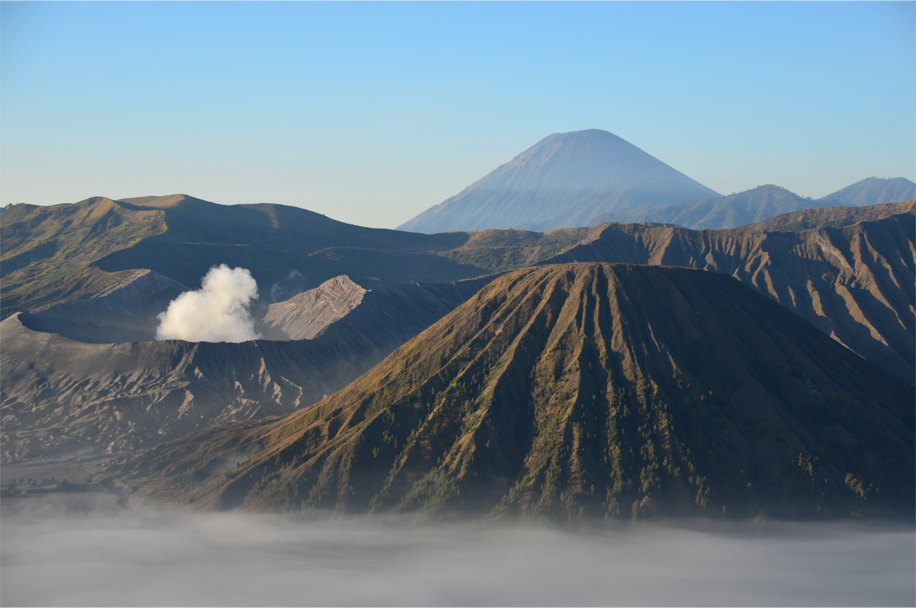 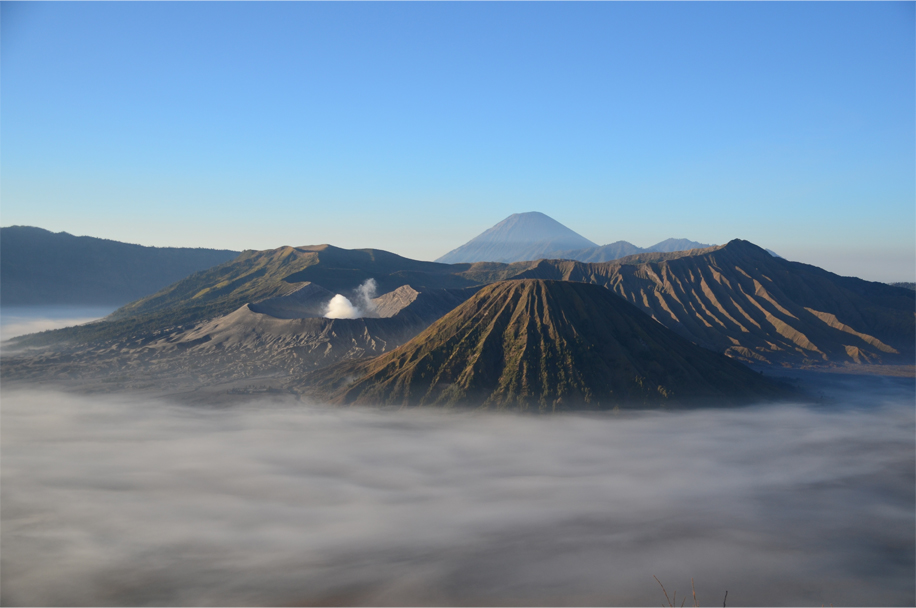 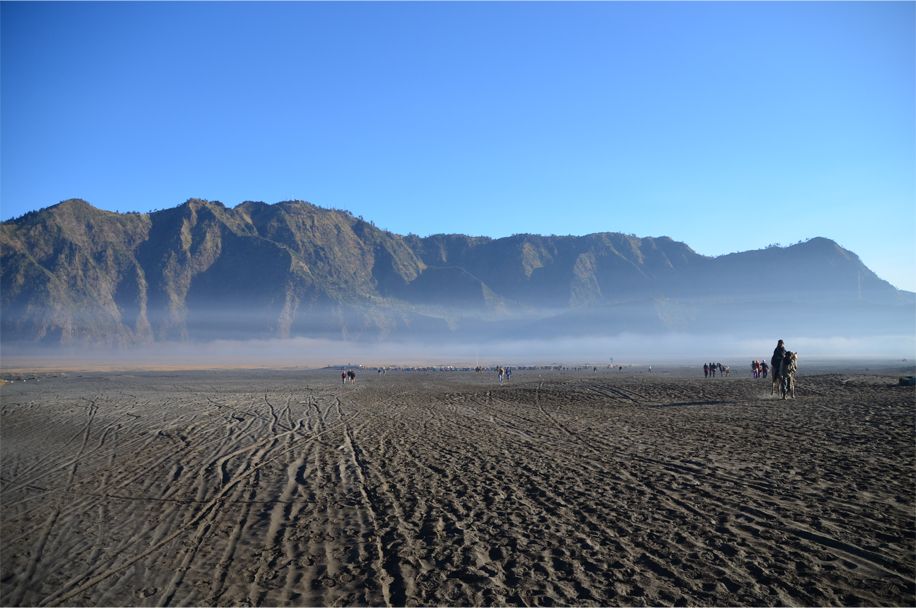 Lautan Pasir, the ‘Sea of Sand’ 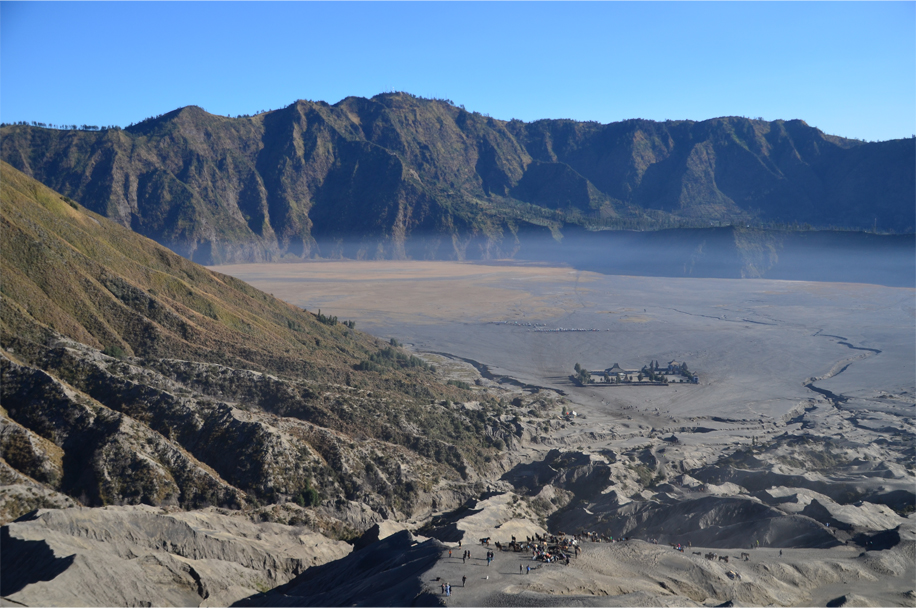