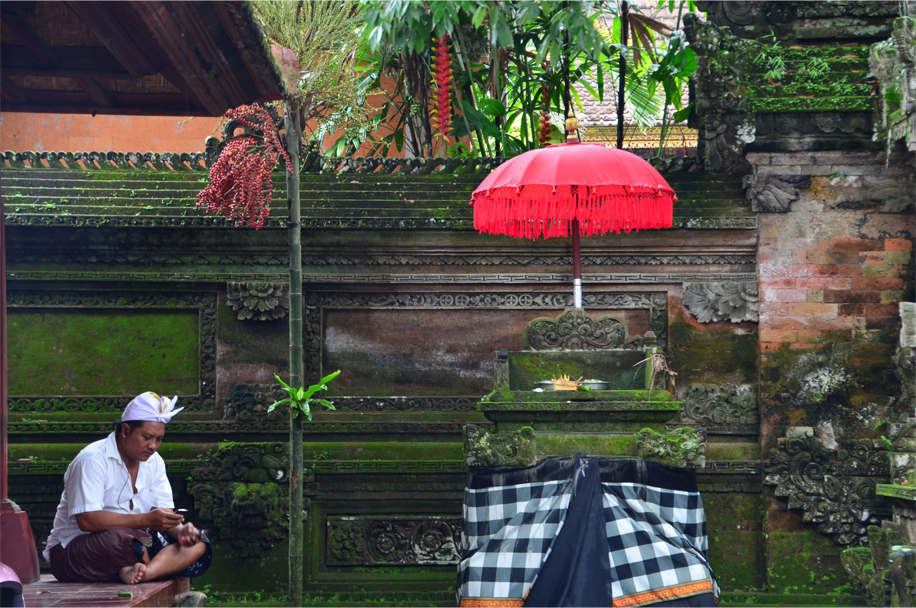 In the darkness, Made’s wide grin glowed brightly, a perfect set of teeth bathed by the soft light from a nearby lantern. He had driven us the 90 minutes from the airport to the four-bedroom hotel owned by his brother off Jalan Bisma, a porous boundary between a legion of tiled red roofs and a swath of paddy fields plunging into a steep ravine.

The name Ubud comes from the Balinese word ubad, or “medicine”, and the burgeoning town is now the source of a modern-day variety peddled by Elizabeth Gilbert. I came to Ubud not to find inner peace, or love, or a sense of enlightenment, but I came in pursuit of beauty. And within the first few moments of stepping out of Made’s van, it was there, heard but not seen under a darkened sky.

It was an impromptu night orchestra of critters in the paddy fields, with chirping crickets and lizard calls which I mistook for birdsong. I stopped and listened intently to these echoing, unfamiliar noises. Bama pointed out the low, nasal “Bu!” and “Beh!” of toads, then the clipped “Ep! Ep!” of frogs – a vocabulary that he knew well from his childhood in the countryside of West Java. But the dominant voice in all this was the comforting sound of clean, running water in an open ditch by the roadside, gushing south towards the Indian Ocean.

Long before ‘Eat, Pray, Love’ came onto the scene, Russian-born German artist Walter Spies had fled post-World War I Europe and found inspiration in Java and then Bali. From 1927 Spies would live in Ubud, spending the next 11 years documenting Balinese art and culture along with Dutch painters Willem Hofker and Rudolf Bonnet. The artist himself played an important role in developing new forms of Balinese music and drama, including the Kecak fire dance. 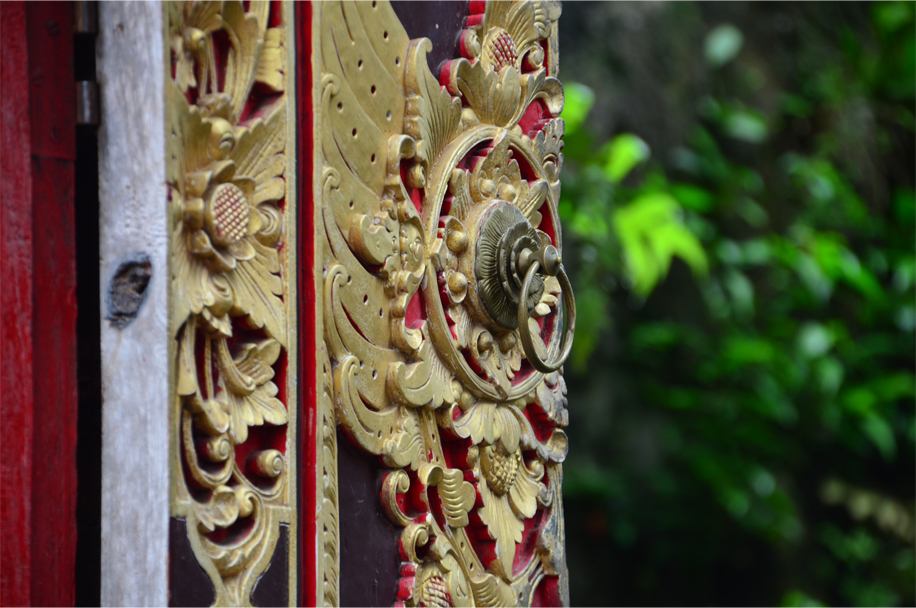 The gardens within, Ubud Palace 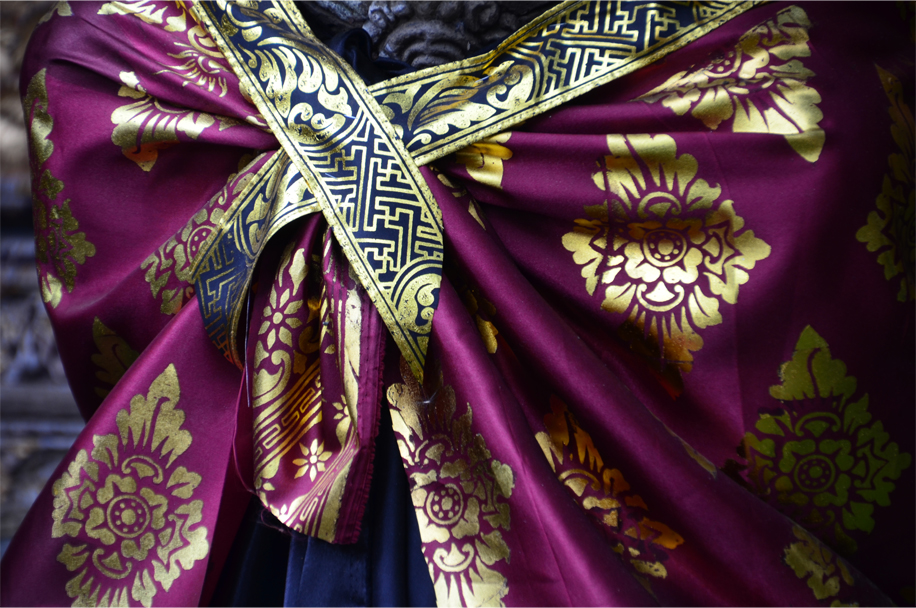 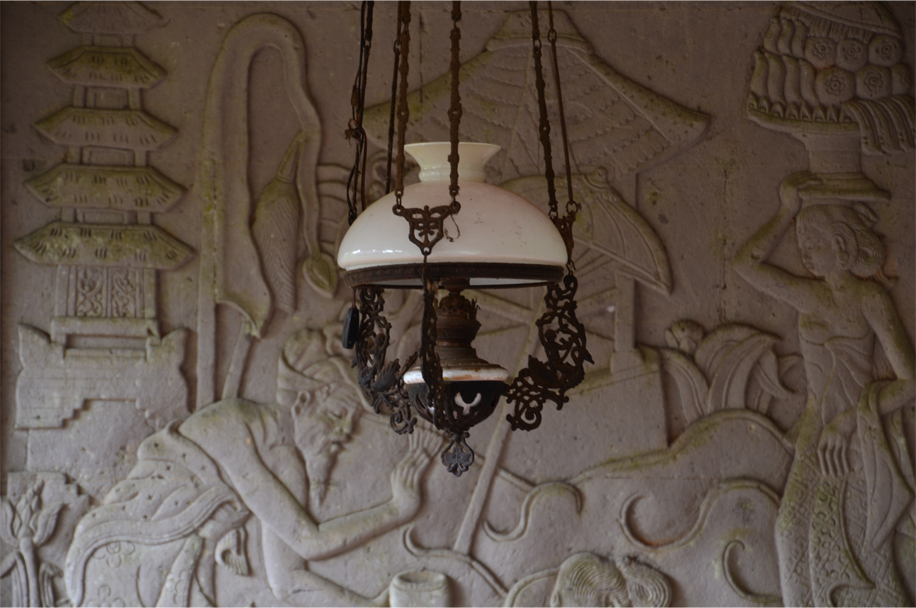 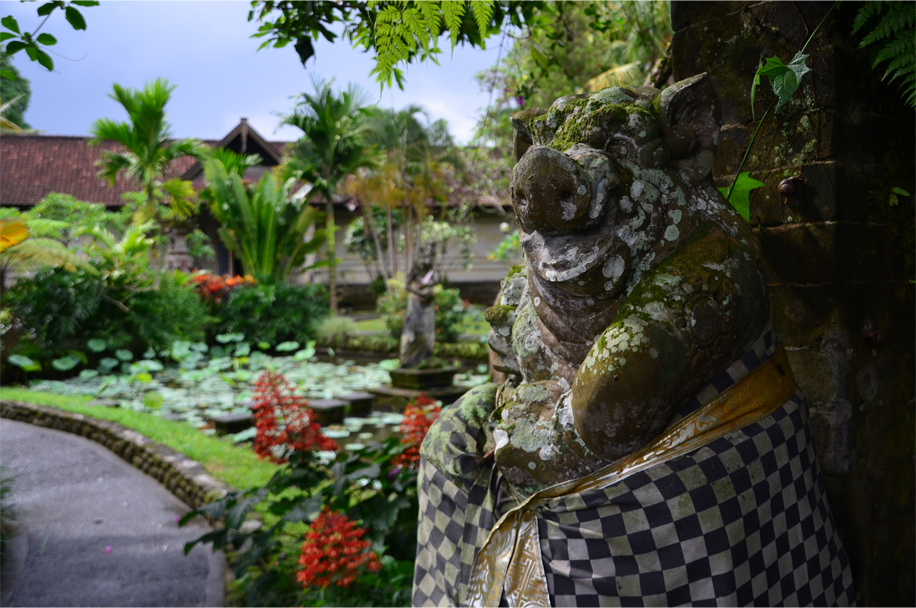 In the grounds of Museum Puri Lukisan, the “Castle of Painting” 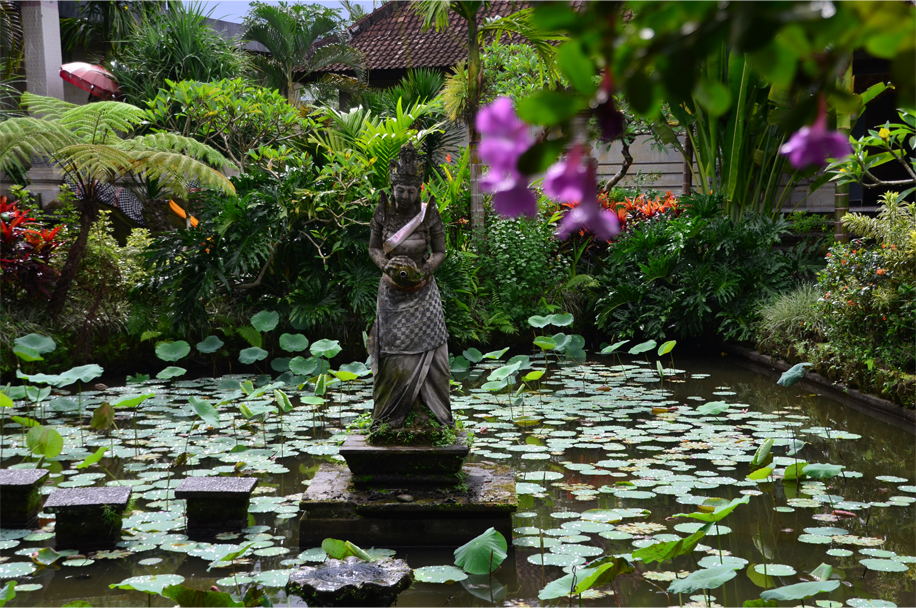 Spies is also credited with alerting Western audiences to the singular beauty found on the island. Ubud in the 1930s was a gathering place for the best local artists, and it has remained the cultural heart of Bali ever since. More recently, the town has found itself in the middle of a tourism boom, its popularity buoyed by the success of Gilbert’s 2006 memoir.

Some complain about the weekend traffic jams, the tour buses too large for its streets bearing flocks of day-trippers, and the overpriced clothes for sale in its boutiques. But Ubud is still a local town full of local people going about their daily business, with elements of the sacred in every aspect of Balinese life.

On Ubud’s pavements we tiptoed around the ubiquitous canang sari – a miniature basket of woven palm leaves, filled with petals in four colours and fern tips, then topped by several incense sticks, sprinkled with holy water and laid twice a day outside homes, shop fronts, restaurants and guesthouses. We saw them being carefully prepared early in the morning at Ubud Market, before its daily transformation into a bazaar selling art and handicrafts.

Bama guided me through the maze of wares, spread out on the paving stones bathed by the previous night’s rain. I was most fascinated by the hidden “understory”, where the golden morning light illuminated stacks of dried goods, bananas, baskets of fish, and a roasted suckling pig.

But of all the blissful moments in Ubud, which were many, I cannot forget how it was to arrive that very first night, as we entered a lush garden whose winding pathway led up to our small hotel. A single firefly circled languidly in the humid night air, and the fragrant smell of Balinese incense, crafted from cempaka blossoms and cendana, Indian Sandalwood, wafted into our nostrils.

It was here that Made looked at me and smiled, the skin around his eyes creasing as he remained silent. I wondered what it meant, if it was his personal welcome for a first-timer to Bali, a reaction to the many questions I had posed to Bama en route, or perhaps a blend of both. ◊ 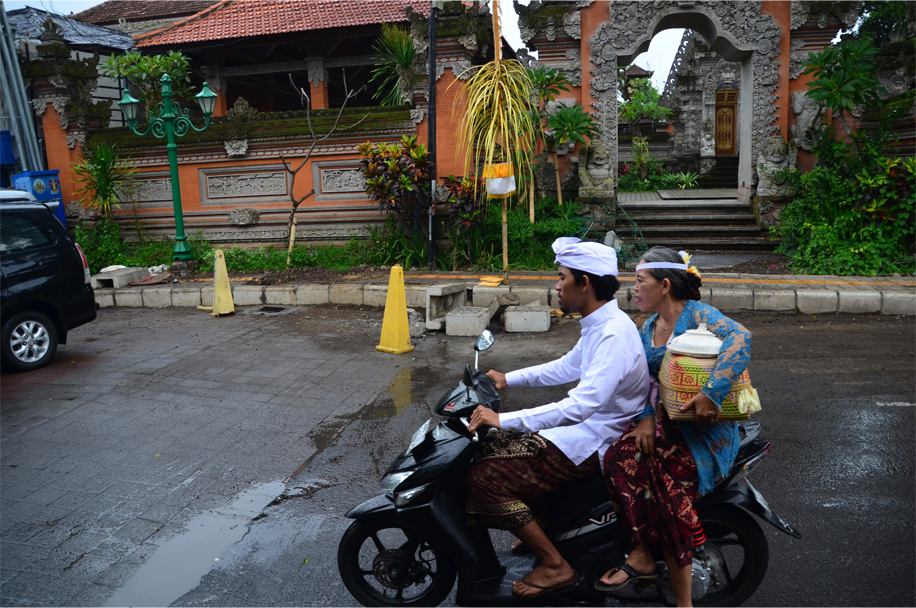 Mother and son en route to a ceremony 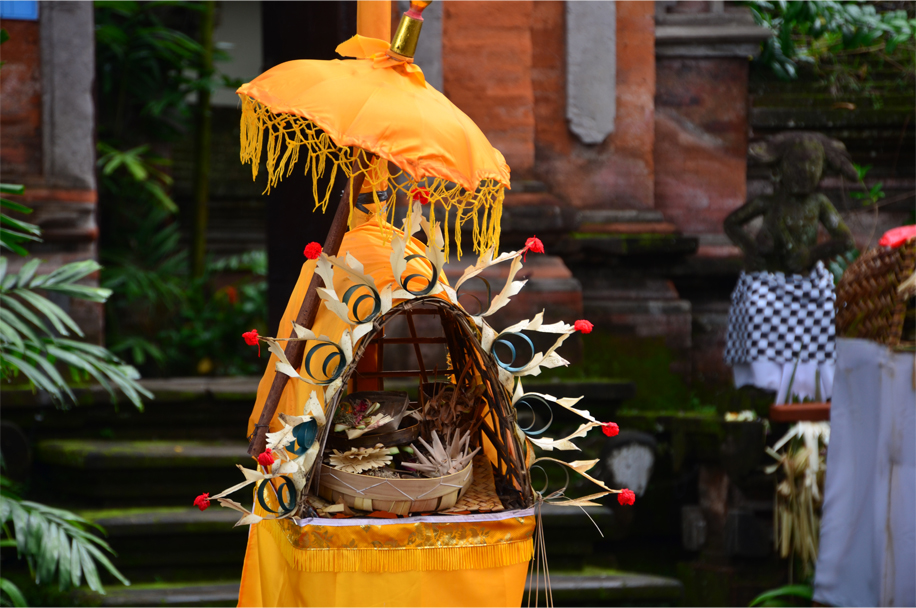 Spirit house on the main street 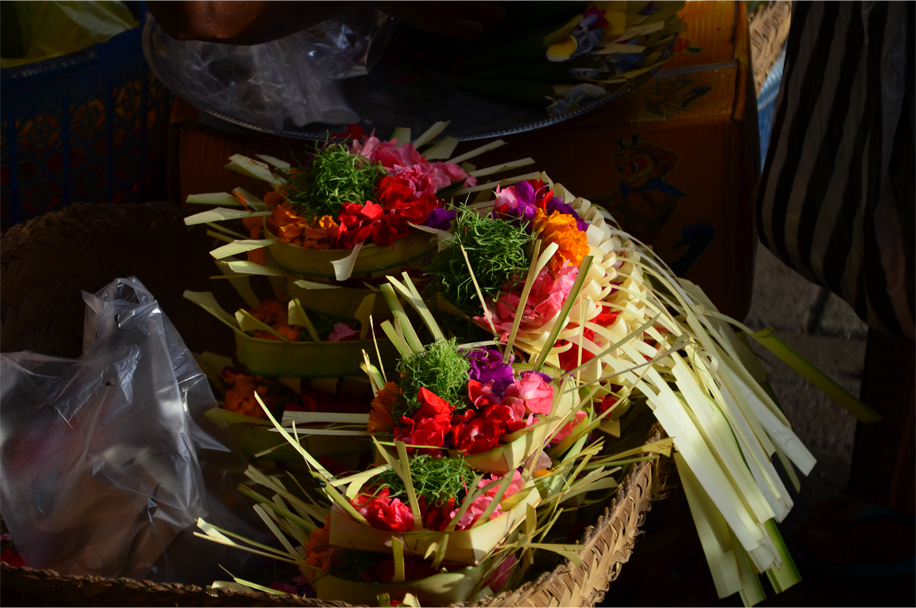 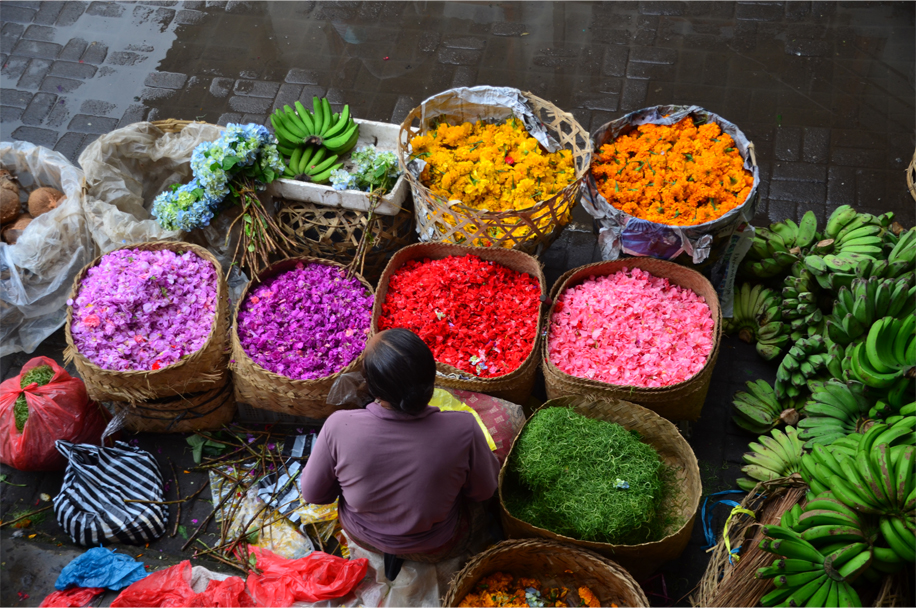 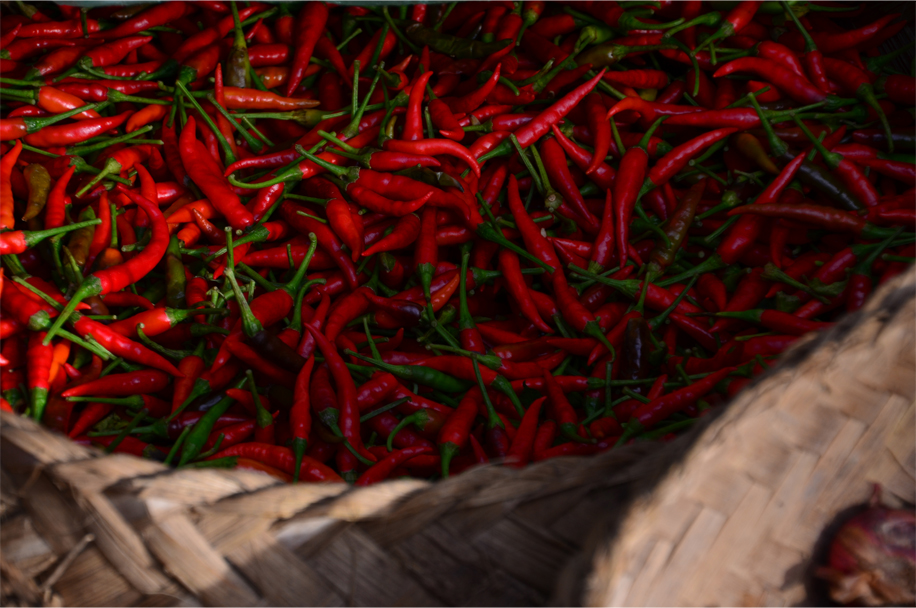 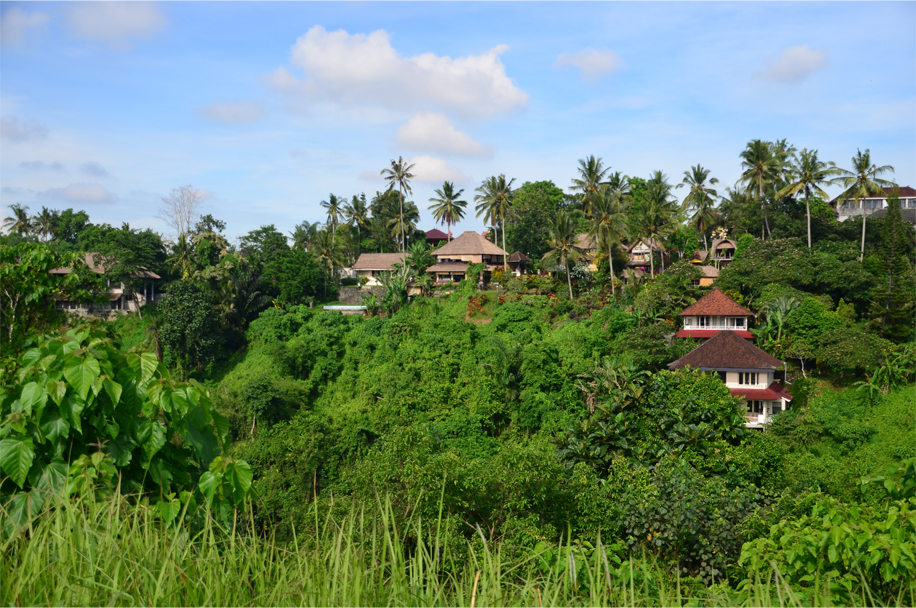 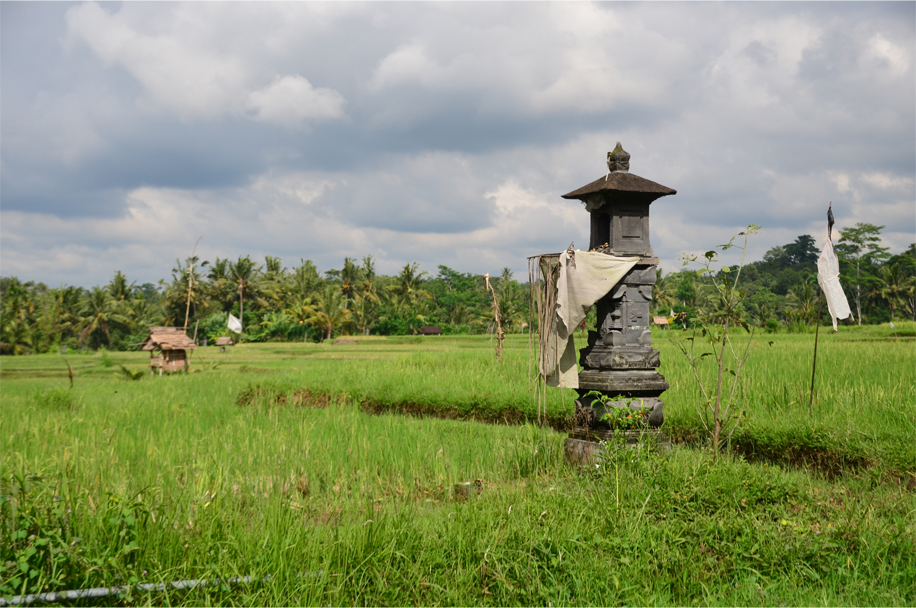 Gathering clouds on the paddies 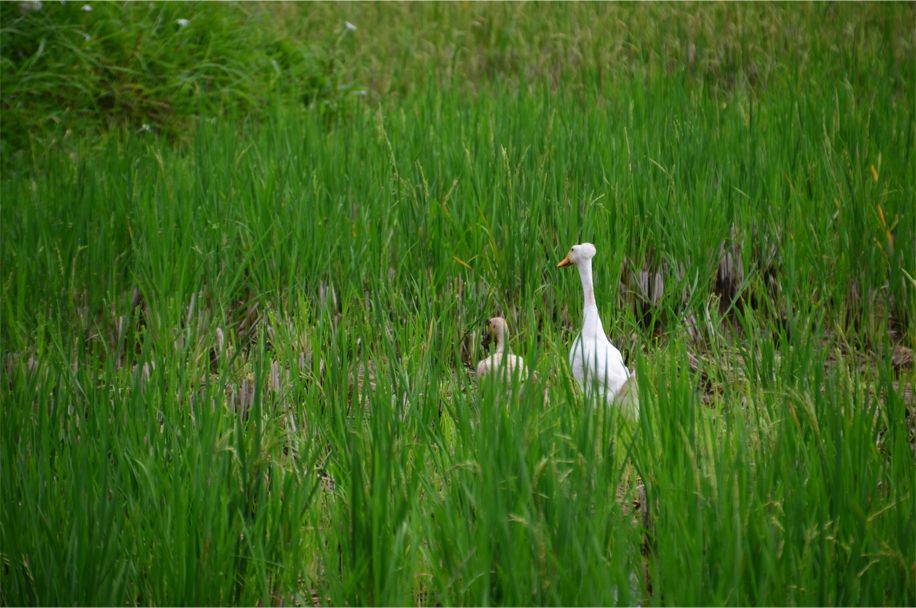 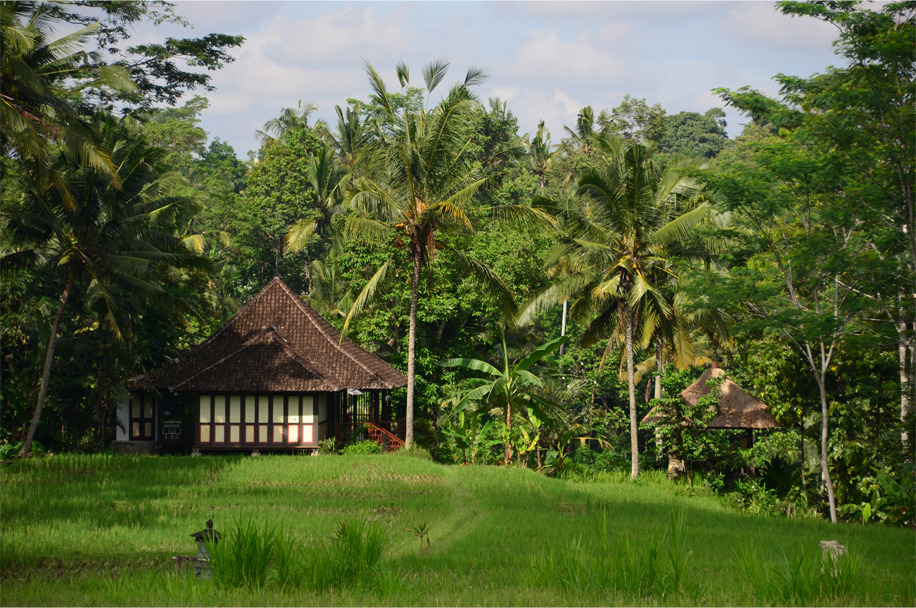 Tags: Bali, Indonesia, Travel, Ubud
From: Indonesia
← 2013: a year in review
A night at Ubud Palace →
47 Comments Post a comment