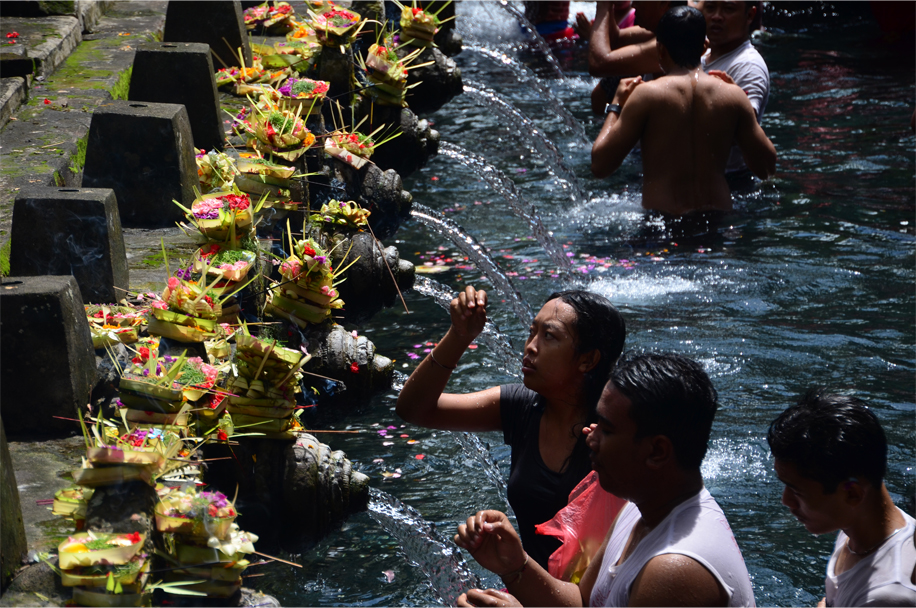 Beneath the crystal clear surface, black clouds sprang from the depths, continuously spreading in small plumes over a sandy bed. The spring bubbled into a rectangular pool enclosed in walls of black volcanic stone, its perimeter fringed with tufts of aquatic moss.

Pura Tirta Empul, ‘the temple of water gushing from the earth’, is over a thousand years old. Built in 926 AD around a sacred spring, the compound is a celebration of the life-giving element and one of Bali’s holiest sites. For centuries the faithful have congregated here from across the island, coming every 15 days for a tradition that is part ritual and part social affair.

Outside the inner sanctuary, the spring fed twin bathing pools whose spouts were piled high with fragrant offerings of canang sari. On a raised stone platform four young men – presumably students – sat cross-legged in prayer, clasping a single petal between their fingers. In a nod to its mythical origins, the waters of Tirta Empul are believed to grant spiritual blessing and cure disease.

Long ago there lived Mayadenawa, a king with great spiritual powers who was something of a shapeshifter. He had the ability to transform himself into anything he pleased, and although Mayadenawa started off as a reasonable ruler, the power inevitably went to his head. 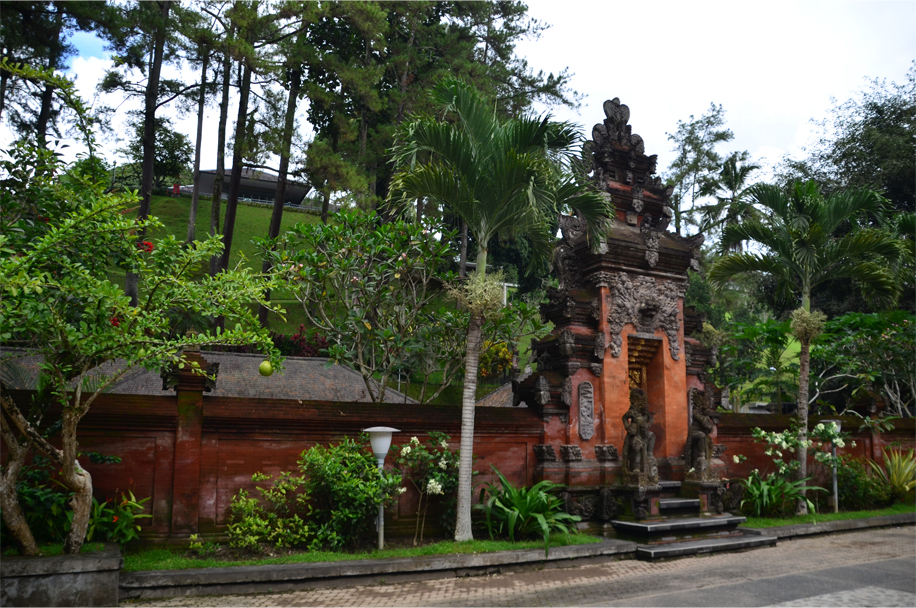 An entrance to Tampaksiring Palace 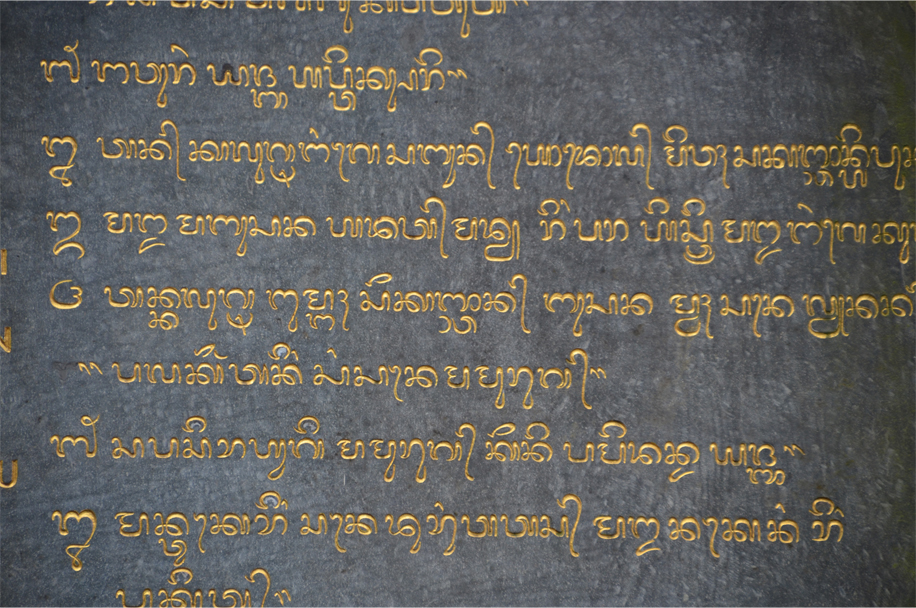 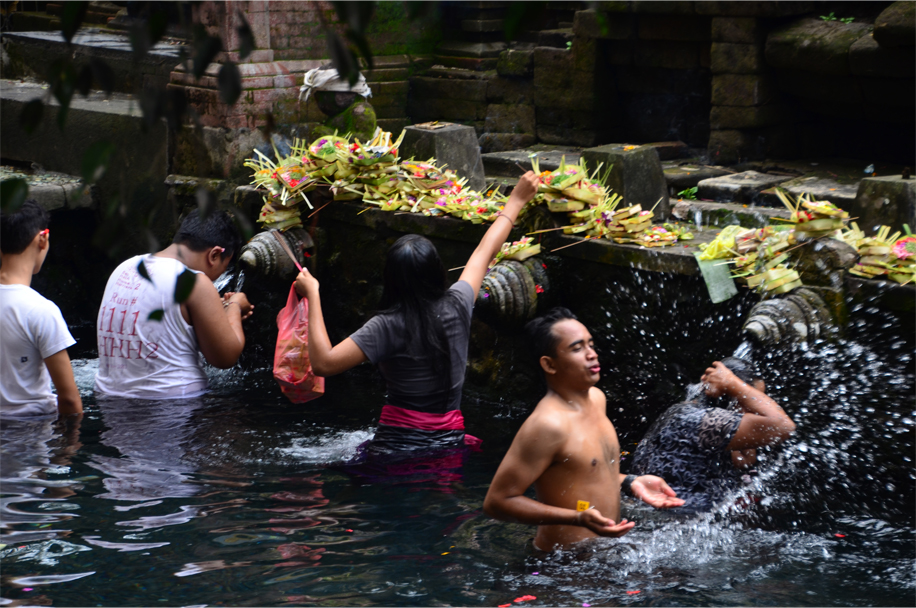 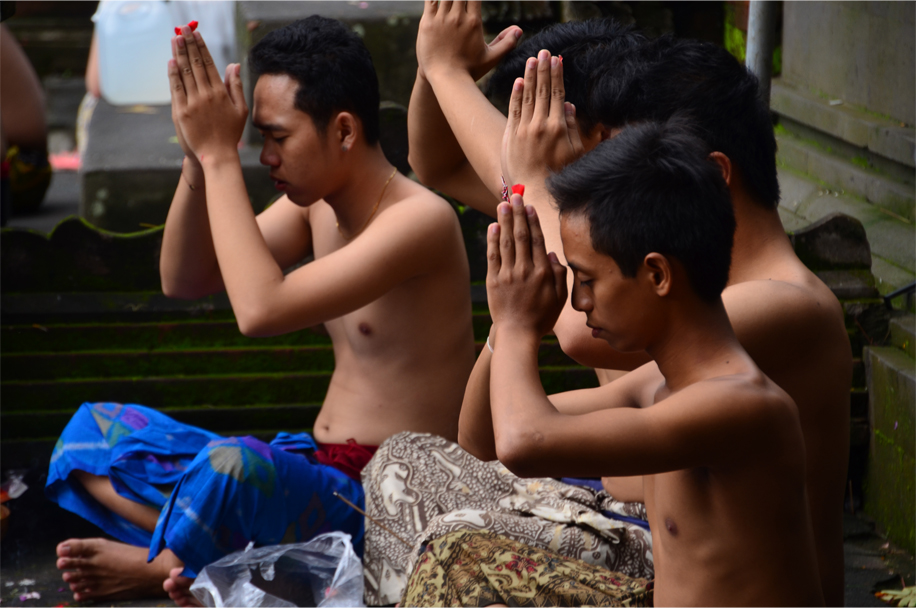 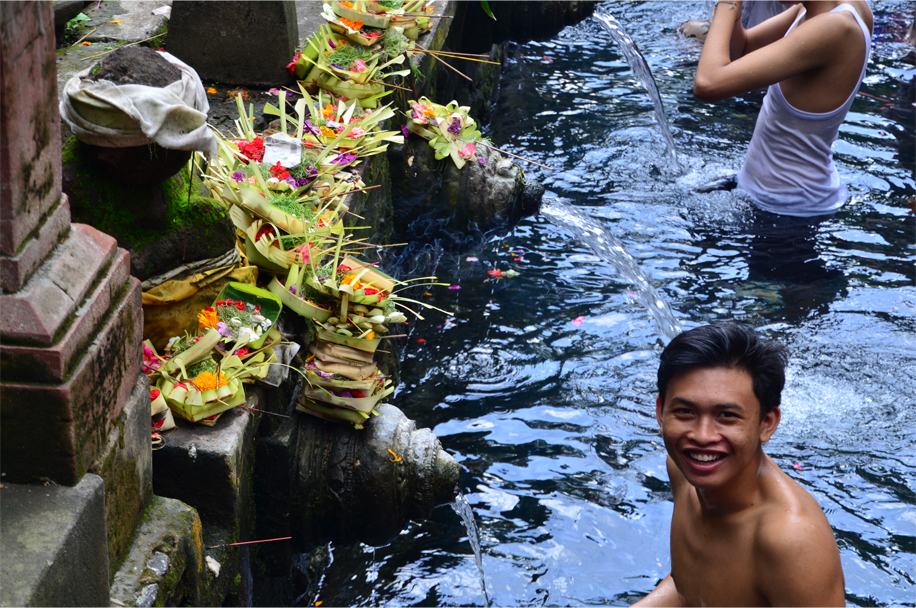 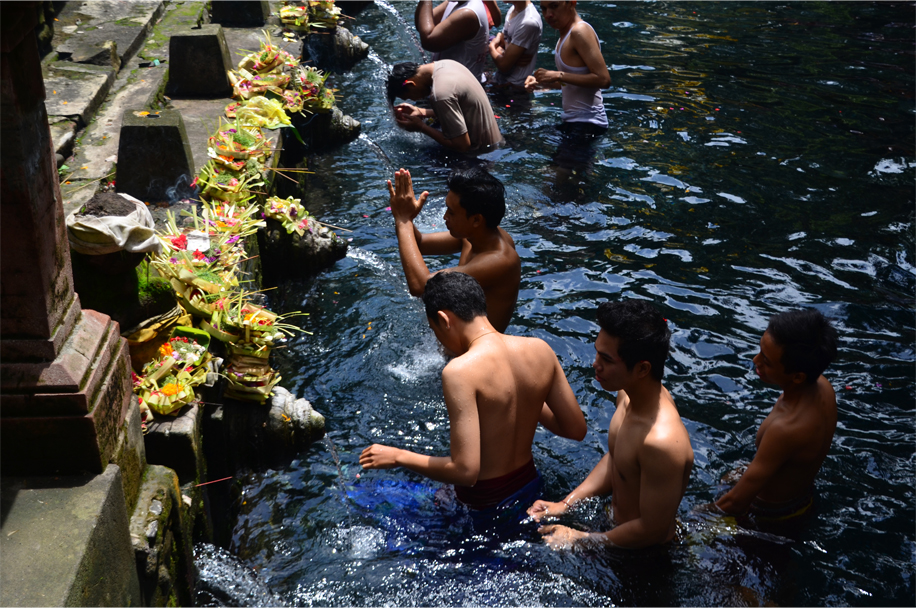 To stop the Balinese from worshipping their gods, he destroyed all the island’s temples, leading to crop failures, food shortages and an outbreak of plague. Mpu Kulputih, a powerful holy man, prayed for guidance at Besakih – which remains the ‘mother temple’ of Bali – and received a revelation from the earth god that help could be found in faraway India.

It is not know whether Mpu Kulputih himself went to India, but soon an army came down from the celestial realms, led by the god Indra. Although bitter fighting broke out, Mayadenawa’s troops realised the futility of the war and fled, leaving only the king and his assistant to fend for themselves. As night fell and all fighting ceased, Mayadenawa crept into his enemy’s camp, walking on the sides of his feet to leave no trace of his presence. To this day the valley where he passed is called ‘Tampaksiring’, literally ‘without imprints’ in Balinese. Legend has it that the evil king created a pool of poisoned water and left as quietly as he came.

When Indra’s troops awakened, they drank from the pool and fell violently ill. To restore his soldiers to health, Indra pierced the ground and created Tirta Empul, a spring whose waters overflowed to form the sacred Pakerisan River.

With his army revived, Indra went on hot pursuit as Mayadenawa transformed himself into a large bird, a breadfruit, a young coconut leaf and then a goddess. Each stage gave its name to several Balinese villages: Manukaya from ‘manuk raya’ (great bird), Timbul from ‘buah timbul’ (breadfruit), Busung from ‘busung’ (young coconut leaf), and Kedewata from ‘dewata’ (goddess). For his final transformation the king turned into a rock, but Indra was not impressed and killed him with an arrow. Mayadenawa’s blood formed the Petanu River, which would be cursed for a thousand years. It is said that blood and a terrible stench would come out of any rice field that used its water for irrigation. Today the death of Mayadenawa is still remembered as Galungan, held every 210 days when the Balinese celebrate the victory of goodness over evil.

But what of the cursed river? As the years passed and the curse presumably lost its power, a new crop was found that promised to bring great wealth. Rather than worry about growing fermented red rice from the Petanu, several villas and hotels were built instead… ◊ 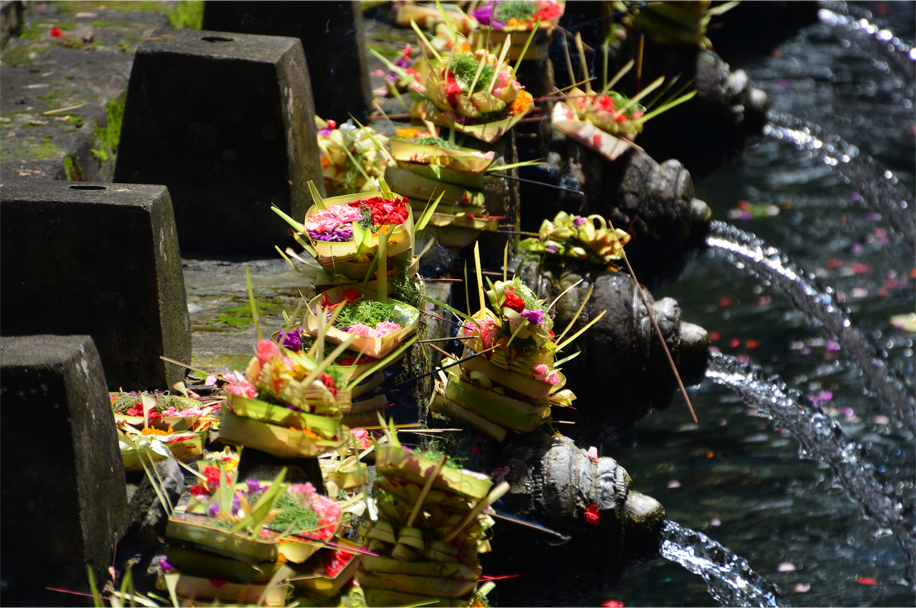 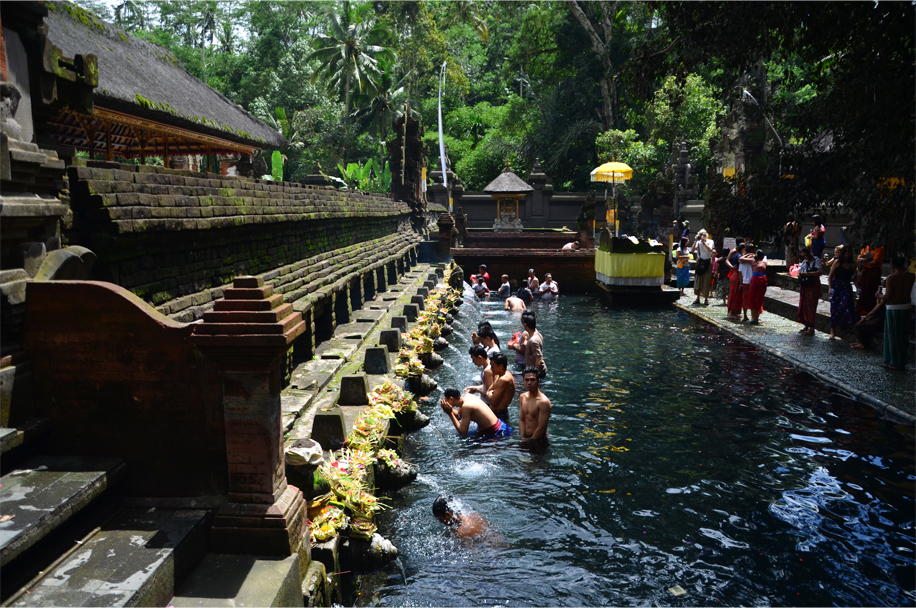 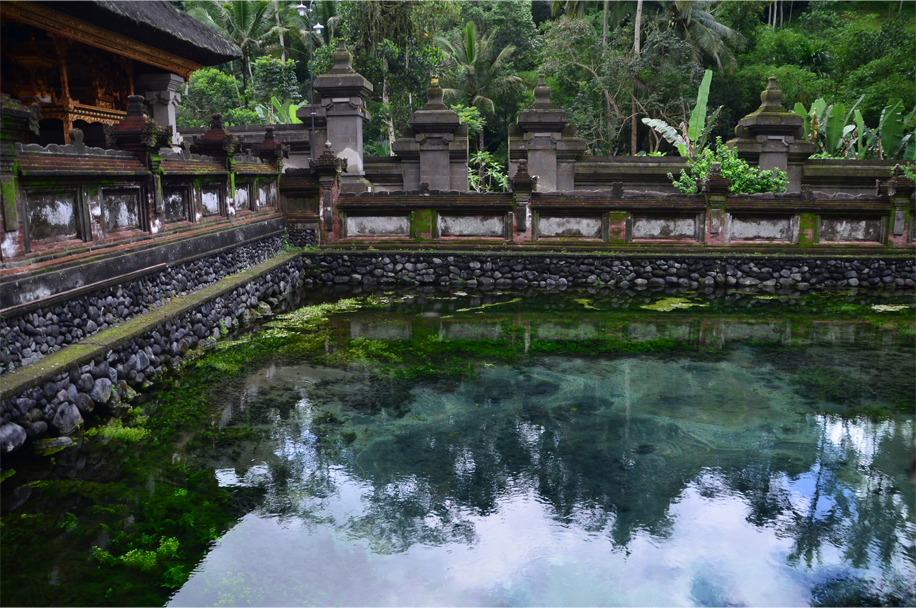 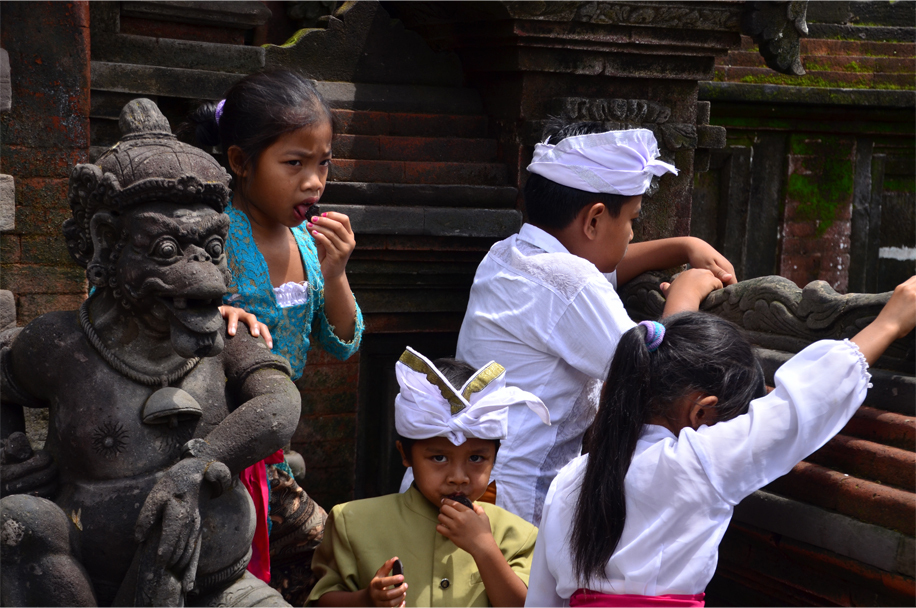 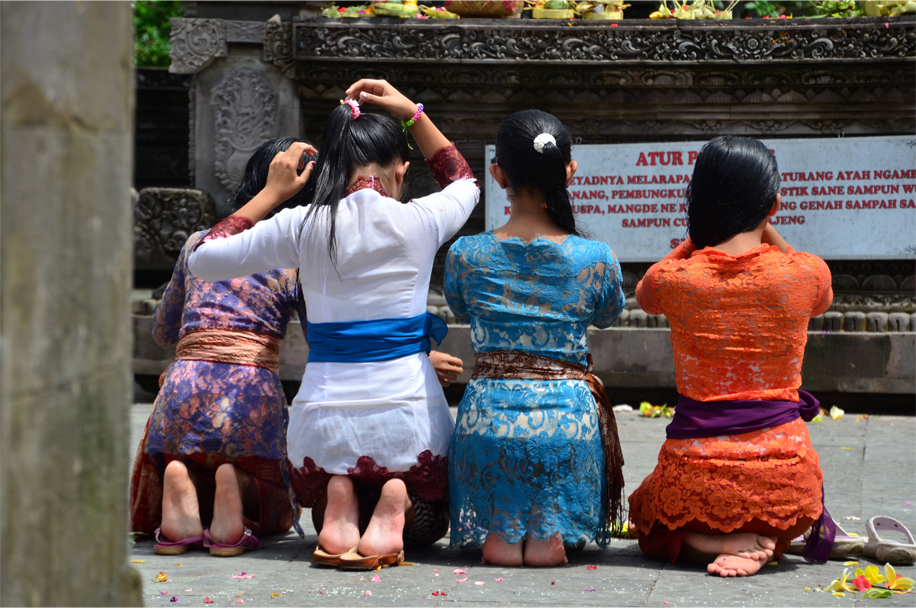 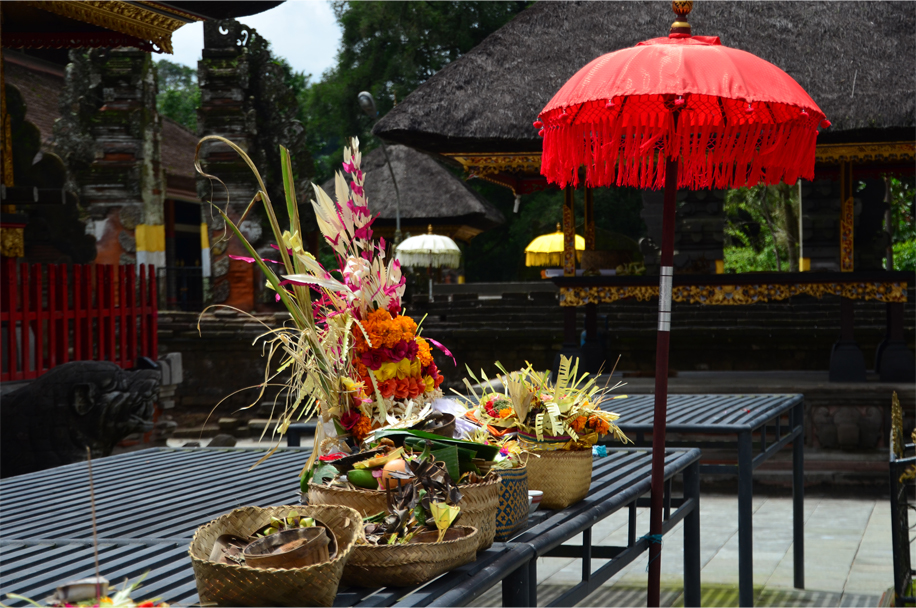 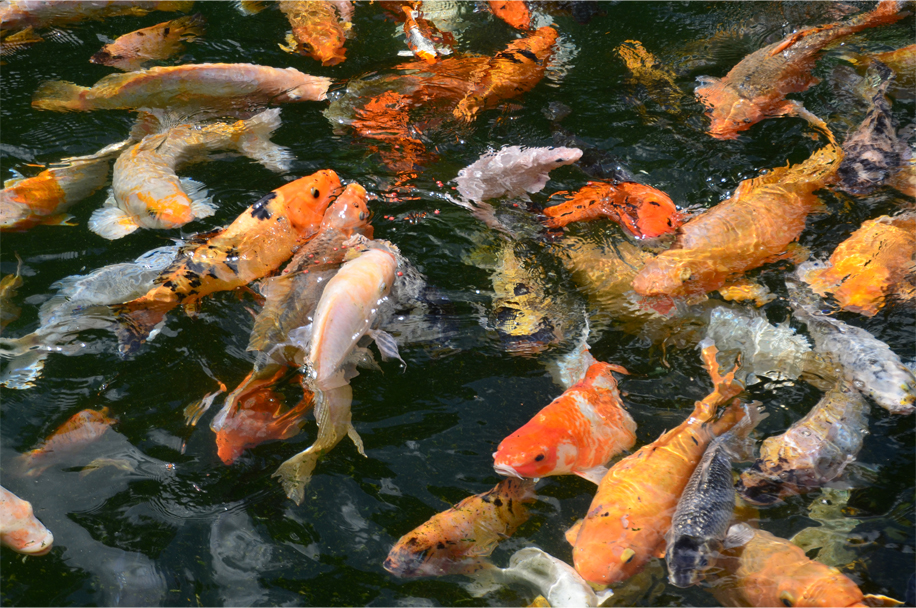 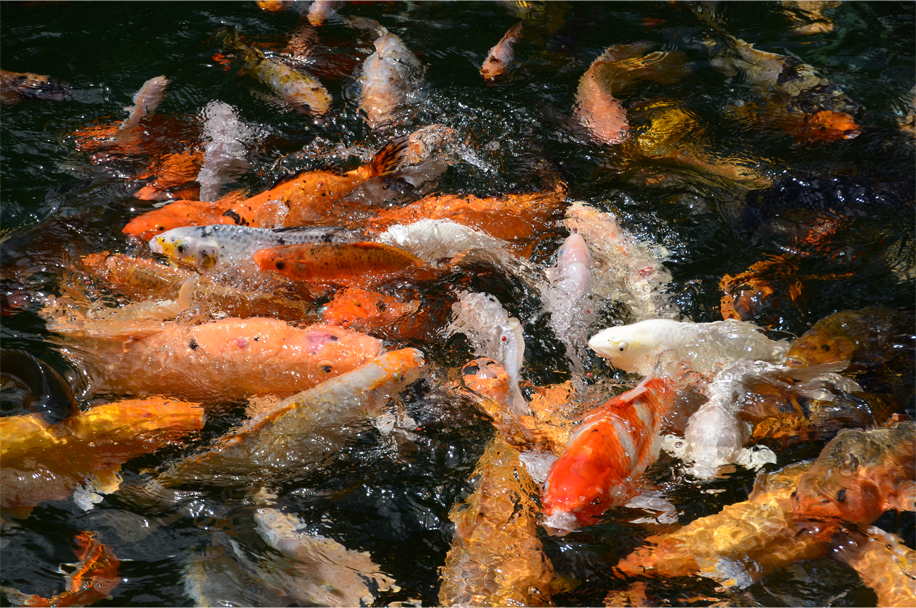