Hidden carvings and a bronze moon 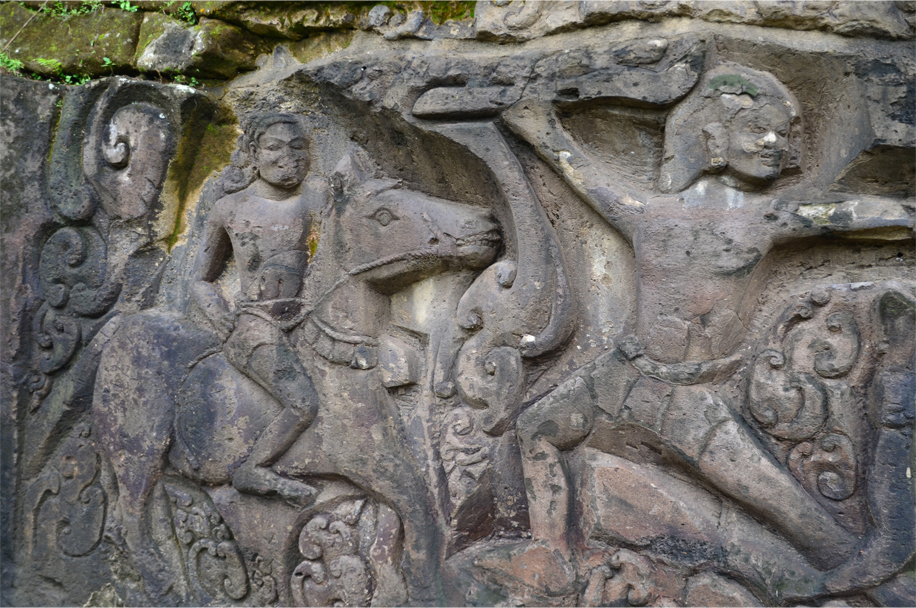 Off in the distance, a lone farmer waded foot-deep in the paddy fields, scattering nutrients over the rows of young shoots. The bucolic scene was but a short distance from Goa Gajah, the ‘Elephant Cave’, down a series of narrow roads lined by red brick walls, past an airy pavilion where local women in kebaya sat preparing food for a ceremony.

Two archaeological mysteries lie on the well-travelled road from Ubud to Tampaksiring, but few visitors make the effort to see them. Together with Bama and our guide Bli Komang, I found myself on a pathway snaking down a verdant slope, accompanied by the sound of running water in an irrigation channel cut skillfully into the rock.

Tucked away along the edge of a rice paddy, Yeh Pulu is a limestone relief some 25 metres long and two metres high, depicting daily life in the 14th-15th centuries: a water carrier weighed down with two jugs, maidens standing at doorways, and a hunter riding his horse into the forest. Still visible were two men holding a pole strung with two wild boars, perhaps a nod to the long-standing Balinese love of pork.

It was here, unexpectedly, that we began to get a feel for the island’s traditional building materials. Bli Komang explained that the smooth rock used to pave the ground came from Singaraja (on the north coast), while batu padas, the rare grey stone featured in many temples, was quarried from Silokarang, a village to the south of Ubud. He traced a finger along the joint between two layers of red brick, created and fired in his native Gianyar, saying that the mortar was made of sticky clay with no glue. 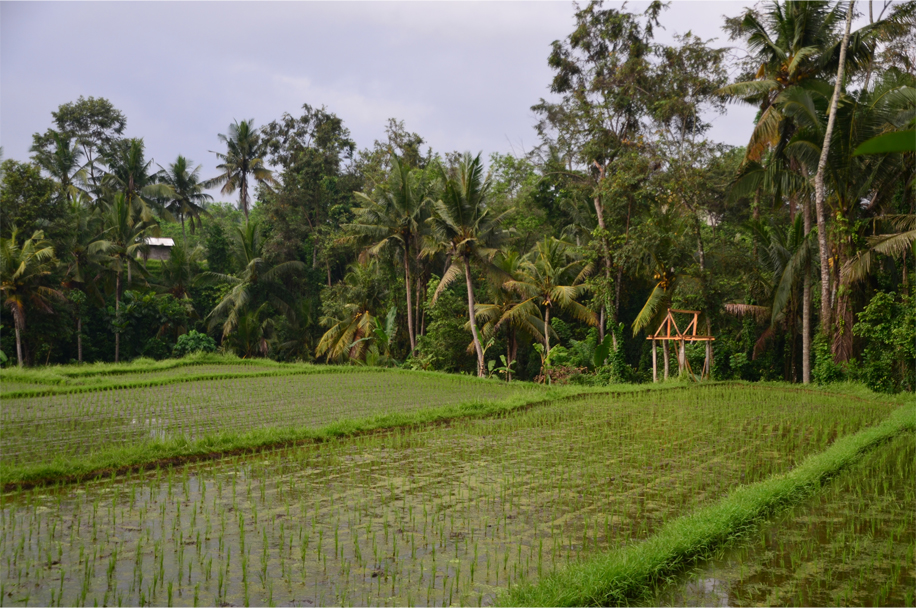 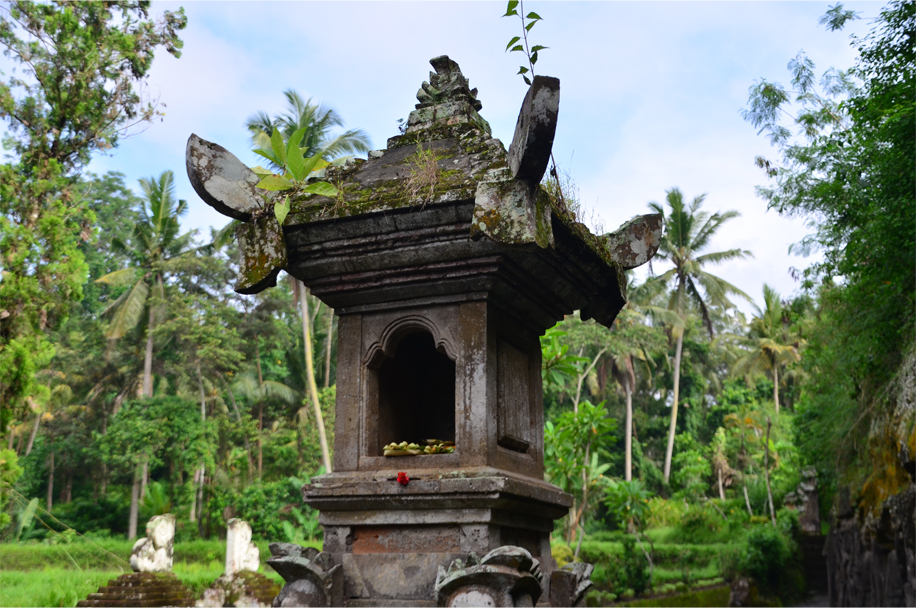 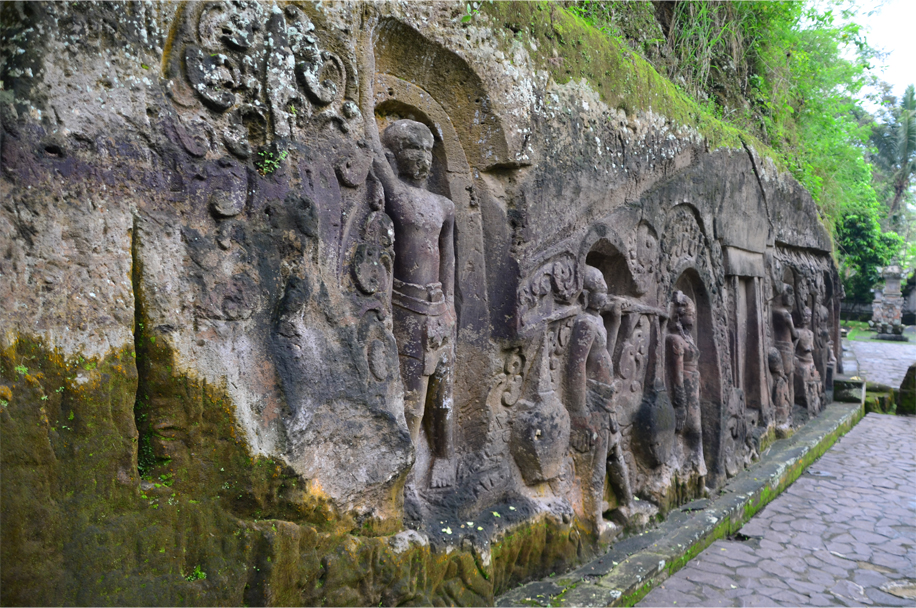 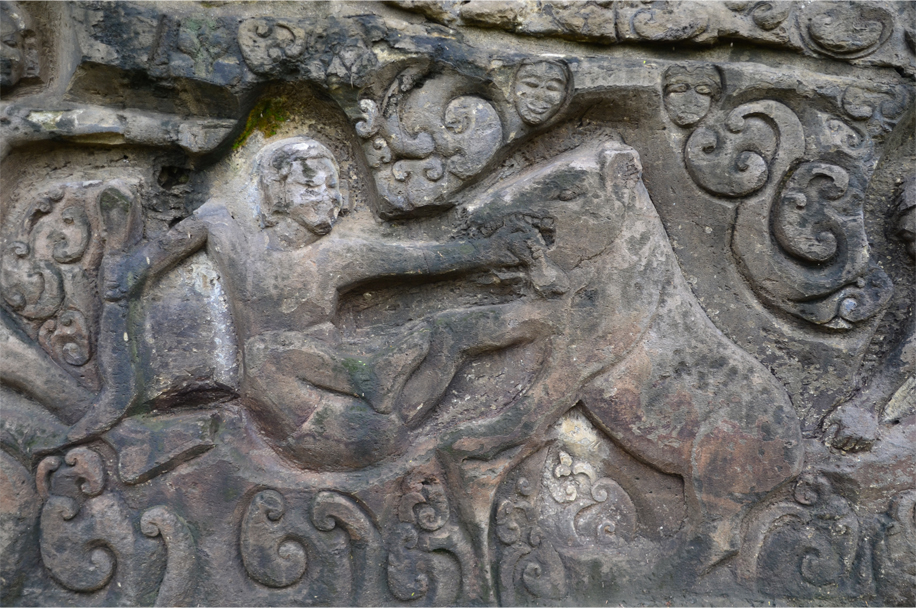 Wrestling with a boar 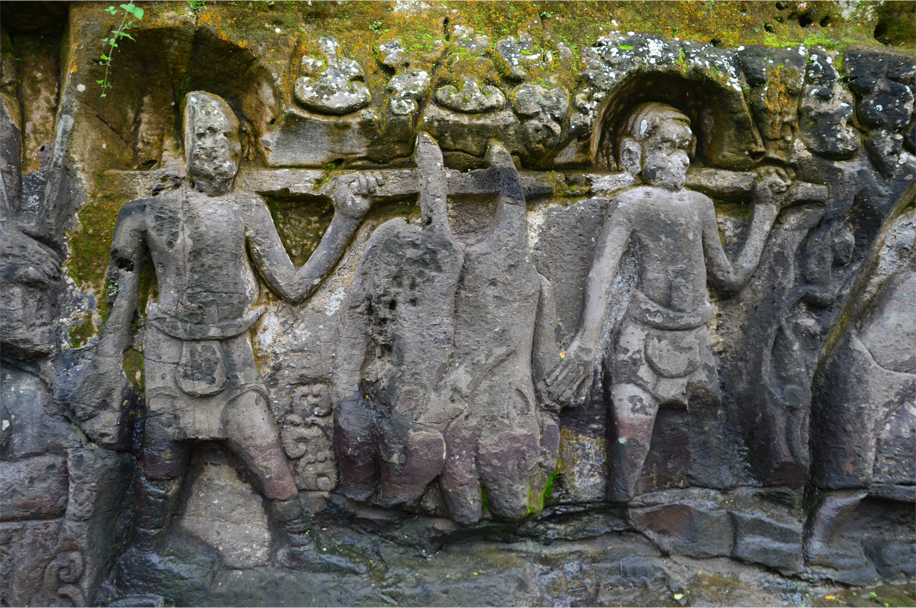 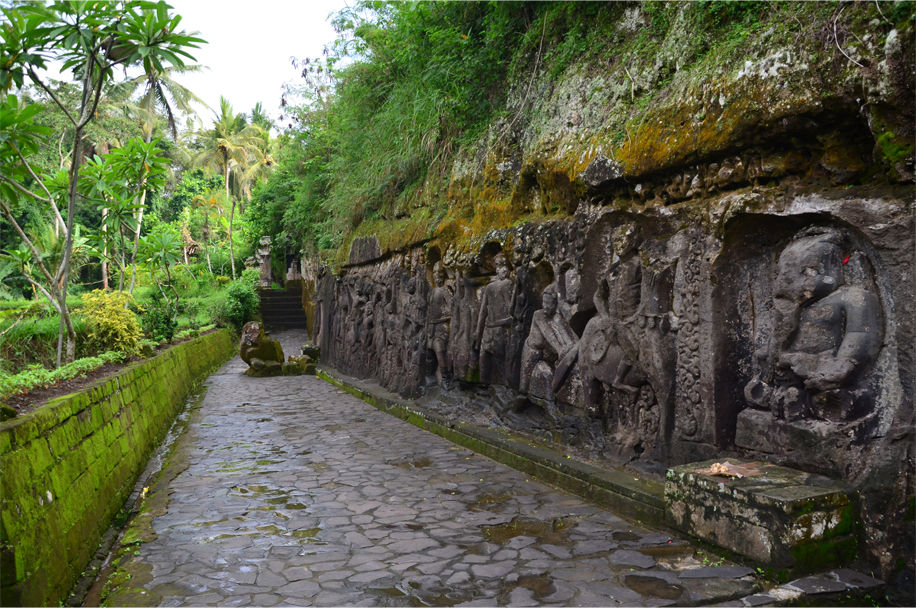 Just a short drive from Yeh Pulu, the temple of Penataran Sasih stood along the main road running through the village of Pejeng. Outside a group of women were perched high up on a bamboo scaffold, coating the eaves of the temple’s wantilan – the arts pavilion – in a layer of crimson paint.

Inside the compound, we marvelled at the gilded wooden pavilions roofed in ijuk (‘du’ in Balinese), harvested from the fibres around the trunk of the aren palm tree – an expensive material reserved only for temples and royal palaces. Bli Komang added with a mischievous smile that the aren was also used to create a local palm liquor, arak. “It is such an important part of Balinese culture,” he told us, “that it can never be banned.”

According to Bli Komang, a newly-built tower off the inner courtyard – with a small door some three metres off the ground – kept some of the temple’s precious objects away from prying eyes. But its most valued artifact was plainly visible in a pavilion directly opposite, marked with the words Cagar Budaya Nasional – “National Cultural Heritage”. This was none other than the Moon of Pejeng, an impressive bronze kettle drum more than 2000 years old.

Historians believe that the Moon of Pejeng was once used in rice cultivation rituals, and that it was closely related to the elaborate drums of the Dong Son culture in northern Vietnam. No one knows how it came about, or who was responsible for casting the instrument, but the Balinese have a colourful legend to explain its existence.

Long ago it was said that the moon was driven in a chariot across the night sky, with wheels that glowed nearly as brightly as the moon itself. As the chariot passed over Pejeng, a wheel came loose and fell to the earth, lodging itself in a tree. Its dazzling brilliance, which lit up the surrounding area, so annoyed a passing thief that he urinated on the drum. At this the wheel lost its luster and exploded, killing the thief as a punishment for his sacrilegious deed. The villagers of Pejeng eventually had it brought to a nearby temple, where the ancient single-cast bronze kettle drum – the world’s largest – is venerated to this very day. ◊

Tending to his crops 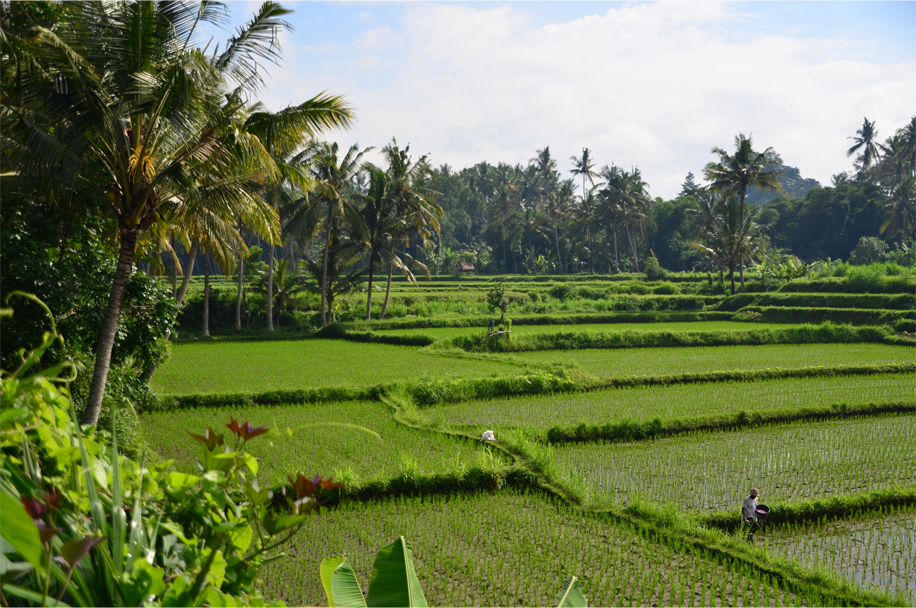 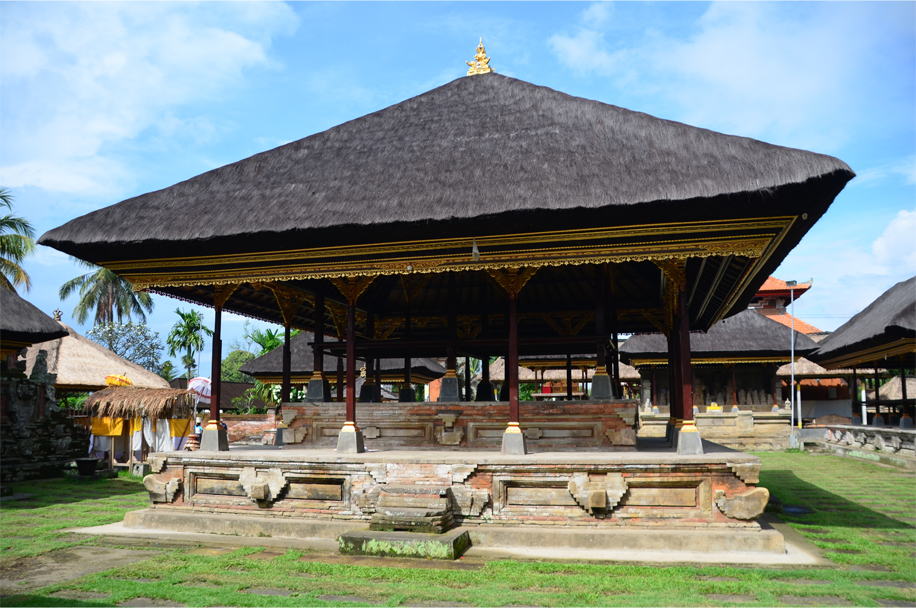 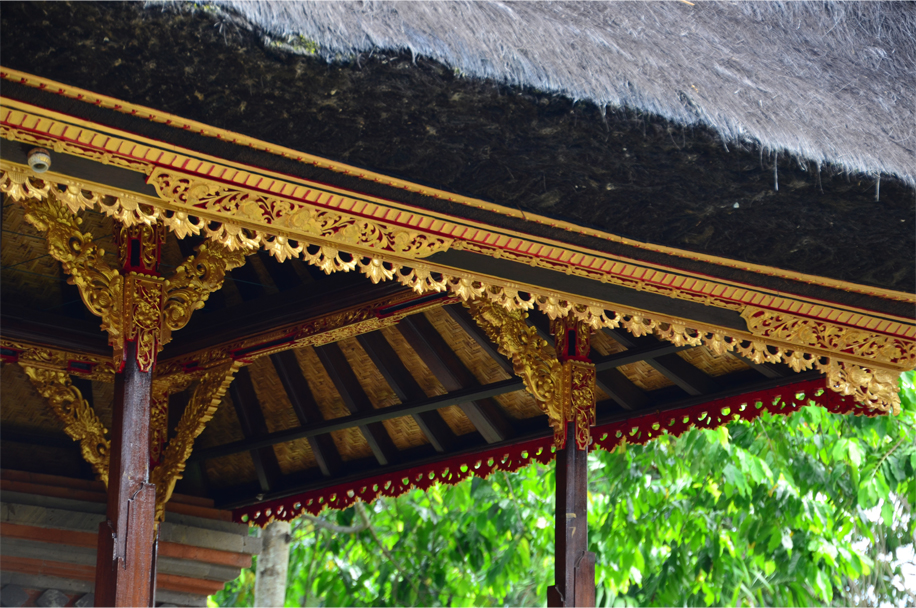 The Moon of Pejeng