Eastern Eden: the gardens of Karangasem 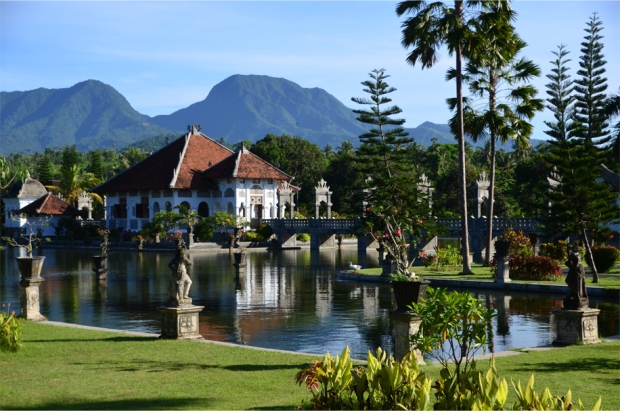 Bama was convinced. After five visits to Bali, he had just found his favourite place on the island. At a quarter to eight we were among a small handful of visitors in the grounds of Taman Sukasada Ujung, a water palace and pleasure garden once built for the local king.

Beyond the trees and manicured lawns we laid eyes on the sumptuous bale kambang, a ‘floating pavilion’ perched in the middle of a man-made pool. Here the morning light cast fluid, dappled shadows as it bounced off the water and flickered in the eaves.

Ujung is the Indonesian word for ‘end’ or ‘extremity’, and the water palace shares its name with an adjacent black sand beach, which lies just down the coast from Bali’s easternmost tip. Today ujung is not only descriptive of a geographic location; in its solitude the palace grounds are far removed from the madness and traffic jams of Kuta.

Although the oldest pool dates from 1901, the foundations of Taman Ujung were laid in 1919 during the reign of I Gusti Bagus Jelantik, better known by his noble title Anak Agung Anglurah Ketut Karangasem. The monarch enlisted the services of one Dutch and one Chinese architect, alongside an undagi, a traditional Balinese designer and architect whose role was held to be sacred. It was the undagi who was believed to have taksu, or divine inspiration, ensuring that Taman Ujung would adhere to the principles of Tri Hita Karana – harmony between humans, God and the environment.

And so the royal retreat took on a distinct fusion of European and Balinese styles. Inside the austere rooms of the bale kambang, we discovered old family photos, a traditional altar and several items of European furniture painted in white and gold. 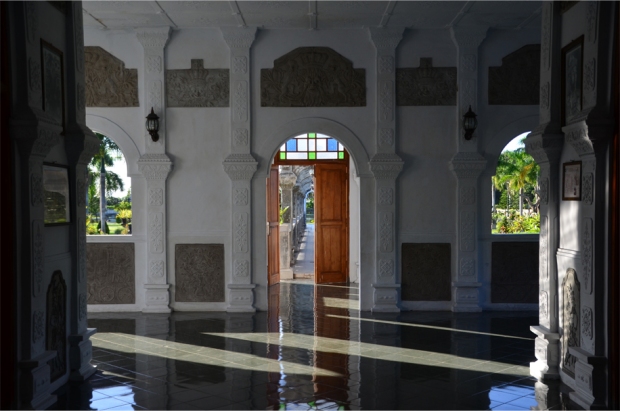 A blend of Balinese and European styles

Bridge from the ‘bale kambang’

But the glory of Karangasem’s garden palace was short-lived. In World War II the occupying Japanese dismantled its iron bars to create weapons. After Indonesia’s independence Taman Ujung was brought to its knees by the 1963 eruption of nearby Mount Agung, which rained showers of hot ash on the complex. What was not destroyed by the volcano was leveled in a powerful earthquake that struck eastern Bali in 1979.

For several decades the descendants of the royal family struggled to raise money for its reconstruction, until the World Bank and the Indonesian government stepped in. Taman Ujung was faithfully rebuilt over a period of four years, finally reopening to the public in 2004.

Although the restoration is more or less complete, part of Taman Ujung’s appeal lies in the fact that much is still left to the imagination. Up the slope from the bale kambang stands a roofless stone pavilion, left in its original ruined state. Looking out over the palace grounds, it’s not hard to envision how it all was in its heyday. The laughter of royal children playing hide-and-seek among the trees, a ring of lanterns decorating each of the three pools, and the sound of a gamelan orchestra emanating from a secluded pavilion as the eroded ridge of Mount Lempuyang rose into dusky violet skies… in the east, the darkening sky over an endless sea, and to the northwest, as ever, the mighty presence of Agung. 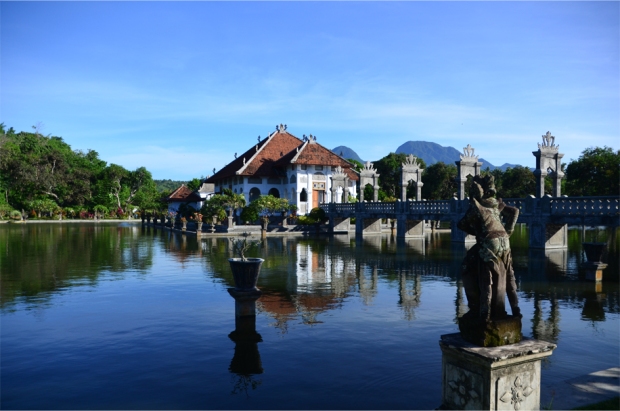 Morning on the edge of Bali 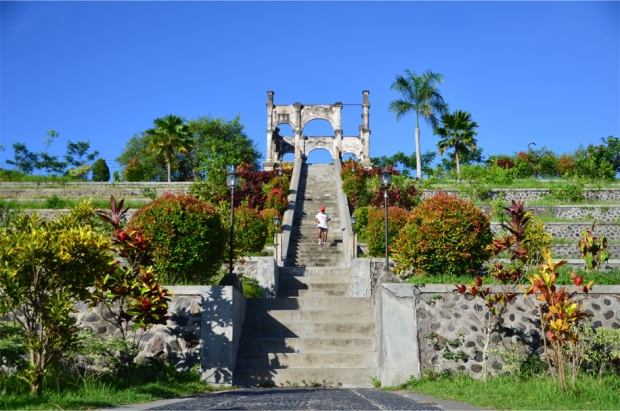 The unrestored ‘bale kapal’, for watching ships coming to shore 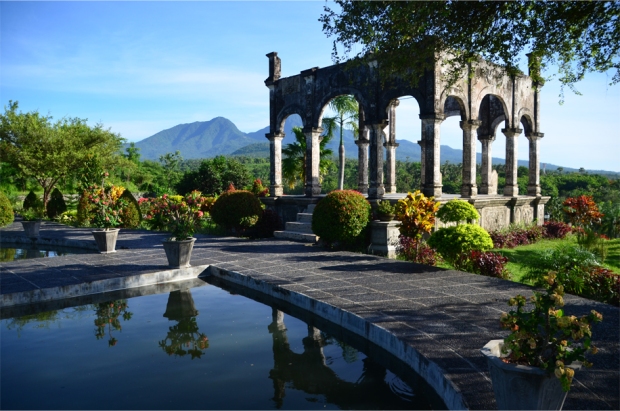 A view of Taman Ujung, with Mount Lempuyang in the distance 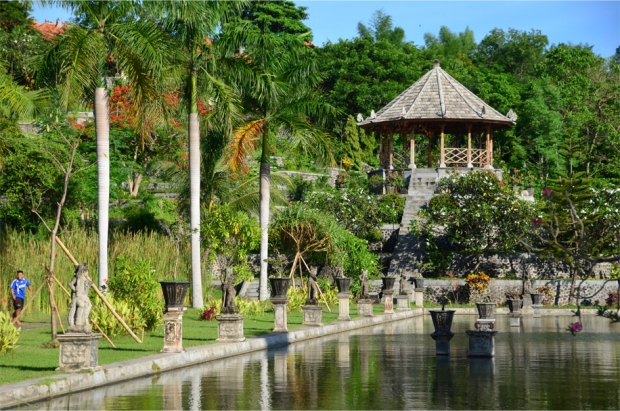 A wooden ‘bale’ amid the trees

On the volcano’s southeastern slopes, less than nine kilometres from Taman Ujung, the same king built another set of gardens around a spring beneath a majestic banyan tree. The spring was venerated for its medicinal properties – it was believed that bathing in these waters on the full moon would cure sickness and grant the bather lasting youth. For this reason the monarch named the holy spring Tirta Gangga, or ‘Blessed Water of the Ganges’.

Inspired by a tour of Versailles, construction of the water palace began in 1937, but was soon interrupted by war and only finished in 1948. 15 years later the water palace was almost completely destroyed by the same eruption that ravaged its counterpart at Taman Ujung. But a series of restorations have since recovered much of its former glory.

The lush gardens are dominated by the eleven-tiered Nawa Sanga fountain, 10 metres high and shaped like a lotus, its spray breaking into thousands of iridescent beads as the sun’s rays pierced the clear morning sky. We were drawn to the Mahabharata pond, decorated with a grid of guardians from the great Hindu epic, each one holding a cudgel to symbolise the struggle of men between Gods and demons. Bama and I ambled along the stepping stones threading between the statues, as golden carp darted in the shallow waters beneath our feet.

A sculptural fountain in the form of Garuda, a mythical bird

The Mahabharata pond at Tirta Gangga 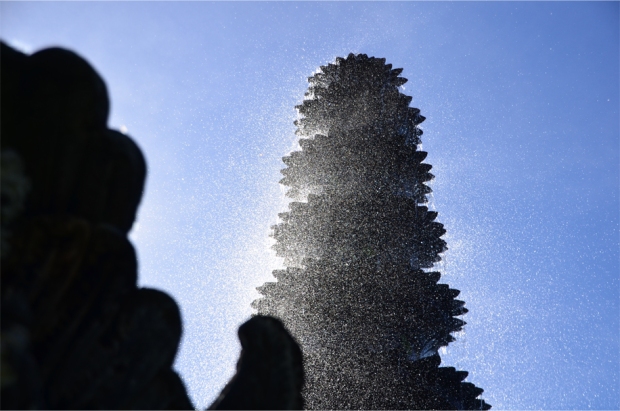 Frozen in time at the Nawa Sanga fountain

Despite its French inspiration, Tirta Gangga is a classic expression of Balinese Hinduism with a highly symbolic layout. The gardens are divided into three levels according to the concept of Triloka, which orders the cosmos into Swah, the upper world of Gods; Bwah, the middle world of men; and Bhur, the lower world of demons. Sculptures in each section correspond to their status within the cosmos, while the forces of good and evil – represented by Barong and Rangda – are placed at opposite ends of the main fish ponds.

The water palace was not only a recreational space for royalty, but it served a religious function, supplying holy water for ceremonies, and its spring was also a source of drinking water for the local populace. Meanwhile the royal ponds were used as reservoirs to irrigate the surrounding rice paddies. Two of its pools are now open for public bathing; even today, Tirta Gangga is a wonderful example of Tri Hita Karana in action. ◊

Bridge of dragons (known as ‘naga’)

An island in the lower level, or ‘Bhur’ 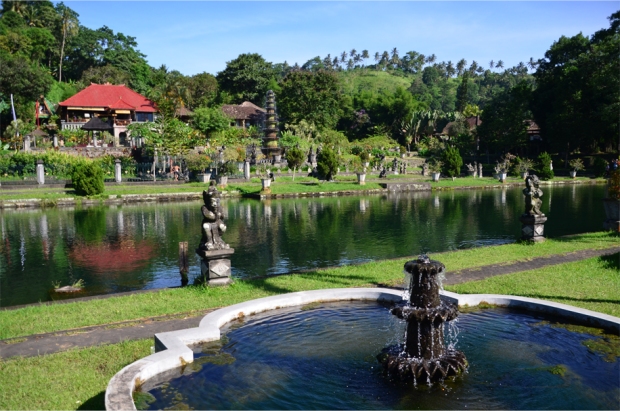