A temple trio: Besakih and beyond 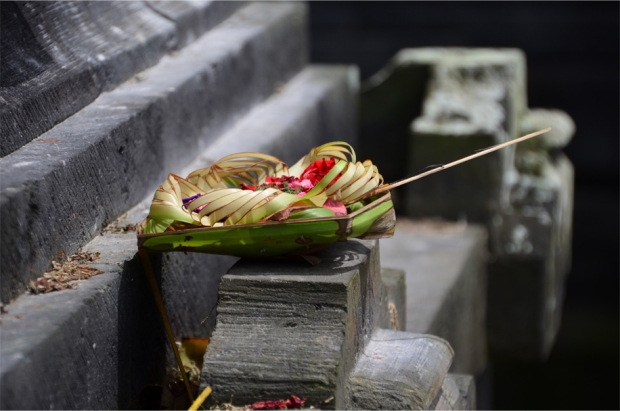 As we trundled down a busy artery towards Sanur, a mellow beach town in southern Bali, I grasped at the scant words I knew flowing back and forth between Bama and Bli Komang.

“Before becoming a driver, he used to be a sculptor,” Bama relayed. We soon learned that Bli Komang hailed from a village of stone carvers, and that the Balinese love of art – such an integral part of their culture – was instilled in him from an early age. According to Bli Komang, all Balinese students had to choose from four kinds of traditional arts: dance, painting, decorative sculpture, and carving statues.

His own choice was in decorative sculpture, and as we sped past a stone fence rich with intricate patterns, I asked, via Bama, if he could carve to that same level of detail. “Bisa!” he said. “I can!” With a broad smile, Bli Komang revealed that he could carve directly on a block of stone without needing to draw a sketch.

Our driver’s artistic training explained his insights at each place we visited; without being prompted, he had pointed out where the stones were stacked together without the aid of mortar, along with the precise origins of each building material – down to the name of the nearest village. At Pura Goa Lawah, an important temple built around a holy bat cave, Bli Komang touched the rich black stone as we leaned against the wall, observing a throng of kneeling devotees mid-ceremony. “This is all from Mount Agung’s eruption in 1963,” Bama translated, “[Quarried] near Besakih.” 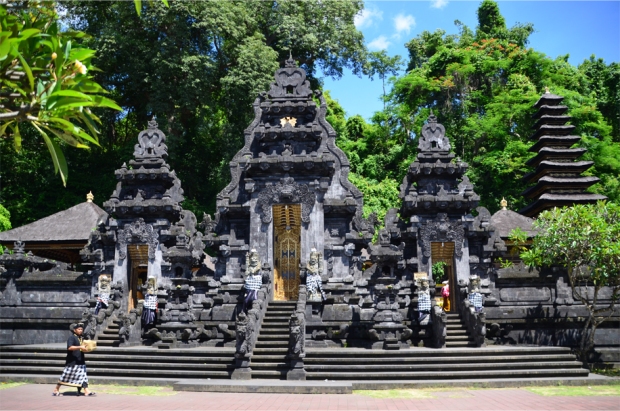 Note the gilded bat above the central gateway

A moment in prayer

Offerings before the bat cave 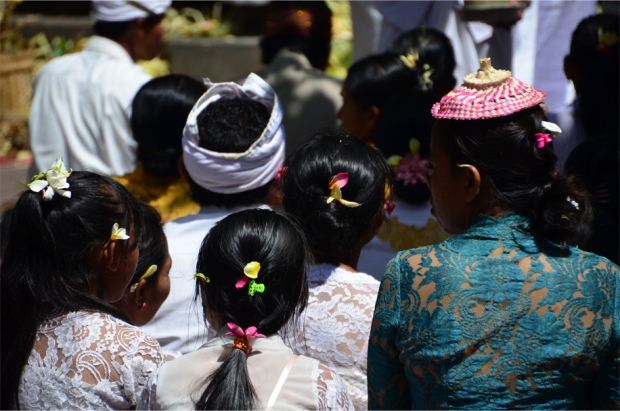 Decked out in ceremonial dress

The cave at Goa Lawah temple is said to extend all the way to Pura Besakih, 30 kilometres away, the holiest of Bali’s nine directional temples believed to protect the island from evil spirits. Over a thousand years old, it was built in honour of the legendary giant snake Naga Basuki, the resident cave-dwelling reptile in charge of keeping the earth in balance. Today the vast complex is revered as the ‘mother temple’, which Balinese Hindus visit every 210 days during the festival of Galungan.

Pura Besakih sprawls across a network of terraces on the southwestern slopes of Mount Agung, Bali’s highest, most venerated, and – as an active volcano – its deadliest peak. Agung last erupted in 1963, blowing off 100 metres from the mountaintop, killing nearly 2,000 people and devastating eastern Bali. Its lava flows came extremely close to destroying Besakih, missing the vast complex by mere metres at times.

The temple has since become a major tourist attraction, and sadly a victim of its own popularity. Here we were confronted with the dogged persistence of children selling postcards inside its courtyards and the reality of vendors overcharging on all kinds of goods; at times it felt more like a market than a place of devotion. Bli Komang escorted us past the infamous ‘guides’ known to prey on foreign visitors, lamenting that even for the local Balinese, a nasi campur (mixed rice) could cost up to 100,000 rupiah. 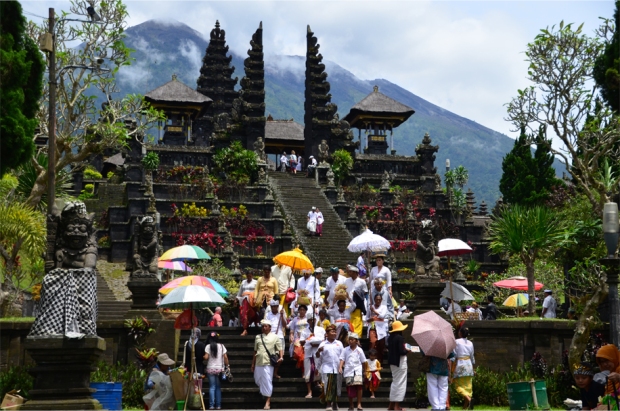 Inside the ‘Mother Temple’ of Balinese Hinduism 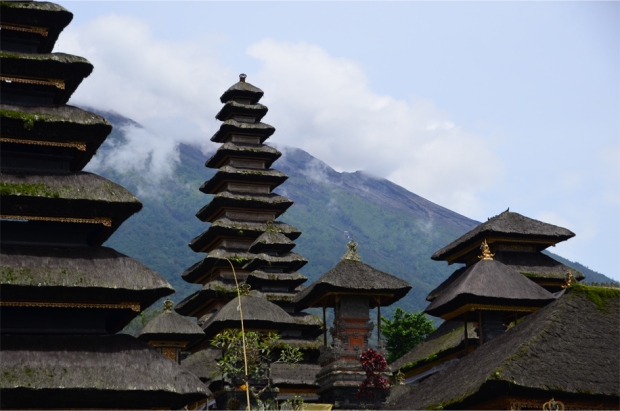 A cascade of ijuk roofs

Still, there was no doubting the holiness of the place for him – as we ascended the steps up to the iconic split gateway, he gently chastised two women in baggy trousers that would otherwise be acceptable in a lesser temple setting. “Ibu-ibu, you must wear sarung to go into the temple.” They smiled and carried on, ignoring his remark.

That morning Bli Komang had greeted us in a traditional Balinese sarung, patterned in golden fabric and delicately embroidered in silk – a dramatic change from his usual jeans. “I don’t feel comfortable wearing normal clothes to Besakih,” he told Bama. And he had two brightly coloured sarung for us too, with matching sashes to fasten them around our waist.

Near the top of the complex, I looked out over the roofs of ijuk thatch and pagoda-like meru marching down the mountain. It was here that Bli Komang turned to me with an expectant grin. “Bagus?” He asked. “Good?” Although I disliked the rampant commercialisation of the ‘mother temple’, I nodded. “Ya, Bagus!”

For us, the antithesis of Besakih came in an unexpected treat on our final day in Bali. Bli Komang had noticed Bama’s enthusiasm for sculptural details, and after the Barong performance at Batubulan, he drove us to the neighbouring village of Singapadu to see its Pura Puseh and Pura Desa, two functionally different temples housed in the same compound.

Bli Komang did not say much about the twin temples, except to mention that they were very old and had sculptures like no other. He was right. Almost every surface was encrusted with carvings, a riot of detail that culminated in several impressive gateways that loomed over the nearby pavilions. Swinging open a low metal gate, he told us that local residents would come once every six months for ceremonies, and we soon came across a lone man dutifully sweeping the inner courtyard. It was then that I realised we were being shown around Bli Komang’s local temple, for the man was none other than his own uncle. ◊ 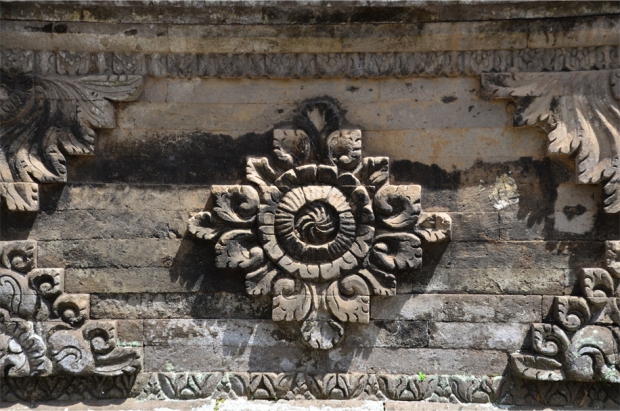 Beautiful reliefs on the outer wall 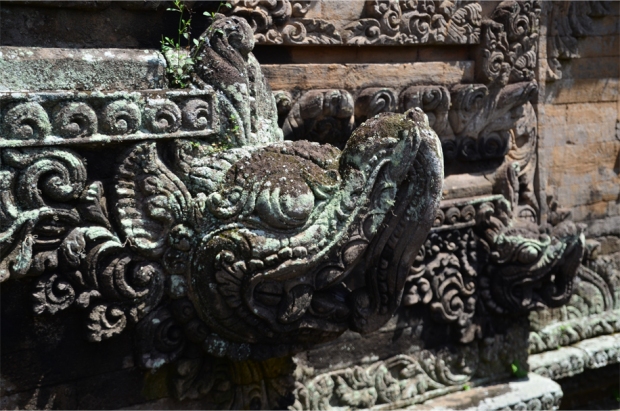 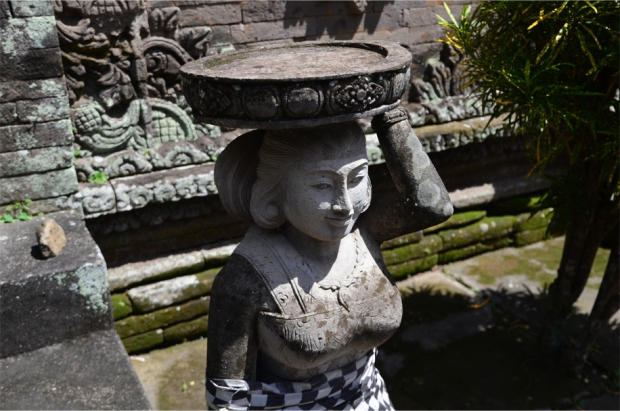 A rice granary, or ‘lumbung’