Across the valley banks of mist swirled above a church steeple poking through the dense vegetation. From the Trans-Flores Highway Dino had glimpsed the crest of Kelimutu through the clouds, and we soon found ourselves gunning up a slender road towards the summit.

Kelimutu means “mountain lake” in the local language (Keli is mountain, mutu is lake), but its ordinary name suggests none of the trio’s unique traits. Although they originate from the same volcano, each has its own palette of changing colours dictated by the minerals within. Two of the lakes are also dangerously acidic, with pH levels hovering between 0.4 and 1.9.

According to legend, Kelimutu is actually a family of four: father “Konde”, mother “Ratu” and their children “Tomi” and “Nombu”. But Nombu the daughter lake cannot be seen as she exists in the spirit realm. Dino had told us this upon reaching a viewpoint on the crater rim, after treading through a mist-laden forest on a path carpeted infallen pine needles.

But we saw nothing – only a thick blanket of fog. “When you come to Kelimutu,” Dino said, “tell Konde Ratu you want to see them.” He whistled into the wall of white beyond the metal railing, and moments later – as though by magic – the mist lifted just enough to see the married pair: Konde was the colour of dark chocolate, while ravishing Ratu looked teal green over a shared crater wall.

Local people believe that Kelimutu is the eternal abode of spirits. Upon a person’s death, the spirit would meet gatekeeper Konde Ratu before entering a lake, determined by their age and character. For this reason the lakes are named Tiwu Ata Mbupu, ‘Lake of Elders’; Tiwu Nuwa Muri Ko’o Fai, ‘Lake of Young Men and Maidens’; and Tiwu Ata Polo, ‘Enchanted (or Bewitched) Lake’, reserved for those who committed evil deeds in their lifetime.

As we stood on the edge of Tiwu Ata Polo, it soon began to rain. The initial drizzle turned to fat drops, enough for Dino to race down the stairs for the shelter of a nearby pavilion. “We’ll come back tomorrow morning,” he said, and motioned for us to follow. Along the way I stopped and turned my head several times, hoping against hope that the skies would suddenly clear. But the mist showed no signs of dissipating. Eventually we retreated back to the car, and as the rain continued, our guesthouse in Moni.

First light over a painted landscape 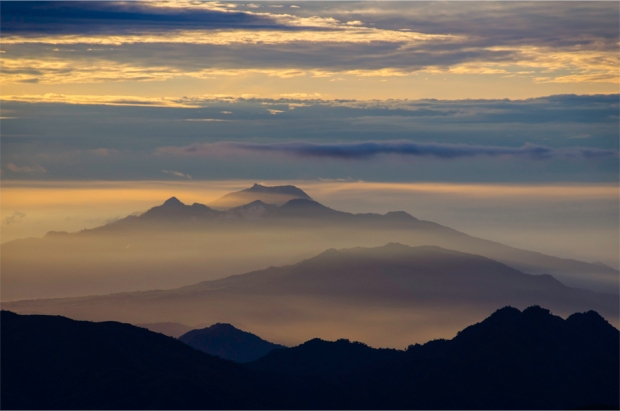 At dinner that night, Bama and I were told the village did not exist some twenty years ago. It had sprung up as a place of lodging for nearby Kelimutu, thanks to its convenient location on the Trans-Flores Highway. But the income earned from tourism is sometimes siphoned off by landlords: Moni is built on land belonging to over 30 local chieftains, and a spokesperson is periodically sent round for “donations” when the chiefs need funds to build a house or materials to perform a ritual ceremony.

We had ordered three plates of mie goreng (fried noodles) between us, and when the conversation slowed our corner table became a vantage point for people-watching. On the restaurant’s far side at least ten Chinese Indonesian women sat around a long table, feasting as their blue ‘executive bus’ waited on the road below. I strained to hear the tones of Mandarin, but these came interspersed with unfamiliar phrases that may have been Hokkien or Teochew.

There were also a few small groups of European travellers, but I forget most of their faces and where they were from. In the middle of the dining area a Dutch family had ordered plates of spaghetti and other Western fare. As dinner arrived the mother loudly proclaimed to their guide, “After having nasi goreng for the past 10 days, I don’t think I could take any more!” I looked at Bama and tried not to cringe. What nasi goreng? I thought. Earlier that day we had been sitting at a bamboo picnic table on Paga Beach, sipping fresh fruit juice and tucking into a delicious nasi campur ikan – a fluffy bed of red and white rice, cabbage and a medallion of locally caught tuna, all brushed with raw chilli sambal.

Long after the Dutch family had retired to their rooms, Dino tapped his cigarette on the ashtray, leaning in and looking us straight in the eye. “When you get to Komodo, the food on the boat will be very good.” He sat up and paused before inhaling another breath of nicotine. “I’m not one of those who will give their clients nasi goreng every day.”

The next morning Dino drove us back up the mountain to see the fabled Kelimutu sunrise. The rain and clouds of the previous night had finally eased, and a rainbow was partially visible over the midnight green waters of the lake of elders.

As the sun rose above the horizon, mist draped the lower slopes of mountain ranges in the east, dominated by the flattened cap of active volcano Gunung Egon. It formed the centrepiece of a painted landscape with multiple ridges that narrowed to a neck of land, the sea on both sides glistening in the light of dawn.

Bama and I marvelled at the raw volcanic landscape spread before us, a stark contrast to the surrounding pine forest and rice fields tumbling down the lower slopes. The perfect reflections on the dark chocolate lake soon turned a deep ruddy brown, with slivers of red and yellow along its edge. At the lake of young men and maidens, the sun’s rays gradually moved down the crater wall, changing its colour from translucent teal to an opaque turquoise. In his school days Bama had longed to see the lakes of Kelimutu, and as we stood taking pictures at the viewpoint, I recognised that this was nothing less than a dream fulfilled. ◊ 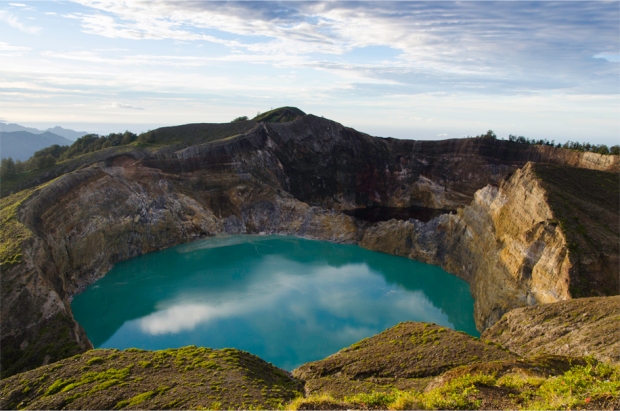 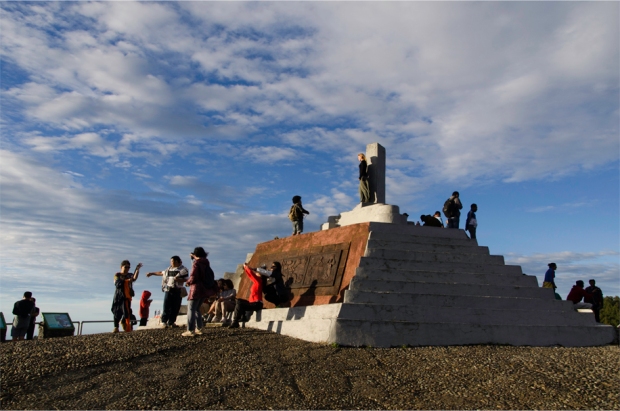 Spectators at the viewpoint 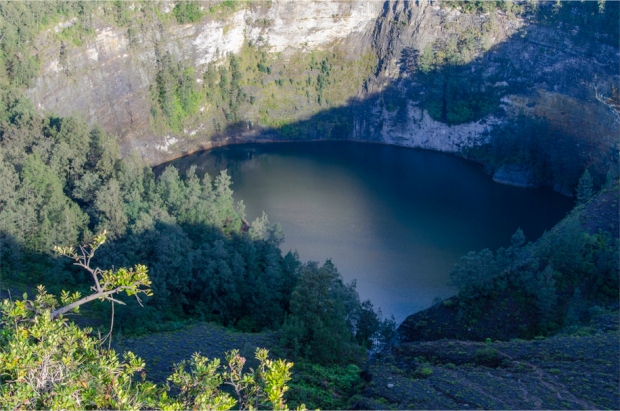 The lonely ‘lake of elders’

Shades of turquoise and dark chocolate

Sacred lakes in an old caldera

Living on the edge 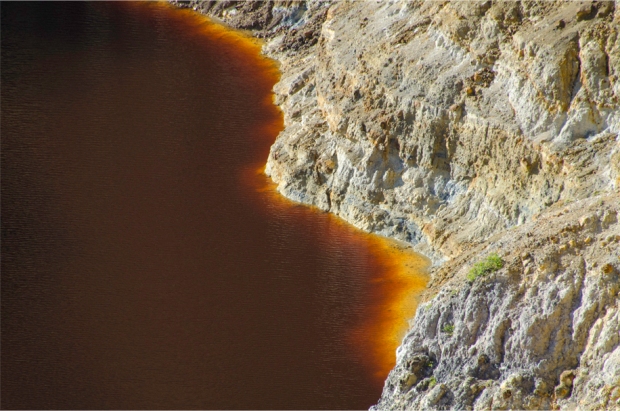