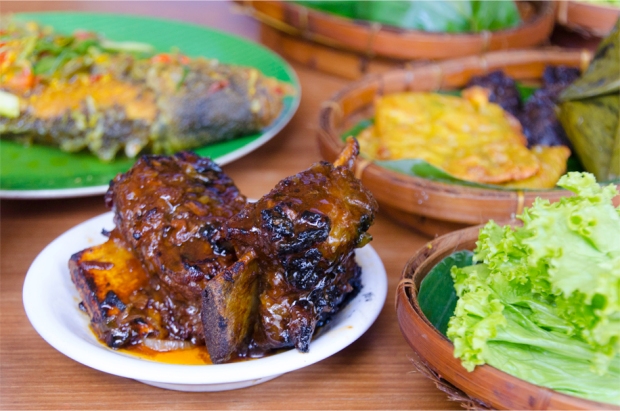 “Congratulations!” Bama smiled, his eyes lighting up as he spoke. “You’re officially Indonesian.”

But there was no revocation of passports, no oath of citizenship to a new country. I had simply confessed my newfound love of ikan asin, a humble assortment of dried fish that crackled with each bite. Served with roasted peanuts, the sweet-savoury combination was so enticing that I truthfully told Bama, “I could just have it with rice.” Through these words I had unknowingly echoed the exact sentiment shared by thousands – if not millions – of diners across his native archipelago.

Indonesia, more than any other country I’ve been to, has irrevocably changed my palate. My travels there in the past two years have taught me to embrace bold, fiery flavours but also the depth and complexity of a spice mix – known as bumbu in casual, everyday terminology.

I have already waxed lyrical about the joys of ayam taliwang in Lombok, but on my latest trip I marvelled at the grilled delight that is ikan bakar rica-rica, a new favourite I now hold in equal regard. It was a large, meaty fish, spiced with shallot, bruised lemongrass, kaffir lime, garlic, ginger, chilli peppers, and most importantly, the potent punch of cabe rawit – bird’s eye chilli. Although the dish hails from Manado in North Sulawesi, I had my first taste at a restaurant just outside Maumere, over a thousand kilometres from its place of origin.

Eating in Flores was about appreciating the rich bounty of the soil: I derived simple pleasure from passionfruit, papaya and banana, blended into one ambrosial smoothie; the intensity of a double espresso made from locally grown coffee beans in Ruteng; the tart flavour of ikan kuah asam, fish stewed with aromatic kemangi (lemon basil) leaves and the acidity of belimbing wuluh; and the sensation of slurping up translucent, silken strands of noodles known as soun kuah bayam.

In the fishing port of Labuan Bajo we sat down with our two guides for a veritable feast on the waterfront, where the air was heavy with fragrant smoke and patrons clamoured around plastic tables in hungry anticipation. We hovered over plates of freshly-caught squid, red snapper and garoupa, all grilled over an open flame and repeatedly brushed with layers of luscious, honey-thick kecap manis: soy sauce imbued with the concentrated sweetness of palm sugar.

All four of us opted to pakai tangan – using our bare hands to tear the flesh from the bone, and picking up vegetable stalks even if they were dressed in chilli and shrimp paste. I learned from Bama’s example, watching attentively as he skillfully scooped up small wads of rice, before casually brushing the food from his palm with a final flick of the thumb. 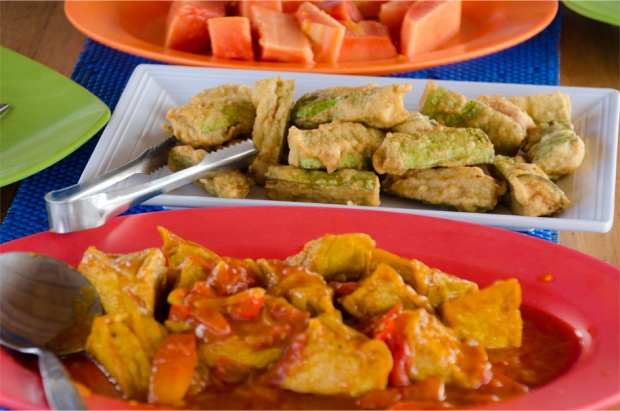 A wider shot of the seafood stall

And how could I forget the indulgent martabak manis we happily devoured after a day trip to Bandung? I would describe it as a stuffed pancake, cooked in a deep pan, slathered in butter and chocolate sprinkles (learned from the Dutch), then liberally drizzled with condensed milk before being folded into a crescent. As the heat causes the chocolate to melt and fuse with the condensed milk, a final layer of butter is applied to the browned surface, and the martabak manis is sliced and boxed for immediate consumption.

Not all our meals were as satisfying however. Last December we dined in Bali at a restaurant overlooking a valley of rice fields and soaring palms – all with a backdrop of Mount Agung, as swollen clouds did a slow dance around the slumbering volcano. The view was impressive, but the food truly mediocre: a 100,000-rupiah buffet with a handful of usual suspects; tired containers of greasy fried noodles, overcooked miniature sate, ketchup – not chilli sambal – and a lacklustre nasi goreng.

Later Bama confided, “I really need to ask Bli Komang not to take us to fancy restaurants.” He then alluded to the small, informal family-owned businesses that are a staple of daily Indonesian life: “We should go somewhere cheap – maybe a warung.”

This time Bli Komang would accept Bama’s request without hesitation. As we tracked north to Singaraja, he grew excited about introducing us to jukut undis, a black bean soup native to the area. We stopped at a tiny warung on the main road running east west along the northern shore, opposite the floral reliefs of a temple, with low stools along a table just long enough for three diners. It was an oddly dramatic but low-key affair. The morning light gave the decorative tablecloth a turquoise sheen, and the warung had the quality of being backstage, with the debris of the production process lying around and a wall that disappeared into the darkness.

There was indeed a small bowl of jukut undis, but the star of the show was nasi campur ikan, white rice with sides of pepes ikan – spiced fish grilled in banana leaf – and a mixture of long bean and shredded coconut, easily the best lawar I had tried in Bali. And it was here, served up in this hearty Indonesian breakfast, that I found the universal appeal of ikan asin. ◊ 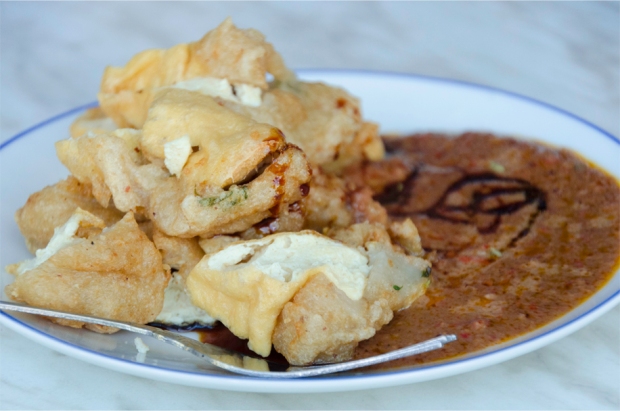 ‘Gerobak’ food carts outside a mosque in South Jakarta