An audience with a Manggarai chief

Sipping on a mug of strong, sweetened local coffee, we sat cross-legged on a mat, across from the village chief as he smiled and folded betel leaves, his dark teeth showing between red-stained gums. Behind him was the tiang tengah, the central pillar marking the spiritual heart of the house, where ceremonial sacrifices to the ancestors were made. Fashioned from a single tree trunk, it was hung with drums, deer antlers, and a gourd for holding tuak, liquor made from the fermented juice of sugar palm.

Bama, Dino and I were guests in the chief’s traditional rumah gendang, the Manggarai ‘drum house’, in the village of Ruteng Pu’u. Around us the walls were proudly adorned with family photos – some taken as they wore traditional costumes inside a church – and a decorative cloth from a grandchild in Australia. At one end a TV beamed the latest programmes from Jakarta, while a shrine to the Virgin Mary stood in the corner, in front of an image of Jesus Christ. I noticed that the front door was painted with small white crosses, a series of blessings from the priest, as Dino told us how animistic beliefs and Catholicism were practiced side-by-side. “Mereka jalan bersama-sama”, he elaborated. They walk together.

Soon the chief turned and fixed his gaze upon me. “It’s good that you speak Bahasa Indonesia,” he said, still folding betel leaves. “Otherwise I would only be able to say hello… I don’t know how to say anything else [in English].” At this, he bowed a little and waved as though greeting a foreigner.

Ruteng Pu’u and its central megalithic altar or tomb 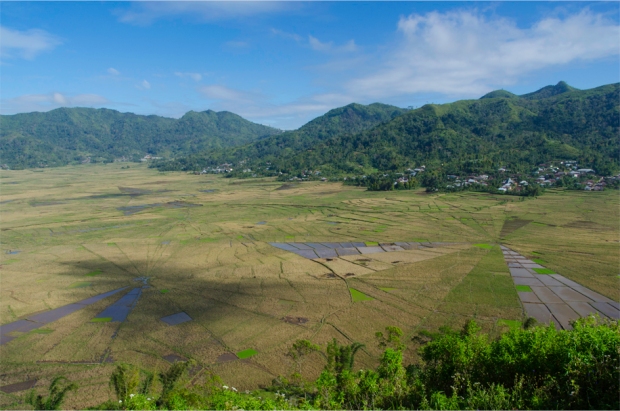 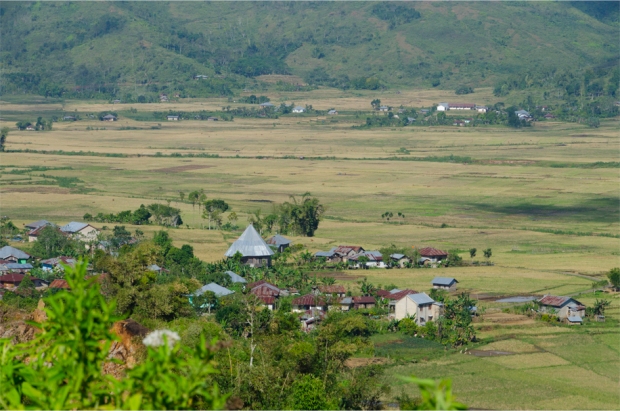 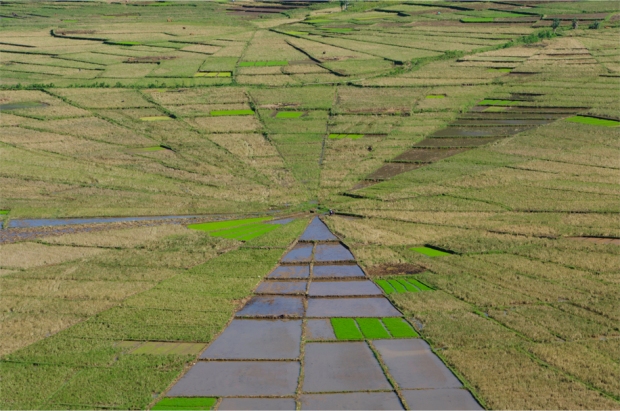 Patterns of the land

Spurred on by Dino, our host took on the role of a storyteller, and I listened attentively, understanding half of his words until Bama stepped in to translate. It became clear that the power of adat – of long-practiced customs and traditions – still held sway in Ruteng Pu’u. The chief said that without a proper ceremony for the ancestors before a festival, food in the storehouse would mysteriously disappear or go rotten, and guests would not turn up.

We learned how the connection to the Manggarai house is cemented at birth, when the umbilical cord is cut and buried in front of the doorway. The strict adherence to adat continues even in death, when the body is buried beneath the megalithic structure at the centre of Ruteng Pu’u. Even if someone died in Jakarta, the chief said, the body was required to return to the village, or the family would face sickness and misfortune.

The next morning we stood on a hilltop in nearby Cancar, overlooking a valley of rice paddies that stretched across the landscape in a series of spider webs. Dino had explained that without visiting the rumah gendang of Ruteng Pu’u, we would not understand the logic behind these curious features known as lingko. Its communal centre, where offerings and sacrifices are made before planting and prior to harvest, mirrored the tiang tengah. Radiating out from the centre were plots belonging to each member of the family – their outlines like the rafters supporting the roof of a Manggarai house. ◊ 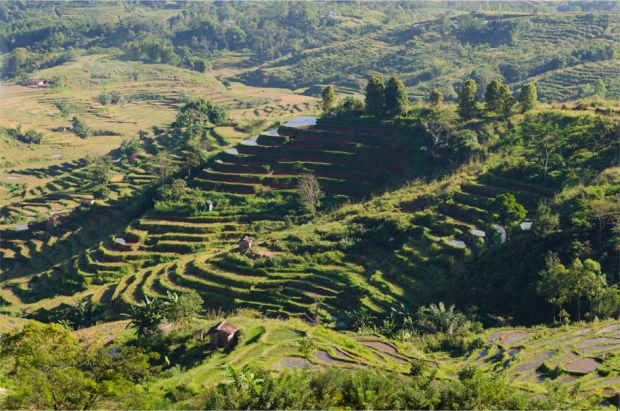