How to read a Balinese temple

The cyclist is frozen mid-pedal, against a luxuriant backdrop of flowers spreading up into the sky. He appears wide-eyed, the traces of a moustache above his lips, and a full head of hair crowned with the folds of a Balinese udeng.

This is Dutch artist W.O.J. Nieuwenkamp, who in 1904 became the first person to ride a bicycle in northern Bali, and the first European artist to visit the fabled island. He extolled Bali as “the loveliest land I know”, bringing back drawings and ethnographic studies of a culture then unknown to a Western audience. In turn, Balinese craftsmen astonished by the sight of a foreigner on a bicycle would immortalise him in stone at the temple of Pura Meduwe Karang.

Nieuwenkamp would return two years later, in time to paint the ruins of Denpasar – today the largest city on Bali – in the aftermath of war. Over a period of six decades, the Dutch had embarked on a series of brutal military campaigns to gain total control over the island. The expedition of 1906, whose effects Nieuwenkamp saw, was the fourth such attempt. 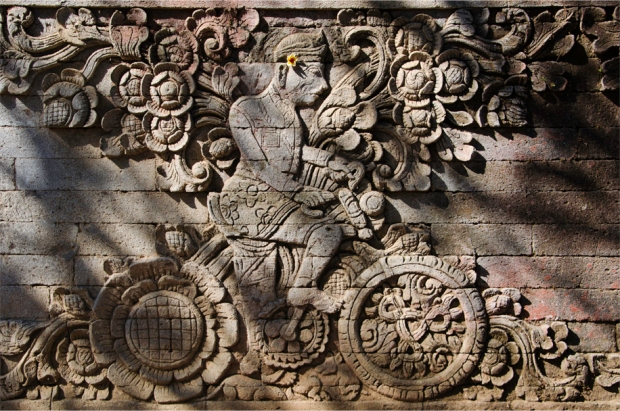 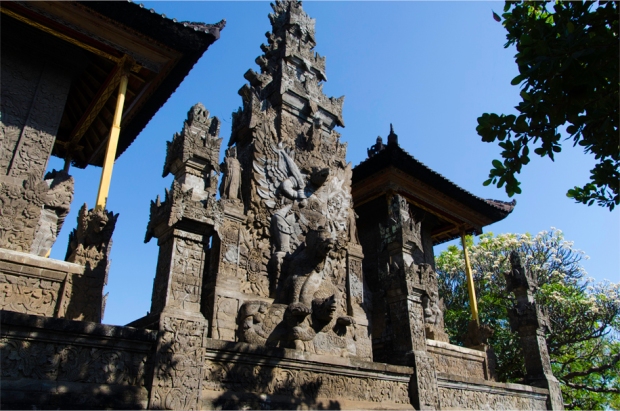 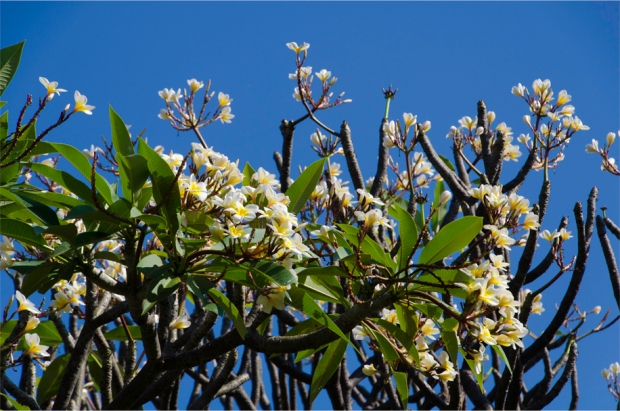 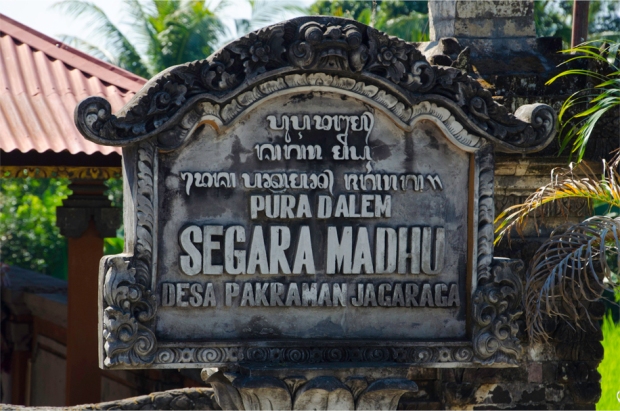 At Jagaraga’s ‘temple of the dead’

In 1849, after being repulsed in two earlier campaigns, the Dutch landed in northern Bali with a fleet of 100 ships, containing no less than 3,000 sailors and 5,000 soldiers. On their march to Singaraja, the Kingdom of Buleleng’s capital, the invading forces would encounter fierce resistance at the village of Jagaraga.

The village was originally known as Sukapura, but as its residents prepared for battle against the Dutch, digging a deep trench and installing booby traps known as poleng, their settlement would acquire the name Jagaraga, which means ‘watch out for yourself’. The local populace also built a fortress called Supit Urang, stretching west to east across the village graveyard. But Jagaraga’s defenders were no match for the weaponry and superior firepower of the Dutch.

At Pura Dalem Jagaraga, the ‘temple of the dead’, unusual reliefs on the outer wall of the compound are a testament to the Dutch invasion of 1849. The temple suffered heavy damage in the battle, and was later rebuilt with a modern touch.

The local craftsmen carved a warship, two biplane fighters swooping down on terrified villagers, a bicycle and two cars, including a Ford Model T flying the Dutch flag, its driver brandishing a pistol. These carvings were interspersed with bucolic scenes, with a man climbing a coconut palm, another man fishing, and children flying traditional kites. Taken together, these glimpses of daily life allude to a tranquil existence before the war.

Another view of the reliefs 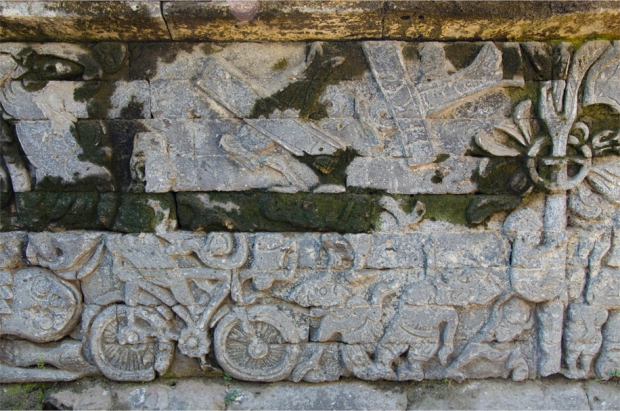 Menacing planes and a soldier on a bike

A pistol, a flag and a Ford Model T

When someone dies, the Balinese return the body to the five elements: the flames and smoke of a ngaben cremation ceremony correspond to fire and air; the ashes, representing earth, are then scattered into the sea, symbolising water. Finally, the spirit of the dead waits at the pura dalem, the funerary temple, where loved ones pray for its passage into heaven, thus completing the process with a final element, sky. We learned this from an elderly gentleman with a perpetual grin and a youthful, mischievous glint in his eyes. Most probably in his seventies, the former schoolteacher now dedicated his life to taking care of the temple.

“Sudah bisa bicara Bahasa Indonesia?” He asked me. Can you already speak Indonesian?

I hesitated. “Sedikit-sedikit.” Only a little.

“I know a bit of Bahasa Inggris,” the gentleman said, “so I can use it and practice with you.”

Those words were a true understatement. With great intensity in his eyes, bubbling enthusiasm and a constant gap-toothed grin, he continued in fluent, melodic English, narrating the history of the temple and the philosophies behind its creation.

The three-temple system of the Balinese village dates back to the days of the Majapahit kingdom, which conquered the island in 1343. Our host explained that villages usually possess a Pura Desa, Pura Dalem and Pura Segara – the village temple, funerary temple, and ocean temple, with each one orientated in a specific manner. The ocean temple, for instance, is always placed in the direction closest to the sea.

“People often ask me how many gods I believe in,” the temple keeper told us. “I always say only one, but with many manifestations.” Balinese Hinduism is centred on a supreme being known as ‘Hyang Widhi’, and the most important manifestations are the three forms known as the Trimurti – Brahma the creator, Siwa the destroyer and Wisnu the preserver. The three temples of each village correspond to the Trimurti, with Pura Desa dedicated to Brahma, Dalem to Siwa, and Segara to Wisnu. 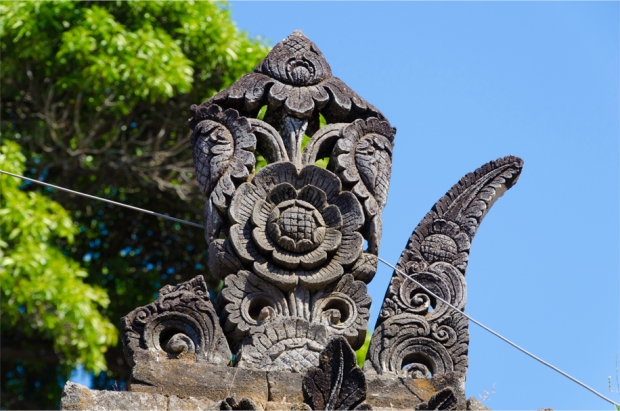 The gentleman also explained the design of the kori agung front gate. To the Balinese Hindu, he said, it symbolises both the macro-universe and micro-universe. At the macro level the kori agung is a mountain, while it represents a face at the micro level. The two side doors are its ears, the middle its mouth, the carvings above the main door its nose and the small sculptures on either side its eyes.

At this point the narration suddenly took a more personal turn.

“I used to do bad things – gambling, getting drunk, being a playboy – but now I’ve stopped. Now I’m a vegetarian.”

The gentleman turned to me and smiled, addressing me as a little brother.

I shook my head.

“When I was younger, I was like you.” He pretended to flex his lean, wiry arms. “Strong… and full of negative energy. But yoga helped to give me balance with positive energy.”

From a small pouch tucked into his belt, the temple keeper unfolded two photocopies and set them down in the shade of a pavilion, under the watchful gaze of a winged lion. Meticulously written by hand, its neat, flowery letters strongly influenced by Balinese script, one was a detailed summary of the temple’s history and its unique features. At the bottom, below a gracious apology made in case the description was boring (it was clearly not), the document was signed KT Suradnya. KT, I later realised, stood for ‘Ketut’.

The second sheet was a series of hand-drawn diagrams illustrating the tenets of Balinese Hinduism. “In Europe the swastika is a bad symbol,” Ketut said, “but here in Bali it is a sign of our belief. It points to the cardinal directions and it represents Nawa Sanga, the nine manifestations of God.” He moved the sheet diagonally as he spoke, attempting to distance it further from the Nazi symbol. “It is always straight, never rotated.”

Ketut flipped the page. Beneath a pyramid showing the seven steps to attain Nirvana, my eyes came to rest on a drawing of two concentric wheels, with the Balinese character ‘Om’ at its centre. It appeared like a mandala, and we understood it as a balance of opposing forces – moon and sun; fire and sea; and intriguingly, wind and justice. Ketut chuckled. “But this is not what it’s like in our country,” he said half-jokingly. “Justice is like the wind.” ◊

The outer courtyard at Pura Beji 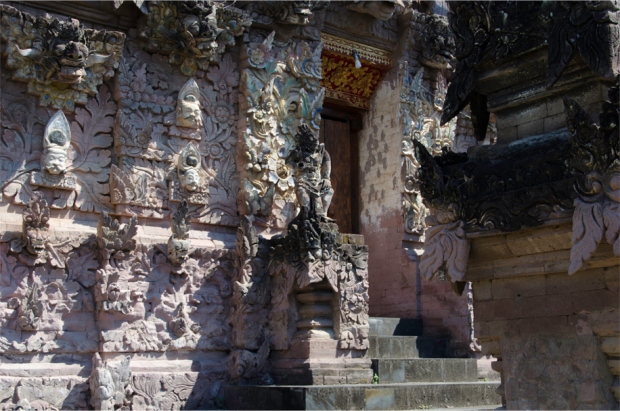 The temple is known for its rich sculptures in pink sandstone

Making music for the lion

A riot of pinnacles 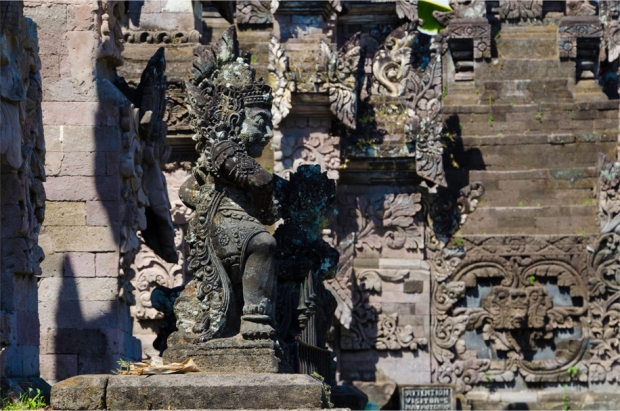