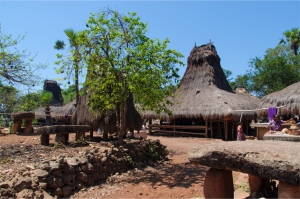 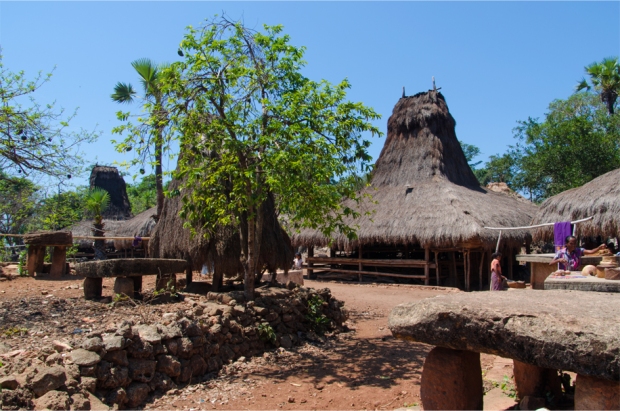 He grips a sword in one hand and a scabbard in the other, swivelling his wrists in a fluid, effortless motion. “First you will practice on a banana tree, then you can cut open a coconut.”

Of all the things I had planned to do at Nihiwatu – hiking, stand-up paddleboarding, perhaps even a cooking class – I never imagined a Sumbanese sword lesson would be on the cards.

It’s seven-thirty when I meet Tinus in the open-air bale (pavilion) of our villa. We stand in view of Occy’s Left, the wave that put Nihiwatu on the surfing map, as the morning sun glances off the sea spray up and down the coastline. Unsheathing his sword, Tinus remarks that the parang Sumba he carries as part of his uniform is more decorative, with a blade too thick for fighting.

“My father was a sword master,” he says candidly. “He made the best swords on Sumba.” Tinus proudly tells me he was also an accomplished fighter; such was his prowess that his mere presence on the battlefield was enough to make opponents flee. As a father, he was eager to impart his knowledge of warrior ways to his children. Tinus recalls childhood training sessions in a ring of banana trees, practicing until his fingers were painful and every single tree had been cut down. By the age of 12 he was already taking part in island-wide competitions.

Travellers’ accounts of Sumba mention war and ritualised violence as a central part of its cultural identity; the practice of headhunting only stopped in the 1920s, and the ‘skull trees’ (andung) that once took pride of place in the centre of hilltop villages – a literal headcount of slain enemies – remain a prominent motif in Sumbanese sculpture and ikat weaving.

Then there is Pasola, an emblematic festival held each year in February or March. Heralded by the arrival of sacred sea worms (nyale) that wash up on the island’s beaches, it involves a raucous gathering of horsemen from rival clans, hurling spears and spilling blood to fertilise the earth for a good harvest. Sometimes Pasola ends like a riot, with the throng of agitated spectators throwing punches and a hail of stones.

Our first glimpse of the fabled parang Sumba came on the drive from Tambolaka airport, when we saw local men with their machetes strapped to the waist by an ikat sash. The staff uniforms at Nihiwatu were no different; Tinus carried his own sword with a quiet self-assurance and the bearing of a soldier. Over the next four days he would be our Mori Uma – at turns a butler, personal concierge and hiking guide. Whenever he escorted us on the grounds, fellow staff members openly praised his swashbuckling skills.

After dinner the first night, as we ambled down a pathway marked in sand, I half-jokingly asked Tinus if he could teach me to use a sword. At this point my three companions – Cyndi, Coco and Rik – had already settled on a yoga session the next morning. “It’s funny,” Coco teased, “We’re doing something so Zen and you’re doing something so violent.”

Back in the bale, the first thing I learn is defence – blocking with a scabbard made from the bark of a jackfruit tree. Tinus uses swift movements of his hand and arm to simulate the opponent’s thrusts. I end up missing the first five or six tries; when I eventually find my rhythm, I make the foolhardy suggestion for Tinus to take up his sword. It is tempting to imagine the two of us – master and student – sparring beneath the alang-alang roof to the sound of the waves. But Tinus stops and traces a finger across my forearm. “[It’s] dangerous,” he says, “you’ll be cut.” 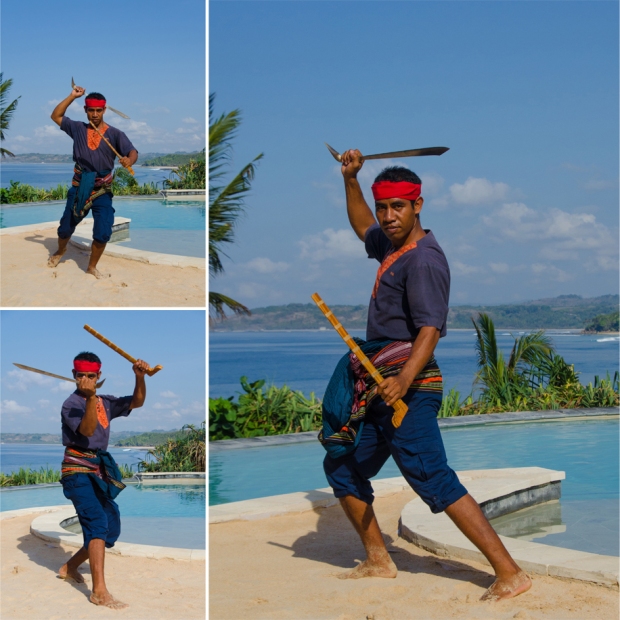 Sumbanese sword-fighting, it turns out, is a balance of hard and soft: one wrist must be pliable and primed for attack, and the other wrist locked to counter the force of an opponent’s strike. While Tinus demonstrates a few basic steps, I study the intensity of his gaze, the restraint and control of his hands, and his intuitive footwork. “Harus satu nyawa”, he says. You must become one [with the sword].

Gripping the curved hilt feels oddly familiar. My left hand fits snugly over the handle, which has smoothly rounded grooves for fingers, and the sword is neither feather-light nor iron-heavy. Meanwhile, Tinus coaches me on attaining the ideal mental state for a fighter. “Don’t lose your thinking”, he says, “You have to focus… once your mind goes, mati cepat” – you will quickly die. “Don’t think of your wife, your family.”

Soon I learn that Tinus is not just a gifted swordsman but also a natural storyteller. Throughout our sessions he seamlessly weaves in anecdotes of the life he left behind, in a mystical world governed by the ancestral religion known as Marapu.

Tinus speaks of reading oracles from chicken hearts and secret objects stored inside traditional houses, whose steeply pitched roofs were constructed to bring the Sumbanese closer to the gods. I ask him about the two figures perched on either end of the roof ridge; he tells me they represent men and women, guardian symbols to ward off evil spirits believed to steal souls at night. “That’s why there are so many crazy people on this island,” he laughs.

I also learn that Tinus hails from a noble family. His grandfather was a ratu – which he explains as the “king of the village”. Even today, Ratus hold great authority and spiritual power as priests in Sumbanese society.

Tinus says that although he was chosen to be next in line, he pursued an education against his grandfather’s wishes. He recounts the stark warning he received as a boy: “If you go to school, I will get sick and die!” But his desire to move up in the world proved stronger than the demands of tradition. Tragically, his grandfather’s prophecy came true. “They took me out of school and I went back,” he says matter-of-factly, “But it was too late.”

Over the course of my sword-fighting lessons, these stories become increasingly personal but no less mysterious. “I have indra keenam,” Tinus says. He looks at me expectantly for the English equivalent. “Oh!” I think aloud, “A sixth sense.”

Tinus speaks of his ability to “see” in his sleep, with ears so sensitive he can differentiate between people and animals passing outside in the darkness. He puts much of this down to training from his father. “His name was Lukas,” he fondly remembers.

Though he did not understand it at the time, Tinus now knows that his father was trying to safeguard his children from harm. For the threat was very real – Lukas was not just a prominent fighter but also a hired assassin. Soon I am struck by the direct way in which Tinus recounts his father’s death. He attributes it to black magic and poison from jealous rivals, but it is clear that he is not one to take revenge. “That was my father’s generation,” he says. “I chose my own way.” 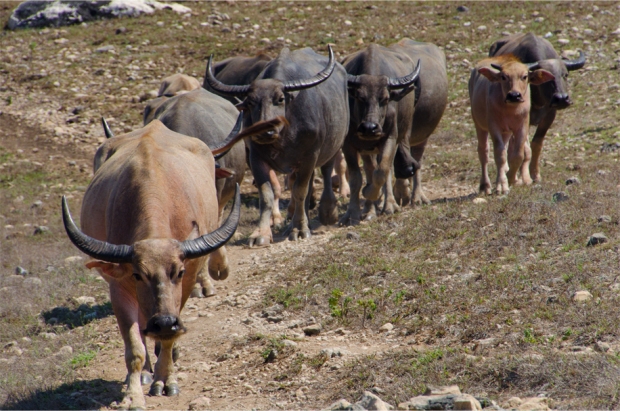 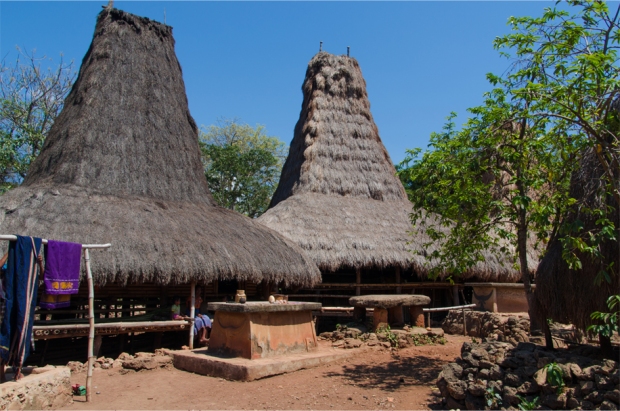 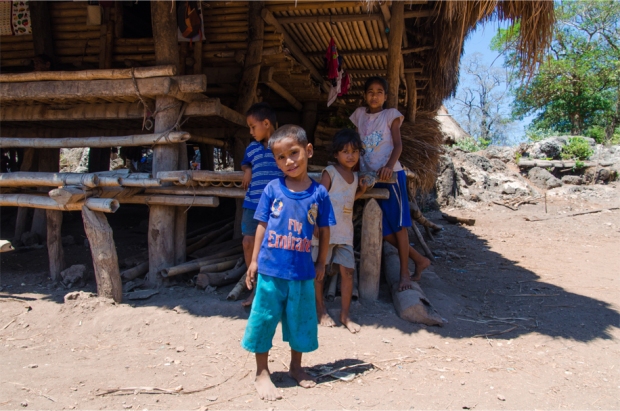 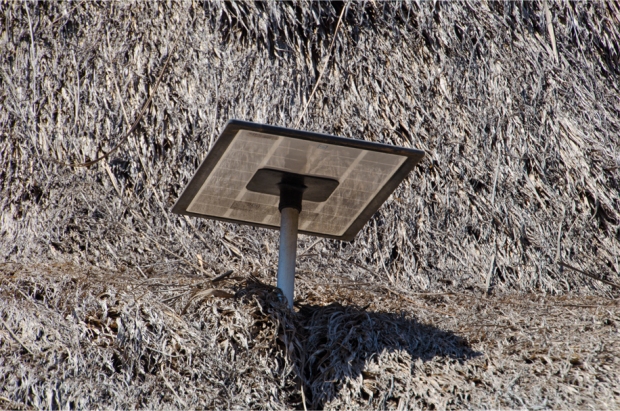 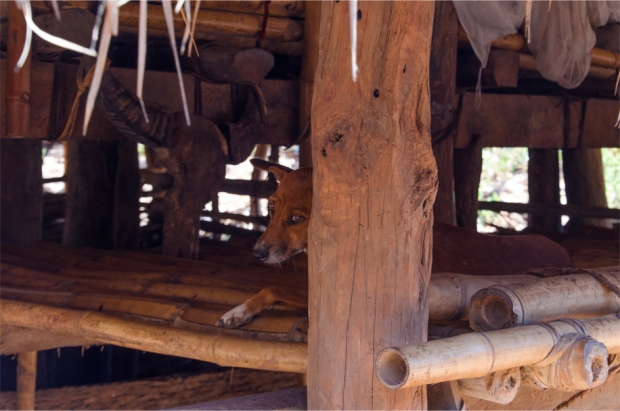 The trail to Nihi Oka meanders through a barren, stony landscape of pastures and blackened rice fields awaiting the rain. A herd of water buffalo passes by, their hooves kicking up small clouds of dust, and half an hour later we find ourselves clambering through a narrow passage of rock.

At its end lies a small village where dirt-faced children stare at us with wide eyes. I feel as though we have returned to a lost age – a series of tombs stand on raised platforms in the centre, while ikat textiles lie drying in the sun as dogs and pigs run freely around the thatched houses. The contrast with Tinus’ uniform could not be more striking: he is dressed like a smart swashbuckler, wearing a narrow-brimmed straw hat, white polo shirt, rolled-up navy blue trousers and a brand new pair of sports shoes. This time his sword is slung casually over the shoulder.

As we walk toward the beach at Nihi Oka, sweating under the late morning sun, Tinus describes the process of building a home on a small plot near Nihiwatu. “Every day I worked from six to two, then built the house,” he says. “It took three months.” We pass it several times on our daily excursions: the walls of bamboo matting are cheerily painted in lime green and yellow, with two portraits of Jesus above the door and a profusion of potted plants on the front porch.

Tinus does not tell me how he started out at the resort, but says he picked up English by practicing with guests. I find that his language is sometimes interspersed with colloquialisms learned from surfers, not least the phrase: “He the man!”

Given his talent and reputation, that would not be a bad description for Tinus himself. At Nihi Oka, where breakfast is served in a tree house suspended above the beach, we dine with an Australian journalist and James McBride, who manages the resort and oversees its expansion. “Tinus is one of the best,” McBride tells us. “He’s the most rugged man we have.” Others say he is one half of Nihiwatu’s power couple; the other half is Dorkas, who heads the food and beverage department. We are told she is the island’s number one bride. 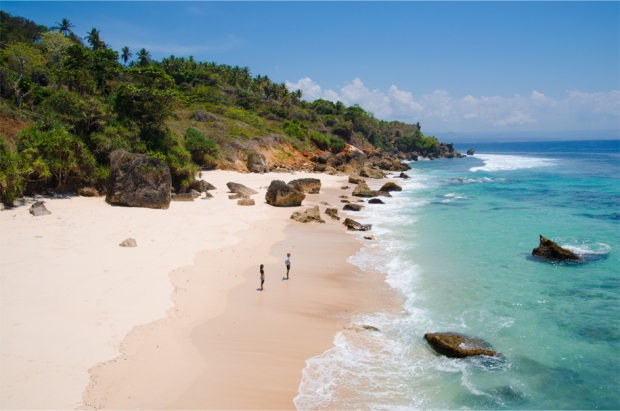 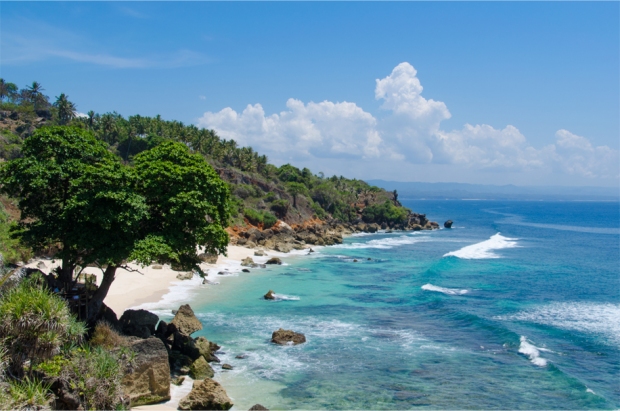 Traditional Sumbanese marriages demand a payment from the groom in water buffalo; each one costs 25,000,000 rupiah (roughly US$2,000), a hefty sum by any Indonesian standard. Four would have been enough to build a sturdy house in concrete. When I ask Tinus about his own experience, he is nonchalant. Dorkas’ family required 28 water buffalo, and several years on, he is still paying off the bride price. “I buy two a year,” he says.

The next morning, as we talk midway through a sword-fighting session, a lingering question that first emerged at Nihi Oka reappears in my head. I was certain that oka meant ‘beach’, but unsure about the exact definition of nihi.

The name is prosaic but fitting; raw and earthy like Sumba itself. I learn that ‘Nihiwatu’ describes a natural formation gouged into a sacred rock on the beach. Local people leave offerings of dried tobacco leaves and betel nut, for they believe the amount of wind-blown sand held within it is a prediction of the coming harvest.

At the end of the lesson, Tinus takes me to see the sacred rock. It is a lonely monolith pockmarked by the wind and salty sea air. The billowing crown resembles a cloud, and where the rock faces the Indian Ocean it narrows like the bow of a ship. We stand on a neighbouring stone, peering over the edge, as Tinus places a hand several inches above the surface. “It used to be higher,” he says, “but now, [it is] broken.”

Much later, when we return to the open-air bale, there is mention of a drum whose head was made from human skin. Tinus remembers it well from his childhood – he tells me the beat was so powerful it even shook the earth. But like the sacred rock on the beach, it too is “already broken”, and the drumhead has since been replaced with animal hide. I listen, enraptured, as previous guests would no doubt have done before me. Eventually Tinus raises his arms in the air, a signal that we are out of time. “Many more stories,” he grins. “Many more stories.” ◊ 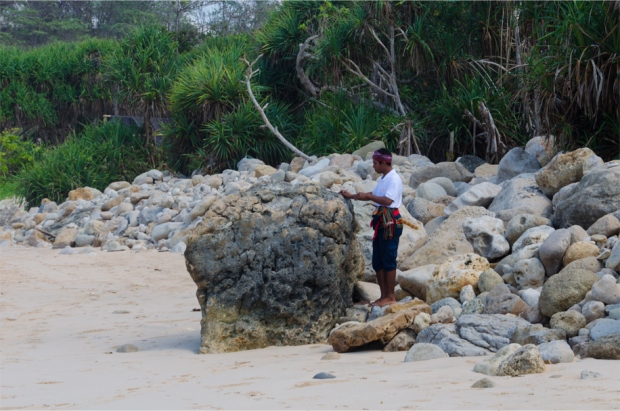 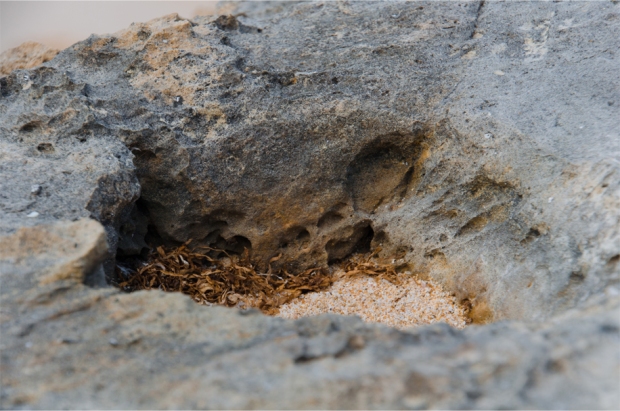 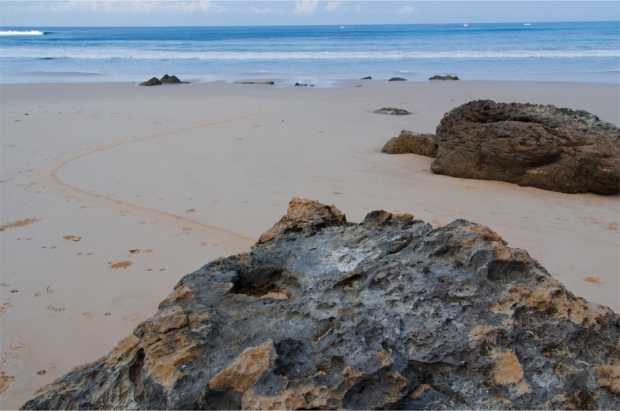 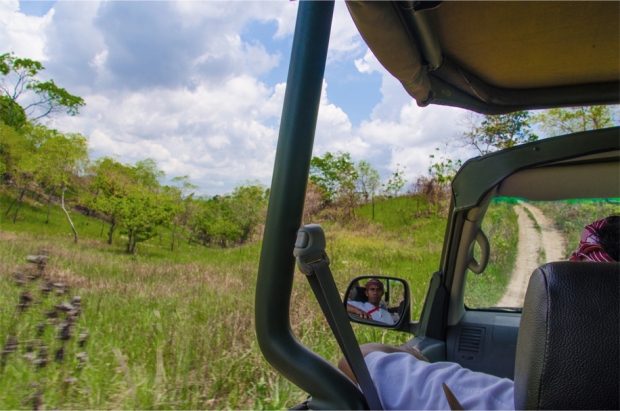 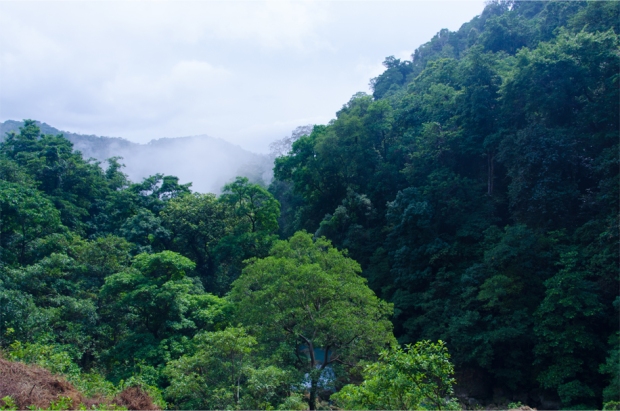 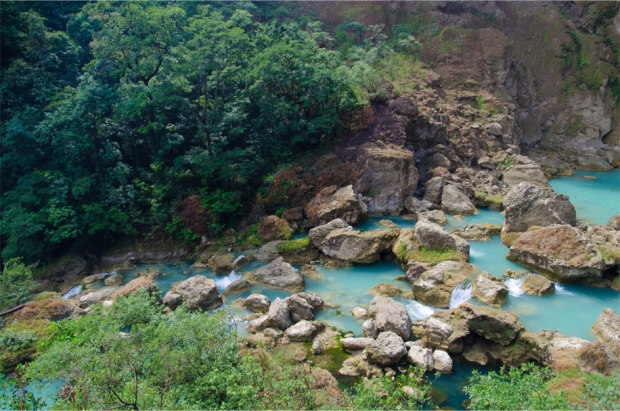 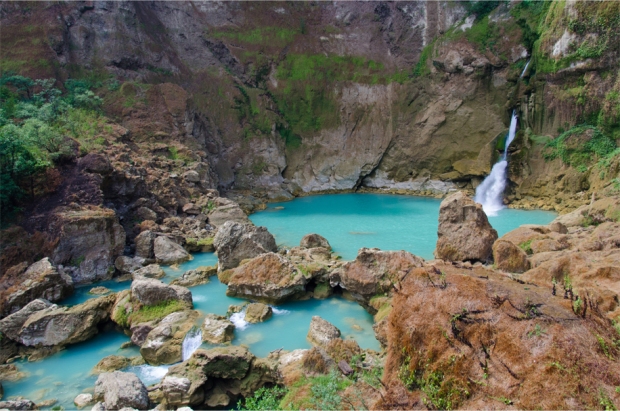 Tags: Indonesia, Nihiwatu, Sumba, Travel
From: Indonesia
← Nihiwatu: on the edge of dreams
2014: a year in review →
31 Comments Post a comment