Olga is delighted when she learns I was recently in Goa. “I’m from Mumbai,” she says, “but a Goan Catholic.” I meet her by chance at a Hong Kong restaurant, and before it gets too busy with patrons, I declare my adoration for the food of her home state. There are two things I regret not doing in Panjim, Goa’s laid-back state capital: the first is that I didn’t stay longer, and the second, that I never joined a Goan cooking class.

But here I am, getting a primer on my favourite Goan dish, xacuti, in my hometown. “It uses fried coconut,” Olga says. “I sometimes make xacuti at home, but it isn’t the same. It tastes different in Goa because they take coconuts fresh from the tree and shred the meat.” With those words, I instantly recall the slivers of grated coconut that gave a crunch to the smoky richness of xacuti. Olga tells me the dish is spiced with cinnamon and cloves, and I begin to realise why it reminded me so much of Indonesian cooking.

When I think of Goan cuisine, my mind drifts back to Fontainhas, Panjim’s old Latin quarter. William Dalrymple, that prolific writer on Indian history, calls it a “small chunk of Portugal washed up on the shores of the Indian Ocean”. It’s not hard to see why. Fontainhas’ colonial houses are painted the colours of tangerine, guava and pomegranate. This sleepy neighbourhood is buffered from the commercial core of Panjim by a verdant hillock, and the 21st-century visitor will find it dotted with heritage guesthouses.

The balconied Hospedaria Abrigo de Botelho commands one section of Rua de Natal, ‘Christmas Street’. More than 150 years old, the house has been lovingly restored, its multi-paned doors and windows framed by spotless white on a sky blue background. What was intended as a family home has been turned into an intimate B&B, and Bama and I meet the jovial Goan owner, Roy Botelho, soon after checking in. With a name like that, I’m curious to know if he speaks Portuguese. “It’s the language I use at home,” Roy tells us. “I speak it with my parents.” 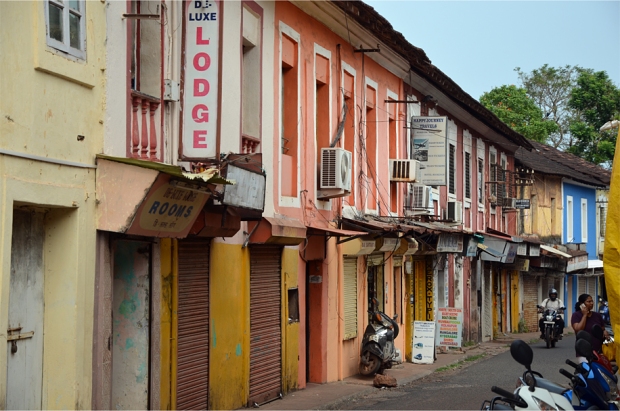 A commercial street in Panjim 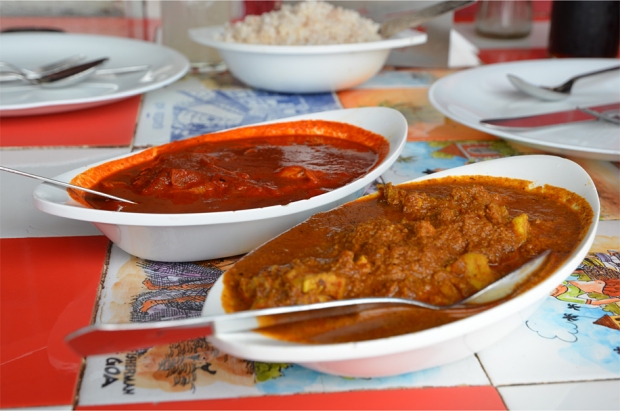 The Portuguese have been gone for more than half a century – expelled when India annexed the last of their South Asian territories – but a certain nostalgia for that era persists among older Goans. More broadly, the concerns of a modern-day Goan mirror those of my native Hong Kong. Wealthy outside investors have pushed housing prices beyond the reach of most residents, a slew of expensive shops cater to tourists instead of locals, and with the influx of arrivals from other Indian states, Goans fear an erosion of their hybrid, east-meets-west culture. Roy tells us the carnival celebrated in today’s Goa is incomparable to the unorchestrated madness he remembers from his youth.

But some things remain. For a taste of genuine Goan cuisine, we are directed to Viva Panjim, an intimate restaurant in Fontainhas where the recipes have been passed down from the proprietor’s own grandmother. I’m surprised to find out that fiery vindalho, which originated in Goa, is usually eaten with pork (we opt for fish). With its telltale notes of vinegar and a complex heat that builds over time, the original vindalho is a far cry from the Anglo-Indian version that has been popularised around the world.

If vindalho is the attention-grabbing star of the show, then shrimp and okra caldinha is a mellow, unassuming figure in the background. A comforting blend of coconut milk, turmeric and other spices, caldinha strikes me because of its familiarity – it is almost identical to the ‘Portuguese sauce’ found in Hong Kong and Macau.

But xacuti is an even bigger revelation. Bama and I had ordered it on our first night in Panjim, when we went for dinner at a no-frills restaurant called George. The place fronted the tree-lined boulevard below Immaculate Conception Church, which rose above a crisscrossing stairway crowned by a statue of the Virgin Mary. In the relative darkness of the restaurant, our first xacuti looked underwhelming – chunks of meat smothered in a lumpy brown sauce. But one spoonful convinced us otherwise, as an unexpected riot of textures and flavours tickled our palates. The xacuti at Viva Panjim would prove even better.

Back at Roy’s Hospedaria, we learn that xacuti is typically cooked with beef or chicken, and its complexity comes from a blend of 14 different spices. Later research reveals just how elaborate it truly is – the dish requires not one masala (spice paste), but three; one for marinating the meat, and two others for the actual cooking. Meeting Olga, I’m reminded that it is the one recipe I should have taken home from Panjim. ◊

The Old Secretariat, once used as Goa’s State Assembly in Portuguese times

A colonial gem in the heart of Panjim 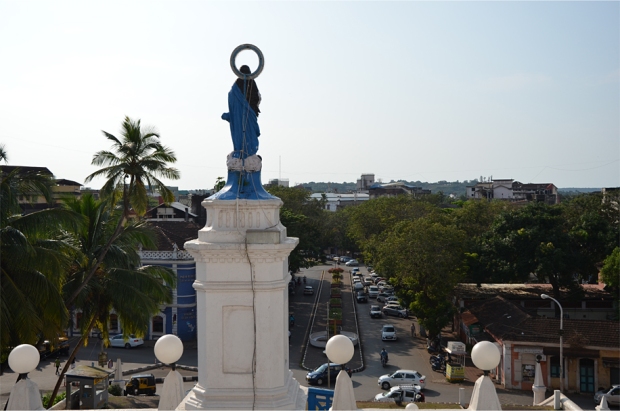 From her pedestal, the Virgin Mary looks out over the city

On the top tier of the stairway outside Immaculate Conception Church 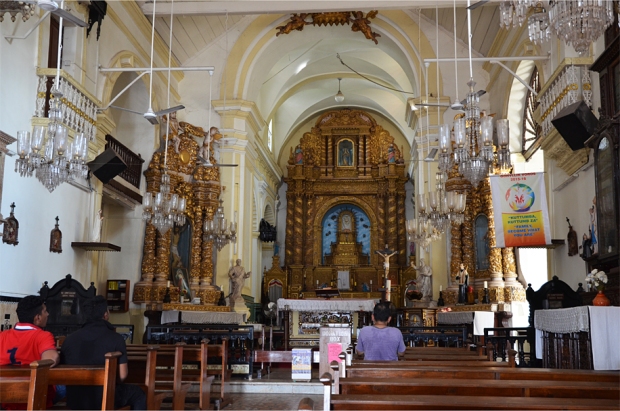