When I was nine years old, a family friend gifted me with a branch of plastic cherry blossoms. I tied it to a pin board above my bed, wrote a haiku about Kyoto in the spring (though I’d never been at the time), then drew a pagoda and cherry trees beside the poem. It was an obsession fueled by lunch breaks spent in the school library, where I returned time and again to a thick hardcover book on the Japanese city. Looking through its vivid descriptions and full-page photographs, I imagined what it would be like to walk in the rain outside Sanmon, the monumental temple gate of Chion-in, and admire the Golden Pavilion across the still waters of its reflective pond. I loved Kyoto long before I set foot on its streets, or rather, I loved the idea of going there.

Then I had the great fortune of visiting not once, but twice. The first time was on a hectic whistle-stop bus tour between Osaka and Tokyo. Even at that tender age, I was bewildered by the fact that our tour group only ate at Chinese restaurants throughout the trip. Japanese diners, sushi joints, and izakaya bars are a dime a dozen in Hong Kong, though it may not have been the case while I was growing up. In Kyoto, my mother and I asked our Cantonese tour guide why Nijo Castle, with its chirping “nightingale floors” designed to warn of palace intruders, was not on the itinerary. “Because every Japanese castle is the same,” he flatly replied.

A few years later, we embarked on a three-generation family trip during cherry blossom season. There were so many of us – including my mother’s five siblings and their respective families – that we even had to book our own coach. I distinctly remember having group pictures taken at the Golden Pavilion (still a remarkable sight under cloudy skies), bounding across the stepping stones in a garden pond at Heian Shrine, and marveling at the bursts of cherry blossom lining the Philosopher’s Walk. Equally memorable was our lunch at a traditional vegetarian restaurant specializing in tofu, which only sated my pescetarian mother. The rest of us, desiring a little more sustenance, eventually did the unthinkable – we stopped the tour bus outside a McDonald’s for burgers and fries. It’s a story my grandparents still laugh about. 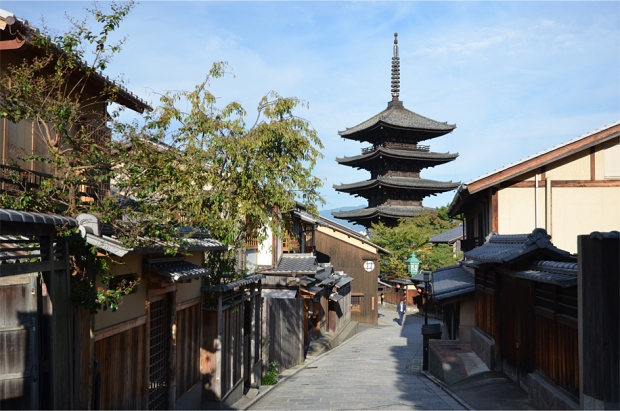 Early morning in the vicinity of Yasaka Pagoda

Yasaka Pagoda by night; the streets of Higashiyama 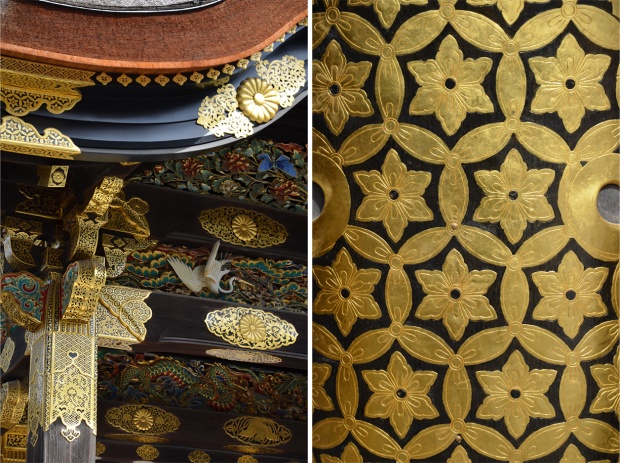 Zenkyoan, a Buddhist temple around the corner from our hotel

Enjoying lunch on the terrace of Sagan, a Higashiyama café

It could be said that eating McDonald’s in Kyoto is especially jarring because it is the antithesis of what the city represents to so many travelers. Its name alone conjures up a vision of classical Japan: vermilion Shinto shrines and magnificent Buddhist temples; sublime gardens of raked sand, moss, and strategically placed rocks; an immaculately dressed (and coiffed) geisha holding an exquisite oil-paper umbrella. In other words, Kyoto implies beauty, refinement, and a heightened level of sophistication. Given its history as the seat of the Japanese imperial court for more than a thousand years (until the emperor relocated to Tokyo in 1869), perhaps that shouldn’t come as a surprise.

The eventual departure of both crown and government spelled an end to Kyoto’s dominance on the national stage, though the new capital would suffer from greater problems of its own. Tokyo was destroyed twice in the first half of the 20th century – first by a catastrophic earthquake and ensuing firestorm in 1923, then the bombing raids of World War II. Kyoto, on the other hand, became the only major city in Japan that was largely spared from Allied bombardment. But in the summer of 1945, the threat of another calamity loomed on the horizon.

The story goes that Kyoto was earmarked as a top potential target for the atomic bomb – until U.S. Secretary of War Henry L. Stimson took notice. When the military disobeyed his order to take it off the list, he successfully lobbied President Truman to do so, just two weeks before “Little Boy” was dropped on Hiroshima. Stimson argued that Kyoto’s cultural significance was so great that its wholesale destruction would never be forgiven by the Japanese. Behind this reasoning lay a deep personal connection: Kyoto was a city Stimson loved, and the setting of his honeymoon several decades before.

But the postwar boom has wiped away much of what Stimson saved from a fiery end. The traditional wooden townhouses called machiya, long a defining feature of the cityscape, have become increasingly rare. Modern-day visitors might bemoan the fact that, upon leaving the monolithic, 15-story train station, Kyoto resembles any other Japanese city – a sprawl of concrete boxes, drab apartment buildings, kitschy, flourescent-lit pachinko (pinball) parlors, and nondescript houses on narrow lots. 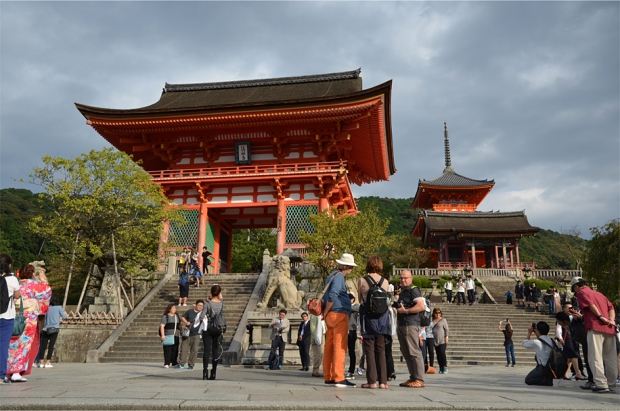 Late afternoon at the gates of Kiyomizu-dera

Looking out over Ginkaku-ji (Temple of the Silver Pavilion) 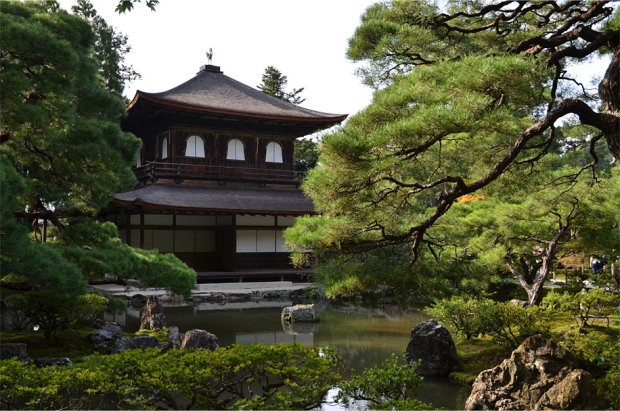 Unlike its gold-leafed counterpart across town, Ginkaku-ji was never clad in silver

Still, for all the modernity that is 21st-century Kyoto, glimpses of its illustrious past remain dotted around the city. Wandering the eastern district of Higashiyama by night, you might glance down a narrow street to find the floodlit Yasaka Pagoda, a lone sentinel that has weathered the elements since the 1400s.

Long before our trip last October, I knew that Bama would never be bored in Kyoto; so great is his love for ancient architecture that it is impossible for him to be “templed out” even after several weeks of exploration. We spent most of our days hopping between various temples and shrines, many of them places I’d last visited as a 14-year-old. Ever the early riser, Bama dragged me out of bed at half past five so we could get to the major sights first thing in the morning, before the crowds could descend and ruin our photographs. “But I thought we were on holiday,” I lamented.

Needless to say, those efforts paid off. The great hillside temple of Kiyomizu-dera, easily one of the most popular attractions in town, was almost deserted when we arrived a quarter after seven. Bama and I reached the gates of Kinkaku-ji – the Temple of the Golden Pavilion – 20 minutes before opening time, joining a small number of fellow overseas visitors and a growing legion of Japanese schoolchildren.

When we weren’t taking hundreds of photos or getting around by local buses and trains, Bama and I found time to relax in the comfort of our cozy hotel room. I chose a place in Higashiyama partially because I’d remembered the wooden townhouses lining the approach to Kiyomizu-dera; the other reason was its proximity to a slew of important temples and shrines.

Heian Shrine, originally built in 1895 to celebrate 1,100 years since the founding of Kyoto 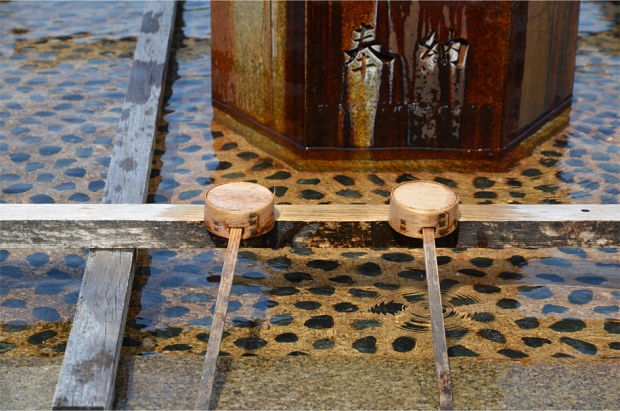 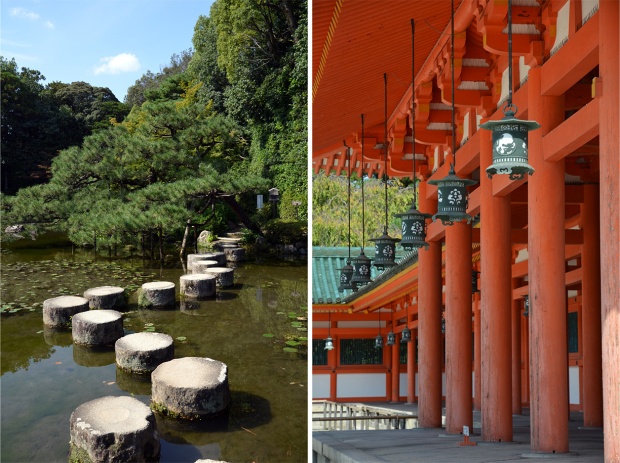 A sanctuary from the hustle and bustle of modern Kyoto

Our lodgings had the outward appearance of a tiny, traditional hotel, though it was anything but. After keying in an access code sent to us by email, we checked in via one of two iPads attached to the unmanned reception desk. But the lack of human interaction was more than made up for by the conveniences found within: our room had a kitchenette equipped with a fridge, microwave, and a large sink; a state-of-the-art washing machine and dryer (with tablets included); and, in lieu of a space-hogging sofa, soft cushions placed around a low table facing the flat-screen TV. Tatami mats and shoji screens lent the space a traditional feel, while the glass sliding doors in the living area opened onto a small pebbled courtyard.

As the hotel was ­in a low-key residential area, we often frequented a Japanese convenience store some 10-15 minutes away to stock up on food, cold drinks, and bottled water. FamilyMart became our primary source of breakfast and dinner, not least because it sold the best microwave meals that have ever passed our lips. Bama and I both loved the restaurant-quality beef curry udon, not to mention the indulgent spaghetti in tomato and cream sauce, served with uni (sea urchin) for an unmistakably Japanese flair.

It wasn’t until our penultimate night in Kyoto that we discovered Sagan, a neighborhood coffee shop just two blocks from the hotel. Housed within a tastefully modernized machiya, its airy, restrained interiors of exposed concrete and whitewashed walls looked straight out of Monocle. Behind the counter, a lone staff member was baking bread in an industrial-sized oven, while the handwritten menu offered Japanese breakfasts and Kyoto home-style cuisine known as obanzai, a humble counterpoint to imperial kaiseki multi-course meals, which were wildly out of our budget.

One Kyoto specialty we did splurge on was traditional pressed sushi at Izuu, a small, 200-year-old upscale restaurant in the entertainment district of Gion. The star dish was sabazushi – hearty rolls of lightly cured mackerel and sushi rice, wrapped in a thick layer of pickled kombu (an edible kelp that is eaten separately). We also opted for tai-zushi (sea bream sushi), and together, the two plates came with a hefty price tag of roughly 5500 yen (US$48). Suddenly our regular microwave dinners seemed completely justified.

Of course, there was another culinary adventure that proved far more affordable. Crossing the Kamo River on our last day in the city, Bama and I spent a good hour perusing the stalls and grazing on snacks at Nishiki Market. I could see why it was nicknamed “Kyoto’s Kitchen”; on display was a tantalizing assortment of foodstuffs, with everything from green tea products and preserved vegetables to fresh seafood. We indulged ourselves with tender, sweet-tasting smoked scallop; skewers of the most succulent salmon and tuna sashimi from the fishmonger; marinated baby octopus stuffed with quail egg; grilled unagi (freshwater eel) livers basted in a wonderfully rich and thick soy sauce; and the fluffiest soy milk donuts, served straight out of the fryer. It was a far cry from the vegetarian restaurant I’d once visited all those years ago, and a slice of the Kyoto I never knew as an impressionable teenager. ◊ 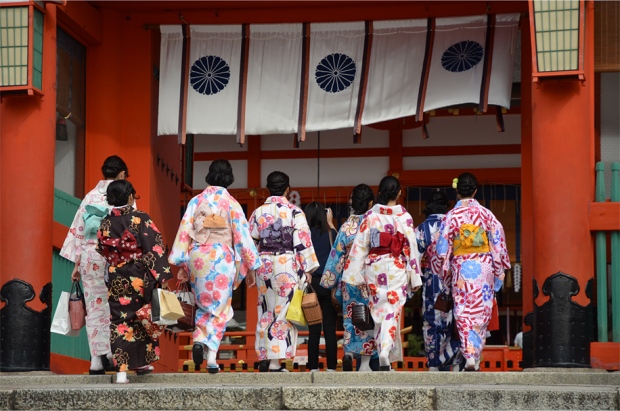 Endless orange torii, as seen in the movie “Memoirs of a Geisha”

Business as usual in “Kyoto’s Kitchen”

Moss growing on a tree in Higashiyama; a Kyoto icon

Kinkaku-ji, the Temple of the Golden Pavilion, on a perfect afternoon