Hoi An: a bridge between cultures

Standing on a pedestrian walkway by the Thu Bon River, Bama and I drink in the view of a sublime architectural gem. It rests on a succession of stone piers, the timber frame bearing traces of maroon paint, faded and stripped away by years of exposure to the elements. Above the rafters, delicate blue-and-white porcelain bowls are set into the edges of the tiled roof, itself crowned by florid, dragon-like finials. It was this famous structure – the Japanese covered bridge – that had brought us to the central Vietnamese town of Hoi An. When I read last August that the 400-year-old landmark would eventually be dismantled for restoration, I knew it was high time to go.

The name Hoi An means “Peaceful Meeting Place”, and it’s entirely fitting that the town’s symbol also represents long-lost connections forged with distant lands. What started out as a harbor of the Hindu-Buddhist Champa Empire eventually blossomed into a thriving mart of trade under the Nguyen lords. Portuguese carracks called in as early as 1535, followed by the Spanish and the French. Known to European merchants as Faifo, the town flourished as an important regional port dealing in silk and ceramics.

Japanese traders also established a settlement of some 60 houses in Hoi An, and along with it, a bridge over a small canal to link their enclave to the Chinese merchant communities. Some believe the bridge was not built merely for practical reasons – apart from aiding transport and providing shelter, it might have also been intended as a gesture of peace. Curiously, the entrances at either end are guarded by a pair of statues not dissimilar from the temple sculptures I’d seen in Japan: dogs in the east and monkeys in the west. These are said to correspond to the Chinese zodiac, for the bridge was started in 1593, during the Year of the Monkey, and finished in 1595, under the Year of the Dog.

Outside the Chinese All-Community Assembly Hall, founded in 1773

Early morning in Hoi An, before the streets are closed to traffic 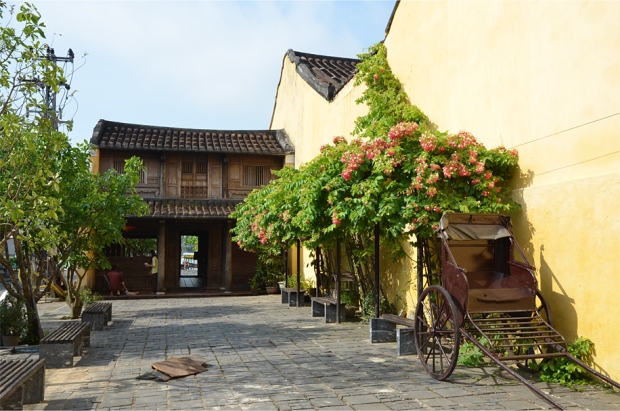 A small, picturesque square with a framed view of the river 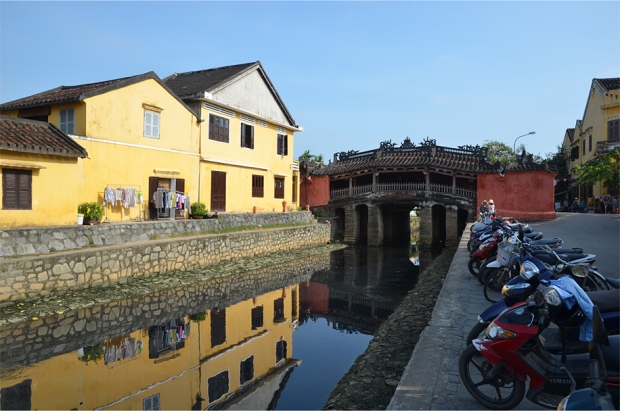 Solitude at the Japanese covered bridge 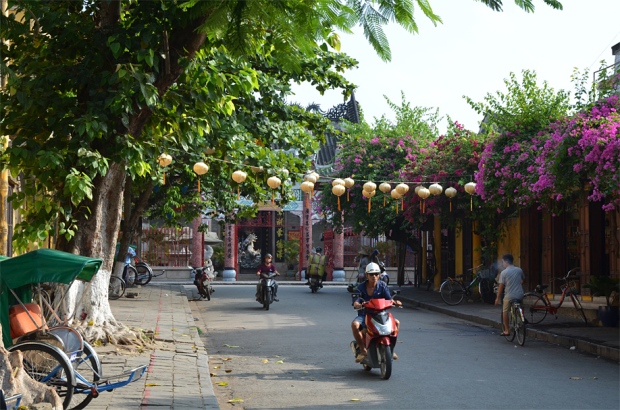 Looking towards the Cantonese Assembly Hall, established in 1785 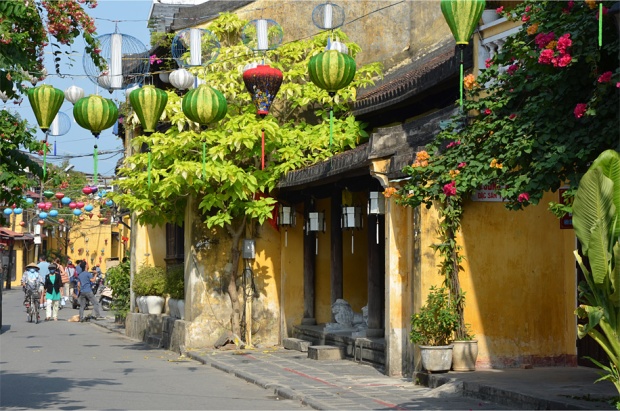 Making a delivery amid the morning calm

Hoi An’s cloth market is a recent but sympathetic construction

The Japanese were a dominant force in Hoi An, but their influence was not to last. Four decades later the shogun (military ruler) Tokugawa Iemitsu closed Japan’s borders and imposed a strict isolationist policy known today as sakoku. The move was meant to curb the influence of the Spanish and Portuguese – and the growth of Christianity – but it also barred the Japanese from leaving their home country and conducting business abroad. Bowing to the shogun’s demands, the last remaining Japanese traders in town packed up and left in 1673. Care of the bridge was passed into the hands of the Vietnamese and Chinese communities, who added on a small temple to the Vietnamese folk deity Tran Vo Bac De, the god of weather. Still, subsequent renovations remained faithful to the original Japanese design. In 1719 the visiting Nguyen lord renamed it Lai Vien Kieu, “Bridge for Travelers from Afar”, no doubt a tribute to the long-departed Japanese merchants.

Hoi An’s fortunes waned at the close of the 18th century with the rise of several large-scale peasant rebellions. The fatal blow came in 1835, when Vietnamese Emperor Minh Mang issued an edict banning European vessels from landing anywhere on the coast except for Da Nang, just 24 kilometers (15 miles) to the northwest. Hoi An languished in Da Nang’s shadow, though its inexorable decline shielded the backwater from some of the horrors of the 20th century.

The American War (as the Vietnam War is known in these parts) did not bring about the kind of wholesale destruction wrought on the old imperial capital of Hue, which suffered artillery and napalm strikes amid weeks of heavy fighting during the 1968 Tet Offensive. Nor did the town share the same fate as the Cham archaeological site of My Son, about an hour’s drive to the west – its priceless temples carpet bombed to flush out Viet Cong soldiers hiding in the jungle. By contrast, Hoi An managed to escape the war entirely unscathed.

Revisiting the Japanese bridge, this time in the afternoon

Reflections of the past 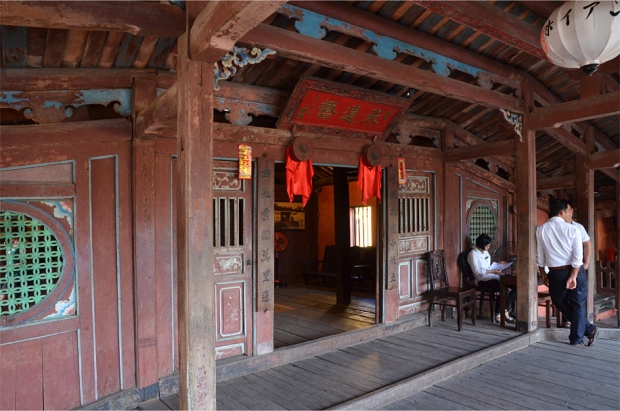 Offerings to the sacred dog and monkey guardian statues 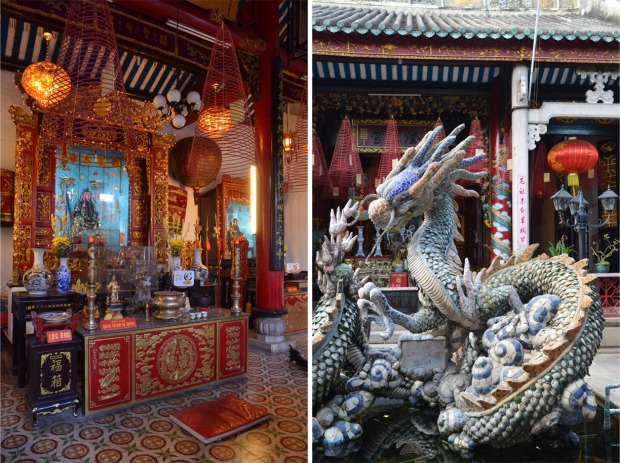 An altar to the Chinese historical general Quan Chong; a mosaic dragon in the courtyard

The inner gate to the Phuc Kien (Fujian) Assembly Hall 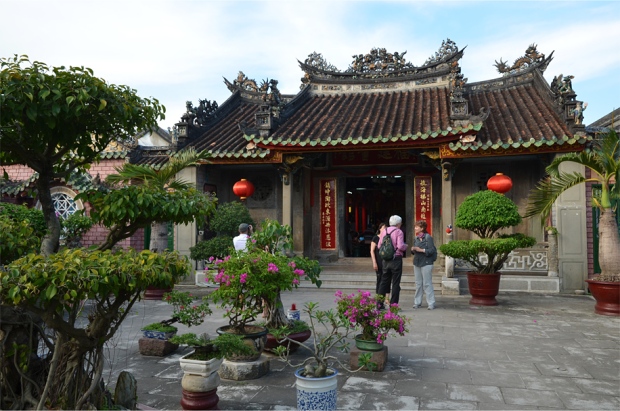 Its main hall, now a temple, dates from the mid-18th century

The sanctuary is dedicated to the sea goddess Thien Hau

Sleepy Hoi An was eventually inscribed on the UNESCO World Heritage List in 1999, and its resulting fame has brought about a surge in tourist numbers. Not that this is entirely a bad thing: the Hoi An of today is spruced up with coats of mustard-yellow paint, and its slew of guesthouses and hotels, shops and restaurants provide a livelihood for younger residents who might otherwise leave for better opportunities in nearby Da Nang.

My initial impression, arriving with Bama early in the afternoon, is that Hoi An resembles Luang Prabang on steroids. I say this because the Vietnamese, with their sharp business acumen, know how to cater to the throngs of foreign tourists who come. And just like Luang Prabang, Hoi An is understated in its charms. The town isn’t dominated by one particular, attention-grabbing landmark – no enormous Buddhist temple, no spire or stupa that defines the skyline, no sprawling imperial palace ringed by fortifications and a moat (as at Hue). Even the iconic Japanese covered bridge is comparatively small, appearing almost squat when viewed from a distance.

Lucky travelers who have visited Hoi An some 10 or even 15 years ago will likely bemoan its ongoing transformation. The booming tourism industry has seen former merchants’ houses converted into upscale restaurants and a profusion of tailoring stores, while the streets and shop fronts are festooned with colorful handmade lanterns all year round. Come nightfall, floating candles in delicate paper rafts are set adrift by old women and other enterprising locals on the Thu Bon River, as classical music drifts over from speakers affixed to the slender poles along the riverfront promenade. In its entirety, the scene is admittedly a bit contrived, but undeniably romantic. Business-minded townsfolk call out on the quayside and from their small wooden vessels: “You want bo rai [boat ride]? Bo rai?”

My favorite time to walk around Hoi An is in the early morning hours, when most visitors are in bed, the riverside market is in full swing, and the streets of the old town are not yet closed to traffic. Local residents can be seen going about their business: delivering fresh produce and other wares stacked on the backs of motorbikes, or stopping for tea and a banh mi breakfast on small plastic stools by the river, just around the corner from the Japanese bridge. These everyday scenes are a reminder that Hoi An is still a living, breathing Vietnamese town – and one that retains its weathered charm beneath a tourist-oriented veneer. ◊ 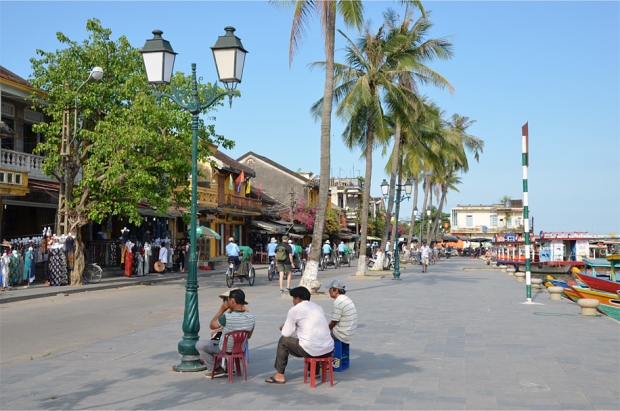 Late afternoon on the riverfront promenade 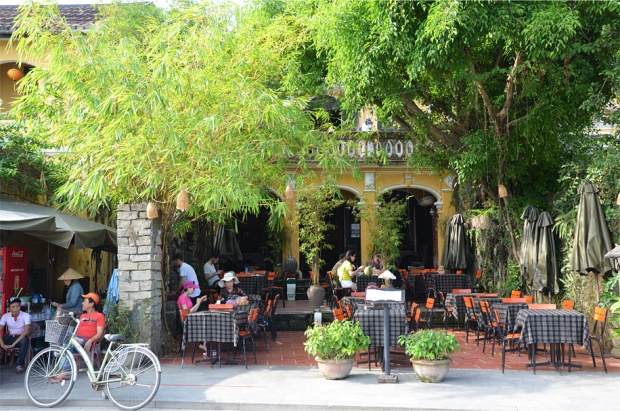 Alfresco dining between bamboo and a banyan 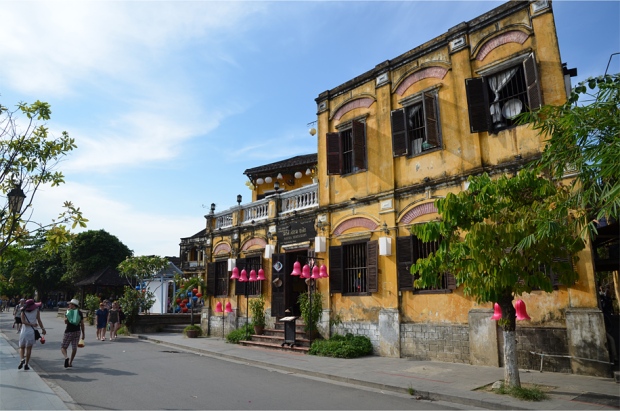 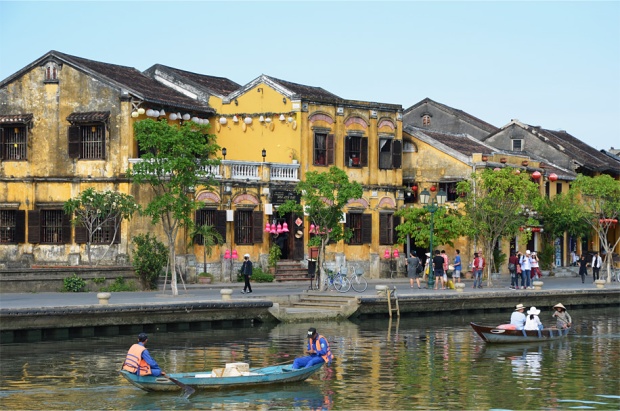 Keeping an eye on the store

Breakfast near the Japanese bridge; looking down the Thu Bon 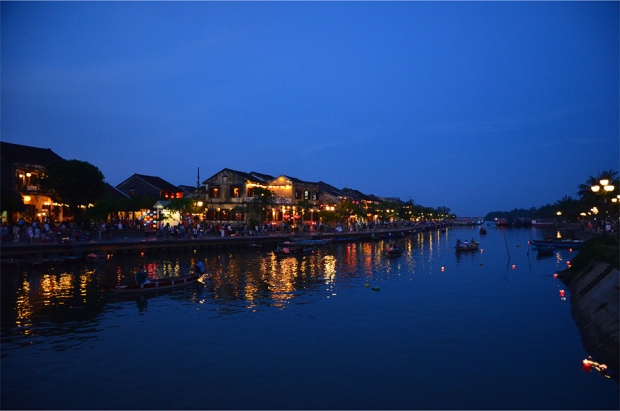 There isn’t a tall, dominant feature – no temple or pagoda – that marks the skyline