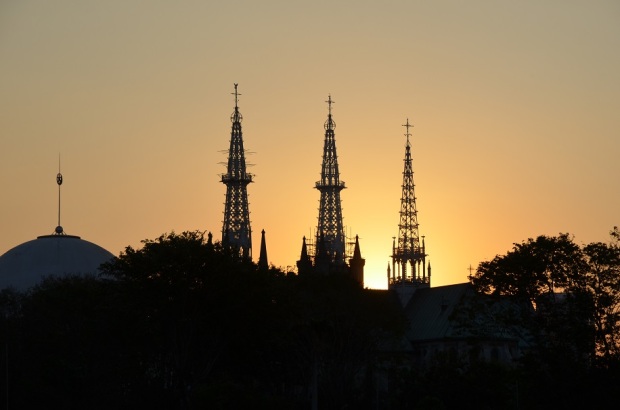 Many moons ago, at the height of rainy season, I left the office in the middle of a howling storm. The lashing rain was blown almost horizontally in the wind, and my umbrella, now turned inside-out, was practically useless. This was, I thought, almost like the typhoons I had grown up experiencing in Hong Kong. Much of the usual route home was covered with murky, ankle-deep water; in nine months of walking from work, I had never encountered this much flooding. Eventually I crossed over to the opposite side of the street, where the pavement was unfamiliar. But therein was my mistake. Before I knew it, my right leg had plunged into a large hole obscured by the swirling floodwaters, and I tumbled forward, palms creating a splash as they hit the underwater asphalt. Overhead, the sky glowed with lightning and the thunder felt dangerously close.

I don’t hate Jakarta, but I’ll admit there are aspects of living here that I find downright infuriating. It’s the fact that so many Indonesians, even educated white-collar workers, are unrepentant litterbugs: the product of a prevailing culture in which people assume that someone else will clean up after them. What also gets on my nerves is the fact that traffic rules here are merely suggestions: motorcyclists are often seen barreling down the wrong side of a major avenue, and have no qualms scattering pedestrians on the pavement. It annoys me that a zebra crossing means nothing to Indonesian drivers, and that sometimes the mere act of walking home feels like going on a suicide mission. Especially so when you’re confronted with six lanes of heavy traffic, speeding motorcycles that swerve only at the last moment, and no traffic lights or footbridges to circumvent a potentially dangerous situation. When it rains, the unpaved road medians turn to mud.

And yet, in spite of the traffic jams, the aggressive and inconsiderate drivers, the pollution, the flooding, and the occasional large-scale demonstration by Islamic hardliners – many of whom are bussed in from outside the city – I still love Jakarta as much as I did when I moved here last May. I love the genuine cheerfulness and sincerity I encounter on a daily basis, the wonderful conversations with taxi drivers on the drive to and from the airport, and the cosmopolitan nature of Jakarta. I love the fact that I can feed my nostalgia for Spain with a glass of tinto de verano (red wine mixed with lemonade) and prawn-stuffed piquillo peppers at a cozy restaurant helmed by a Basque chef, or sip on Japanese-Peruvian cocktails while watching the city lights flicker on from an alfresco terrace atop the highest skyscraper in town. 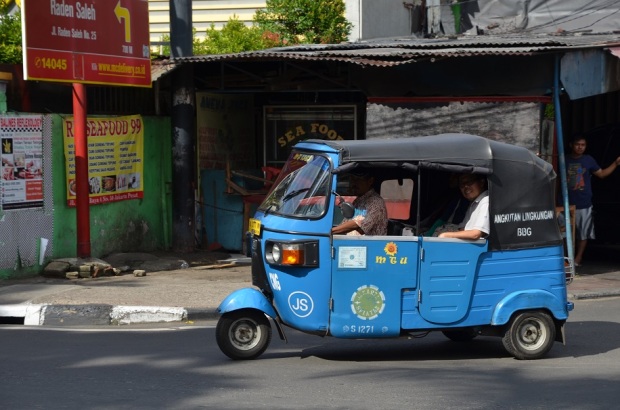 Modernist architecture in the central district of Cikini

A quiet morning outside the Jakarta Theater at Taman Ismail Marzuki

Taman Patung Diponegoro, a small park in the leafy neighborhood of Menteng 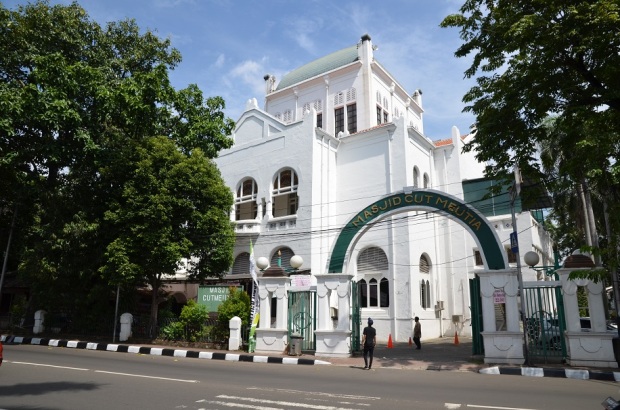 Jakarta is a place where people reinvent themselves, much like New York and Hong Kong. This teeming megalopolis, 10 million strong, is a magnet of creativity, driven by the entrepreneurial spirit common to so many Indonesians. I’ve found that people here have an innate knack for problem solving, a natural response to life in a country where things don’t run like clockwork and the infrastructure is woefully inadequate. One example is the startup company Go-Jek, which has revolutionized the way motorcycle taxis work in cities across Indonesia, delivering food, documents and gifts, and even rolling out a mobile makeup and housecleaning service.

But there’s also a side to the city that is unmistakably down-to-earth. Beyond the gleaming skyscrapers and shopping malls, Jakarta remains a sprawling patchwork of low-rise villages where you might even catch sight of goats or wandering Muscovy ducks. I cannot imagine this place without the ramshackle markets, the call to prayer emanating from the neighborhood mosques, the bursts of (illegal) fireworks on festive nights, or the tantalizing street food found on most corners. I think of the gerobak food cart that Bama and I frequent on weekends for a hearty bowl of chicken congee with all the trimmings – peanuts, shrimp crackers, and slices of cakwe (Chinese cruller) – for less than one U.S. dollar. The narrow road behind my office is lined with informal stalls selling all kinds of deep-fried snacks, and, as I found out one night while working overtime, an indulgent meal of coconut rice served with chili sambal and garlicky, turmeric-scented fried chicken.

Another reason I love Jakarta is the deep sense of belonging that comes with being attuned to the national psyche (Bama tells me I have a very Indonesian concept of time) and the ability to blend in perfectly as a Chinese-Indonesian, one that will only be reinforced as my Indonesian language skills improve with time. Just as important are the friends I’ve made here – many of them through Bama – and my easygoing coworkers who have managed to stay sane despite the mercurial nature of our ill-tempered babe (that’s “boss” in Jakarta’s homegrown Betawi language). They’ve taught me to find humor in even the most stressful situations.

That stormy night, in the yellow-brown floodwaters halfway between the office and my apartment, I received my Jakarta baptism. Only much later did I understand the valuable lesson it had for me: that resilience was not so much a choice but an instinct. Soaked to the bone, I reacted the only way I knew how – by picking myself up and walking on through the flooded streets. In this sopping wet state, I still bought dinner from the usual bakery, while bearing a fresh wound below the knee where the skin had scraped against the edge of that hole. When it healed I was left with a scar resembling a tongue of fire. In that fierce torrential rainstorm I was born again, and given a mark to remind me that I was no longer the spoilt Hong Konger, but a hardier, more tolerant and grateful person – and well on my way to becoming Jakartan. ◊

Immanuel Church, built from 1835 to 1839 in the Indies Empire Style 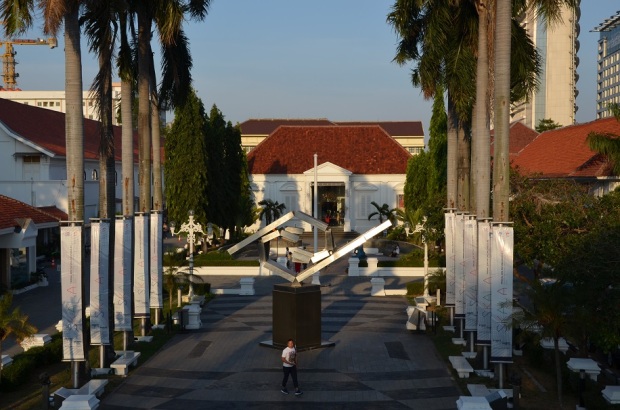 Hotel Borobudur from Lapangan Banteng park; the nearby Indonesian Ministry of Finance 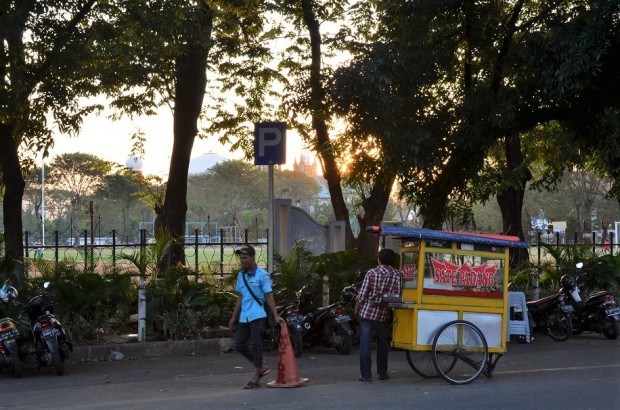 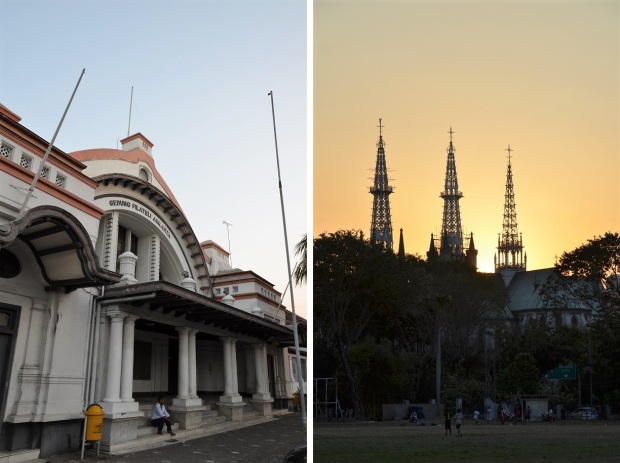 The 1830s Pancasila Building, now part of the Ministry of Foreign Affairs

Jakarta Art Building, a concert hall erected in 1821 as the Schouwburg Weltevreden 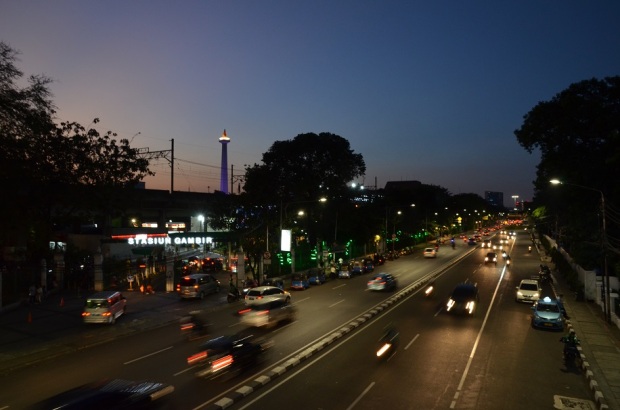 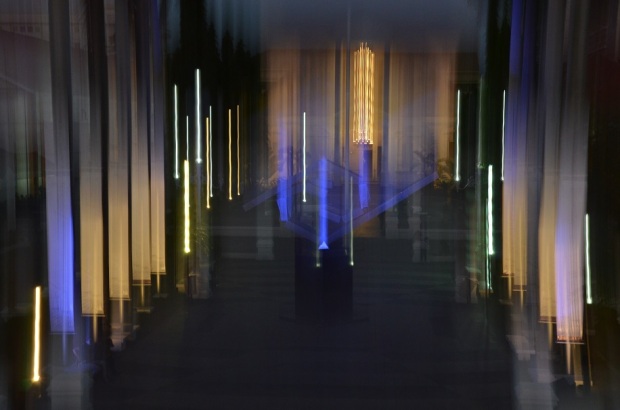 An accidental artistic shot, taken outside the National Gallery

Tags: Indonesia, Jakarta, Living in Jakarta
From: Indonesia
← In Search of Singhasari
A Sydney Food Crawl →
25 Comments Post a comment