Winter in the Swiss Riviera 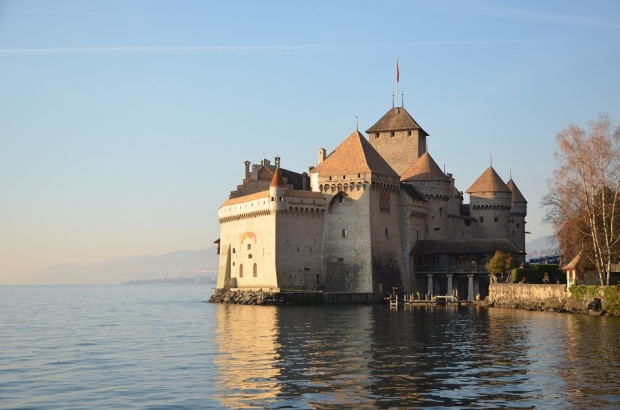 It might be an expensive and touristy affair, but on a cold December evening, Montreux’s Christmas market is a joy to wander around. It’s a cluster of brightly decorated miniature chalets on the waterfront, where visitors can peruse the stalls for seasonal ornaments, artwork, and souvenirs; hand-blown glassware, artisanal soaps, candies and cubes of fudge; and perhaps most importantly, vin chaud – mulled wine of both the red and white varieties. The smell of foie gras sizzling on a griddle wafts into my nose as I stop to savor the warmth radiating from several open, wood-burning fires. Inside the soaring wrought-iron market hall, I browse shelves stocked with homemade jams and confections, and consider ordering what appears to be a Swiss version of mac ‘n cheese.

Montreux is perched on an idyllic stretch of Lake Geneva shoreline that’s known as the Swiss Riviera, and long the haunt of big-name celebrities: Charlie Chaplin, Freddie Mercury, Shania Twain. Part of its enduring appeal is the mild microclimate, dictated by a quirk of geography. The mountains that rise steeply above Montreux shelter it from the cold, dry northeasterly wind the Swiss-French call La Bise, allowing cypresses and palm trees to flourish on the lakefront.

But in a country with no shortage of picturesque towns and cities – like the capital Bern, whose historic center is a UNESCO World Heritage Site – the town of roughly 27,000 doesn’t seem particularly attractive at first glance. A high-rise apartment block stands out like a sore thumb amid the 19th-century buildings that descend in terraces to the lake, and the uninspired modern casino is a far cry from its stately predecessor, which burned down in 1971 during a Frank Zappa concert.

The biggest draws here are Montreux’s famous summertime jazz festival and the nearby Château de Chillon, a storybook castle dating from 1160 that takes up a small island, strategically located near the entrance to the Rhône river’s Alpine valley. It was Lord Byron’s poem, Prisoner of Chillon, inspired by the six-year imprisonment of Genevan monk and political activist François Bonivard, that catapulted the château to fame back in the early 19th century. Today it ranks as the most-visited monument in Switzerland, and one of the country’s most recognizable landmarks. Don’t be fooled by appearances: the castle is far bigger than it looks from the outside, with three courtyards, a central keep you can climb, and a wealth of rooms and passageways to explore. Arriving an hour before it’s due to close, I have barely enough time to see it all. 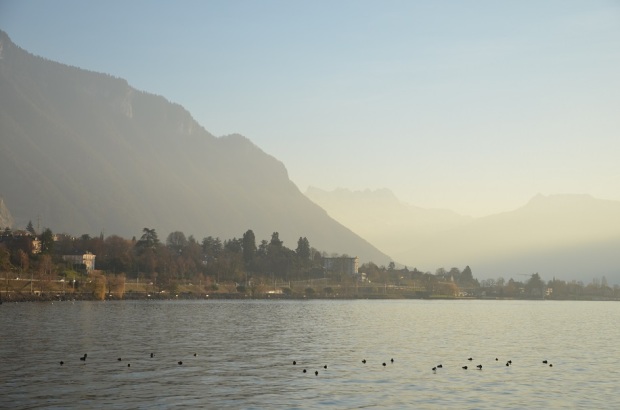 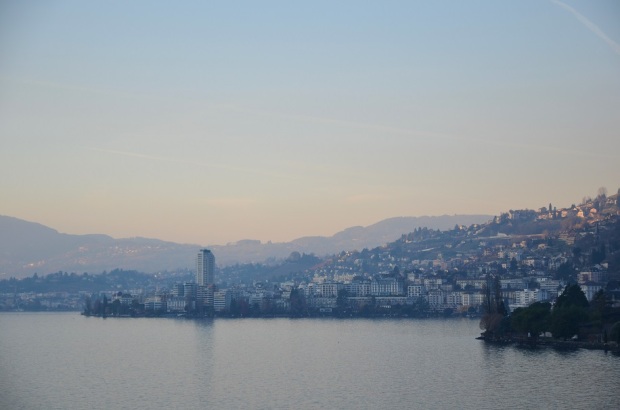 Montreux, as seen from the battlements of Château de Chillon (Chillon Castle)

A magical sunset over the Chablais Alps 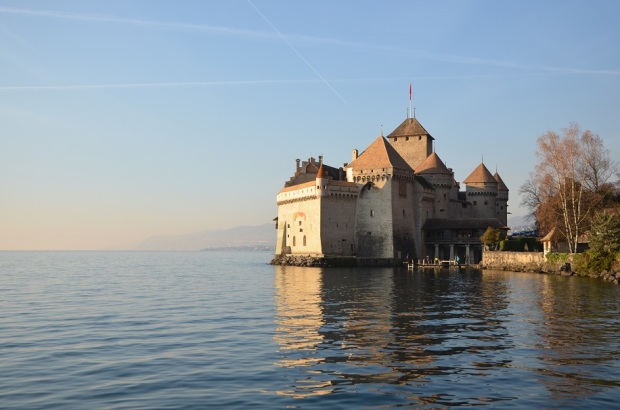 Covered passageways inside the castle

The next morning, I meet Angela Bonetti, a local guide who sports a stylish mop of short hair dyed a striking shade of purple. She recommends a walking tour of the compact Old Town of Vevey, roughly six kilometers (or four miles) to the west of Montreux. In the warmer months, a leisurely stroll along the lakeside promenade linking the two places would be ideal, but it is December and we don’t have much time to spare. Instead Angela and I opt for a 20-minute bus ride, passing several exclusive anti-aging clinics overlooking the lake. Treatments here cost an arm and a leg, but according to Angela, “they don’t work!”

She also spotlights the contributions of immigrants and their roles in developing industries and the infrastructure that is synonymous with Switzerland itself. “The first watchmakers were French, the first chocolatiers were German, the first bankers were Italian, and it was the Italians who built the roads and railways. The real Swiss people were the ones making cheese.”

Angela herself is an Italian-born immigrant; she moved from Naples to Vevey at the age of nine, and started off without a word of French. Not long after the bus deposits us in the center of town, Angela points out the windows of the small apartment her family once shared, and then the college and dental school she attended. We make our way down to the farmers’ market on the lakefront square, and even though it’s winter, there’s plenty of fresh produce to ogle: leeks, mushrooms, carrots, leafy green vegetables, and Chioggia beets. Angela buys me a generous slice of homemade quiche from a friend’s daughter, part of a gang of schoolchildren raising funds for a trip to Berlin.

Then, as we approach a stand piled high with local cheeses I could only wish to take home, she jokingly tells me, “this is the fruit of Switzerland.” But Angela is quick to explain that the country’s official abbreviation CH does not stand for “chocolate” or “cheese”; it’s derived from the Latin name for the Helvetic Confederation, Confoederatio Helvetica.

Living in Indonesia, there’s a general expectation that anyone who travels ought to buy trinkets or edible gifts for friends and coworkers. I’m in the right place – Vevey is the global headquarters of Nestlé, and we make a beeline for Denner, a discount supermarket chain, where great slabs of high-quality chocolate are a steal at just 65 Swiss centimes (approximately 66 US cents) apiece. Much to my amusement, this has turned into an impromptu shopping trip for Angela too. At a nearby boutique, she buys a silvery jacket whose collar comes lined with synthetic fur. The delight that spreads across her face is infectious. “I’ve never done this as a tour guide!” Angela squeals.

Back in Montreux, after lunch at an Italian restaurant steps away from the Christmas market, I treat Angela to a cup of vin chaud blanc – mulled white wine. In turn, she brings me to pavilion serving up regional fare from outside Switzerland. The theme changes with each successive Christmas market; this time, the focus is on her native Naples, and she’s keen for me to sample a famous Neapolitan pastry: the rum-and-sugar-soaked babà.

Sometimes the best kinds of food take on a humble appearance. This is the case with babà, which is shaped like a knobby mushroom. Biting into the glazed, moist exterior yields a dry, airy core – on the whole, it’s a perfect balance of sweet and alcoholic flavors. But I don’t discover that just yet. Sealing the precious babà in a small plastic box, we return to the hotel to pick up my bags and head straight to the train station.

After a whirlwind couple of days in Geneva, Lausanne, and Montreux, I am sad to leave the French-speaking region of Switzerland. From the station, the train snakes uphill and navigates a series of switchbacks, each one revealing vistas that are even more dizzying than the last. Just before Angela disembarks at a village on the steep slopes above Montreux, we part ways with a warm hug and three kisses on the cheek – a greeting that I don’t think I can use in the German-speaking cantons. Eventually the train shoots into the darkness of a tunnel and the sight of Lake Geneva fades into a lingering memory. Even in December, I can still feel the unmistakable pull of the Swiss Riviera. ◊

Rustic details at Château de Chillon; the view from the castle’s central keep 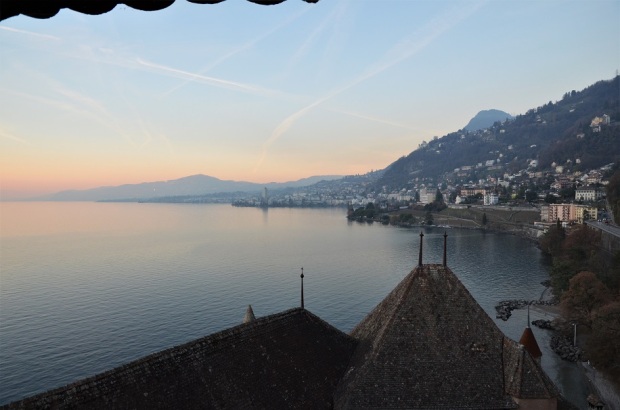 A quiet morning in the Old Town of Vevey

Fresh produce at the farmers’ market 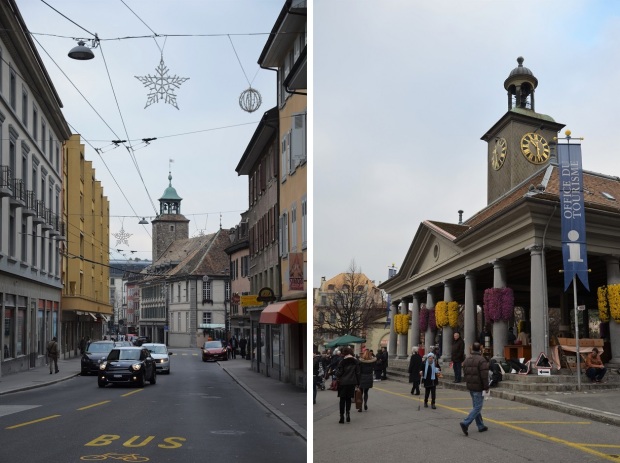