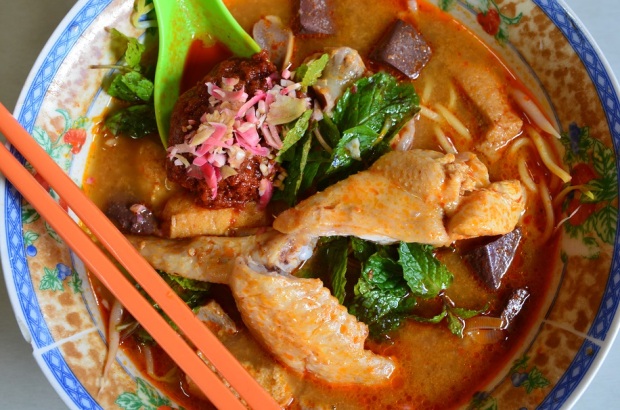 Some of the most memorable travel experiences are those we encounter by chance. And so it was on a sultry August day in Penang, Malaysia, when Bama and I found ourselves staring into two heavenly bowls of curry mee at a quiet hole-in-the-wall on Lebuh Keng Kwee. This street food favorite was an ocher-hued coconut curry soup laden with yellow egg noodles, succulent cuts of chicken, crunchy beansprouts, fresh mint leaves, and porous tofu puffs that absorbed the rich, spicy flavors in the soup base. Each bowl also contained a generous spoonful of shrimp paste sambal topped with slivers of bright pink torch ginger flowers. Reading the account of a blogger who grew up on the island, I now realize that we had inadvertently stumbled across the best curry mee in all of Penang.

The original plan was to have char kway teow, the stir-fried flat rice noodles that are a quintessential dish in Malaysia and Singapore, at Joo Hooi Café just down the street, but by then the place was filled to the brim with hungry patrons. Mobile stalls parked outside sold Teochew cendol, and diners stood up to eat the iced, coconut milk–based dessert as they sheltered below makeshift green awnings. The fragrant aroma of spices and shrimp paste (belachan) wafted over from the café’s open kitchen, where a large tray heaved with fried snacks and a new batch of char kway teow was being teased from the wok. Even though it was well after midday, business at Joo Hooi remained as brisk as ever.

By contrast, the decaying shophouse behind the curry mee stall was devoid of customers. As Bama and I hesitated outside, the cheerful vendor emerged from the cool interior and beckoned us to take a closer look. We were ravenously hungry. I ordered for both of us in English and we sat down at one of just two tables. Above our heads, fading postcards from Europe were tacked to the wall, alongside a laminated newspaper clipping in Chinese that profiled CNNGo’s Top 10 hawker foods in Penang. Curry mee was one of them.

Shuffling in and out as she prepared our meal, the hawker struck up a conversation with an elderly woman seated in one corner. I could barely believe my ears – this was not Mandarin or Hokkien, but a language I had grown up hearing in Hong Kong. “You speak Cantonese?” I asked in the native tongue of my grandparents. She was surprised and relieved. “Oh, why didn’t you say so earlier?”

I soon learned that we shared more than just a common language. It turned out that the curry mee vendor shared the same family name as my mother, and her immigrant ancestors had also hailed from Sze Yup – the four rural counties west of Macau whose residents speak the Toishanese dialect. Mother had once told me that during her college years in 1970s America, a few phrases of Toishanese could earn her a discount on products in the Chinatowns of San Francisco and New York.

“My husband’s surname is Fung,” the vendor smiled. But our conversation took an unexpected turn with the revelation that her stall might not exist the next time we returned to Penang. “In December, we have to move. They are renovating all these houses and opening up the walls to the back. Maybe you will find us in a hawker center or somewhere nearby.” I bristled at the thought of long-standing informal eateries like these being erased to make way for upscale boutiques and restaurants serving overpriced fare – perhaps even a mediocre curry mee. “It’s Li Ka-shing [the wealthiest billionaire in Hong Kong] who is doing this,” Mrs. Fung continued. “He owns a lot here.”

“I Want Pau” [pau means steamed buns], an installation/mural outside a pastry shop 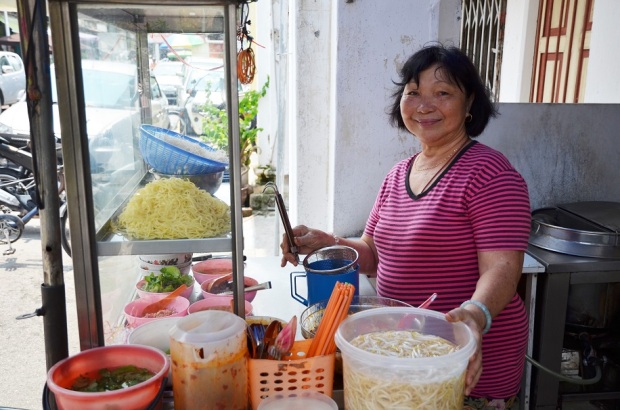 Mrs. Fung, the curry mee vendor, poses for the camera

When a tank is not a war machine; “Little Girl in Blue” by Ernest Zacharevic 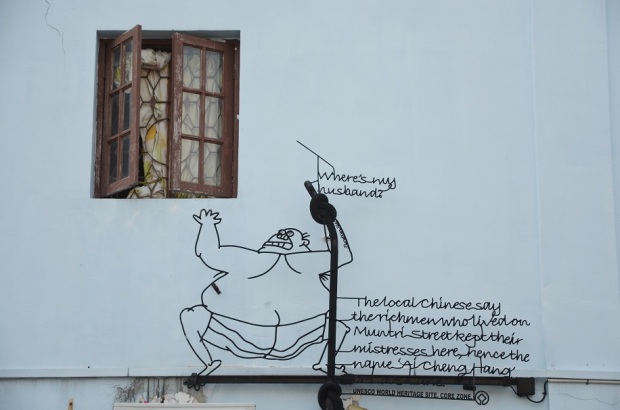 Hiding outside a window, Love Lane

Multicultural George Town, Penang’s state capital and the second-largest city in Malaysia, has a raw appeal that points to its roots in trade and commerce. Its well-preserved historical core became a UNESCO World Heritage Site in 2008, and Mrs. Fung’s curry mee stall stood just inside the designated buffer zone, a low-rise cityscape of arcaded shophouses punctuated by a number of uninspiring modern buildings. Some shophouses have been repainted and dressed up as chic cafés, contemporary stores, and boutique hotels, but a great majority remain inhabited by traditional businesses. George Town has also gained a reputation for its playful street art, with six murals and installations created in 2012 by the locally based Lithuanian artist Ernest Zacharevic among the most popular draws.

We discovered Zacharevic’s iconic “Little Children on a Bicycle” while wandering along Armenian Street (Lebuh Armenian) at midday. On the walls of the Ming Xiang Tai pastry shop, Kuala Lumpur–born W.K. Setor had painted the shop owner’s kids reaching out of a window toward a basket of steamed buns. Then there was self-taught Penang artist Louis Gan’s “Brother and Sister on a Swing” on a nondescript back alley not far from the British colonial–era Malayan Railway Building, now the Customs House. But perhaps the most adorable example was “Love Me Like Your Fortune Cat”, one of 12 cat-themed murals painted to raise awareness of strays and abandoned animals.

One morning, Bama and I ventured outside of George Town to visit the hillside Kek Lok Si Temple and try the famous assam laksa at nearby Air Itam Market. Even at 11:00 am, its tables were mostly full. We happily slurped up the melt-in-the-mouth noodles, but the soup was the undisputed star of the dish. The umami flavor of shredded mackerel and the tartness of tamarind were counterbalanced by palm sugar–infused soy sauce, the fragrance of mint leaf, chopped shallot, and the perceptible heat of chili. The assam laksa packed in so much flavor that its aftertaste lingered on my palate for the next 20-30 minutes, or most of the bus ride back into George Town.

There was another street food specialty that I absolutely had to eat before leaving Penang. After a fruitless 40-minute walk to Jalan Siam in search of its celebrated char kway teow stall, we returned to Red Garden Food Paradise, a covered food court beside our hotel. For the past several days, Bama and I had seen diners shuffling in and out of the space from our seventh-story room. We had fallen asleep to the thumping live music that drifted up from the stage each night – covers of popular nineties songs, including a soulful rendition of “Zombie” by The Cranberries, and Teresa Teng’s hit Mandarin ballad “The Moon Represents My Heart”. I imagined how frustrating it would be for guests staying at the historic Blue Mansion next door.

The char kway teow at Red Garden was even better than I had anticipated. Stir-fried in lard, it was a mouth-watering heap of glistening rice noodles tossed with shrimp, slices of the sweet, air-dried pork sausage the Cantonese call lap cheong, and tasty shelled clams known as blood cockles. I also ordered a portion of or luak, or oyster omelet, to share with Bama. Annabelle, a childhood friend then living in Singapore, had recommended it the previous night on Facebook. “The oyster omelets in Penang are better,” she wrote. “They’re made with duck eggs. Singapore’s ones have chicken eggs and loads of flour because fresh duck eggs are banned here. Malaysia still uses duck eggs so everything tastes better there!” I could see where Annabelle was coming from. The small, succulent oysters bursting with flavor were bundled in smoky, scrambled duck eggs that were neither too runny nor too firm. In other words, this dish – like the char kway teow, the assam laksa, and the curry mee before it – had been cooked to perfection. ◊ 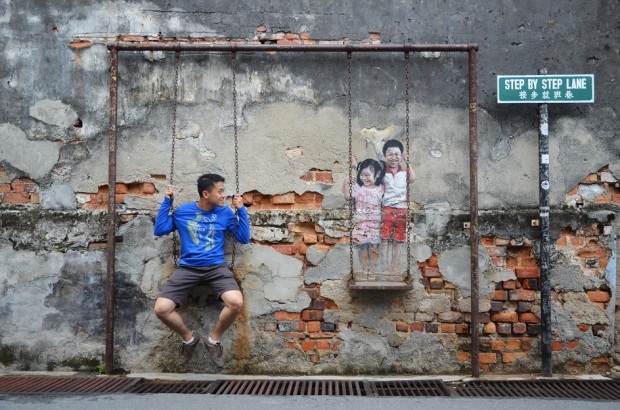 Bama enjoying “Brother and Sister on a Swing”, an installation by local artist Louis Gan 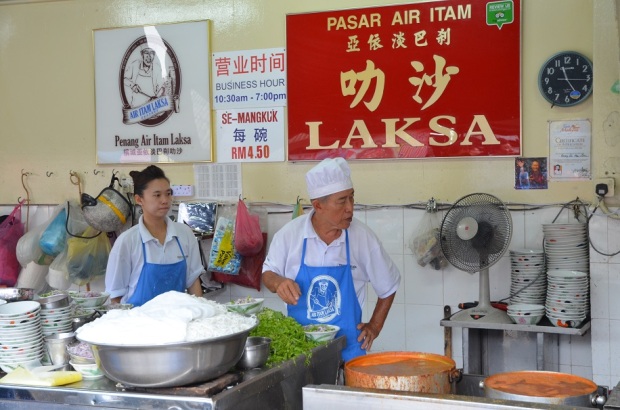 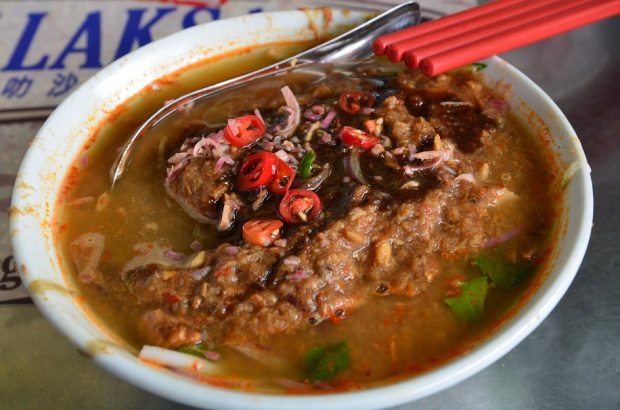 Assam laksa is a must-try while in Penang 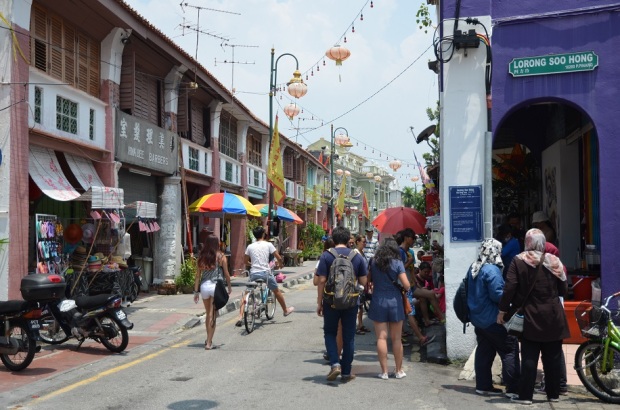 A Chinese, Indian, and Malay girl in elaborate dress; a larger-than-life boatman on Stewart Lane

Another Penang specialty, nasi kandar comprises rice with a choice of curries and side dishes 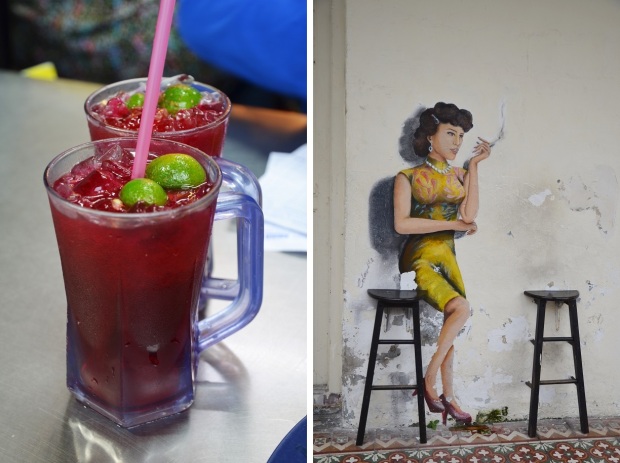 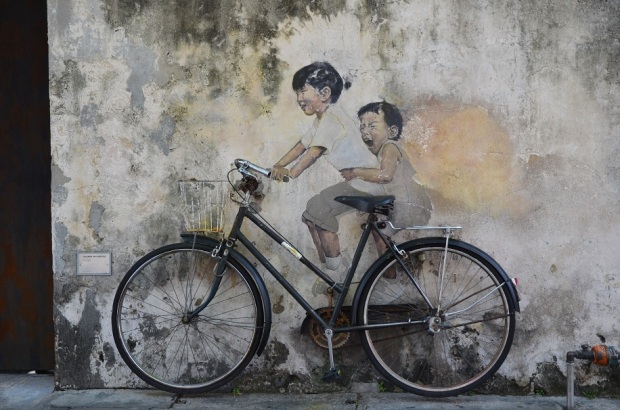