Banjarmasin: Life on the River in Borneo 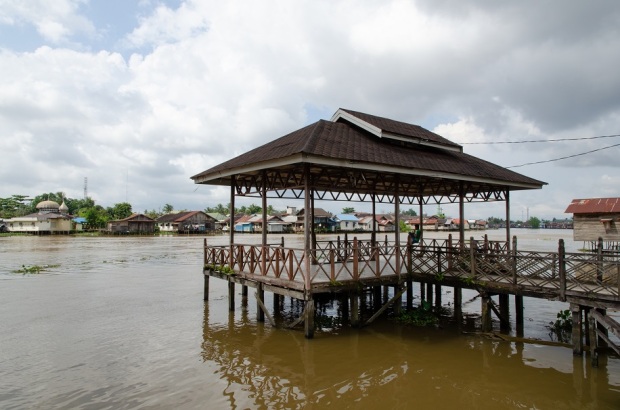 It came without warning. Barely a minute earlier, Bama and I had been puttering down a narrow waterway lined with ramshackle wooden houses, softly lit by the full moon as it peeked through a wispy layer of cloud. But here was a vast expanse of water that seemingly merged into the darkness of the pre-dawn sky. At once I felt infinitesimally small; the absence of lights on the opposite bank exaggerated its distance, and our boat was now dwarfed by an oil tanker and hulking flat-bottomed barges laden with heaps of coal. I knew then that we’d arrived on the mighty Barito River.

Much has been written about the Thames, the Seine, and the Tiber as they wend their way through some of Europe’s oldest and most celebrated capitals, but all three pale in comparison to the Barito. The third-longest river in Borneo is undammed and untamed; from its source in the Müller Mountains it carves a natural highway through the island’s otherwise impenetrable jungle. Not far from the sea, the Barito swells to a width of 1.2 kilometers (or 4,000 feet) as it reaches Banjarmasin, the largest city and capital of Indonesia’s South Kalimantan province.

Bama had floated the idea of a long weekend in Borneo, an island I’d never visited before, to show me the city he was named after (“Bama” is a contraction of the word Banjarmasin). He’d spent one and a half years living here as a toddler, and another year and a half elsewhere in South Kalimantan. Understandably, he was excited to see just how much it had changed in the three decades since his family upped sticks and moved back to Java.

The 40-minute drive from the airport to our downtown hotel took us past banana trees and fallow fields, utilitarian shophouses, convenience stores, and the occasional brightly painted school or mosque. The outskirts of Banjarmasin looked like those of any other medium-sized Indonesian city, but with one major difference. At almost the same level as the roadway, there were small channels and pools filled with liquid as dark as night. “Do you see that black water?” Bama gestured out the window. “That’s because of the peat swamps.”

At the mosque’s main entrance; a breezy veranda outside the prayer hall

Inside, original 16th-century features include the mimbar (pulpit) and four central columns

One last look at the vividly painted interior

The Martapura River as it flows through downtown Banjarmasin

Itik panggang, or roast duck, with a delicious sweet-savory sauce

A corridor at Warung Pondok Bahari; pre-dawn darkness on the River Kuin

Not for nothing is Banjarmasin nicknamed the “City of a Thousand Rivers”. Bounded to the west by a great sweep of the Barito, the low-lying settlement of more than 700,000 inhabitants is laced with a labyrinthine network of waterways centered on the Martapura River. It’s common to see local women in longboats selling fresh produce harvested from nearby farms, and if they must paddle in the blaze of the equatorial sun, a large bowl-shaped rattan basket doubles as a wide-brimmed hat.

Even in the heart of the city, daily life revolves around these rivers. Our hotel looks directly onto the muddy Martapura, and lies just across the bridge from Pasar Sudimampir – the traditional market where Bama’s mother once bought her everyday groceries. A little upriver, schoolgirls shoot hoops on a basketball court beside a colorful, 6.5-meter-high (or 21-foot) proboscis monkey statue that’s meant to spew water from its mouth, just like the Merlion in Singapore.

The afternoon sun was beginning to sink toward the horizon as our driver Iwan navigated the roads along the muddy Kuin, one of the smaller waterways running between the Martapura and the Barito, to the Sultan Suriansyah Mosque – the oldest building in town. First built in the 16th century under the auspices of Banjarmasin’s first Muslim ruler, it has been renovated and expanded multiple times. But the newer sections have always maintained a traditional appearance. The structure is a lovely combination of wooden walls, arched portals, and breezy verandas, crowned with tiered pyramidal roofs whose ornate pinnacles and gable ends sport motifs from the Dayak tribes living further inland.

As at the Great Mosque of Medan, a friendly caretaker welcomed us inside. “Anyone can enter the mosque,” he said with a gentle smile. We left our shoes at the entrance and shuffled into the soaring prayer hall, where the caretaker pointed out a few original parts, including the wooden mimbar, or pulpit, and the four central pillars.

Bama and I returned to Sultan Suriansyah Mosque early the next morning, before dawn, in the hopes of chartering a boat from the riverside quay to reach the floating market at Lok Baintan – a small village an hour’s drive from downtown Banjarmasin. Iwan recruited a passing boatman who took us onto the Barito to stock up on jerry cans of fuel at a floating house that doubled as a general store.

Chugging up a placid channel en route to the Martapura River, we heard the call to prayer ringing out from mosques along the riverbank as the city began to stir. Overhead, the skies transitioned from pitch-black to midnight blue to a dull grey, its mood mirroring the disappointment we felt, for Bama and I both knew the journey was turning out to be much longer than anticipated. Our boat’s painfully slow progress meant that we were going to miss peak trading time at 6 am. In fact, we never did make it to Lok Baintan proper: some three hours after setting out, our skipper cut the engine on a stretch of the river where enterprising vendors paddled downstream to meet the tourist boats coming up from Banjarmasin.

But it was still an eye-opening experience nonetheless. Most longboats came piled with small heaps of fresh fruit and vegetables, while others offered hot meals wrapped in food grade paper or banana leaf, plus an assortment of sweet and savory, deep-fried snacks. There was even a vendor who grilled sate (satay) as she plied the river. In between taking pictures, I picked up a couple of homemade sugar-dusted donuts while Bama procured some unfamiliar fruits. We saw local women hawking limes the size of a softball with rough, pitted peels, bunches of pale yellow langsat (lanzones), and buah mentega – “butter fruit” resembling a large persimmon but with velvety skin covered in tiny hairs. Native to the Philippines, its Indonesian name perfectly describes the subtle taste and soft, custard-like flesh.

A moment of solitude

Selling a cornucopia of tropical fruit with a smile

Fellow tourists taking in the spectacle 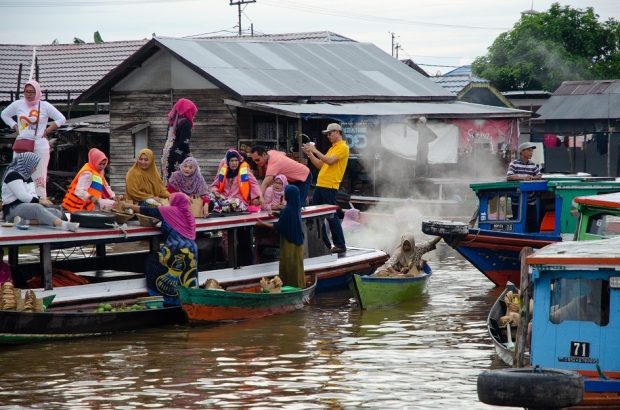 Getting down to business

Market vendors bartering and selling goods between themselves 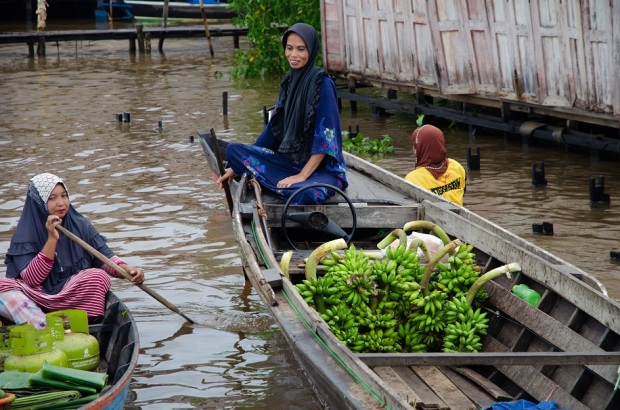 Gas canisters and bananas – both a lovely green hue

As an inveterate foodie, I couldn’t spend a long weekend in Banjarmasin without seeking out the local fare. My first brush with Banjar cuisine happened three years ago when Bama’s mother, Auntie Dhani, cooked us soto Banjar at her home in Semarang. The South Kalimantan variant of a popular pan-Indonesian soup, soto Banjar is what people in colder climes might call a “summer dish”: it comprises shredded chicken, fried potato patties, boiled egg, and cellophane noodles (soun) in a light but flavorful broth spiced with clove and nutmeg.

Auntie Dhani had given Bama the names of several specialties ahead of our trip, but it was the locally-based blogger Sherly who steered us toward the right places to try them. On our first evening, she recommended a street-side eatery called Depot Madezo for itik panggang, or roasted duck, chopped up into bite-size pieces for dipping in a sweet-savory chili sambal, and eaten with long-grain rice alongside a small bowl of clear broth with rice noodles.

Round two of dinner saw us heading to Warung Pondok Bahari, an informal 24-hour restaurant with a no-shoes policy, where we sat on the woven rattan lampit mats – a feature Bama still remembers from his early childhood in South Kalimantan. We had come to taste ketupat kandangan haruan: rice steamed in a packet of woven palm leaf, served with fried snakehead murrel (a native fish) in a lip-smacking sauce using coconut milk and turmeric balanced with a medley of other spices. I couldn’t understand how Banjar food had remained virtually unknown beyond the provincial boundaries of South Kalimantan – it was quickly becoming one of my favorite Indonesian regional cuisines.

On our return from the floating market, Iwan drove us to a no-frills eatery known for its hearty breakfasts. The South Kalimantan take on turmeric rice (nasi kuning) differs from the kind we are more accustomed to eating at Jakarta’s canteens and restaurants. People in this part of Borneo have a penchant for drier long-grain rice, as opposed to the fluffy, short-grain varieties preferred in Java (“We like ours pulen – which means soft and moist,” Bama explained). The dish included a chicken drumstick smothered in masak habang, a mild, sweet-savory sauce combining dried red chilies, palm sugar, cinnamon and other ingredients. Served with deep-fried strands of shredded coconut, our breakfast came wrapped in a hefty parcel of banana leaf.

The approach to downtown Banjarmasin 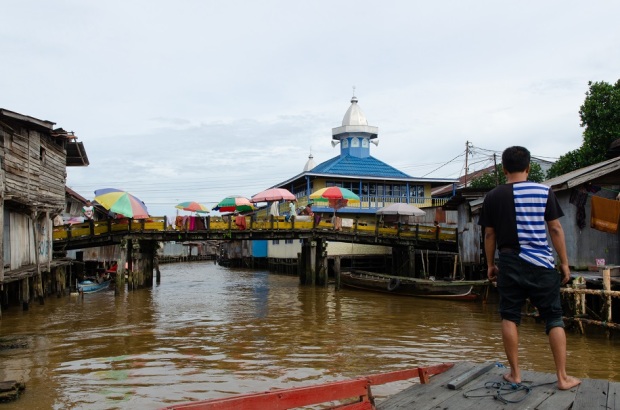 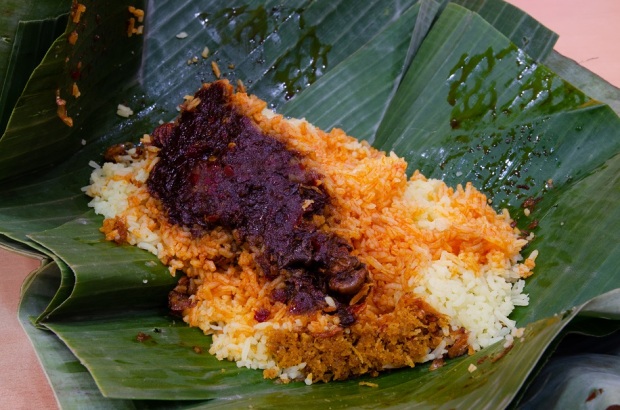 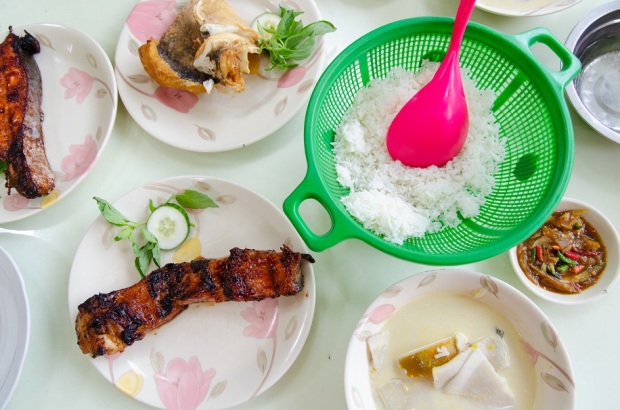 We had met Sherly once before in Jakarta – she is a fellow history buff and longtime reader of Bama’s blog – and this time she’d arranged for a lunchtime catch-up at restaurant Depot Sari Patin. There’s no question that Borneo is a beautiful and incredibly resource-rich island, but human greed is taking its toll. Coal mining, rampant deforestation for the logging and palm oil industries, plus the extraction of diamonds, rubies, and other rare gems have caused significant erosion and turned the Martapura and Barito a dusty-brown hue. “My mother recalls that the rivers here used to be green,” Sherly explained at the table. Spread before us was a feast of fried glass catfish, plated up whole; a sweet, coconut milk-based vegetable soup with pumpkin; a large basket of white rice; and fermented chili-and-mango sambal. But the star of the meal was the ikan patin or silver catfish, which had been basted in a delicious sweet sauce before being grilled over charcoal. The result was a melt-in-the-mouth delight, fatty, juicy, and wonderfully charred on the top. Bama pronounced it the best grilled fish he’d ever had.

The final morning of our trip began with a visit to Sabilal Muhtadin Mosque, the sole place in Banjarmasin that Bama recalls from his time as a toddler in the city. Built in 1981 on the site of a Dutch fort that once guarded the Martapura River, the concrete structure is thankfully clad in polished stone, sporting a beguiling mix of space-age saucer domes and exuberant Dayak motifs shaped in metal. Bama’s parents had taken a portrait of him in front of the mosque three decades before, and he naturally asked me to do just that on the very same spot.

Just before heading to the airport for our flight back to Jakarta, we couldn’t help getting an early lunch at Soto Banjar Bang Amat, an obligatory stop for most visitors returning from the floating market. A live band decked out in costumes dyed a rich purple and blue performed folk songs as we dined inside a stilted wooden dining room perched above the Martapura River. Slurping up a delicately spiced soto Banjar that wasn’t dissimilar from Auntie Dhani’s version – and sinking my teeth into a side of chicken sate (satay) covered in sweet, luscious masak habang – I could see myself coming back to Banjarmasin not just for the chance to see the real floating market at Lok Baintan, but also to get my fill of its unsung cuisine. ◊

Sabilal Muhtadin Mosque, the largest one in town and a well-designed landmark

Intricate Dayak motifs on the doors and minarets 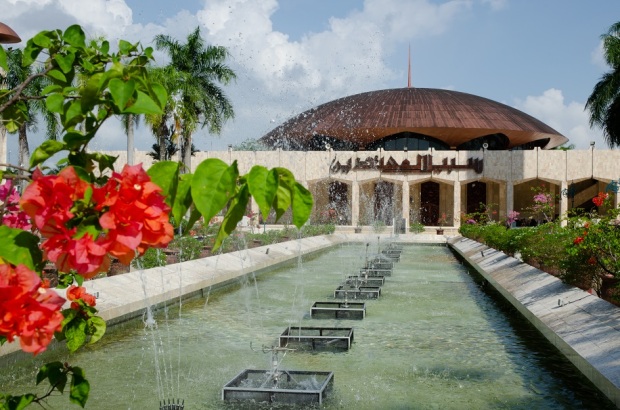 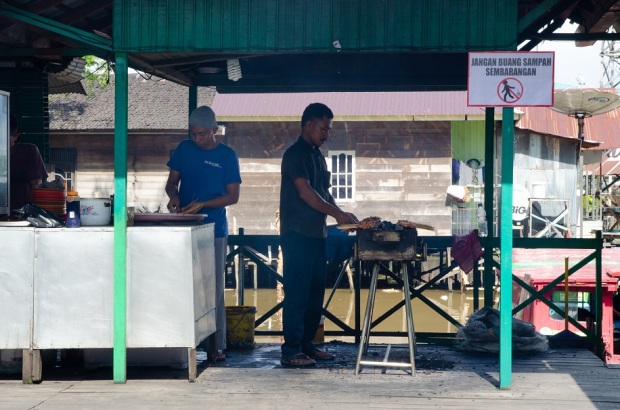 Soto Banjar, the local riff on a chicken soup beloved all across Indonesia