As the motorized tricycle loudly puttered down the two-lane road hugging the northwestern coast of Panay, the Philippines’ sixth-largest island, I could clearly see the effects of Typhoon Rosita (Yutu) as it approached the shores of Luzon some 530 kilometers (or 330 miles) to the north. The agitated waters of the Sibuyan Sea seemed to dance feverishly beneath brooding gunmetal-gray skies; it didn’t bode well for the boat ride I was about to take across the narrow strait to tiny Boracay.

It was October 29, 2018, just three days after Boracay had formally reopened to tourists on the heels of a controversial six-month shutdown, and I had come to report on the drastic changes that had taken place on this island of just 1,032 hectares (2,550 acres). I was curious to see how authorities were rebooting the Philippines’ most celebrated beach destination. Pint-sized Boracay had welcomed an astounding two million tourists in 2017, largely drawn by the postcard-perfect stretch of bone-white sand running four kilometers along its western coastline, aptly named White Beach. Others came for watersports like stand-up paddleboarding and kitesurfing run out of the small, budget-friendly hotels fronting the reef-protected bay at Bulabog, a short walk from White Beach across a heavily built-up neck of land. Then there were the parties. Fire-dancers and superstar DJs like Steve Aoki set the scene for celebrations like the annual LaBoracay festival over the Labor Day weekend. Boracay was even crowned with the title “Best Island in the World” by big-name international magazines like Condé Nast Traveler.

But its meteoric rise masked an underlying problem that was getting harder and harder to ignore. By the time a cousin went six or seven years ago, Boracay had become a poster child for overtourism. His assessment? “White Beach was beautiful, but when I went snorkeling there was nothing to see – all the corals were dead.” Indeed, a Japanese-led environmental study found that the island had lost a whopping 70 percent of its reefs between 1988 and 2011, partially because corals were being trampled by hordes of careless snorkelers. Just as alarming was the fact that its waters had been tainted by raw sewage. High concentrations of coliform bacteria (exceeding safe levels by as much as 47 times) were detected in Bulabog Bay, while algal blooms appeared with increasing regularity, discoloring the azure-blue water and washing up on White Beach in sickly green patches. Boracay was now a cautionary tale for the rest of Southeast Asia – a picture of how rampant, uncontrolled development could subsume a once-tranquil backpackers’ haven beneath a tide of mass tourism.

Of course, that was all before the aforementioned shutdown on the orders of Philippine president Rodrigo Duterte, who infamously branded the whole island a “cesspool” last February. The jewel in the country’s tourism crown no longer accepted visitors as thousands of Filipinos suddenly found themselves without work, deprived of their livelihoods for the next six months. The government introduced strict regulations in an attempt to reverse years of environmental damage and set things right. Not only would every hotel need to be hooked up to the expanded sewerage system; those on the beachfront now had to install their own small-scale water treatment plants or team up with neighboring properties to build a shared one. And any beachside structure found to be within 30 meters of the high-tide mark would be torn down. Hotels that did not comply with the new rules simply wouldn’t be granted permission to reopen.

The rules would also affect visitors, with no tourist allowed to set foot on the island without an advance booking at a government-approved hotel. And so it was with a tinge of trepidation that I arrived at Caticlan Jetty Port, where constantly shifting lines led to an ad-hoc tourist verification counter in the car park. Representatives of the provincial government were on hand to scrutinize a printout of my hotel booking and check it against a list of approved lodgings. Inexplicably, the verification form required far more detail than the immigration card I’d filled in before touching down in Manila just that morning. A purple stamp on the back of my hand signaled that I could move onto the next stage. Then it was time to pay for the actual ferry ticket, a separate “terminal fee” at the next counter, followed an environmental charge, all on different scraps of paper. I still had to put my bags through an x-ray machine and write down my personal details on an additional white sheet. This was collected by an officer before I finally boarded the boat via a rickety gangplank.

By the time I’d crossed the channel, flagged down a tricycle for the final leg, and checked in to a cheap hotel on Station 3 – roughly one-third the way up White Beach – I was exhausted. Not so much by the convoluted pre-boarding process that had confronted me at the ferry terminal, but the accumulative effects of what was an already long journey. Getting here had involved a four-hour red-eye flight from Jakarta, followed by a six-hour layover in Manila before the short hop to Caticlan, whose small airport was easily the closest to Boracay. After tucking into Filipino fast food and stocking up on bottled water at an eatery just a few doors down from the hotel, I took a much-needed shower and collapsed into bed.

The next day brought a lunch appointment with the general manager at Discovery Shores Boracay, a five-star resort at Station 1 on the quieter northern end of White Beach. Not wanting to show up soaked in sweat, I hopped onto the back of a motorbike piloted by 26-year-old Kevin Obiso. The shutdown had cost him his job as a waiter at a Boracay mall, and since returning from a stint as a street food vendor in Manila, Kevin’s meager income now came from his informal work as a habal-habal (motorcycle taxi) driver. “If the restaurant doesn’t reopen, I will apply to be a waiter at another place,” he told me, as we wove through the single-file traffic down a dusty, half-finished road. Eventually I bid goodbye to Kevin outside Discovery Shores and wished him luck. Once inside the resort’s newly opened Italian restaurant, I was quickly introduced to Anthony Raymond, a Manila-based chef who regularly visits Boracay to help supervise Discovery Shores’ kitchens. “I’m jealous that this is your first time here,” he said cheerfully. “And seeing how pristine the water is – how there aren’t any boats and how quiet it is with no jet skis.”

One of Boracay’s sandcastles; an electric mini-jeepney plying the new road to Bulabog Beach 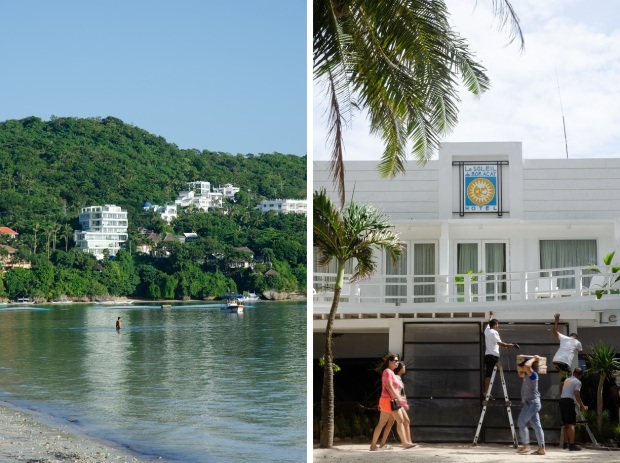 Taking a dip in the shallow waters off Bulabog; prepping for high season at a beachfront hotel

Taking the dog for a walk on Bulabog Beach

“Rush hour” on a newly widened road; local kids and a banca boat at Bulabog

Strolling down Bulabog’s shores at low tide; a lifeguard on White Beach

Longtime residents and veterans of the local tourism industry exclaimed that White Beach – since cleared of umbrellas, sun loungers, even the large sandcastles that were popular photo ops – now looked as it did 20 years ago. The dramatic improvement in the water quality was beyond all doubt. Local municipal lawmakers, led by a prominent watersports athlete turned environmentalist, passed a regulation banning single-use plastics throughout the island. And the government no longer allows smoking, drinking, and open fires on the beach, while big parties and casinos have also been banned in an effort to transform the island into a more family-friendly destination. “There was a lot of political will behind this,” Anthony added. “It’s a lesson for the other [Philippine] islands on what can be done in a short time.”

Soon the jovial general manager, Erwin Lopez, walked in. He was a casually dressed, youthful-looking Manileño who appeared to be about my age, if not a few years older. Over plates of squid ink spaghetti and salad dressed in a dollop of homemade ricotta, he made the case that Boracay never lost its easygoing vibe despite the rampant development over the past decade. Understandably, Erwin wasn’t too pleased with some of the new rules, particularly the ban on portable furniture at White Beach. “They also have to think about guest comfort. How can we offer a world-class experience – and I mean the beach in general – if we tell them to lie on a towel on the sand and roast in the sun? Beach beds and sun loungers are something we must have.”

I then got a taste of the Philippines’ fabled culture of hospitality. When Erwin found out I was a big fan of Filipino food, he asked the waitstaff to bring in generously portioned local specialties from another of the resort’s restaurants: crispy pata (deep-fried pig trotters served with two or three dips) and Bacolod kansi, a sour young jackfruit stew. The crispy pata, for the record, was utterly divine. Our lunch came to a sweet finish with an enormous scoop of homemade ice cream in a classic Filipino flavor that happens to be my favorite, not only because of its striking violet hue but also its rich earthiness. This was none other than ube, or the humble purple yam.

Looking towards Station 1, the quieter end of White Beach

Heading into the blue; rosary beads on the Marian shrine at Boracay’s Grotto 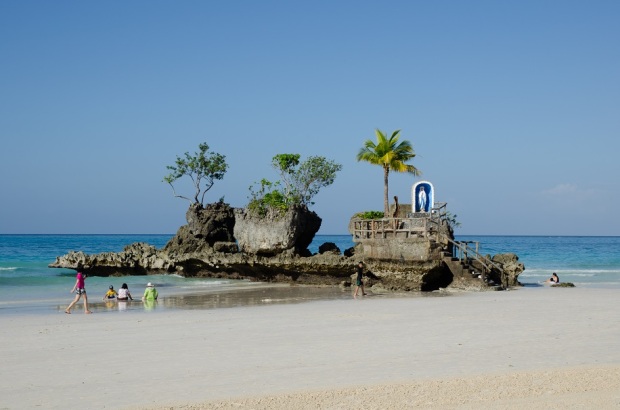 Those of you who have followed my blog for some time know that I am an inveterate foodie, and though Boracay’s beaches were extraordinarily beautiful, nothing could shake my abiding interest in Filipino cuisine. After going on an extended tour of the resort and a languid stroll around the headland to neighboring Diniwid Beach, Erwin and I parted ways as evening begins to fall. Acting on his recommendation, I took the short walk from my hotel to Subo Boracay, where patrons dined alfresco in a breezy courtyard or a stilted wooden pavilion with a no-shoes policy. Both were undeniably atmospheric, but I preferred the latter for its capiz-shell windows and timber fretwork, not to mention how it feels like stepping into the ancestral home of a local friend. The dining room was festooned with antique lamps hung from the rafters, a tall tribal woodcarving in one corner, bulky vintage clothing irons placed beside slender wooden pillars, and an arrangement of decorated old spoons framed on one wall. I immediately noticed that all female waitstaff wear a billowy embroidered scarf in a nod to the Spanish colonial-era pañuelo.

Over the next two days, Subo became my go-to spot for meals between interviews and explorations of the island. My first choice was a hotplate of sizzling sisig (chopped pork jowls and ears) with two fresh eggs cracked over the top, offset by a tangy young mango salad dressed in shrimp paste on a bed of diced red onions and tomatoes. I also tried the garlicky squid-ink fried rice humay negra and grouper kinilaw, or Filipino-style ceviche, on two separate occasions. At one point, a quiet lunch service allowed me to strike up a conversation with a server named Rosalie, who had managed to retain her job even when tourism dried up for six months. But business was quickly on the rebound. “Last night we were so busy,” she said with a smile. “We had Chinese, Koreans, people from Manila… every table was full. Tomorrow we’ll have live music and traditional dance performances at seven. You should come!” Other venues across the island were also in a festive mood: I heard Silent Night being played over the sound system at one beachside restaurant even though it was only the end of October. For those on Boracay whose livelihoods are wholly dependent on tourism, the island’s reopening must have felt like a much-awaited Christmas gift. ◊

Bacolod kansi and crispy pata at Discovery Shores Boracay; tables in the sand at the same resort 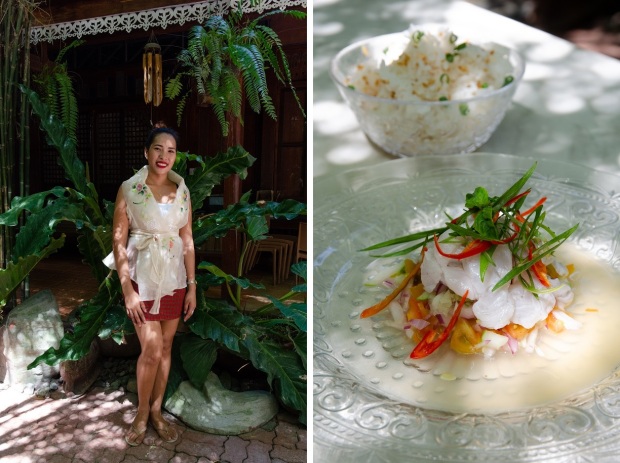 Waiting for day’s end; drinks with a view

A magical sunset over the Sulu Sea 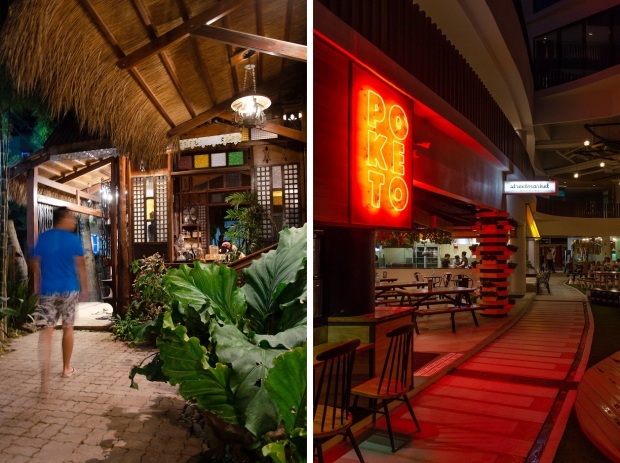