Mulling it over – The Road to Iona, Scotland. 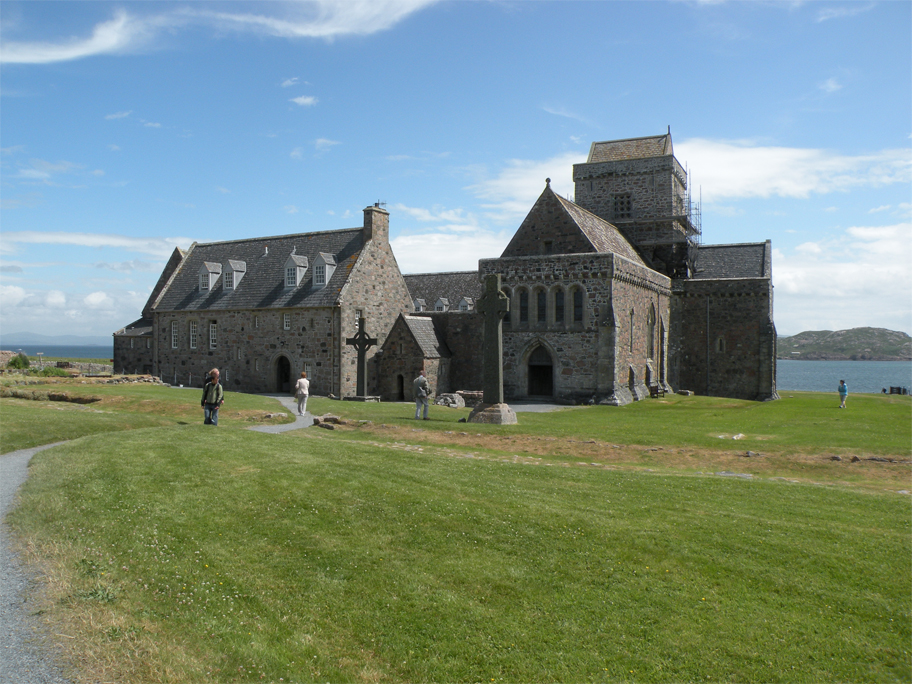 It is a damp Sunday morning and we are down at the pier, amongst a crowd of weekend day-trippers from as far afield as America and New Zealand. We are boarding the 9:50 ferry out of Oban, on what is the first leg of a 2-hour journey to the fabled island of Iona.

We take our seats on the exposed upper deck of the ship and wait for its departure. Around us everyone is decked out in raincoats and windbreakers. On the other side of deck we spy the sweet American family we saw at dinner the previous night. Despite the chilly conditions almost everyone is gravitating towards the railings for views and pictures of Oban’s harbour.

Eventually the ferry begins to pull away from the pier as a health and safety announcement crackles over the PA system. With two short blasts from the ship’s horn, we are off to Mull, the second largest island of the Inner Hebrides.

In the rainy weather the area could pass for Canada’s Strait of Georgia, the stretch of sea between Vancouver Island and the British Columbian mainland. From the ship we see the other side of Kerrera and a lonely lighthouse off the island of Lismore.

Shortly before arriving in Mull we catch a glimpse of Duart Castle, the ancestral home of the Highland Clan Maclean. Shipwrecked sailors of the Spanish Armada were once kept prisoner here, and the castle bears witness to the family feuds between the Macleans, the Macdonalds of Skye and the Campbells of Argyll.

From the town of Craignure it takes about an hour and 20 minutes to cross the isle of Mull via a network of single-track roads. In the drizzle we boarded a half-empty coach and set off to the West.

Overhead the thick clouds were beginning to lift and disperse, revealing a ruggedly beautiful landscape in luscious shades of green. We passed deep, expansive valleys carpeted in grass; mountain slopes planted with majestic stands of conifers; and mussel farms where the price is an unbelievable 2 pounds per kilo. 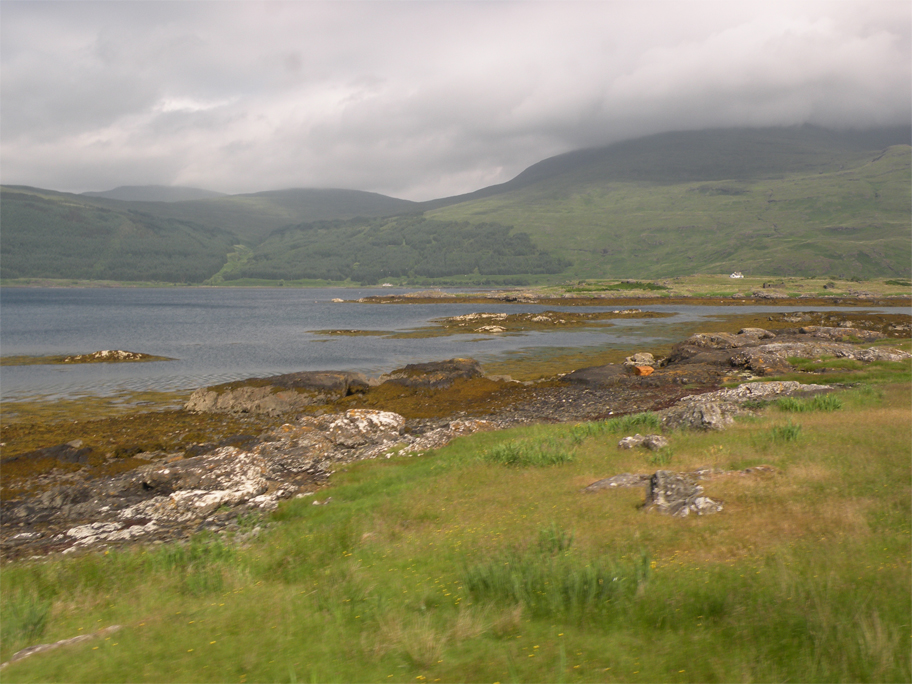 By the time we reached the ferry crossing at Fionnphort, the low rain clouds were nowhere to be seen. We stepped off the coach and were immediately awestruck. Spread out in front of us was a white sand beach and what looked like a tropical blue sea, studded with small boats and granite outcrops.

In the distance we could see Iona gleaming in the midday sun, its gentle profile seemingly embracing the blue horizon. With its sparse, windswept appearance, the island looked every bit the secluded retreat we had imagined it to be. 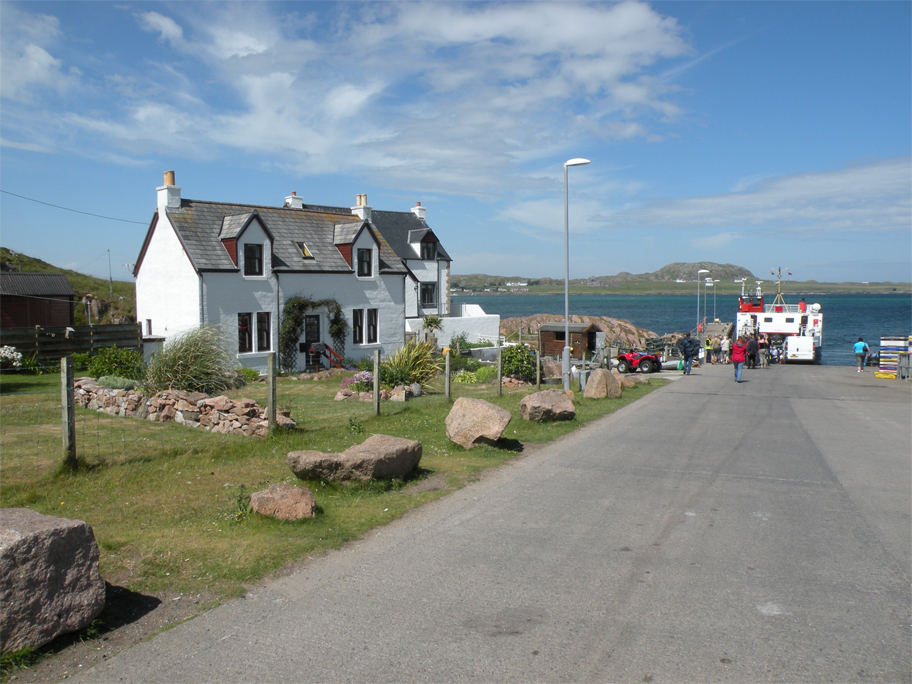 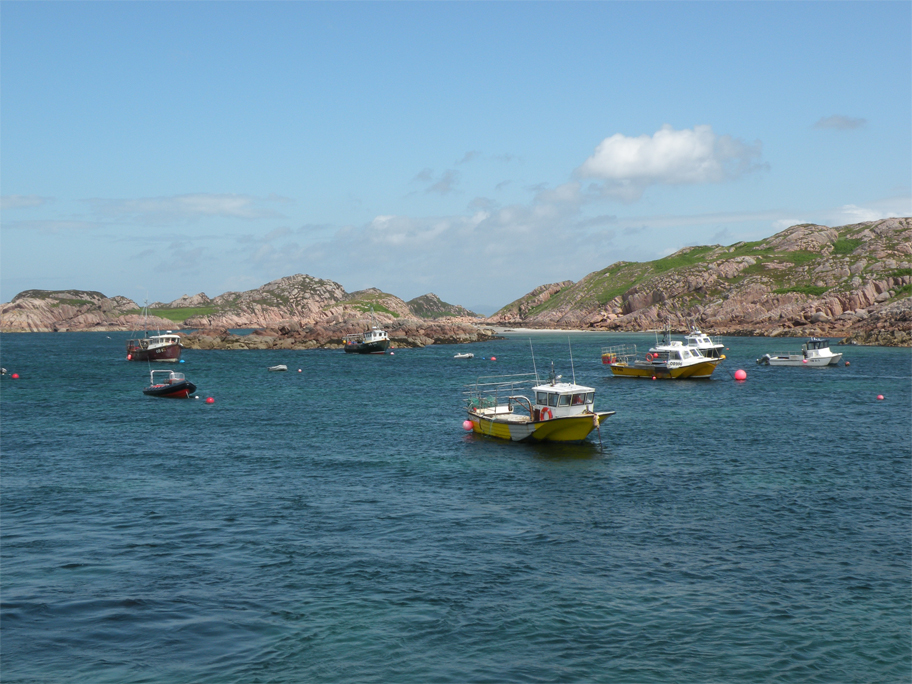 Iona first came to prominence as a centre of Celtic Christianity in the late 6th century AD. A monastery was established here by the Irish missionary Saint Columba, who used the island as a base for the conversion of both Scotland and Northern England. As Iona’s reputation spread throughout Europe, it became a holy island and a major site of pilgrimage.

It is believed that the Book of Kells, that most famous book of illuminated manuscripts, was written on the island at the end of the 8th century to commemorate the bicentenary of Columba’s death in 597. Iona also holds the distinction of being the final resting place for 48 Scottish, 8 Norwegian and 4 Irish kings, although none of these graves can be identified after many centuries of weathering. 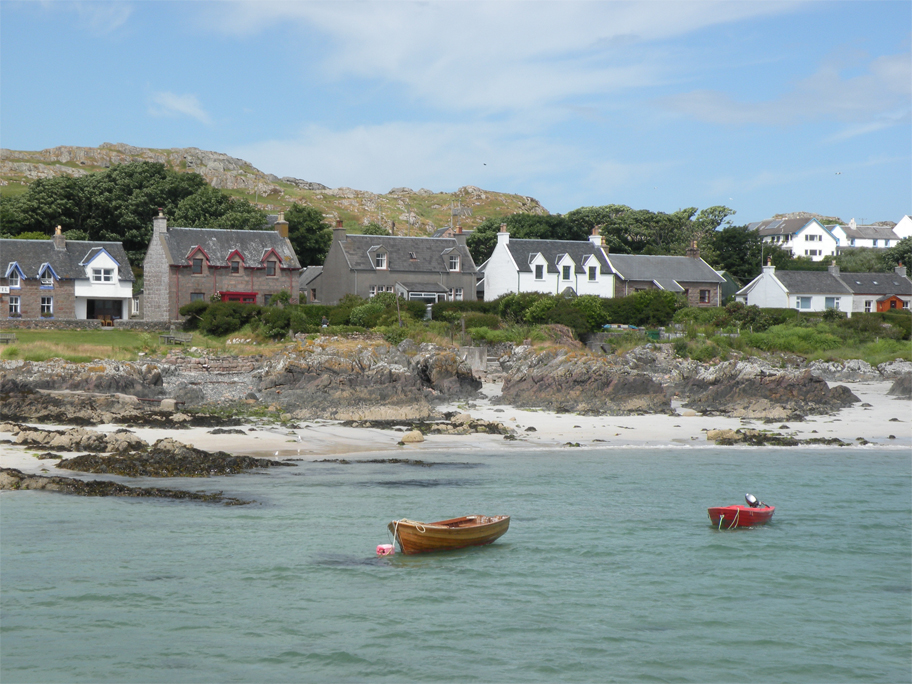 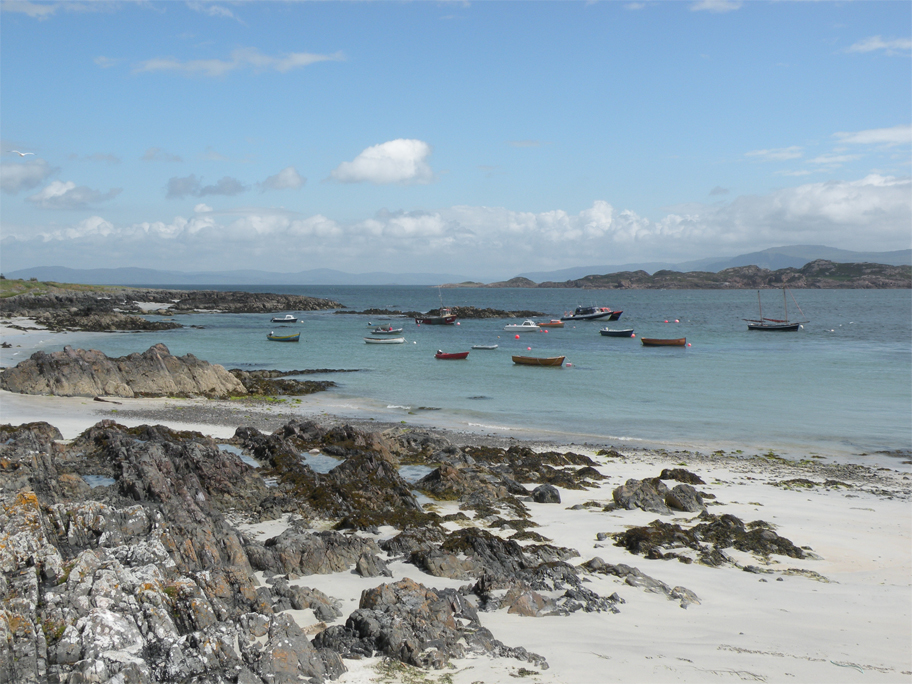 Our first stop after disembarking from the ferry was the ruins of the medieval nunnery, which was in use between 1208 and the 16th-century Scottish Reformation. Standing adjacent to the island’s main settlement, Baile Mor, it is a beautiful composition in grey and pink stone. The peaceful, well-maintained gardens are definitely worth a stroll as they provide the best way to view the ruins. 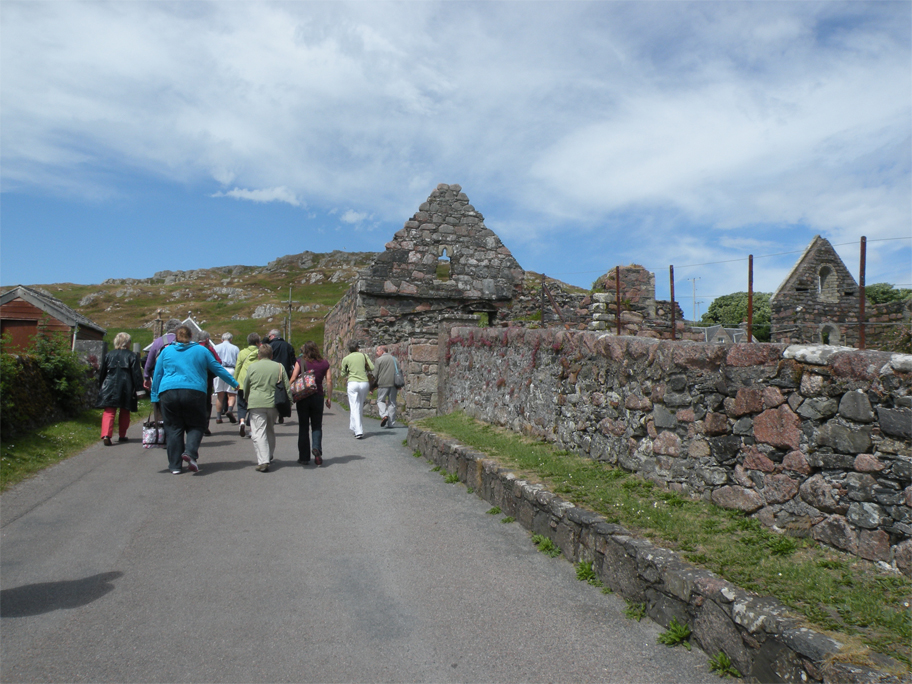 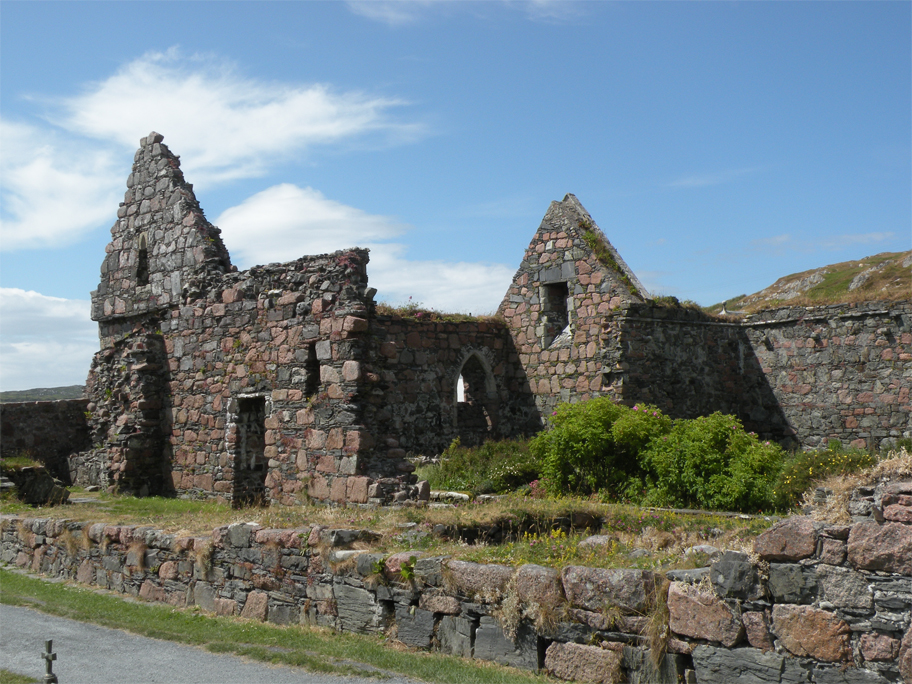 Without a doubt, the main draw on Iona is the famous Abbey, which has been restored in stages since 1899 after falling into ruin in the aftermath of the Reformation. Set in a great grassy field, with the sea and the Isle of Mull to its back, the Abbey evokes a real sense of seclusion.

Two high crosses at the entrance – St Martin’s and St John’s – attest to Iona’s status as a holy place. Slender St Martin’s was carved between 750 and 800 from a single slab of stone, whereas St John’s is a faithful replica of the 9th-century original, which is kept in the Abbey’s infirmary museum. 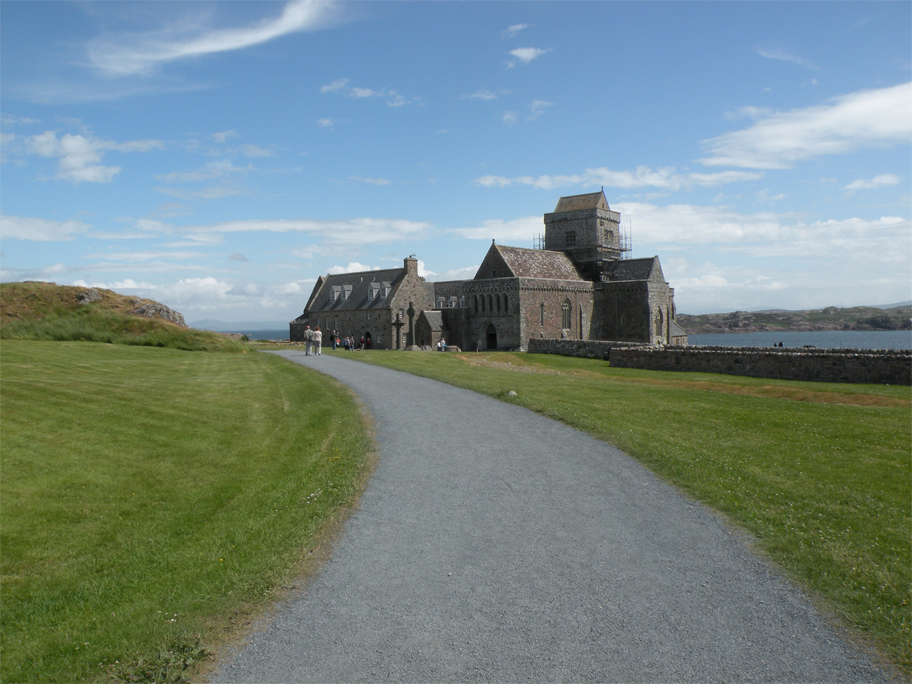 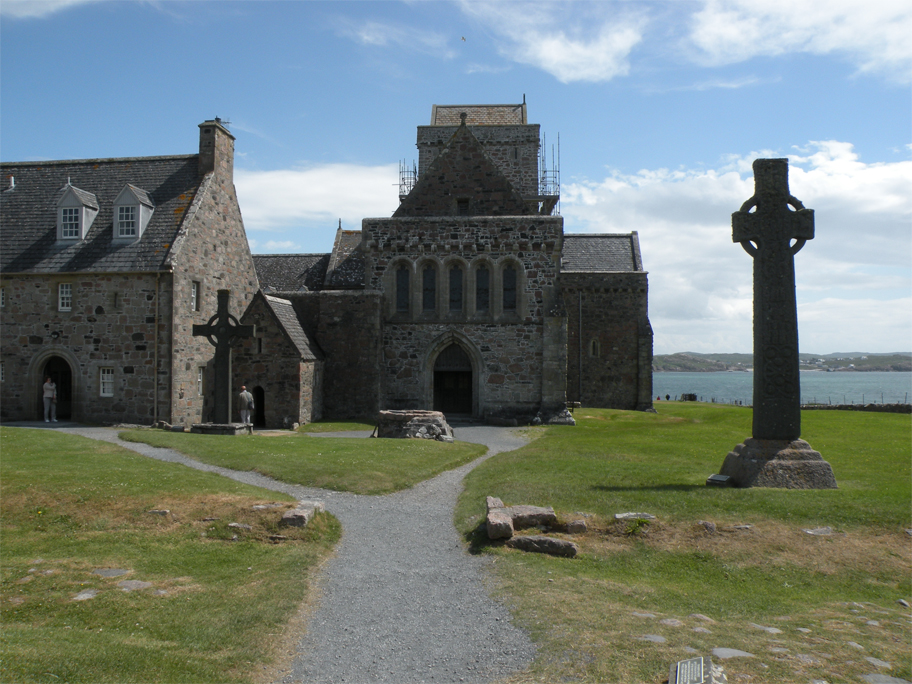 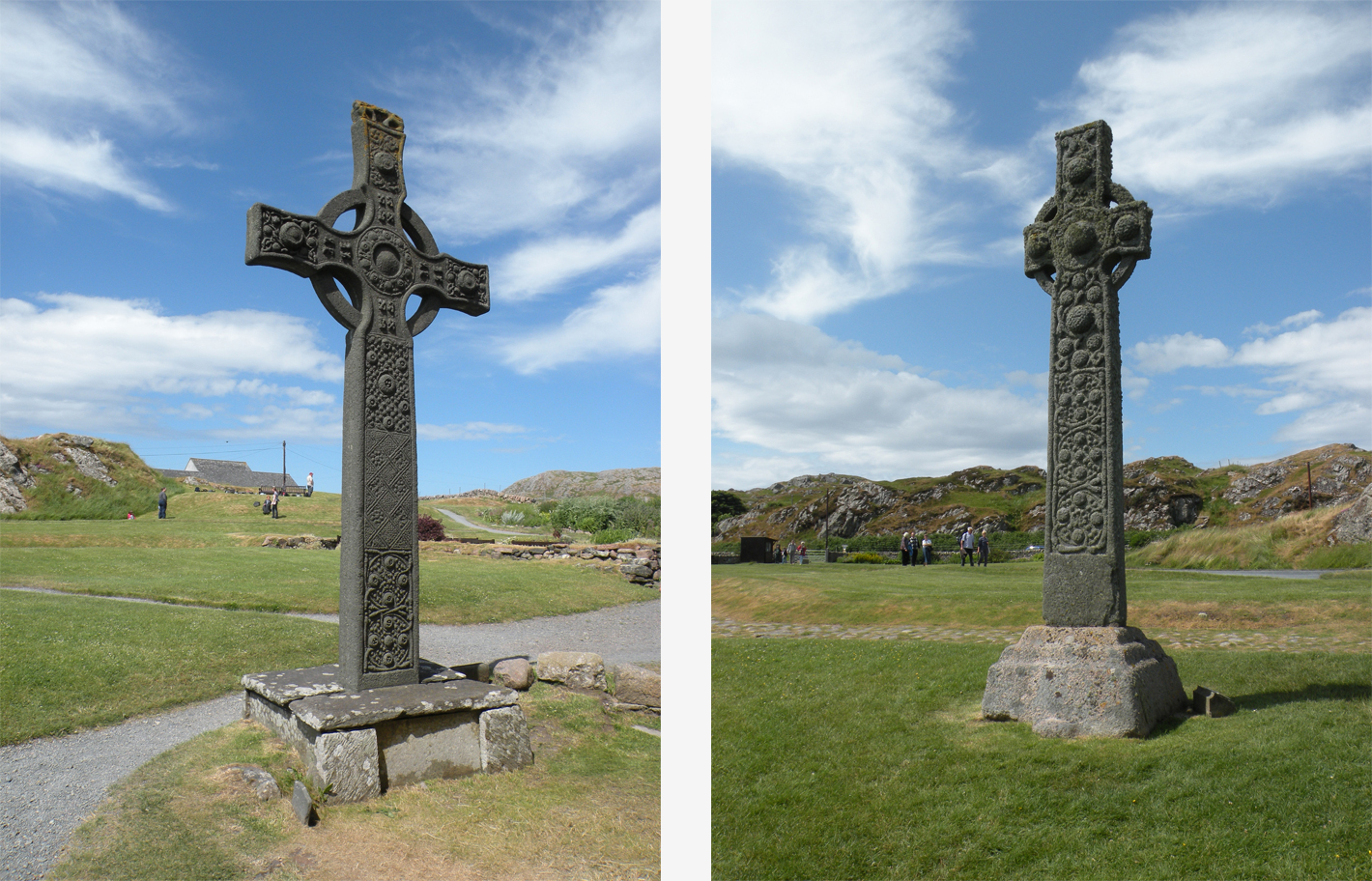 Walking through the main entrance takes us straight to the Abbey cloisters, which have been beautifully restored. I pause for a few snaps before entering the cozy Abbey church. Surrounded by thick walls of stone and sheltered by a wooden roof, I felt enormously safe and secure.

The next half an hour or so is spent waiting outside the souvenir shop for my mother, who has decided to go on a gift-shopping spree to buy books, chocolates, and little trinkets for everyone back home.

I had read about some beautiful beaches on the island’s western shores, but with the clocks ticking away I am beginning to wonder if we will even get the chance to see them. Our ferry is at 3:00pm but it is already past two o’clock. 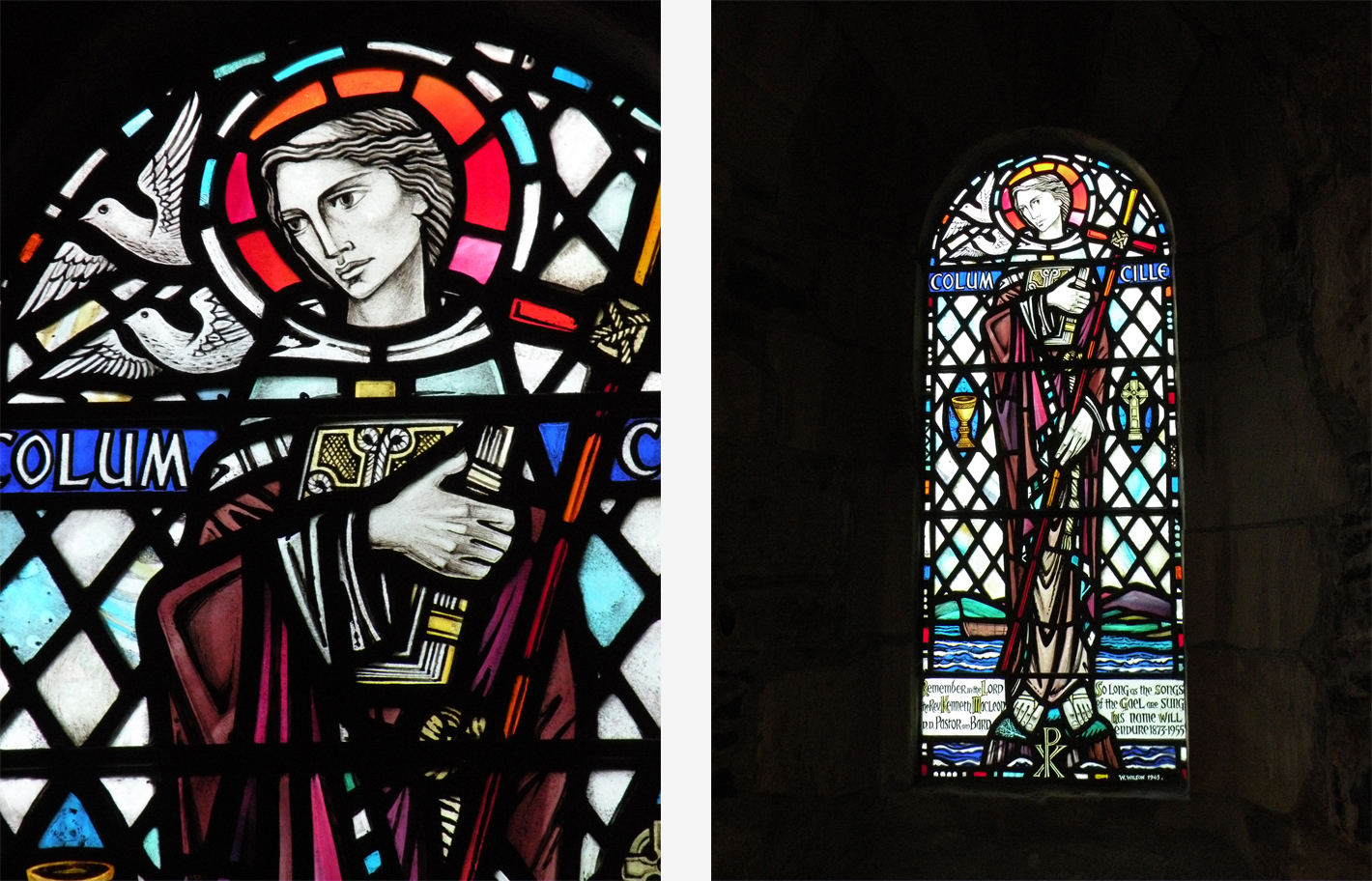 By now it is clear that there is no time to visit the western shore – instead the souvenir shop staff direct us to another beach just 15-20 minutes away. A lonely road leads us to the northern reaches of the island, past bleeping sheep herds and the occasional highland cow. Eventually we find ourselves in an expansive field, dodging the countless sheep droppings until we see a glint of sand in the distance. 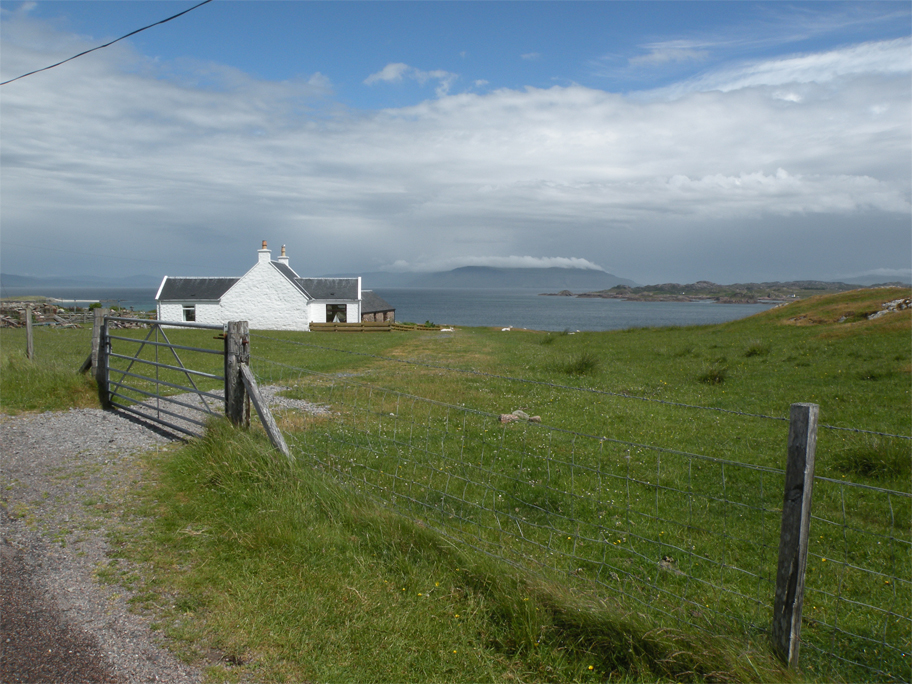 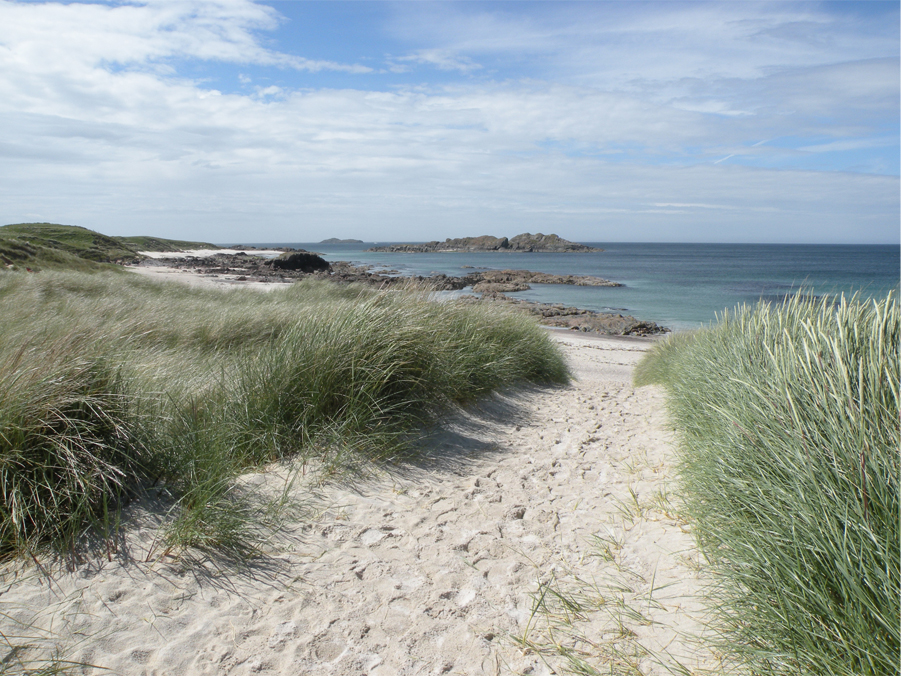 I cannot believe what I am seeing. Spread out in front of me is a picture-perfect white sand beach, with a vivid blue sea lapping at its feet. For a few minutes we have the entire beach to ourselves, and I stand motionless on the edge of the surf, contemplating the sound of waves and the gentle ocean breeze. 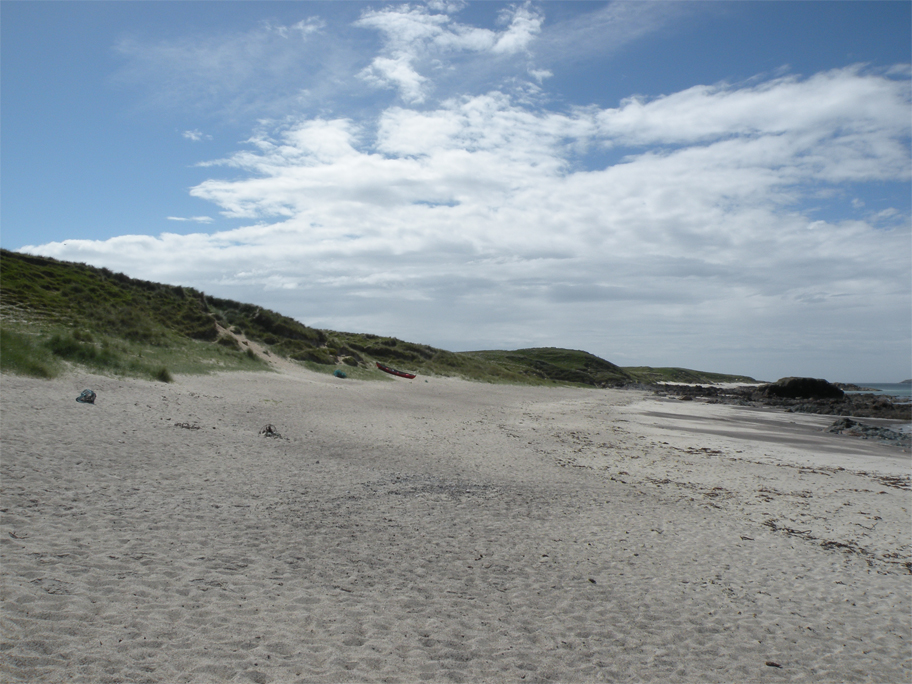 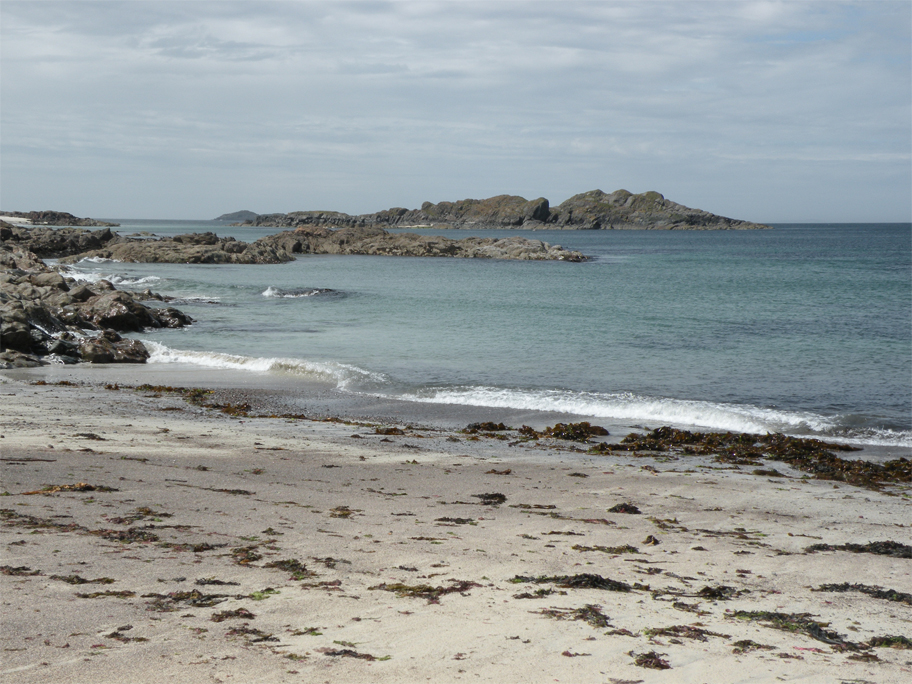 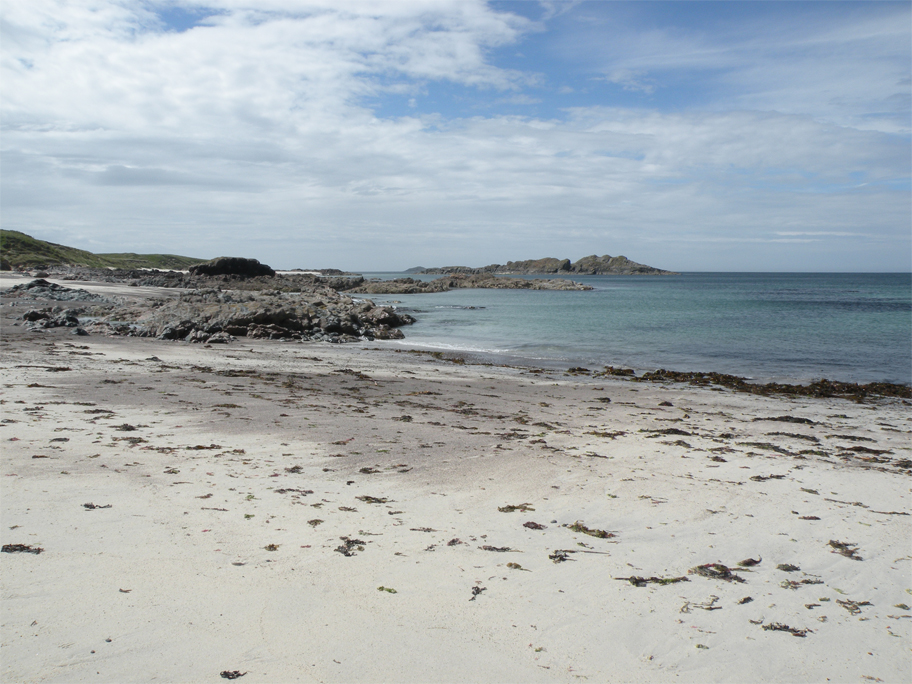 In the end it took me less than 2½ hours to fall in love with Iona. Perhaps it was the allure of its semi-desert island existence, or maybe it was the powerful combination of a rich spiritual history with immense natural beauty. Nevertheless, one thing was for certain – on this remote island in the Western Highlands, I had found myself a little corner of paradise.

Tags: Iona, Mull, Scotland, Travel
From: United Kingdom
← A Little Slice of New Zealand – Oban, Scotland.
A View from the Top – Edinburgh, Scotland. →
No comments yet