A View from the Top – Edinburgh, Scotland.

After the tranquility of Oban and the Western Isles, Edinburgh seemed like a world away in comparison. Scotland’s pulsating capital is often regarded as one of Europe’s most beautiful cities, so it comes as no surprise that it is such a major tourist draw.

On the Royal Mile – the city’s historic main street – a vast array of souvenir shops vie for our attention, blaring bagpipe music and selling all manner of tartans, little miniatures and the usual tourist T-shirts. It’s a reminder that Edinburgh is the UK’s second most visited destination after London, attracting more than 1 million overseas visitors per year. 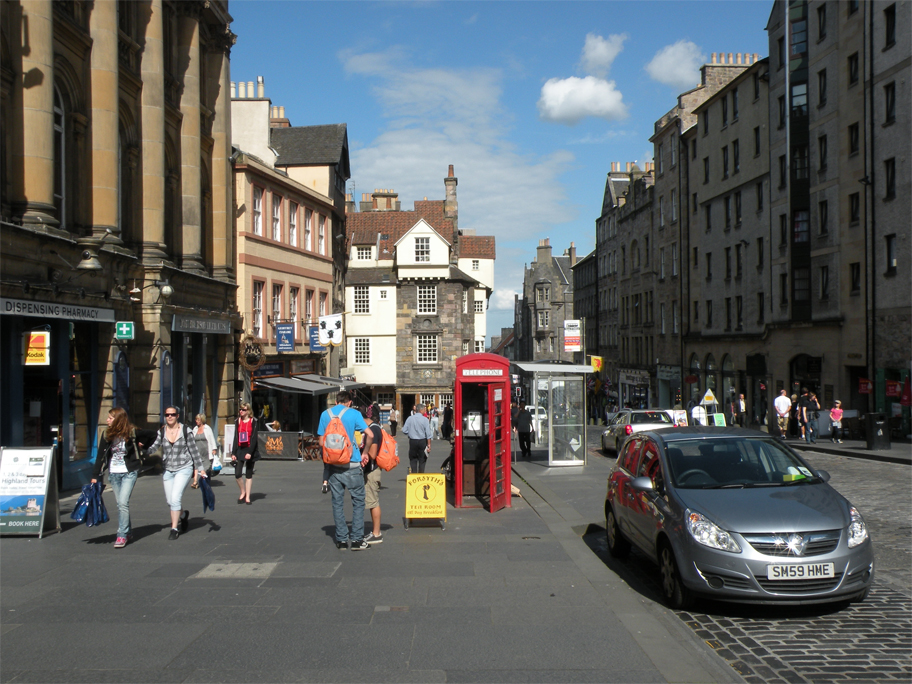 At once both earthy and full of high culture, Edinburgh is a real feast for the senses. Famous for its annual August festivals – a vast collective of fringe performances, contemporary art events, classical theatre and jazz and blues (just to name a few) – this proud capital was recently voted the UK’s most desirable city in which to live, beating off English rivals York, London, Cambridge and Bath.

Apart from oodles of history, great museums and beautiful architecture, Edinburgh also has a wealth of green spaces that are both tranquil and easily accessible. 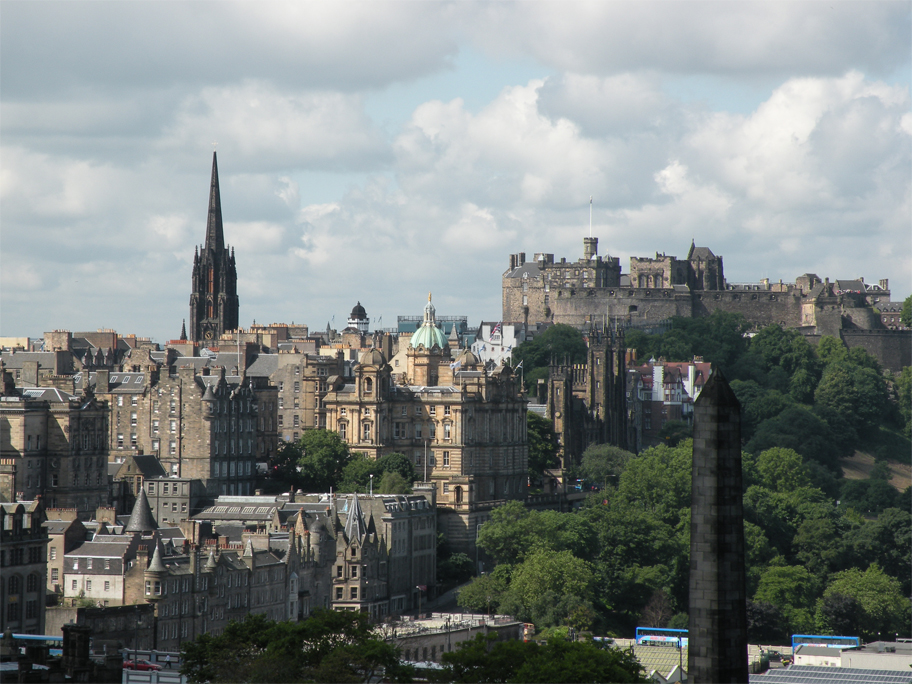 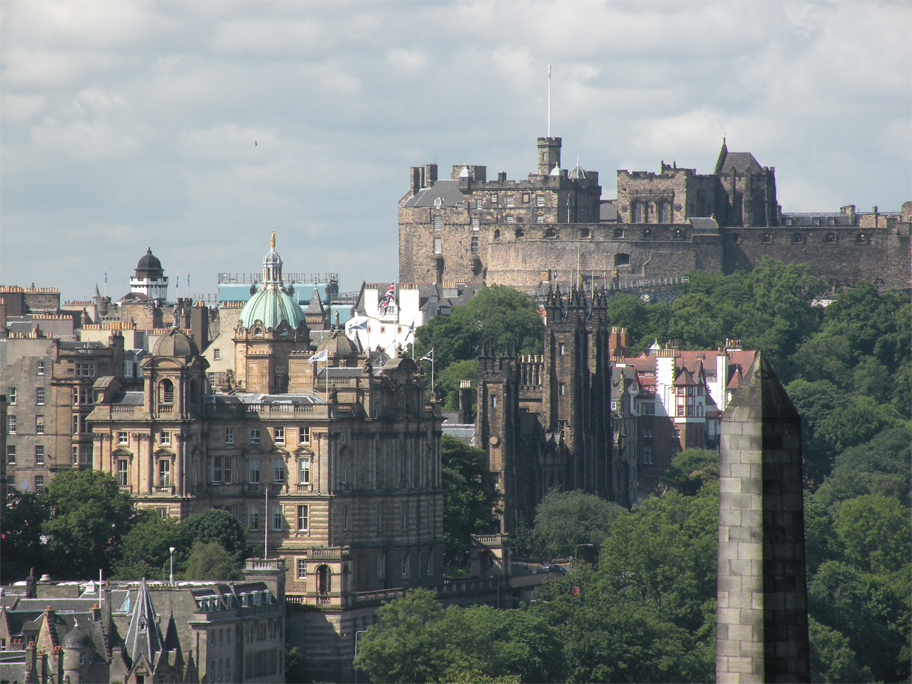 As we discovered firsthand, one of the best ways to see the city is to clamber up some of the hills dotted around the centre. An easy climb from Princes Street will take you to the top of enigmatic Calton Hill, home to the city observatory and an unusual collection of civic monuments.

Perhaps the most well-known of them all is the unfinished Scottish National Monument, which was originally designed to be a replica of the Greek Parthenon. Begun in 1826, it was built to commemorate the Scottish soldiers who fell in the Napoleonic Wars. Construction was halted just three years later when funds ran out, and soon the unfinished hulk came to be nicknamed Edinburgh’s Disgrace and Edinburgh’s Folly. 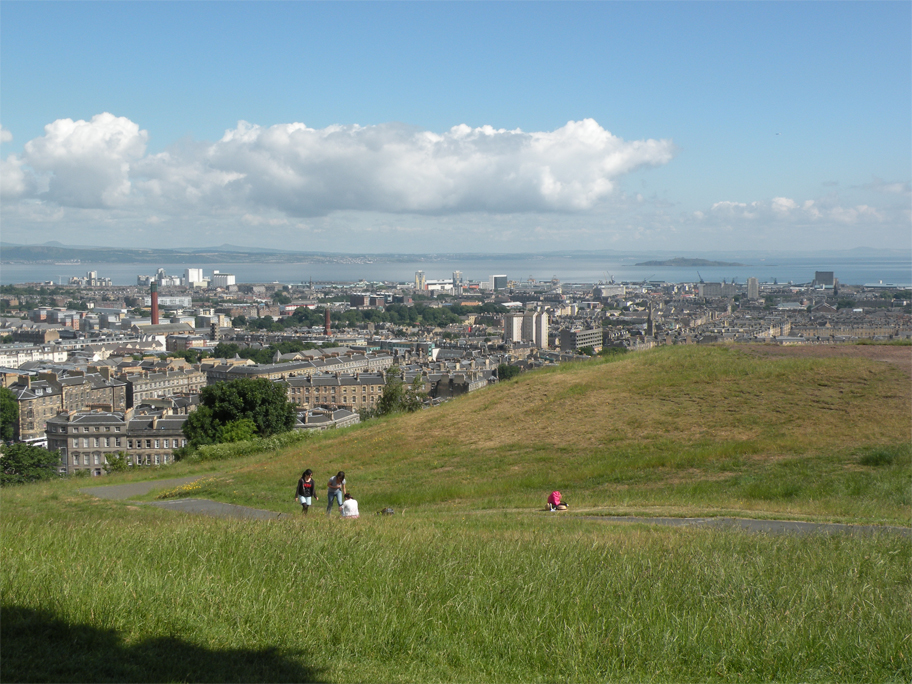 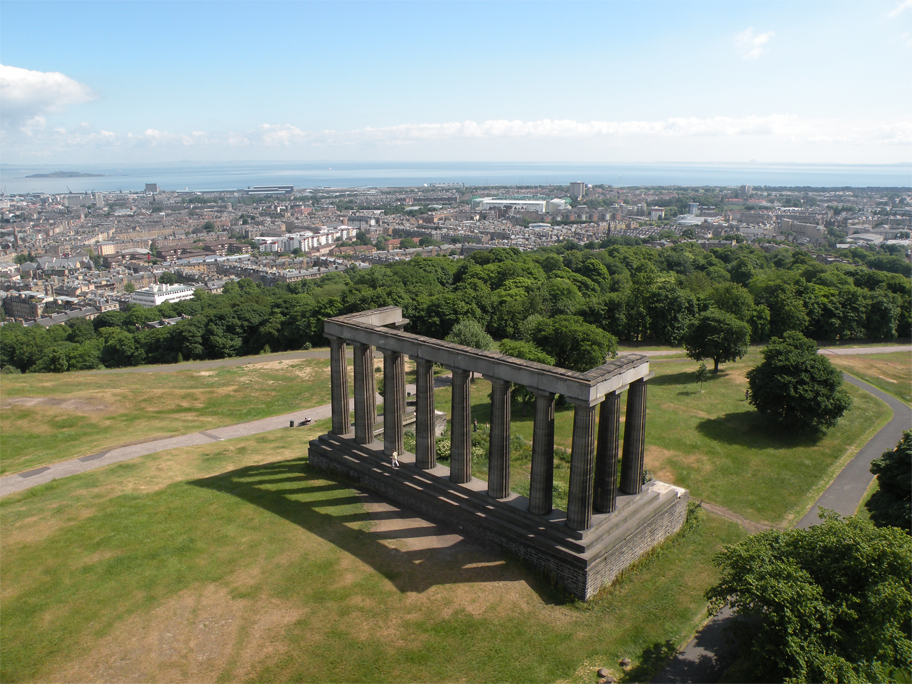 For postcard-perfect views of the Old Town and castle, it’s worth climbing the 143 steps up to the top of Nelson’s Monument. Situated on the highest point of Calton Hill, it is shaped like an enormous upturned telescope – a direct reference to the victory at the Battle of Trafalgar.

From the tower, it is evident that Edinburgh is deeply tied to its rugged, spectacular setting. With an old volcanic plug – Castle Rock – as its starting point, the city grew up on an easily defensible ridge running down from the hilltop fortress. It was only during the Enlightenment when the city made the leap across the natural depression formed by Nor Loch, now drained and occupied by the main railway station.

To the southeast, the Palace of Holyroodhouse – the Queen’s official Scottish residence – lies in the shadow of Arthur’s Seat, a majestic peak which evokes the raw beauty of the Highlands. Also visible is the new Scottish Parliament with its beautifully understated leaf forms. 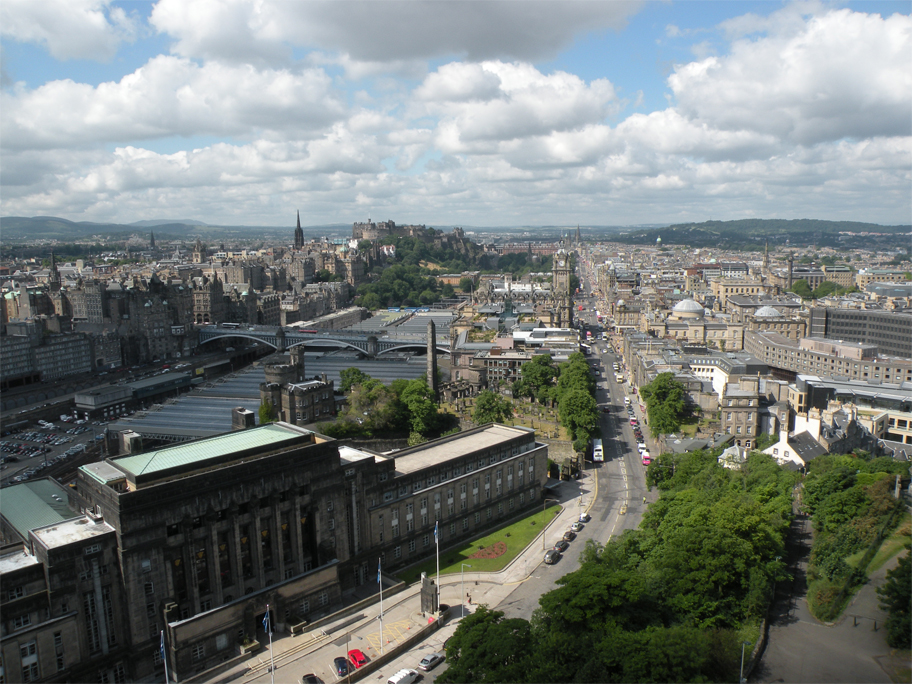 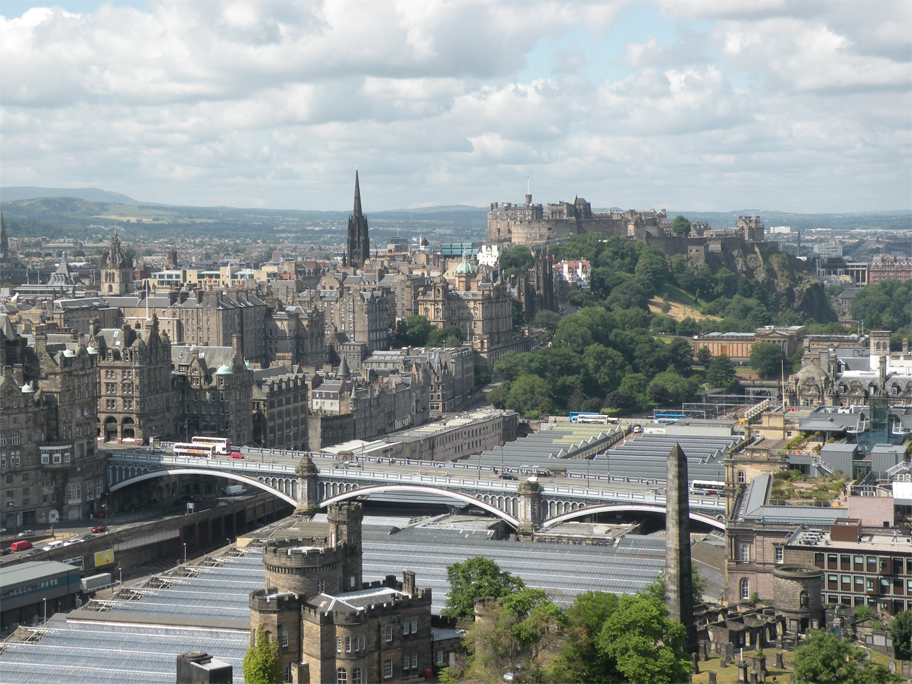 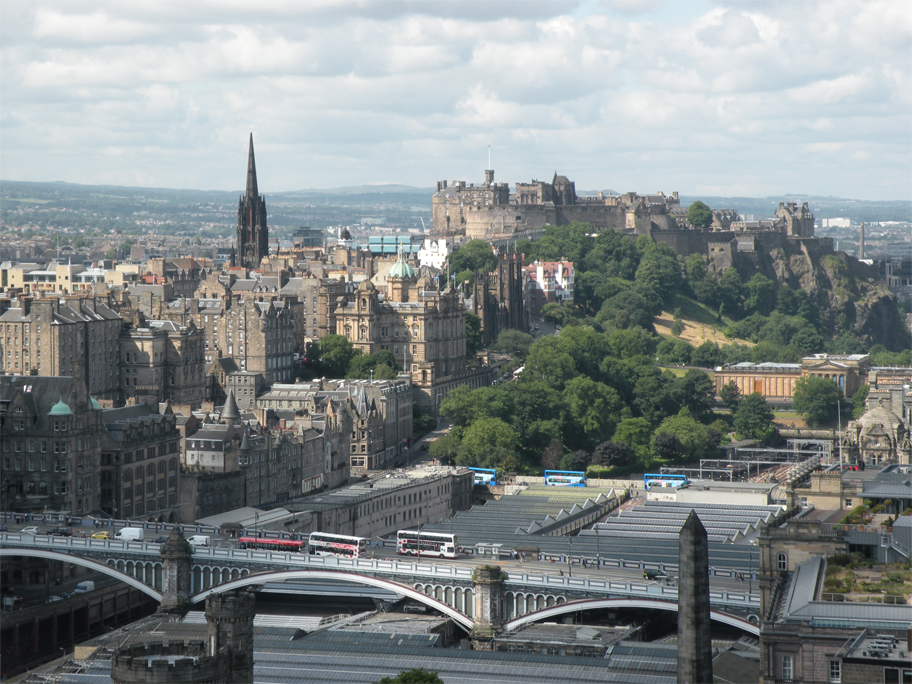 We spend the midday hours wandering the streets of the New Town, one of the world’s finest examples of Georgian town planning. Laid out in the 18th century to relieve the city’s cramped conditions, it boasts a series of beautiful squares and wide, gridded streets lined with elegant townhouses.

The New Town may be rigidly planned, but it has its fair share of surprises for the curious visitor. Tucked away behind the big department stores of Princes Street is a picturesque back lane with a wealth of pubs and restaurants. Halfway along this street, we suddenly emerge into a spacious cobbled thoroughfare that could easily pass for Old Montréal or Quebec City. Given Canada’s long-standing links with Scotland, perhaps it should even be foreseeable to spot some similarities every now and again. 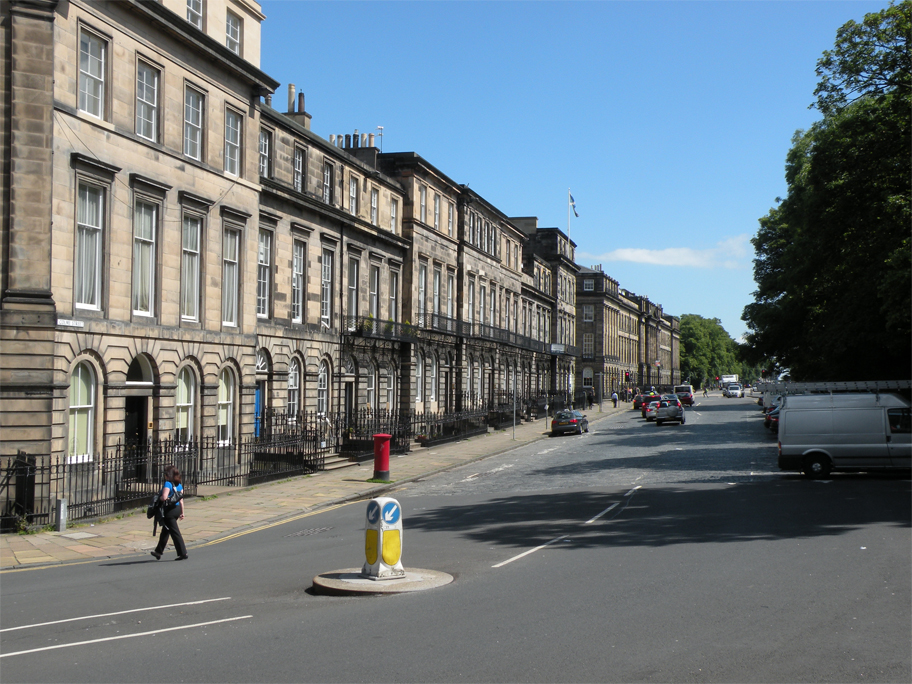 After a satisfying seafood lunch and some welcome rest for our legs, it is time to head back into the Old Town to check out the sights along the Royal Mile.

At its midpoint stands St Giles’ Cathedral, where Protestant preacher John Knox led the Scottish Reformation. Topped with a distinctive crown steeple, a trademark of medieval Scottish architecture, the church has served as Edinburgh’s chief religious focal point for more than 800 years. 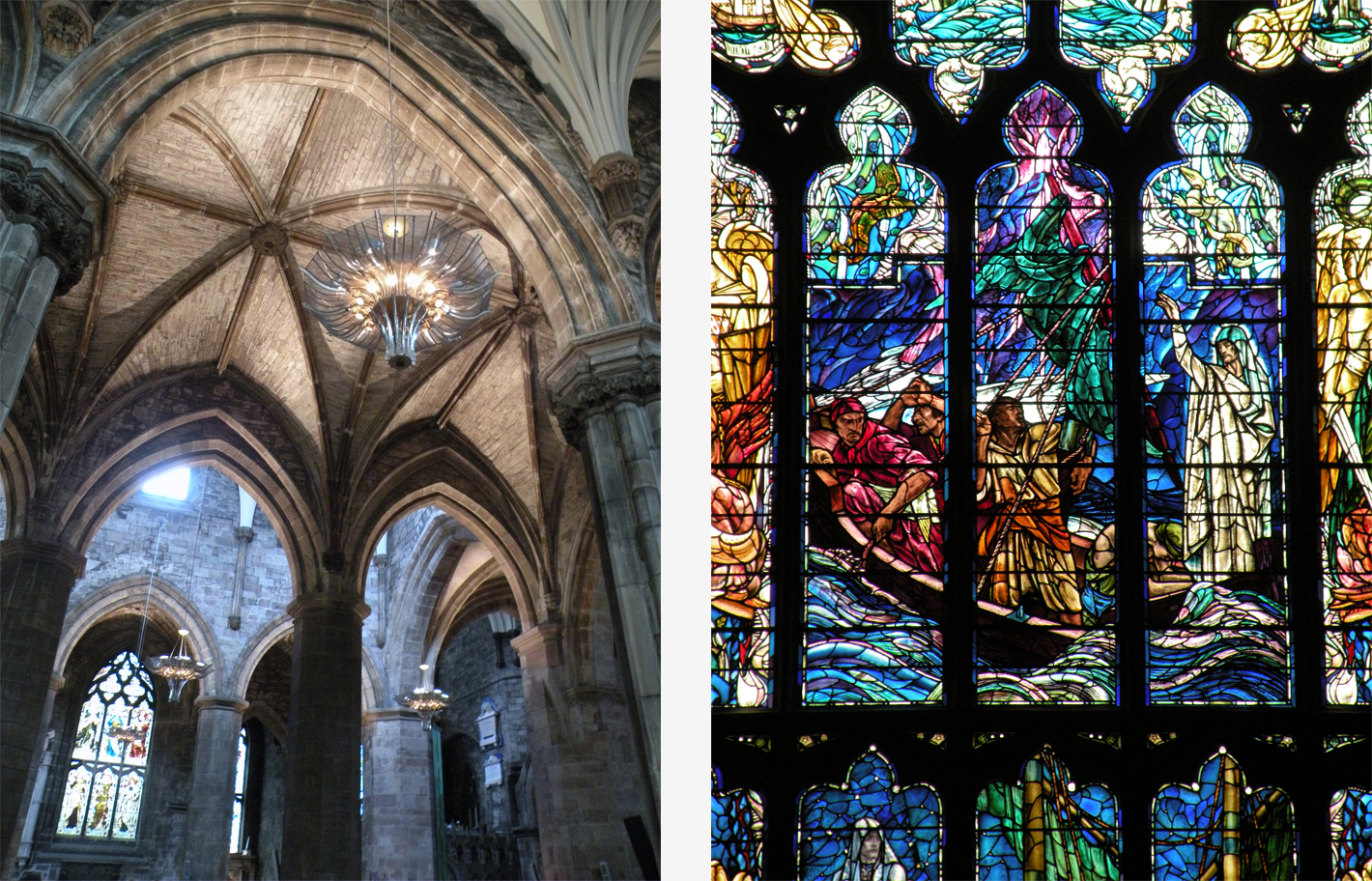 Inside the ceiling is painted in the Scottish colours, and the cavernous stone structure evokes the coolness of a mountain cave. The cathedral is a peaceful oasis in the midst of the thronging crowds, so take your time, soak up some history and admire the incredible stained glass around you.

Not to be missed is the spectacular Thistle Chapel, an early 20th-century addition dedicated to Scotland’s foremost Order of Chivalry – The Most Ancient and Most Noble Order of the Thistle. It is a soaring yet intimate space, with a beautiful vaulted ceiling and the most exquisitely carved woodwork. 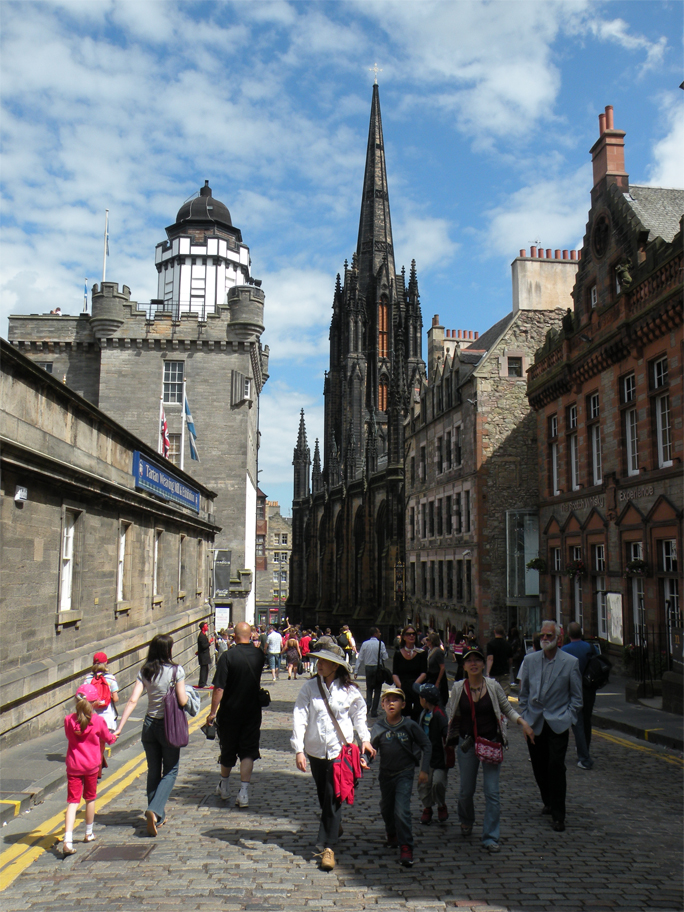 Marking the western end of the Royal Mile, Edinburgh Castle sits proudly on a pedestal of tough volcanic rock. Without doubt the city’s number one tourist attraction, its overwhelming popularity is matched by the price of its admission tickets. But maybe £14.00 is not too much to ask for when you consider what you can see within its protective walls.

The climb from the gatehouse to the castle’s upper ward is an experience in itself, with winding ramps, plenty of cannon and unfolding views at every turn. 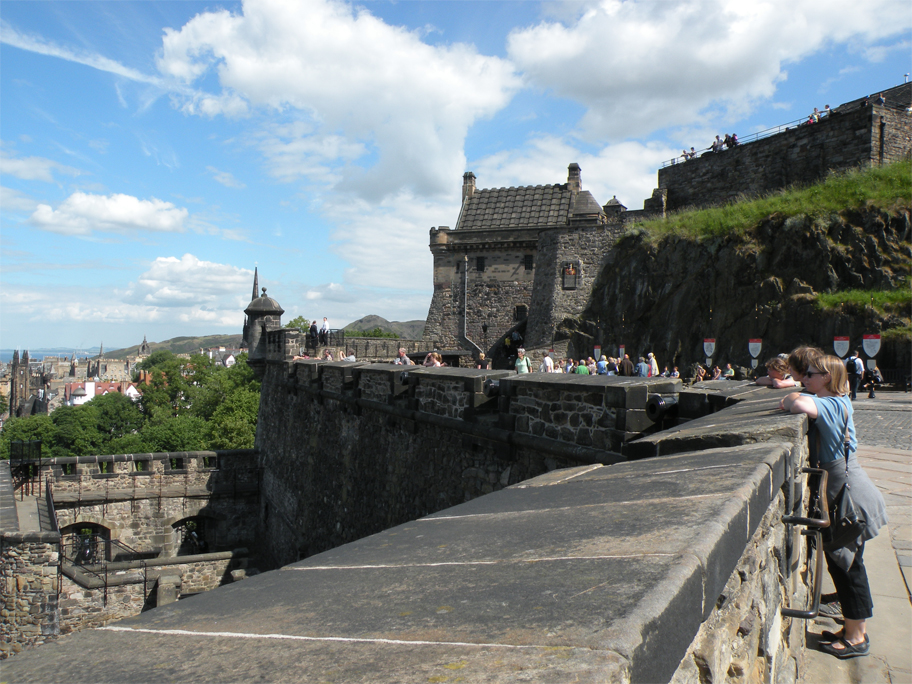 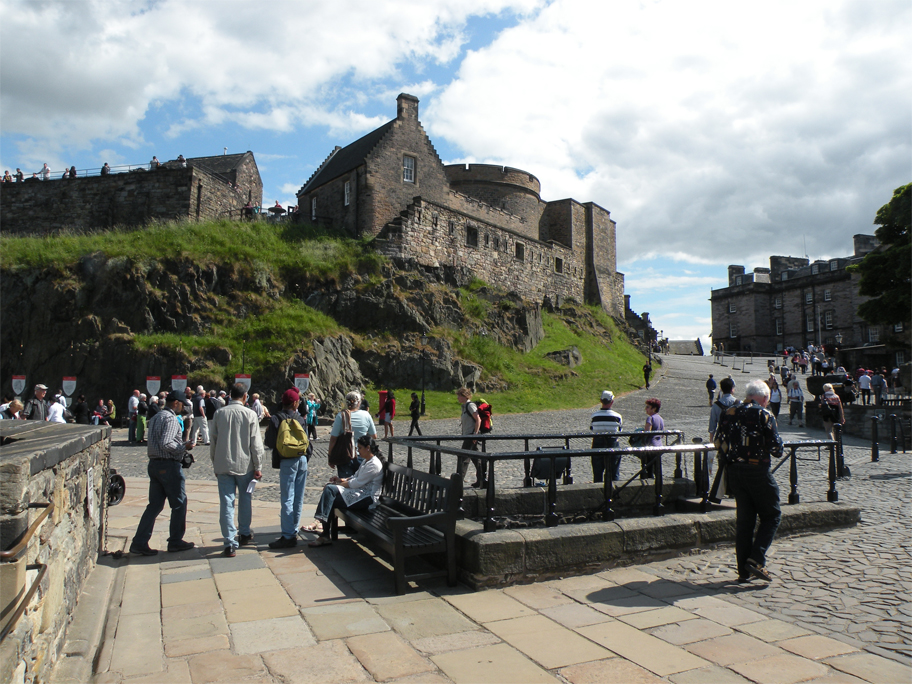 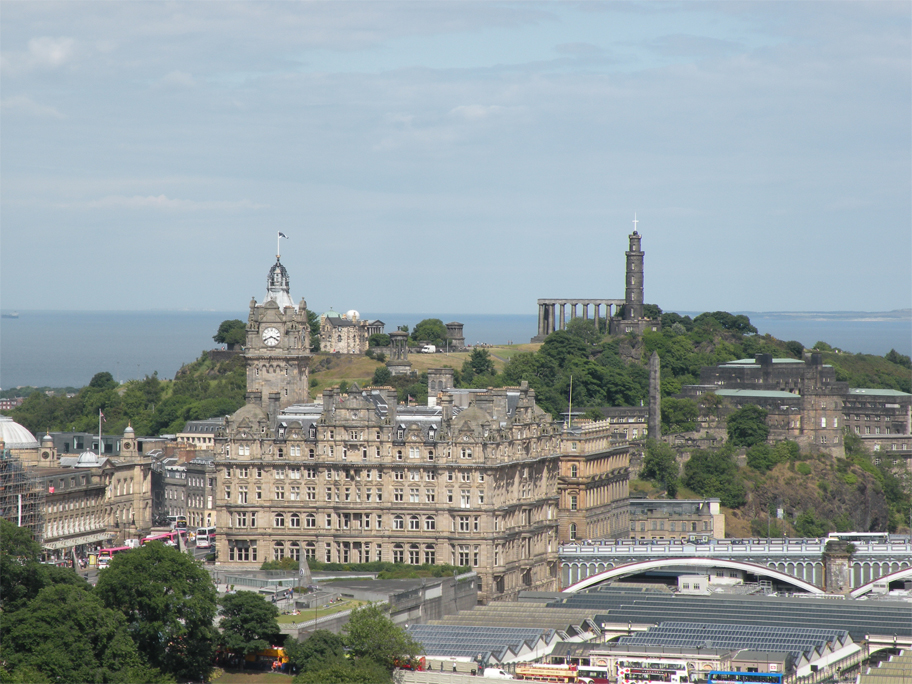 After taking some snaps, most visitors to the castle make a beeline for the Royal Palace, which contains the state apartments where the Stewart monarchs once lived. Inside, you can visit the Birth Chamber or Mary Room, where Mary, Queen of Scots gave birth to King James VI in 1566.

When you are there make sure you don’t miss the Crown Room – as its name suggests, it holds the original 16th-century Scottish Crown Jewels. Unlike the English ones housed in the Tower of London, these jewels managed to escape destruction by Oliver Cromwell following the outcome of the English Civil War.

Next door, the Great Hall is an understated blend of delicate paneling, cheery red walls and a rustic wooden ceiling. Apart from Edinburgh Castle, only one other medieval hall in Scotland has retained its original hammerbeam roof.

Directly across Crown Square is the Scottish National War Memorial, a sort of monumental chapel dedicated to Scottish soldiers killed during the two World Wars. Perhaps it is fitting that the memorial is located where it is – the building itself is a converted barracks block erected on the site of an old medieval church.

Continuing with the war theme (the entirety of the castle is still owned by the Ministry of Defence), you can also visit the National War Museum of Scotland, which occupies a building in the middle ward.

As for my mother and I, we elect to spend the remainder of the afternoon outside, taking in the remarkable view from the castle battlements. 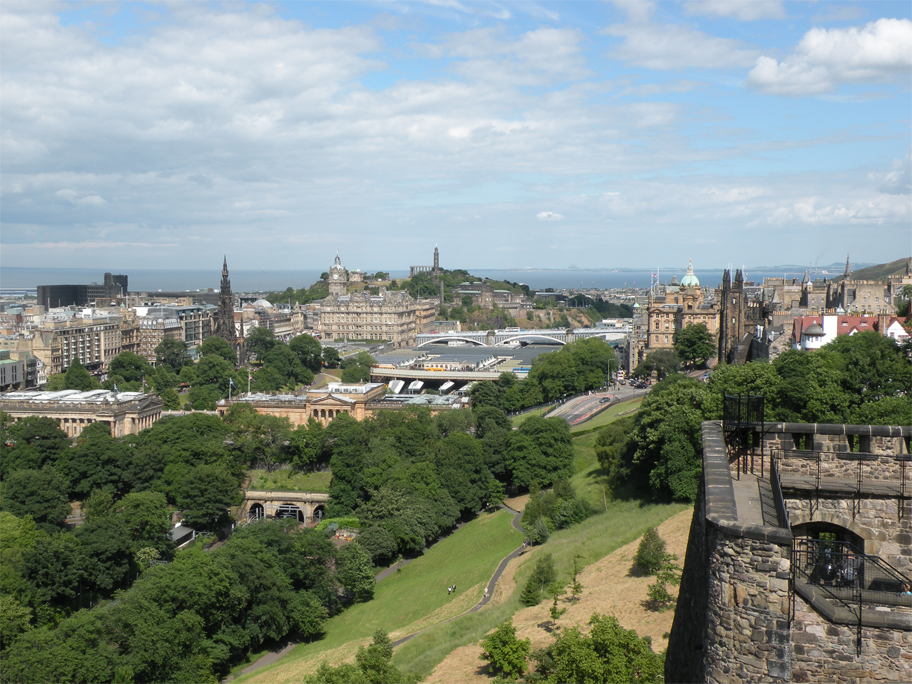 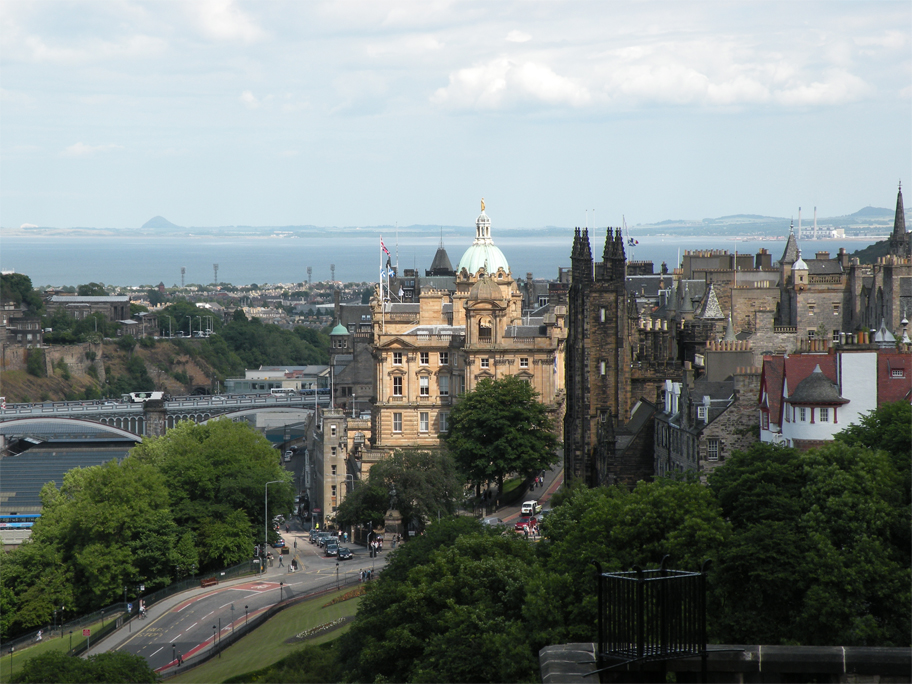 Robert Louis Stevenson, the author of Treasure Island, once called Edinburgh ‘a dream in masonry and living rock’. Scanning the horizon, I could finally understand what he meant. Edinburgh’s living history is hewn in the ruggedness of its landscape, the turreted nature of its skyline and the beautiful sandstone of its buildings and monuments. This city was clearly an architect’s dream, and I was not about to let myself wake up.