At the Walls of Ávila, Spain.

The Spanish call it the “City of Song and Saints”. Situated in the wilds of Castilla y León, and within easy reach of Madrid, the historic town of Ávila is a prime destination for a weekend day trip. Recently a friend of mine described it as a miniature version of Carcassonne – that legendary walled city in the south of France – and within 30 seconds I was sold.

And so it was on a sunny Saturday afternoon that I headed off on the 1 hour train ride towards Ávila, with my camera and my housemate Fred in tow. When we arrived it was nearing the end of siesta time, and by all appearances the town was virtually empty. It was a dramatic change from the relative vibrancy of Salamanca.

Eventually the narrow street in front of us opened out into a massive square, with a monumental gateway – the Puerta del Alcázar – looming in the distance. We had arrived at Plaza de Santa Teresa, the civic heart of Ávila. At its centre stood a statue commemorating the city’s most famous historical figure: Santa Teresa de Jesús. Known in the English-speaking world as St. Teresa of Ávila, she was a prominent Spanish mystic and theologian of the 16th century.

Well known for the study of mental prayer and her experiences of spiritual ecstasy, St. Teresa was also a leading author of religious prose during the Spanish Golden Age. Her autobiography, the Life of Teresa of Jesus, and her two most defining works, The Interior Castle and The Way of Perfection, have formed a legacy that transcends both language and the boundaries of continents. 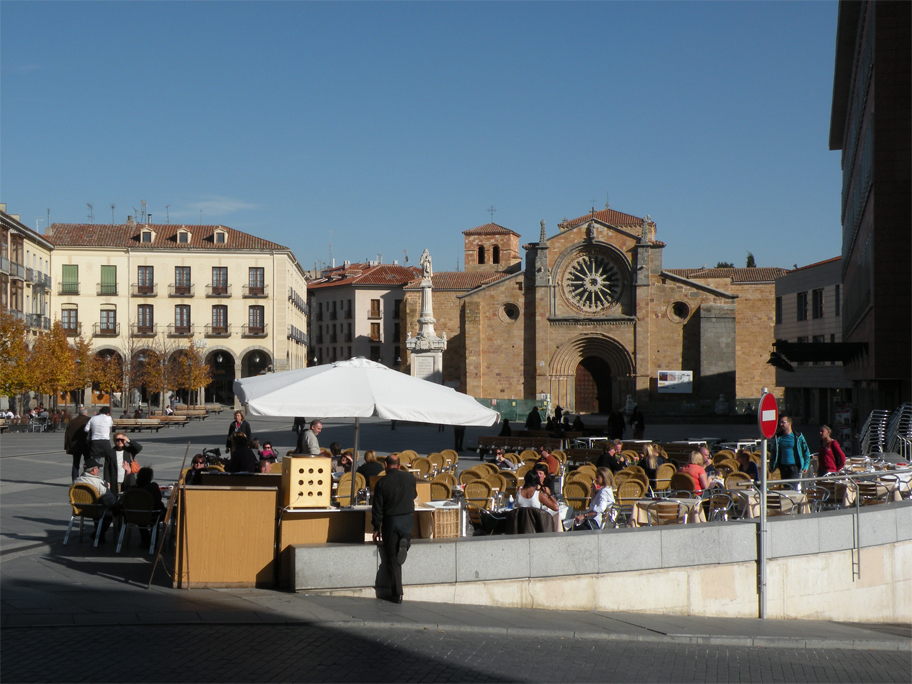 Just next door to the Puerta del Alcázar – alongside a sign proclaiming Ávila’s status as a UNESCO World Heritage Site – we stumbled across yet another statue of Saint Teresa, this time with a large cluster of floral offerings at its base. Behind her stood a sort of “flower tapestry”: a temporary tribute to her deep relationship with the city. Perhaps it should come as no surprise that she is so well-loved here; after all, this is her hometown and she is the patron saint of headaches, sickness and parental loss.

From the statue, we looked back towards the main gate and let our eyes follow the undulating forms of the city wall. It was truly breathtaking to see tower after tower unfolding into the distance, especially with a monument of this scale. 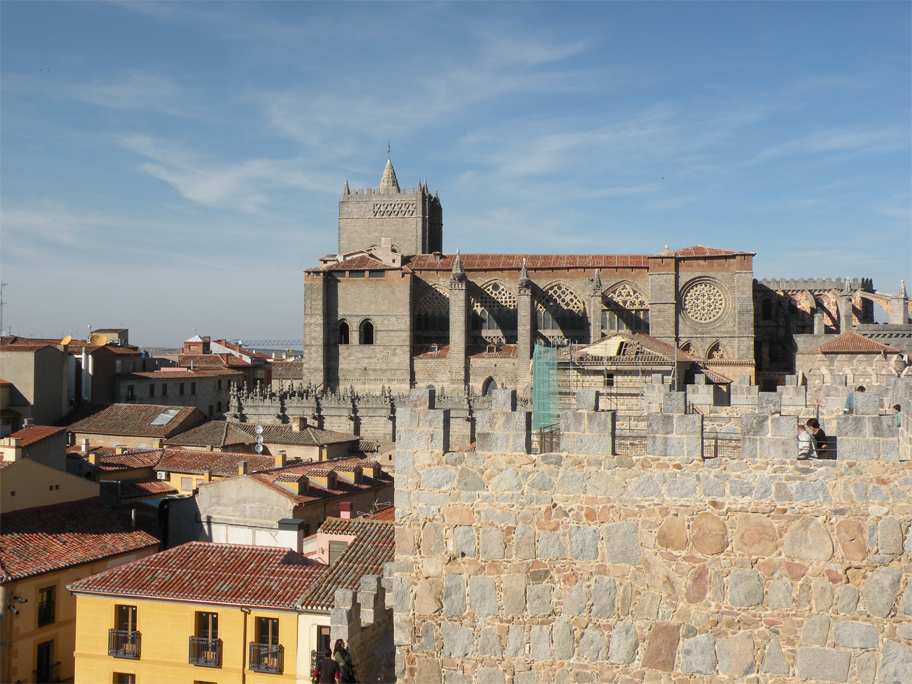 Begun in 1090, after the Christian reconquest of the town (by Alfonso VI), these medieval walls are some of the best preserved in Europe. Boasting 88 towers, 9 gates and sections 3 metres thick, the fortifications enclose 31 hectares of the old city. At night it becomes the largest floodlit monument in the world.

For less than 3 euro Fred and I clambered up to the top, where we enjoyed some amazing views over the surrounding area. From this vantage point it became clear that Ávila was built to be easily defended – the old town occupies the summit of a rocky hill which drops away in some places.

It’s possible to walk a good portion of the walls, but these are divided into 2 sections: one stretches around the Puerta de Alcázar and the other is accessed from the gate just beyond the cathedral. Nobody knows the exact date of its construction, but it is certain that this was the first Gothic cathedral in all of Spain. The structure was deliberately planned as a church-fortress, with the apse acting as an imposing bastion on the city wall.

Far from being an open-air museum, Ávila is very much a living and breathing town. People still live and work within the walls and this became evident as we walked along its perimeter. One thing I really love about Ávila is the fact that there are no pretences – it does not try to hide the fact that it is a working city, with cranes and all.

In the late afternoon sun we had much of the wall to ourselves. There was the occasional visitor and the odd Spanish family, but otherwise it was a relaxing stroll above the tiled roofs of the old town. After spending much of the previous night in smoky bars and clubs, the soothing freshness of the mountain air was a definite treat. 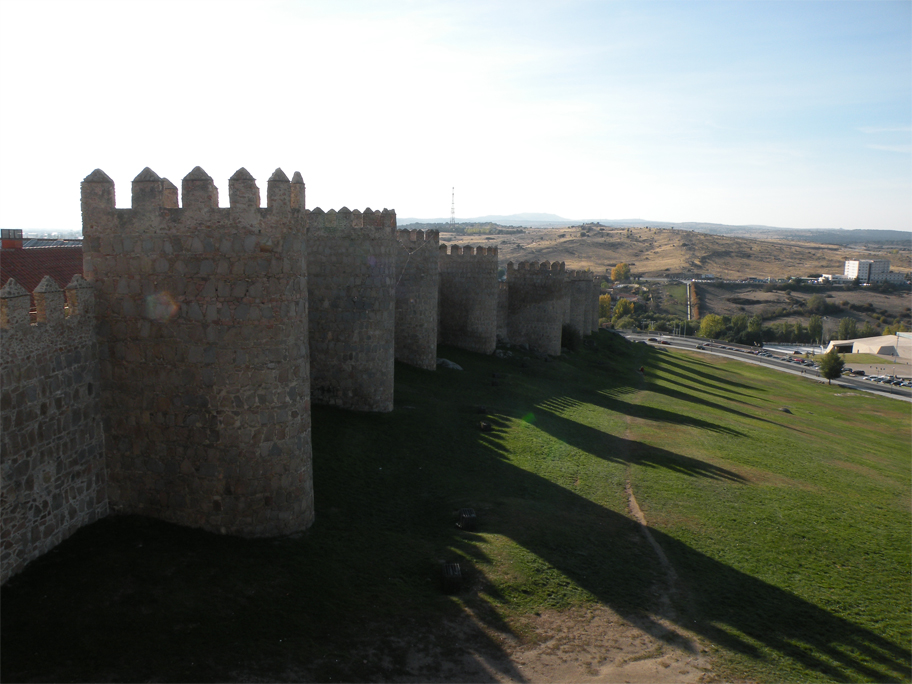 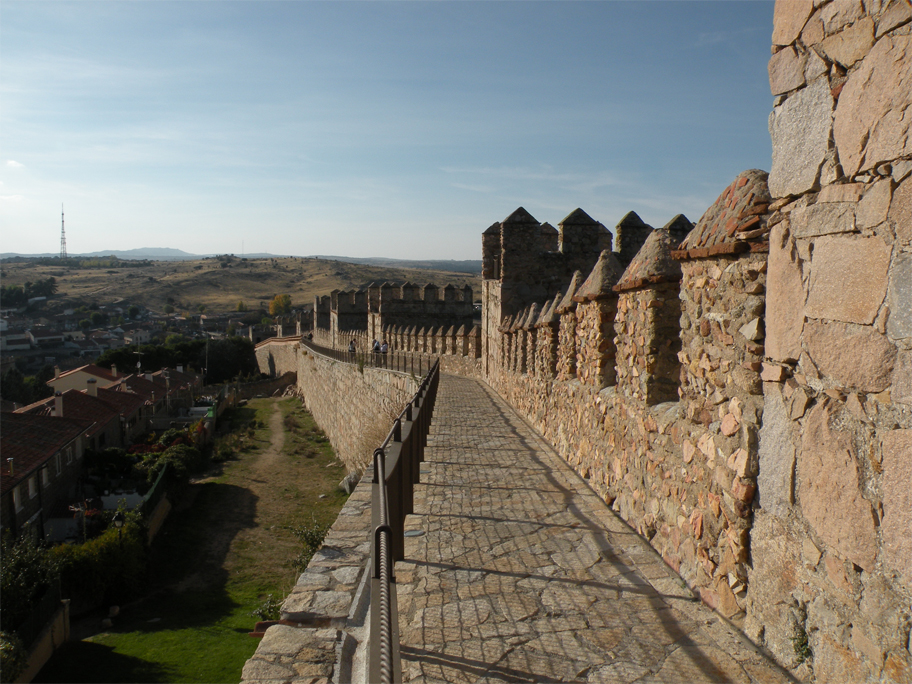 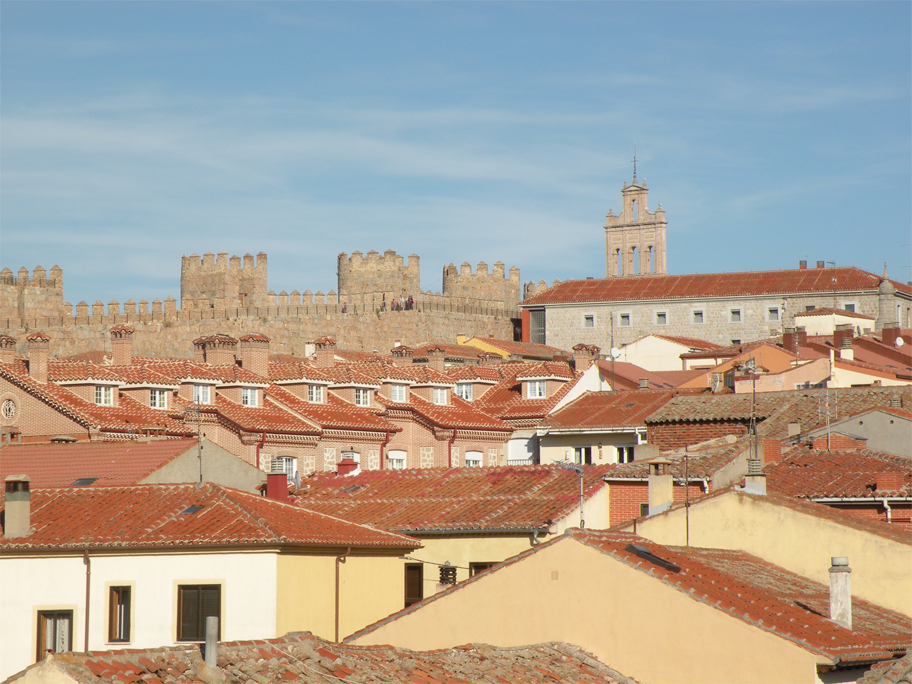 Having completed a full circuit around the city walls, we found ourselves in front of the Convent of Santa Teresa. The convent itself looked closed but we could see visitors entering a low building; as we got closer we realised that it held a souvenir shop and a small hall of reliquaries.

Alongside portraits of the saint there was a collection of miscellaneous items, including the walking stick she used in her older years, a piece of fabric she wore and rather grotesquely, the preserved remains of her ring finger – with ring still attached.

Behind the glass cases we also spied a few relics of San Juan de la Cruz (St. John of the Cross), another major figure of the Spanish Counter-Reformation. Together with Saint Teresa he formed the Order of the Discalced Carmelites, a move which resulted in a brutal 9-month long jail sentence in Toledo. It was during this time that he composed much of the Spiritual Canticle, the most famous of his mystical poems. His experiences in jail would ultimately influence his later works, most notably Dark Night of the Soul. Writing during the Spanish Golden Age, the richness and stylistic beauty of his poetry was unparalleled among his contemporaries. For this reason San Juan de la Cruz is considered one of the foremost poets of the Spanish language. 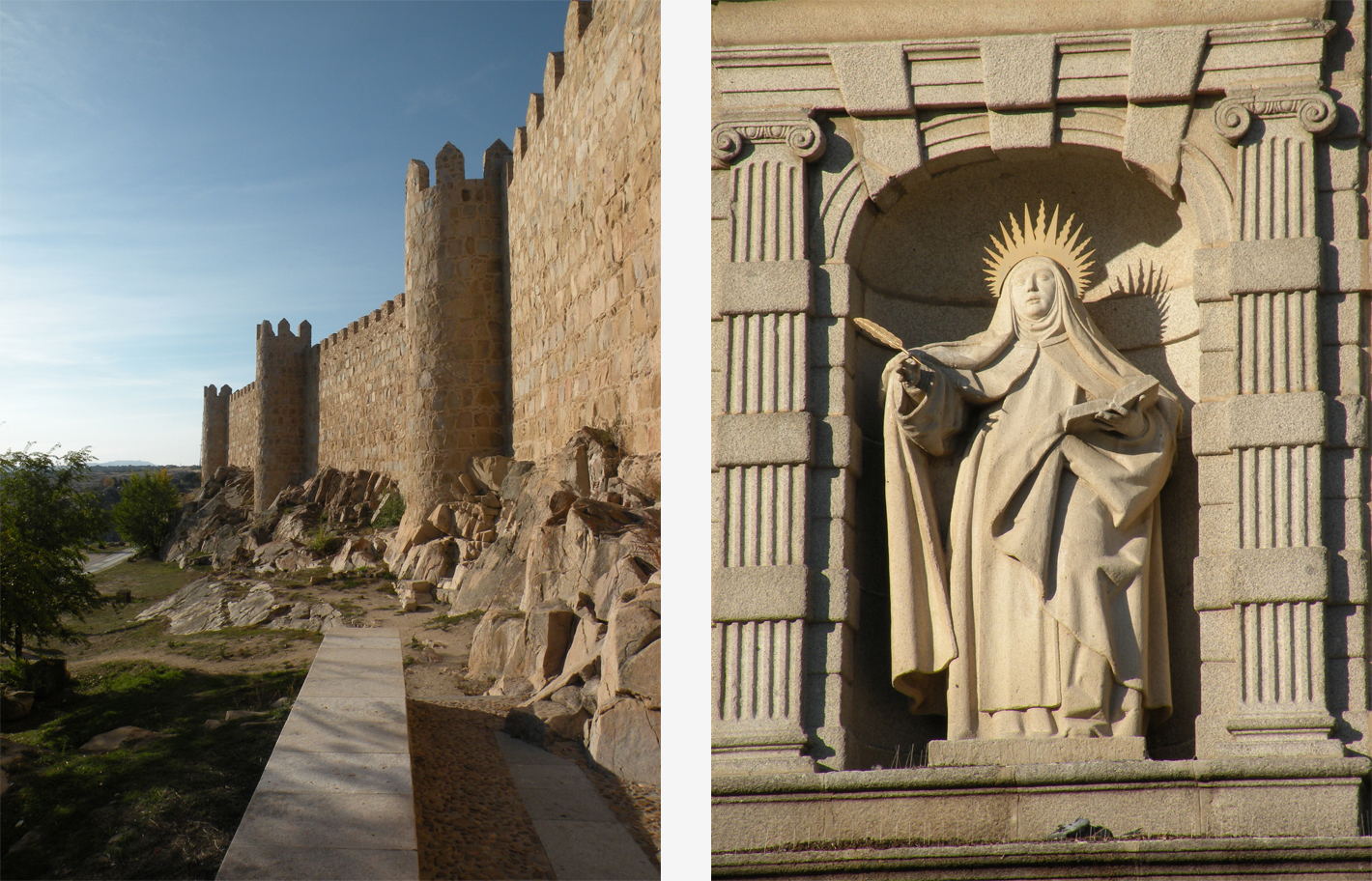 As the sun dipped lower in the sky, we ended our walking tour at the Plaza de la Victoria, home to the town hall and a wonderful pastry shop selling Yemas de Santa Teresa. Made from egg yolk, lemon and an untold quantity of sugar, these confectionaries are a specialty of the city. My Spanish teacher had cautioned that they were extremely sweet, but being a lover of desserts I knew I had to buy a small box to sample them.

The more I discover Spain, the more I see parallels with my native Hong Kong – my first bite of a yema was no exception. It tasted just like the filling of a steamed custard bun (a nai wong bao), but with less milk and more sugar. I gave one to Fred and within 5 minutes I had polished off seven of the sticky delights. Like the custard buns back home, these yemas were seriously addictive. 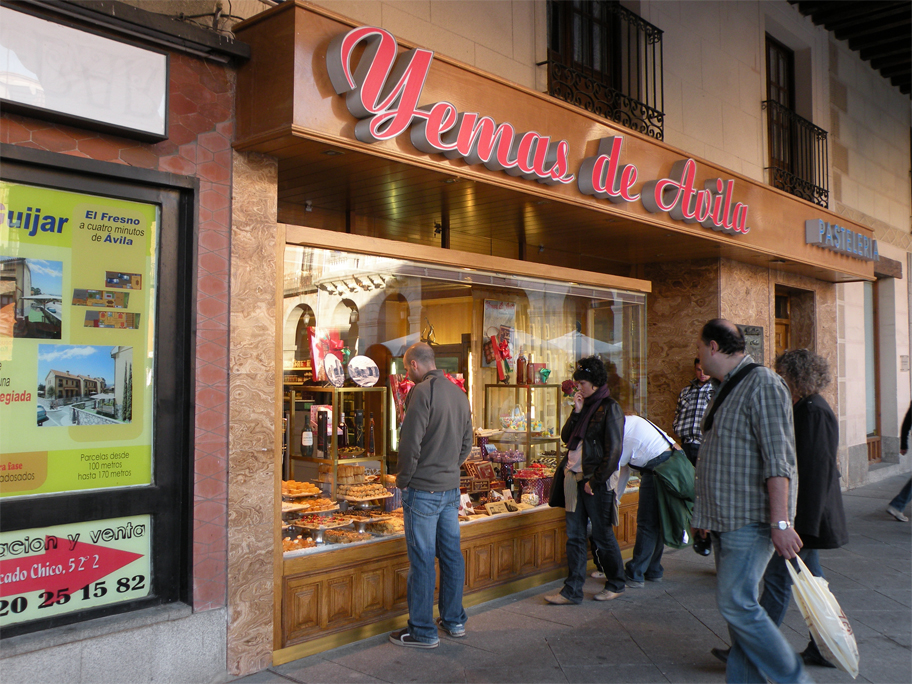 Before leaving Ávila there was one last box we had to tick. I had read about its famous chuletón, a T-bone steak made with the local beef. And so Fred and I wandered around until we found a restaurant that was serving food at the untimely hour of 6:30pm. This too was at the Plaza de la Victoria, and to our genuine surprise it had the friendliest waiter we encountered in weeks.

For starters I ordered judías del barco, another local specialty of white beans and chorizo in a warming tomato sauce – the perfect antidote for a chilly autumn evening. And then came the chunky chuletón, a big steak that we both struggled to finish. I definitely liked it at first, but after having the juiciest meats in Salamanca this wasn’t something to rave about – the steak was too well done.

Even though the chuletón was a slight disappointment, our meal was still a great experience. Watching night fall on the plaza with a good flan is like sitting at home in front of your favourite show, but better. And then there are the unexpected events, a memorable one being the 9:00 call to dinner from the bell tower just off the square.

It was beginning to get cold, so Fred and I paid the bill and ambled back to the train station. At more than 1100 metres above sea level, Ávila is Spain’s highest provincial capital – so even if you visit during the summer months it would be wise to bring a jacket.

We left the old city through a smaller gate and proceeded along its formidable towers. Under the light of the full moon, Ávila was both peaceful and sublime. I took a deep breath and inhaled the cool evening air.