No Rain on This Parade – Lisbon, Portugal.

As the train crossed the border from Spain to Portugal, we began to get the sense that we had passed over into the unknown. Not only was the language different, but the scenery was turning increasing shades of green and our train began to rock from side to side.

The only train from Salamanca left at 4:30 in the morning, so we spent much of the journey trying to get some sleep. I managed to doze off somewhere past the university town of Coimbra, waking up only as we stopped in the beautiful Gare do Oriente, a mere 15-20 minutes from our final destination.

At around 10:30 the train pulled into Santa Apolónia Station in the midst of a heavy rainstorm. In a strangely comforting way, it was reminiscent of the subtropical summers back home in Hong Kong. We ran for the shelter of the main building as the rain created a cacophony on the station’s cast iron roof.

There was no way we were going to negotiate public transport in this weather so we opted for a taxi to the hostel. As it turns out, this was going to be one of the most interesting taxi rides I would have in a long time. The streets along the waterfront were completely flooded, and in some places the water reached halfway to the top of the tyres. It was slightly unnerving to sense the weight of the water underneath.

The taxi turned right at a junction and began climbing streets at what seemed to be a 30-40 degree angle. If you think driving in Spain is aggressive try go to Portugal – it didn’t matter that we were on a steep incline, the taxi was still jostling for space with the other cars and Lisbon’s signature trams. Eventually we turned off a main road and arrived at the hostel, a rather lovable converted mansion with a palm tree out front. Once inside we spent a good part of the day marooned in the lounge whilst our rooms were being prepared. 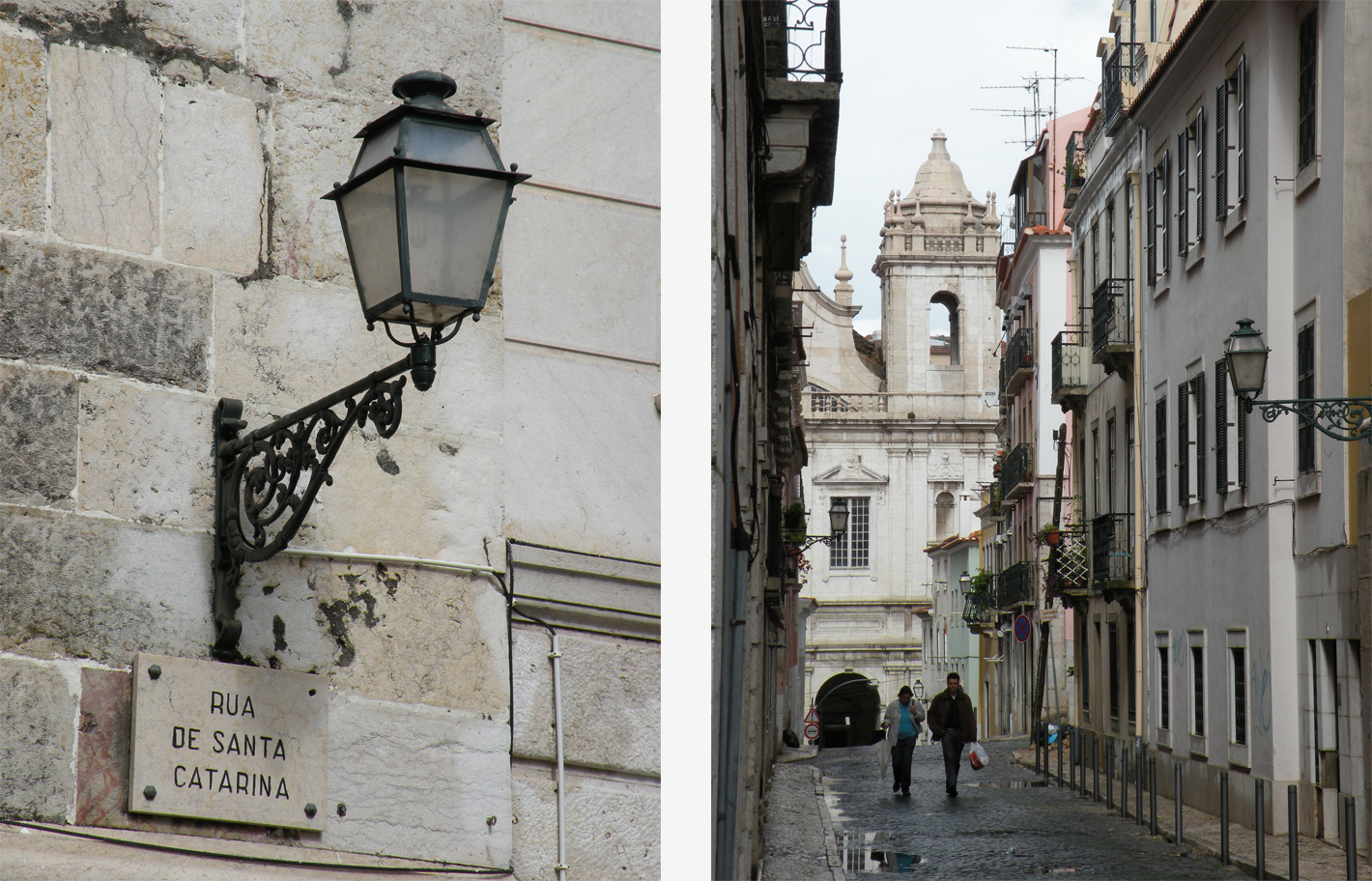 After a few hours of waiting, the hostel staff served us a drink of delicious cherry liquor, and we decided to head out for lunch. By now the rain had finally stopped and we were free to wander a little bit. Taking stock of our new surroundings, it was beginning to sink in that we were in a foreign country where we didn’t speak the language. “Obrigado”, the Portuguese word for “thank you”, was about as far as our knowledge could take us.

Crossing the tram tracks, we ducked into a nearby restaurant recommended by the hostel with the promise that it was “very Portuguese”. Unaware of the enormous portions, we each ordered a plate of bacalhau – Portugal’s famous salted cod – with a range of sauces and potatoes garnished with garlic and onion. At the back of the restaurant a TV screen was broadcasting the latest updates on the rainstorm and some images of flooded Lisbon streets.

When the bacalhau came we were in for a big surprise. Not only were they huge, but the smell was so mouth-watering it was enough to convert any person who wasn’t a fan of fish. Needless to say, the bacalhau was absolutely amazing.

With our bellies full, we emerged into the street, its pavement illuminated by the rays of the late afternoon sun. Above us the sky had turned a beautiful shade of blue and the general greyness had been reduced to a series of scattered clouds.

On the way back to the hostel we enjoyed a glorious view of the city from a lookout, and we sat down with a light breeze and the sun on our faces.

On two sides the horizon filled with colourful houses, red tiled roofs and a fascinating array of TV antennas. Like an informal urban sculpture these tumbled down the hillside towards the Tagus, with its serene waters stretched out towards the Atlantic. 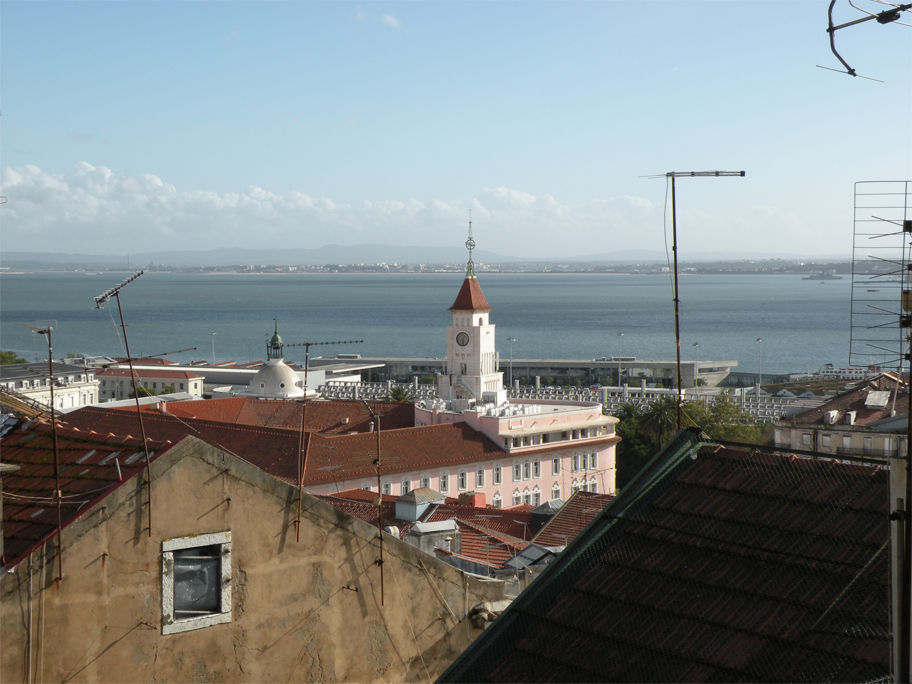 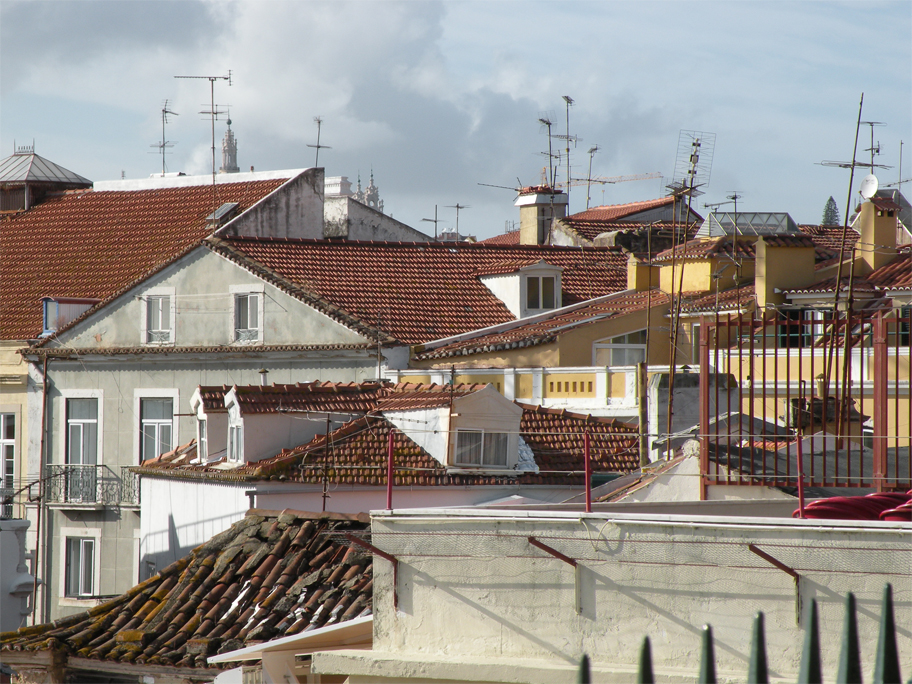 When night fell we were treated to a home cooked dinner and free welcome drinks at the hostel. Under a cloudless sky the bartender made us an amazing passionfruit mojito, and we finally got the opportunity to meet some of our fellow dorm mates. Among them there were 2 Canadians from Toronto, one of whom happened to live on the same stretch of main road as my cousins and grandparents.

After spending a month in Spain I was hugely impressed with the Portuguese and their flair for languages. Practically everyone here speaks or understands both Spanish and English, and many of those we met had also mastered French or Italian. One such person was a friend of the hostel staff by the name of João; that night he would take us on a guided bar crawl through the hip neighbourhood of Bairro Alto.

Undoubtedly the heart of Lisbon’s pulsating nightlife, Bairro Alto consists of bar after bar after bar, interspersed with a good amount of clubs and restaurants. It was Friday night and the people of Lisbon were out in force. Armed with our capirinhas, the delicious national cocktail of Brazil, we moved from bar to bar, soaking up the bohemian atmosphere of each one. Already this was looking to be the perfect weekend getaway from our studies in Salamanca.

The next day we hopped aboard a number 28 tram towards Alfama for an afternoon of sightseeing. Aside from walking, taking the tram is perhaps the best way to see Lisbon: prepare yourself for a substitute roller-coaster ride as it trundles up and down the hilly terrain. Beyond the tram terminus we found a traditional Portuguese restaurant – perfect for a long, hearty lunch and some shelter from the pouring rain. Here I helped myself to a generous plate of deep fried eel, served whole, as my companions looked on in horror.

Derived from the Arabic name Al-hamma, meaning fountains or baths, Alfama is the oldest part of the city and a testament to 400 years of Moorish rule. Its labyrinthine street pattern is not unlike various medinas throughout the Arab world, and its castle – the Castelo de São Jorge – has its origins in the Muslim period.

The district is also the traditional home of Fado, the mournful genre of music that has become a symbol of Portuguese culture. Based around the idea of saudade – a word unique to Portuguese and its sister language Galician – Fado is a musical representation of a profound feeling of loss; one that is permanent and irreparable with long-lasting consequences.

As Lisbon expanded beyond its old Moorish boundaries, Alfama gradually became the neighbourhood of fishermen and the poor. These two subjects, and the lives that they led, were the basis for the first fados that emerged in the early 19th century. 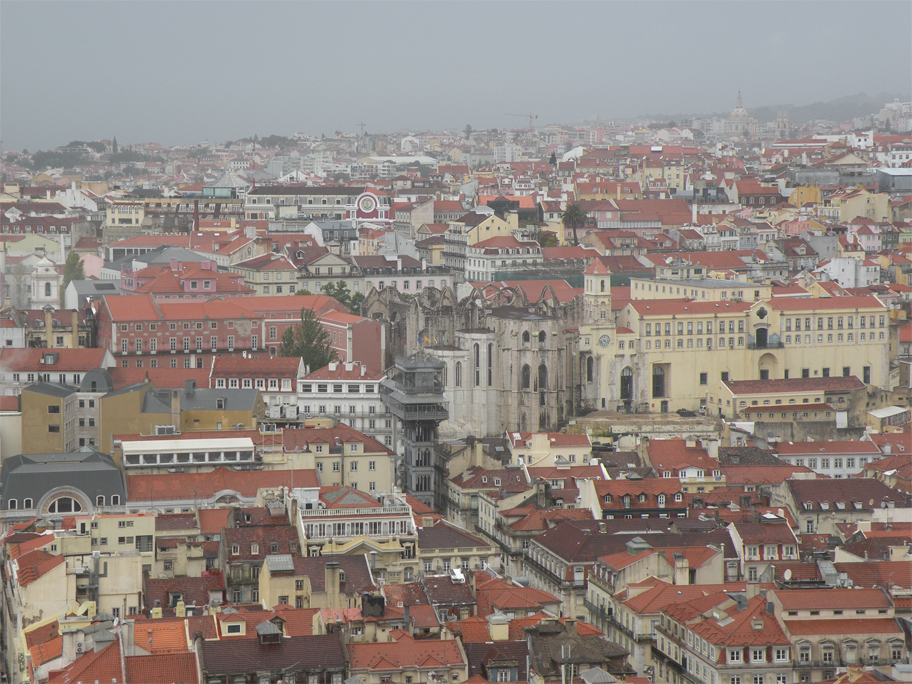 With its ridiculously steep streets, charming trams and a laidback artistic feel, Lisbon is really San Francisco in disguise. Not to mention the composite of the Golden Gate and Bay Bridges spanning the river.

As if that weren’t enough, the two cities also share a common slice of tragic history. In 1755 Lisbon suffered the same fate that would befall San Francisco roughly 150 years later. On the 1st of November, All Saints Day, the city was almost completely destroyed by a powerful earthquake and its after-effects, not least a tsunami that surged up the Tagus Estuary.

To this day the ruins of the Carmo Convent are kept as a memorial to the disaster, and these remains preside over the rebuilt downtown area, an exercise in rational squares and gridded streets lined with Pombaline architecture. 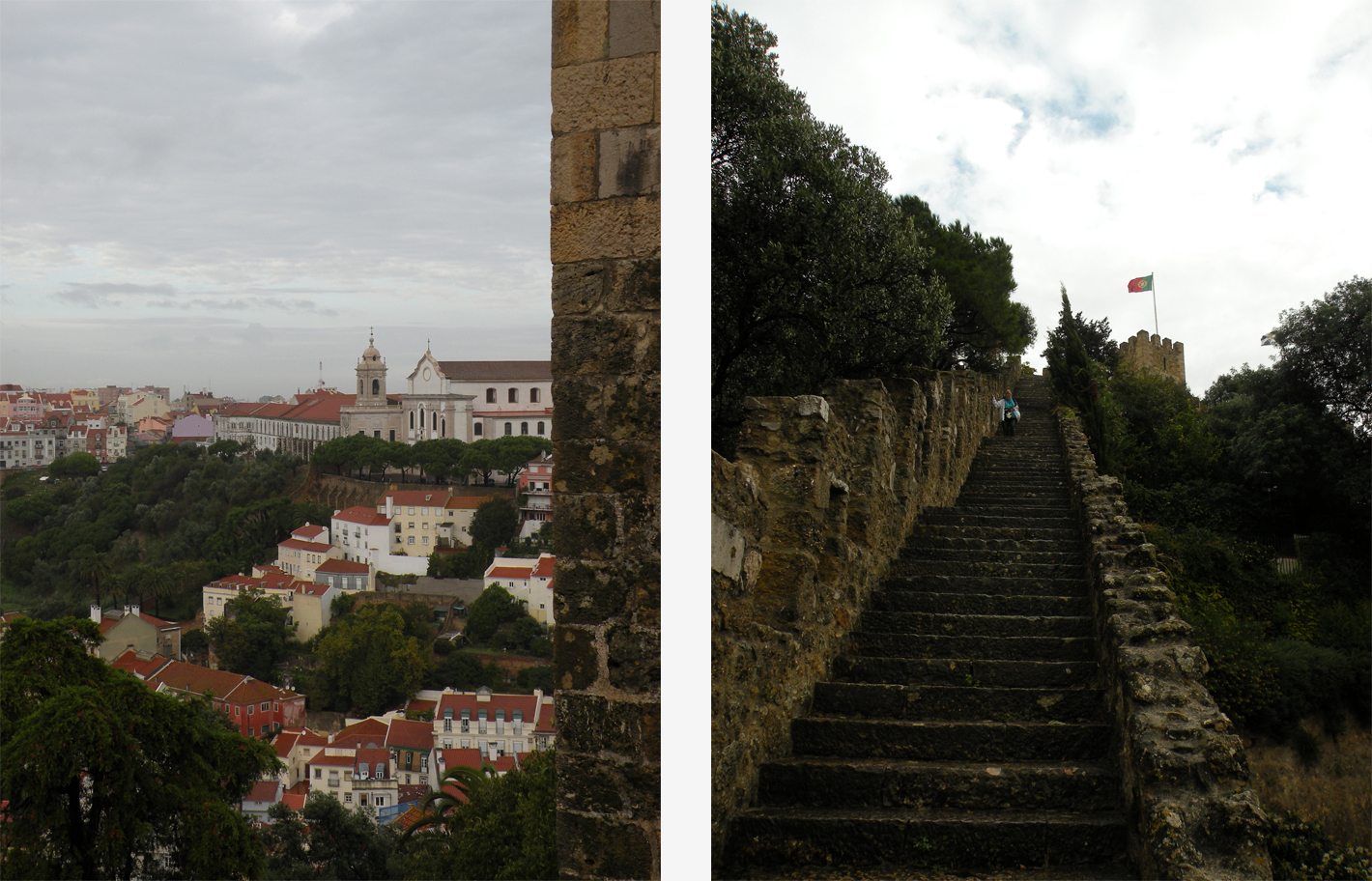 Despite the bad weather so far I was already beginning to fall in love with Lisbon. It had more character than Madrid, as much lovable grit as Hong Kong, and a beautiful combination of hilly terrain and water. With a friendly populace, great food and a buzzing arts scene, we had stumbled upon one of Europe’s most underrated capitals.