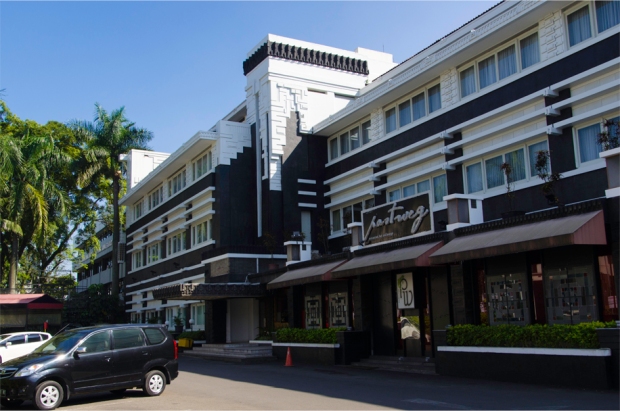 The 1930s were an age of unrestrained decadence. Radio had displaced newspapers as the most popular form of mass media; cinemas from Shanghai to Sao Paulo screened the latest in Hollywood films; ballrooms on both sides of the Atlantic echoed to the sounds of jazz and big band swing music; and the world seemed blissfully ignorant of the storm clouds brewing on the horizon.

In the Dutch East Indies, now the modern state of Indonesia, Bandung was at the height of its golden age. The city had by now acquired the moniker Parijs van Java – ‘Paris of Java’, thanks to its reputation as a fashionable retreat for the wealthy. Businessmen and socialites sought refuge from the sweltering heat of Batavia (Jakarta), while plantation owners based in the surrounding highlands congregated in Bandung for the same weekend diversions.

Braga Street, with its proliferation of exclusive cafés, restaurants and boutiques, was the place to see and be seen. At its southern end stood the clubhouse of the Concordia Society, whose large ballroom served as the city’s premier venue for social events. Attendees would have stayed close by in the prestigious Savoy Homann and Preanger hotels, both designed with the sleek lines and playful exuberance of Art Deco. To Dutch architects Bandung was an experimental laboratory, reflecting the mood of freewheeling optimism that was felt until the onset of World War II.

Bandung sprawls across a fertile plain over 750 metres above sea level, ringed by mountains in the middle of the Sundanese heartland. To the north rises active volcano Tangkuban Perahu (‘Upturned Boat’), named for its distinctive profile as seen from the basin.

Although the first mention of Bandung was recorded in the late 15th century, the modern city owes its foundation to the Grote Postweg (‘Great Post Road’) constructed in 1808. The Netherlands were then under the rule of Louis Bonaparte, younger brother of Napoleon, who ordered the newly-appointed Governor General, Herman Willem Daendels, to bolster the defenses of Java against British attack.

Part of Daendels’ defense plans entailed a military supply road connecting Batavia to the port town of Cirebon, roughly 200 kilometres to the east. But swampy conditions along the coastline meant that the Great Post Road would swing to the south, via the Priangan highlands.

Bandung at this time was almost 18 kilometres from its current position, but Daendels ordered the relocation of the entire town to the new road. Legend tells of his amazement at finding a site beside the Cikapundung River, where he drove a stake into the ground and declared, “Make sure that when I return, a city has been built here!”

Daendels was not known for being sympathetic to the local people. Built in just one year by an army of forced labourers, the Great Post Road would soon come to span 1,000 kilometres across the breadth of northern Java, from Anyer, on the Sunda Strait, to Panarukan in the east. The Governor General’s opponents criticised the harsh working conditions of the unpaid Javanese labourers, and one contemporary estimate counts up to 12,000 dead. There is little doubt that his heavy-handedness played a role in turning local rulers towards the British, who would successfully invade in 1811 and occupy the island for the next three years.

The origin of the nickname Gedung Sate – ‘Satay Building’ 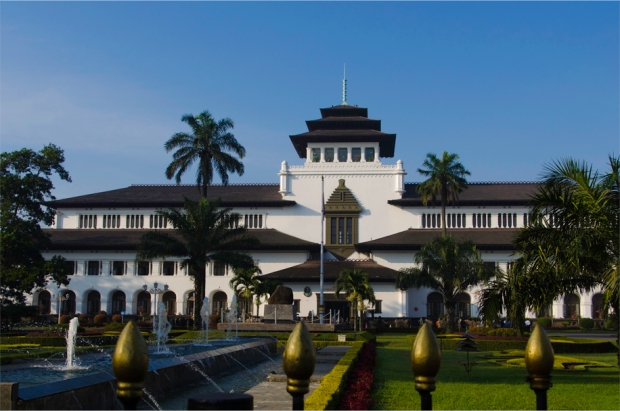 Designed by J. Gerber (1920), Gedung Sate is a blend of Balinese and European styles

The peaceful gardens behind Gedung Sate 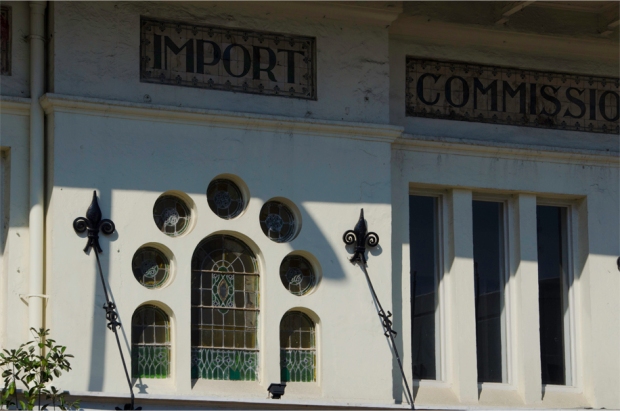 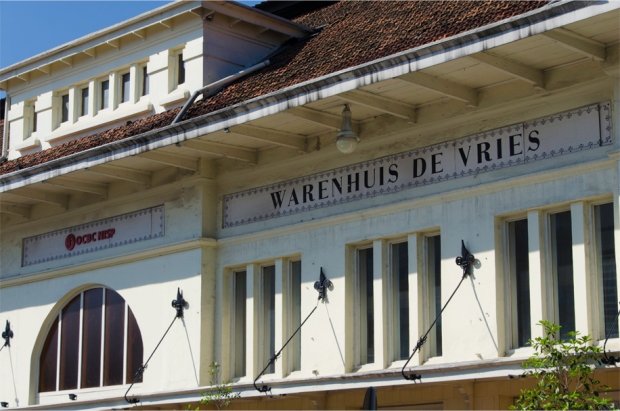 Built in 1920, the structure has now been converted into a bank

The Great Post Road had determined the new location of Bandung, but it was another project that helped speed up the city’s development. In 1880, Indonesia’s first major rail line opened between Bandung and Batavia, bringing it within two and a half hours of the capital.

Apart from attracting businessmen from Batavia, the new connection encouraged the growth of light industry, which allowed primary processing of the crops cultivated in the surrounding area. These included Assam tea, coffee and South American cinchona (or quinine), whose bark was an effective treatment against malaria. By the 1930s, plantations in Java would account for no less than 97% of the world’s quinine production.

Meanwhile the Dutch colonial authorities had ambitions of moving the capital from Batavia to Bandung, particularly because of its easily defensible position. The military headquarters was relocated around 1920, and it was hoped that other departments would eventually follow. Rice fields in the northeast of the city made way for a new capital district, where a wide boulevard was laid down, aligned towards the volcano of Tangkuban Perahu. It was a grand vision: flanked by various offices of the colonial government, the artery was planned to stretch some two and a half kilometres, culminating in an enormous monument to the north.

At the southern end of the avenue, a central administration building named Gouvernement Bedrijven (Government Companies) was built to a design by Dutch architect J. Gerber. Completed in 1920, the structure is a neoclassical fusion of European and Indonesian elements. The building’s eaves are adorned with Moorish arabesque patterns, its façades come studded with Italian Renaissance arches, while the tiered roofs recall the pavilions of Bali. Among native residents, Gerber’s new landmark gained the nickname Gedung Sate (‘Satay Building’), alluding to the resemblance of its central pinnacle to traditional meat skewers. The similarity is most likely unintentional; instead the pinnacle’s six pieces represent the cost of construction – some six million guilders. 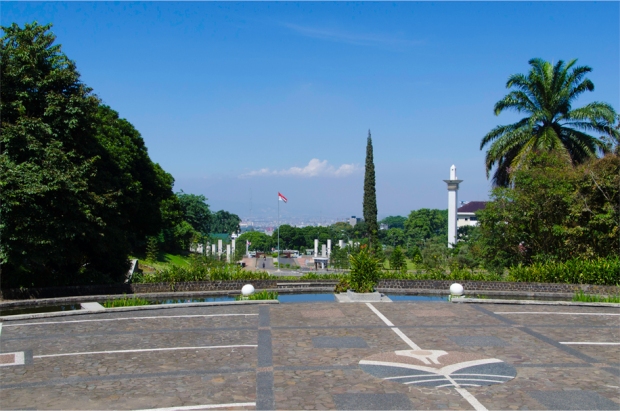 The view from Villa Isola, now part of  the Indonesia University of Education

C.P. Wolff Schoemaker’s masterpiece, it was completed in 1933

The villa’s northern facade, with an additional fourth storey 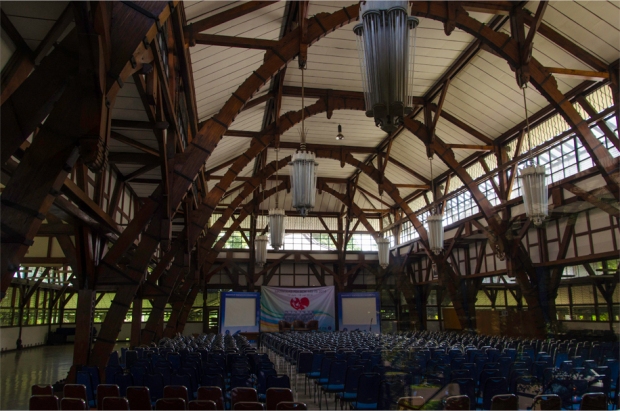 Inside the ceremonial Aula Barat (West Hall) at ITB, by Henri Maclaine Pont (1920)

The exterior of the Aula Timur (East Hall)

Both halls are set in the middle of well-tended courtyards

Looking into a decorative window, the East Hall

While Gedung Sate was being built, another key development took shape to the west of the planned capital district. Opened on July 3, 1920, the Technische Hoogeschool te Bandoeng (Technical College of Bandung) was the first university of its kind in the Dutch East Indies. The leafy campus and its original buildings were designed by Henri Maclaine Pont, who incorporated sweeping Sundanese roofs and other traditional motifs into his creations. Pont would go on to become professor of architecture at the new institution.

Indonesia-born architect C.P. Wolff Schoemaker was also a strong proponent of Bandung’s tropical Art Deco style. In 1922 he took up a teaching position at the Technical College, where he mentored a young talent by the name of Sukarno – none other than the founding father of the future Republic of Indonesia. With Sukarno’s help, Schoemaker renovated the Hotel Preanger in 1929, while he had a similar role in aiding Sukarno as he designed several houses around the city.

Schoemaker was responsible for a handful of other local landmarks, including the Concordia Society Clubhouse (1921), St. Peter’s Cathedral (1921), Bethel Church (1925), the New Majestic Theatre (1925) and the Pasteur Institute of Indonesia (1926). But his Magnum Opus is considered to be the Villa Isola (1933), which he designed for the Indo-European media mogul Dominique Willem Berretty.

Perched on high ground overlooking the city, the villa was a blend of the latest European architecture with Indonesian vernacular style. Recurring circular shapes throughout the building and its gardens were reputedly inspired by the ancient temples (candi) of East Java, while the complex was laid out on a north-south axis, its inspiration drawn from Javanese philosophy.

Another architect who contributed to Bandung’s Art Deco scene was Albert Aalbers, who preferred to use pared-down expressionism in DENIS Bank (1936) and his renovation of the Savoy Homann Hotel (1939). Both employed a central tower, long horizontal lines and curving forms that softened their ultramodern appearance. But World War II would put an abrupt end to the flowering of Bandung Deco. 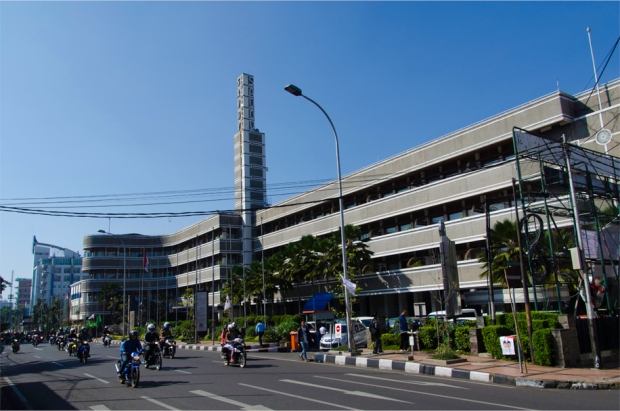 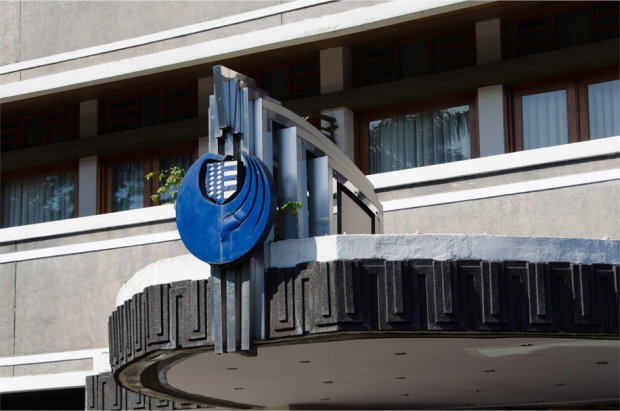 Decorative touches above the main entrance 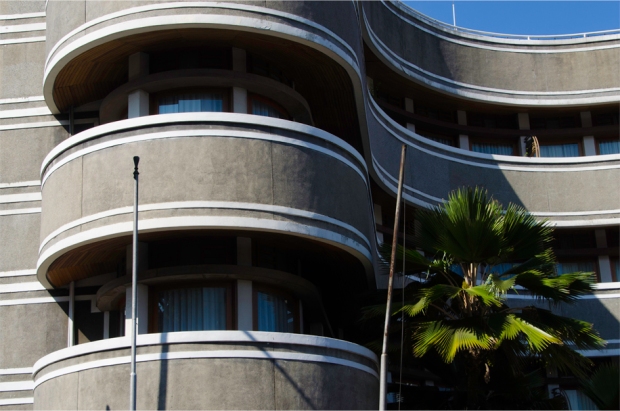 Curves in concrete – perhaps alluding to an ocean wave?

Along with the Savoy Homann, this was the hotel of choice for the wealthy

After Indonesia’s independence, secured through international pressure and a four-year period of armed struggle, the Dutch would never realise their grand plans for the city. Gedung Sate eventually became the office of the Governor of West Java, and a west wing was added for the provincial House of Representatives.

In the city centre, the storied Concordia Society Clubhouse took on a new role as Gedung Merdeka (‘Independence Building’), hosting the first Asian-African Conference in 1955. Heads of state in attendance included Nehru, Nasser and Tito, representing 29 countries and over half of the world’s population, and the conference paved the way for the creation of the Non-Aligned Movement some six years later.

The technical school was renamed Institut Teknologi Bandung (ITB), and it consistently ranks as the top university in the country. Internationally, its dominance in the fields of science and engineering give the institute a reputation as the Indonesian equivalent of MIT.

In a way, the physical environment of Bandung is still being shaped by creative professionals. Today the mayor’s office is occupied by native son Ridwan Kamil, Indonesia’s most famous architect. Like Pont and Schoemaker before him, Kamil served as a lecturer at ITB, his alma mater. But rather than leave an architectural stamp on his hometown, the mayor is more concerned with solving bigger issues and developing much-needed public transit. For Bandung, no longer an exclusive destination for the moneyed elite, is a city now bursting at the seams. ◊

A milestone for the Non-Aligned Movement 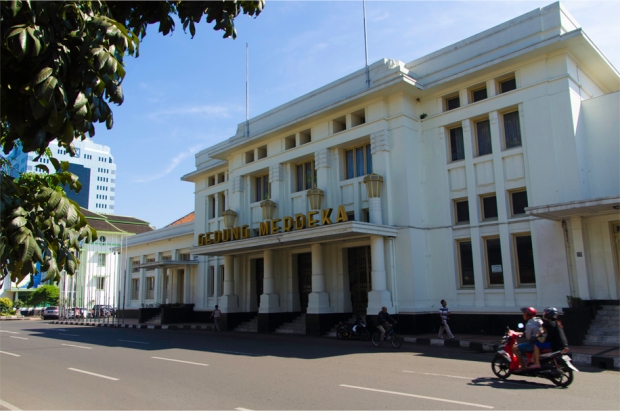 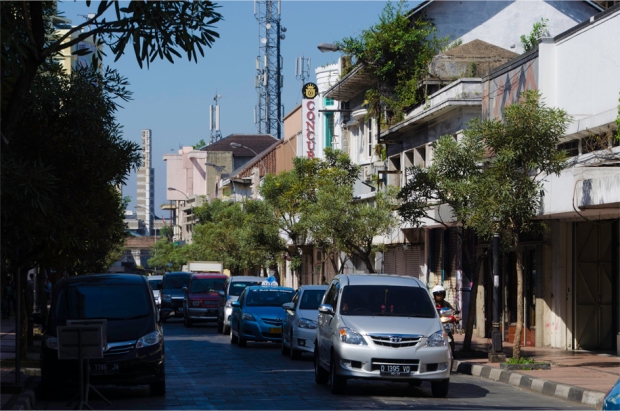 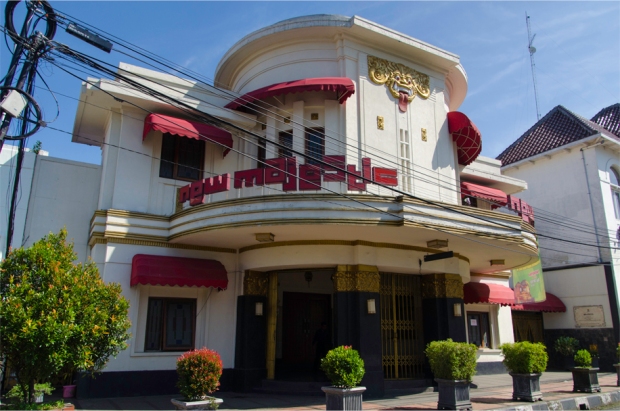 Built in 1925, the New Majestic was Indonesia’s first movie theatre