Tonight in Hong Kong, there is a sense that history is being made.

Many of you have seen or read about what is happening right here in my hometown. Yesterday brought scenes that I could never have imagined in this safe and stable city. We watched in horror at the footage of riot police, armed with rifles and donning Stormtrooper helmets, lobbing volleys of tear gas into crowds of unarmed protestors. Some on the front line were particularly vicious: one video showed an elderly man being tapped on the shoulder before getting pepper sprayed at point blank range. Police even fired tear gas directly into a first aid station, incapacitating volunteer medics from a public hospital.

Hong Kong’s finest, who were tasked to serve and protect, had turned on its own people in the most violent crackdown since 1967. But the wanton brutality only served to embolden angry residents; many who did not plan on joining the protest streamed out onto the streets. Over the announcement system, subway train drivers pleaded with passengers to join the growing movement. When police pursued the demonstrators with more tear gas, new protest venues sprung up in the shopping areas of Mong Kok and Causeway Bay. And there the people stayed, waiting and watching until dawn.

At the protest site in Causeway Bay 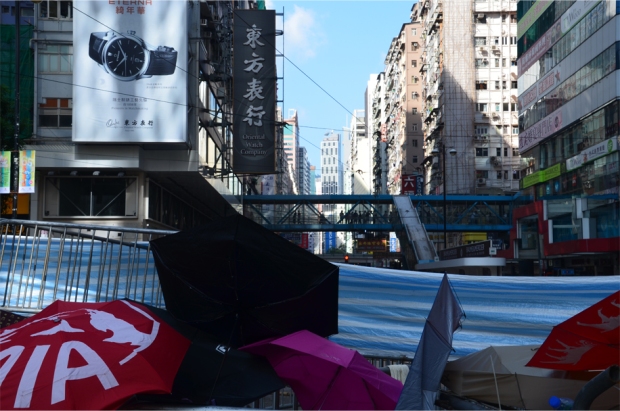 Umbrellas on the barricade

On my way to work this morning, I decided to stop by the protest in Causeway Bay. The mood there was strangely peaceful. Curious commuters, with smartphone cameras in hand, freely mingled with those who remained camped out from the night before. The police had simply vanished. Down the road, the barricades had inadvertently made the streets more human: no longer were we breathing in diesel fumes from a ceaseless stream of traffic, but for once, we could slow down and mill about on the concrete. I also noticed umbrellas of all colours – some placed haphazardly on the barricades, others sheltering tired students from the morning sun. Thanks to the events of the past few days, the humble and ubiquitous umbrella has now become Hong Kong’s symbol of peaceful resistance.

Unlike the police, student demonstrators have been lauded for their politeness and discipline. At least 50,000 protestors were out on the streets last night, but not a single car was burned and not a single shop window smashed. Protestors today remain just as considerate: one put up a cardboard sign with the words “sorry for the inconvenience”, while others actively collected trash and recycled plastic bottles. In Causeway Bay, the sit-ins took place on the roadway, freeing up the pavement for other denizens to go about their daily lives. I was moved by the generosity I saw: one protestor wheeled a shopping trolley filled with supplies, while another asked fellow students if they needed cakes to sate their hunger. This photo on Twitter showed sympathetic office workers donating food and water to the students.

We do not yet know what our toothless government will do. We do not know if they will heed the growing calls for our ineffectual leader to resign, or if they will implement the electoral reform that this mature society deserves. The wish is for someone who will not kowtow to some distant bureaucrats in Beijing, but instead, lead with Hong Kong’s best interests at heart. ◊