Nihiwatu: on the edge of dreams

In the darkness, the sound of the crashing waves grew louder still. They churned up a hundred thousand grains of sand, gouging them from the depths and sweeping them up onto Nihiwatu beach. The rocks dotting the foreshore were pockmarked and worn – great stumps that doggedly clung to the land as the Indian Ocean surged and foamed around them, its waters quickening with the rising tide.

Walking beneath the constellations, I felt as though we were characters in a dream. And yet reality had brought us to an eco-resort on the wild coast of Sumba, Indonesia. There were four of us: four wide-eyed city dwellers more used to the neon-lit canyons of Hong Kong, where the glow of humanity sent a pallid haze into the night sky.

Over there, I told the driver, you cannot see the stars.

We were navigating a dirt track en route from Tambolaka Airport, 90 minutes to two hours away. I had taken my place in the passenger seat, a young coconut knocking against the raised edges of the centre console. Here I found a parcel of banana leaf fastened with a toothpick, holding a small heap of roasted cashews coated in a tangy sauce. As we pulled away from the airport terminal, our driver Martin turned to me and smiled. “Grown in Sumba,” he said.

The flight from Bali takes only 50 minutes, but Sumba already feels like a different country. Unlike its neighbours to the north, the island is not volcanic, and 12 or 13 distinct languages are spoken among a population of less than 700,000. The differences are apparent even in the people themselves: compared to the Balinese, men in Sumba seem to have thicker, bushier eyebrows and more rugged facial features. These traits are reflected in the geography of their home island.

And it wasn’t just the landscape – what I saw through the windows suggested a culture that was raw and deeply spiritual. Martin pointed out the tombs in front yards, tapered rectangular structures with six bulbous flourishes on top. The traditional houses had tall, steeply pitched roofs, some in alang-alang grass, most in corrugated iron, but always with two wooden figures adorning the ridge.

We had arrived in Sumba at the start of wet season, and raindrops flecked the windshield for much of our journey. Eventually the winding road from Tambolaka led us into the limestone hills, where candlenut trees stood proudly on either side. At one point my eyes were drawn to a single trunk, ash-grey and thick, that loomed straight ahead. “Mahogany,” Martin told me.

In earlier times, Sumba’s most valuable commodity was perfumed wood, sourced from the forests that once covered the island. “Are there still many sandalwood trees here?” I asked in halting Indonesian. “Oh yes,” Martin replied, “many!” And then a longer sentence at shotgun speed: “But now…” I heard a jumble of unfamiliar terms, before finding a clue in “potong”, the word for cut.

As our vehicle edged closer to Nihiwatu, breezing over the parched, undulating landscape, it seemed as though we were miles away from the nearest town. Potholes began to litter the road; soon we were being jolted over an uneven mix of dirt and weathered tarmac. “Sorry, sorry,” Martin apologised profusely, “jalan rusak” – the road is broken.

But the discomfort was short-lived. At the final switchback leading down into the resort, we gasped at the sight of the untamed coastline, unfolding between fingers of land crowned with coconut trees and swathes of long grass. A simple T-shaped sign stood by the roadside: “NIHIWATU”, it declared, “WELCOME TO THE EDGE OF WILDNESS”.

Upon arrival I craned my neck at the soaring roof of the Menara – part lounge, part bookshop and bar with a stack of buffalo horns on the back wall. From the floor of raked sand a series of rough-hewn tree trunks rose into the air, supporting an intricate web of rafters in teak and bamboo. Soon we were escorted to our villas, down pathways lined with rough stone walls and arcs of bougainvillea, framing perfect views of the sea.

Out on the waters a small boat was bobbing in the swells, beyond a left-hand break as it tumbled over the shallow reef. Occasionally, bolts of lightning and claps of thunder broke the monotony of a steely grey sky. But the rain was no more than a drizzle – in time the weather would clear for an alfresco dinner and a walk on the beach, where we listened to the ocean’s roar as it ebbed and flowed beneath a veil of stars. ◊ 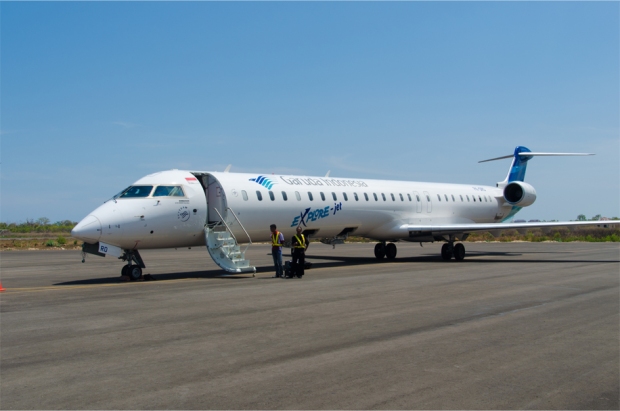 Between Bali and Sumba, in a Bombardier jet 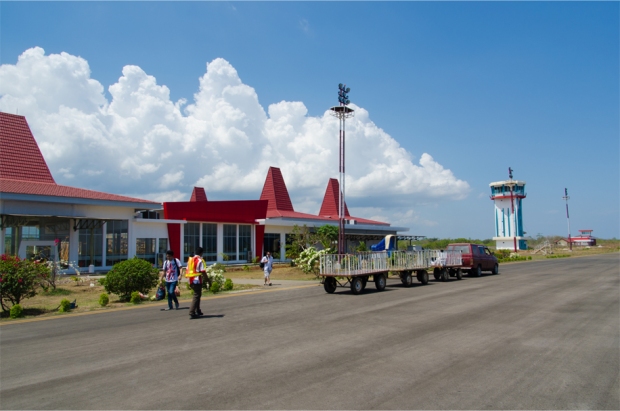 On the tarmac at Tambolaka Airport

Nihiwatu beach from the resort’s entrance 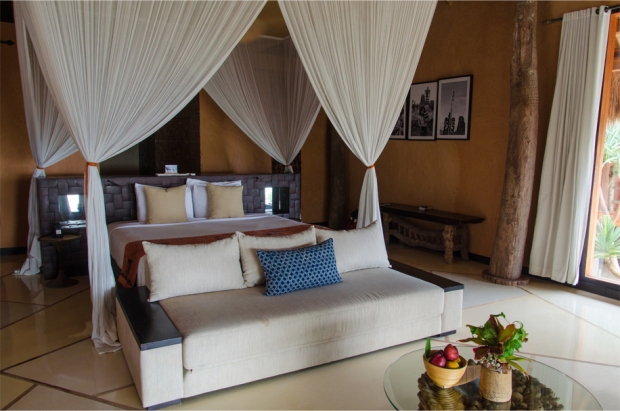 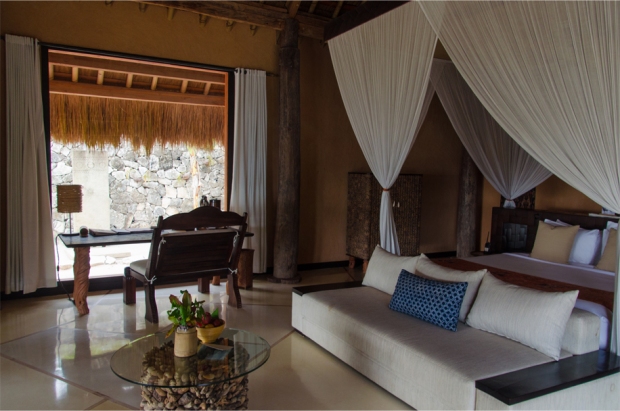 My favourite feature: the writing desk and its solid wood chair, wide enough to fit two 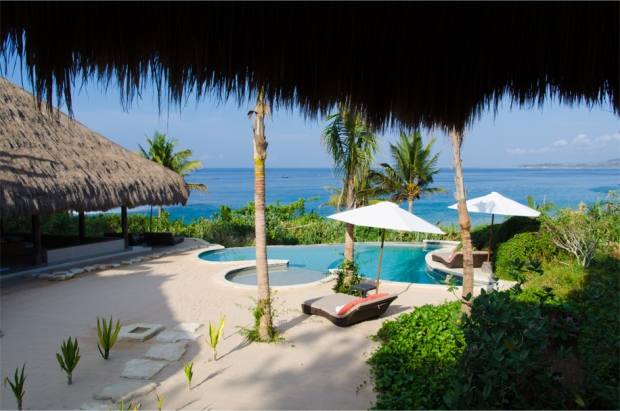 View from the veranda

Prelude to breakfast above Nihioka Beach 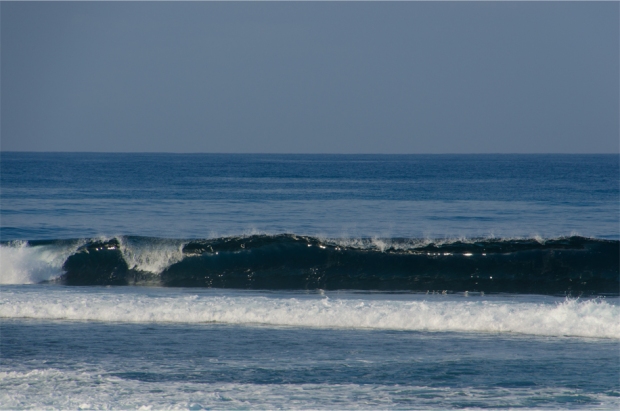 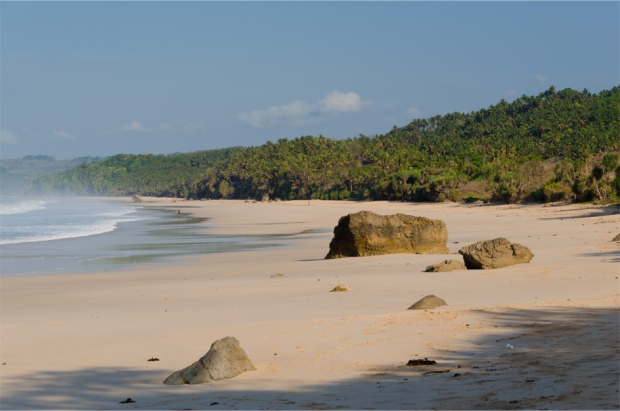 A scene worthy of ‘Castaway’ 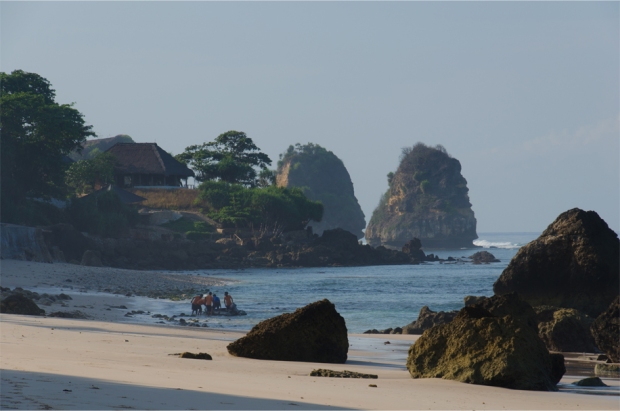 Back from a surfing session 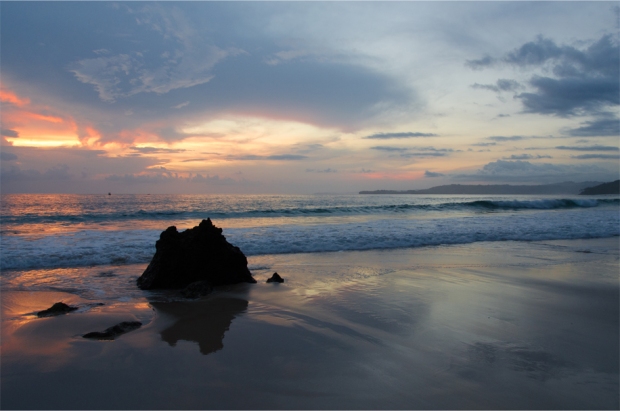