Reflections on a Hong Kong hike

There is an old Chinese idiom which expresses a person’s unbreakable ties to their family, hometown, and ancestral land: “Falling leaves return to their roots”.

Both my parents have direct ancestry from Taishan (Toisan), a region west of the Pearl River Delta that is broadly known as Sze Yup. Literally ‘Four Counties’, it is the humble place of origin for millions of overseas Chinese. My mother fondly recounts her college days when a sprinkling of Taishanese phrases, formerly the lingua franca in American Chinatowns, would get her a discount on fresh produce.

Like my family, most Hong Kongers are really from somewhere else. Few belong to the indigenous clans who settled in the fertile plains of the New Territories, or are sons and daughters of the fishing villages dotting the coastline.

The other weekend I joined a five-hour hike led by Henness, a young activist whose ancestors were some of the original settlers of Hong Kong. With two other friends, we walked the Yuen Tsuen Ancient Trail from Tsuen Wan to Shap Bat Heung, the ‘eighteen villages’ on the fertile Yuen Long plain. Until the British built Castle Peak Road in 1933, local farmers took this route to carry their produce across the hills and down to Tsuen Wan Market.

Today, precious little of that agricultural heritage remains. Including Lantau and the smaller outlying islands, the New Territories is home to roughly 3.7 million people – more than half of Hong Kong’s population. Much of the available flat land has been turned into a sprawling mass of low-rise housing, container storage yards, and densely populated new towns.

The Yuen Tsuen Ancient Trail, now supplanted by a road tunnel and rail line, serves a purely recreational purpose. On the trail we encountered both young and old: families, elderly couples, groups of walkers in their forties or fifties, all looking for some fresh air away from the smog and traffic of the city.

As much as I enjoyed the hike, I found that the most interesting part was yet to come. From the endpoint at a barbecue area overlooking Yuen Long New Town, we hopped aboard a taxi to Ma Tin Tsuen, Henness’ home village, for afternoon tea and a stroll through the original walled settlement. There we saw vegetable patches, papaya and other fruit-bearing trees. Across from his family’s ancestral shrine, Henness showed us a communal kitchen with a wood-burning stove and giant wok – perfect for cooking hearty delights such as lap mei fan: fragrant rice topped with a delicious assortment of cured meats.

It is a common symptom of city life – and the demands of a money-oriented, consumerist society – that we are disconnected from the land we inhabit. But even in a place as densely populated as Hong Kong, there are still pockets where firewood is fuel and fresh produce is harvested from the soil, just as it has been for generations. ◊

The skyscrapers of Tsuen Wan

Along the Yuen Tsuen Ancient Trail

It was first discovered on Hong Kong Island around 1880 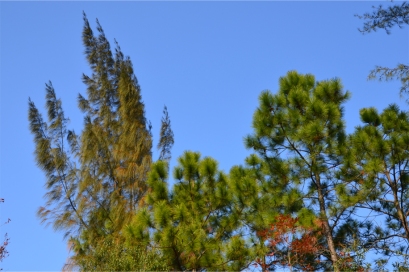 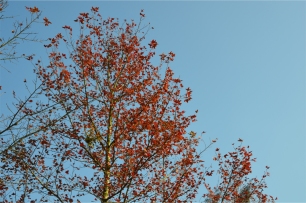 Sweet gum trees along the road

Through the gateway at Ma Tin Tsuen

Inside the village ancestral shrine