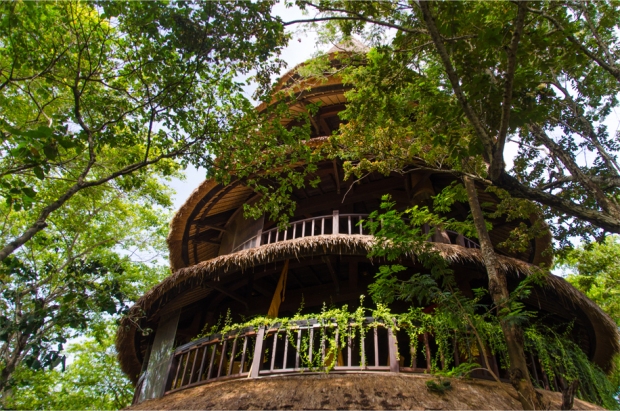 The rambling, stony trail beckons us deeper into the forest. Three identical wooden gateways stand straight ahead, pure Japanese in their simplicity, the green and gold patterns on their rough-hewn columns evoking the hollyhock crest of the Tokugawa shoguns. But this is Indonesia, and instead of a perfectly manicured landscape of framed views, Bama and I are about to discover a different kind of serenity.

The Menjangan lies four-and-a-half hours from the traffic jams and brazen commercialism of Bali’s crowded southern region. That is equivalent to a flight from Hong Kong, but for Bama and I, the drive is far more interesting than several hours spent at 30,000 feet.

In the back streets of Denpasar we come across a beautiful church, its decorative sculptures a beguiling blend of Biblical characters and Balinese motifs. Soon the sprawl of tiled roofs gives way to paddy fields and coconut palms – the Bali of the world’s imagination – with a backdrop of wooded peaks cloaked in low cloud.

West Bali is noticeably drier than other parts of the island, though the vegetation gleams iridescent shades of green at the peak of rainy season. We glimpse small-scale vineyards, whose rows of gnarled trunks mirror the craggy hillsides looming in the distance. Eventually we turn off the main road and slip into a wall of greenery, entering The Menjangan’s 382 hectares of national park.

The Deck – for breakfast with a view 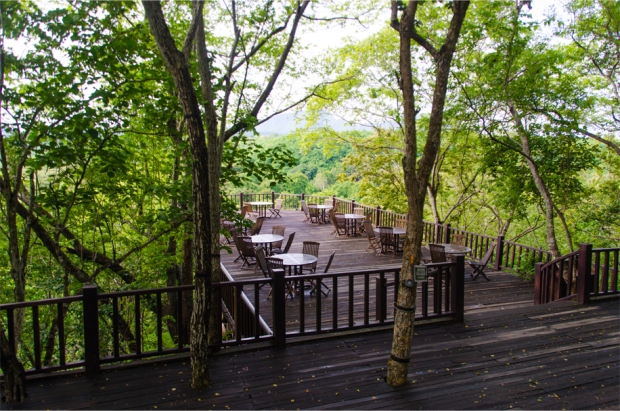 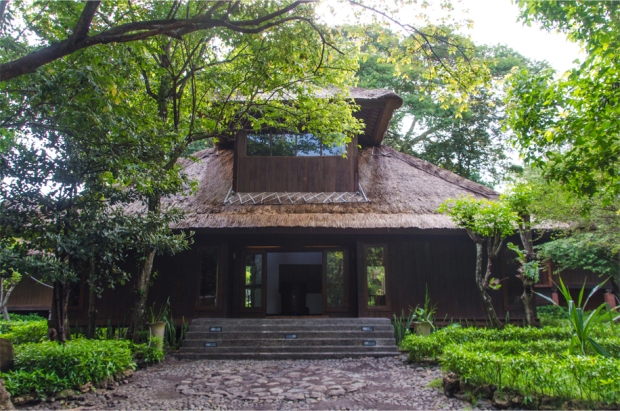 Entrance to the Monsoon Lodge 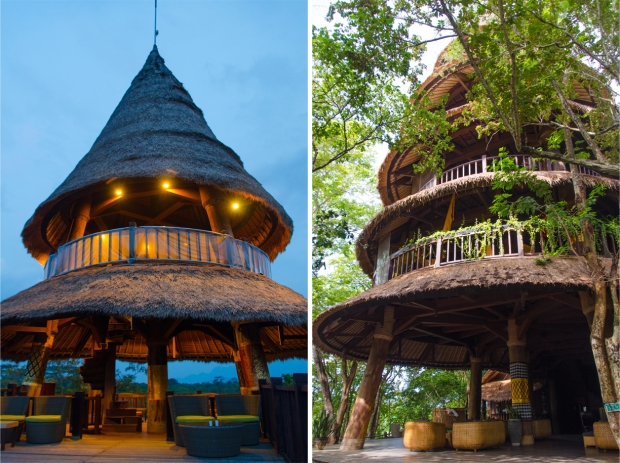 Night and day at the Bali Tower

Gelgel is there to greet us when we pull up to the reception area. He’s grinning from ear to ear, and as I crane my neck to take in the Bali Tower, I can see why he is excited to show us around.

Built entirely of timber, bamboo and alang-alang, the five-storey tower is the architectural centrepiece of the resort. We pause by one of the main columns, a single tree trunk some 28 metres high, and Gelgel tells us it is bengkirai hardwood from Kalimantan (Borneo). “It was carried here by 250 men,” he declares. “We didn’t want to damage the place by chopping more trees to build roads for trucks.”

We climb a spiral staircase to the uppermost level, where the view stretches a full 360 degrees. To our surprise there is not a single village in sight. The low profile of Menjangan Island lies to the northwest, and behind it we can barely make out the hazy silhouette of Mount Baluran, an extinct volcano on neighbouring Java. Across the calm waters of Terima Bay, the main body of West Bali National Park seems blissfully undisturbed. It is a rare glimpse of how Bali might have looked before humans arrived, felling much of the island’s rainforest and carving out the sinuous rice terraces of Jatiluwih and Tegalalang.

Below the tower, a timber deck extends from the escarpment and projects over a lush valley. The vista is so inviting I barely notice the dining chairs that have tipped over, but Gelgel has already sprung into action. “It’s the monkeys,” he says, putting them back in place. “Sometimes they come out and play.”

The macaques living at The Menjangan are not the mischievous bandits of Uluwatu; a no-feeding policy is in place to discourage aggressive behaviour and human dependence in the local wildlife. It’s fitting for a resort that takes its name from the resident deer, which are often seen wandering past the beach villas at low tide.

Local deer in the shallows

A buck and his doe

Grazing among the aerial roots

The Menjangan’s constituent parts occupy a small fraction of the vast property. Between the tower, beach, and our room, we are ferried around on improvised safari cars – modified vans with seating on the upper deck. Curved metal bars lend these vehicles the name trenggiling, a reference to the scaly and elusive Sunda pangolin. Riding the trenggiling proves a simple way to spot the resident animals.

For an inveterate city-dweller, adjusting to the profusion of green is like learning to see again. I initially miss a pair of blue kingfishers dancing in the trees, but when my eyes become more attuned I catch sight of several red junglefowl, or ayam hutan (literally “forest chicken”), their flamboyant tails a surprising shade of teal.

In the Monsoon Lodge, a compound with a central swimming pool, our room is cocooned in the sounds of the forest. The birdsong is dominated by a gentle cooing that Bama identifies as a tekukur, or spotted dove. By night, an orange-flecked tokay gecko issues a musical, two-note mating call: “Eh-eh!” It sings. “Eh-eh! Eh-eh!”

Aside from the wildlife on land, a significant part of West Bali’s appeal lies in the surrounding ocean. Bama and I spend half a day snorkelling the coral reefs of Menjangan Island, and later that same afternoon, we paddle out in a double kayak for a meander through the nearby mangroves. 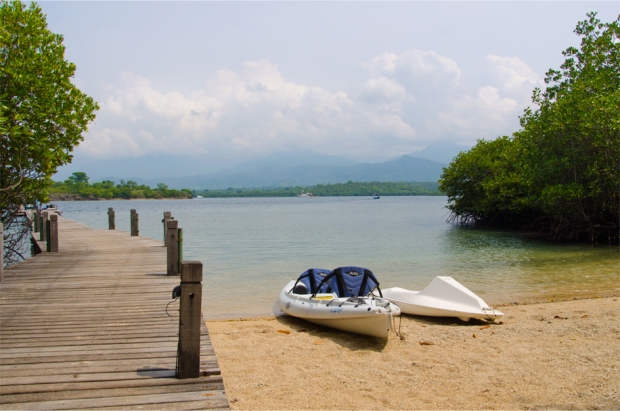 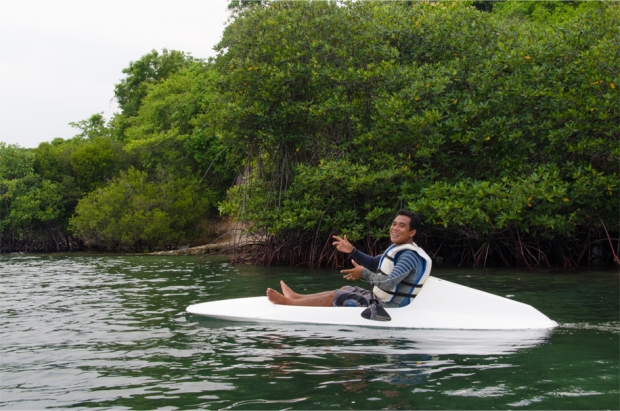 Wayan, our local kayaking guide, takes us into the sheltered waters of Bajul Bay. When we clear the maze of mangrove roots, Bama points to a balconied wooden structure high up amid the foliage, wondering if it is also part of the resort. “That’s the Residence,” Wayan nods. “It’s one of the best places for sunrise”.

We spend about an hour paddling leisurely, as Wayan explains mangrove biology, diving seasons, and even his future plans: “The next time you come back, maybe I’ll be a qualified dive instructor!”

On the opposite side of the bay, gaggles of local visitors frolic on the beach, while others ride paddleboats and inflatable rings in the shallows. Overhead the rainclouds show signs of breaking apart, and I know what Bama is thinking. Eager to catch the sunset from the Bali Tower, we push our paddles through the water and head back to shore.

It’s not long before my feet tread the final step onto the tower’s top level. To the west faint traces of dusky pink coat the edges of the persistent clouds. But the setting sun is nowhere to be seen, and night falls without the vivid magenta we had witnessed from the beach a day earlier. Still, the scene is beautiful in its isolation, and I marvel at the blanket of darkness, punctuated only by the twinkling lights of vessels out on the water. For serenity like this, a four-and-a-half hour drive seems a tiny price to pay. ◊

A foraging butterfly at Sentigi Beach 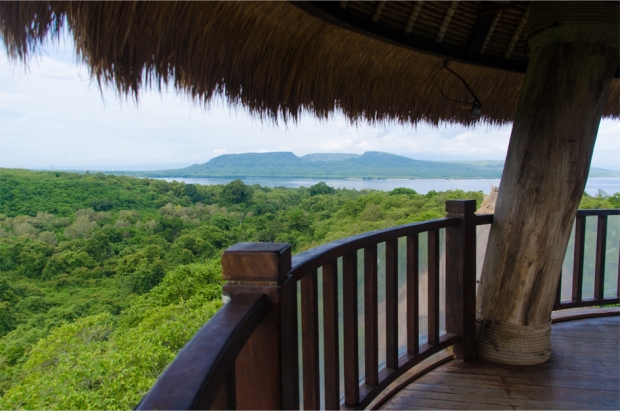 View from the Bali Tower 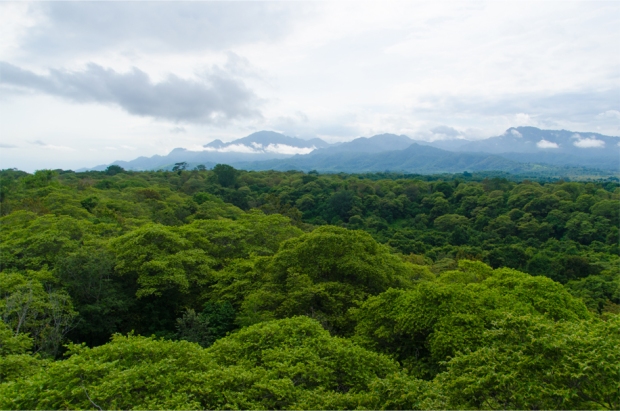 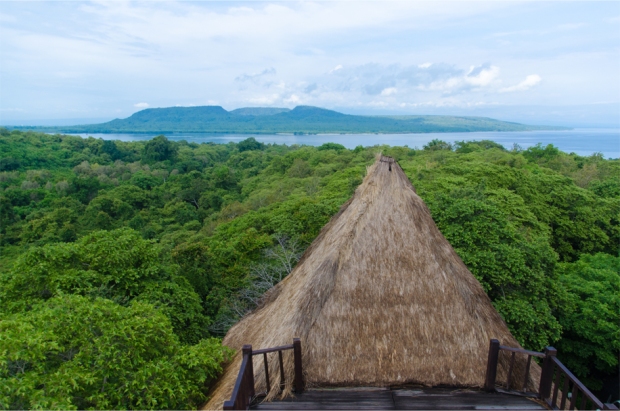 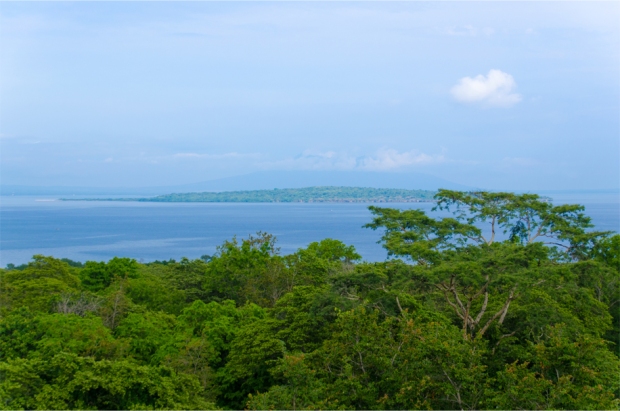 Menjangan Island and the faint outline of Java’s Mount Baluran