The dive guide looked at me in alarm. “January? That is not a good season for diving in Bali. He held a map of the balloon-shaped island, and with his other hand he brushed its upper portions. “It’s rainy season; storms come from the north, and the sea has a lot of trash… sometimes guests complain about all the rubbish – we say sorry, sorry, but what can we do?”

That was a month before the trip, and even though we are well aware of the seasonal blight, Bama and I are not at all deterred. Neither are the other guests as we sail past several patches of decomposing plastic bags, drinks containers and snack wrappings en route to Menjangan Island.

We ask Made, our jovial snorkelling guide, if he knows where the floating garbage comes from. “From Bali, from Java,” he says. Nicolas, a French documentary filmmaker who speaks fluent Indonesian, pipes in half-jokingly: “Dari manusia.” From humans.

The unfortunate truth is that Indonesia is the world’s second biggest marine polluter, disposing 3.2 million tonnes of plastic waste into the ocean per year. That is some way behind China’s whopping 8.8 million tonnes, but still 70% more than the next top offender, the Philippines.

Made scans the sea for more signs of pollution as we approach the first snorkelling site off Menjangan Island. “If there is garbage,” he says matter-of-factly, “we’ll go somewhere else.”

In the water there are occasions when we briefly encounter plastic debris, but thankfully the floating garbage does little to detract from the wonders below the surface. Here, the shallow reef of hard coral slopes down to a drop-off – a sheer wall that vanishes in the depths. I watch in amazement as Nicolas freedives some four or five metres below, swimming effortlessly through a coral-encrusted arch without touching the delicate frame. “I am not a diver,” he later says, “but an avid snorkeller.”

Further along the reef, giant clams peek out with slow-waving mantles in navy blue and a rich, deep purple. I come across my first gorgonian sea fan, a mesmerising pink among the sepia tones of the surrounding coral heads.

The reef’s more active residents – which are no less colourful – seem undisturbed by our presence as they glide past. We are drawn to the luminous yellow of two foxface rabbitfish, and the streamlined beauty of several Moorish idols. I stalk a parrotfish, named for its distinctive beak, as it forages and nibbles on coral polyps. In another nook Bama sees an aptly-named titan triggerfish, which sports beguiling patterns of white, black, pastel blue and yellow. When we show Made a photo of the titan, he exclaims, “Oh! These ones are dangerous!”

At the second snorkelling site we notice a dramatic temperature difference in the water – first the sensation of a cold current welling up from the deep, then a warm, sun-kissed layer directly over the reef. Made takes the lead with a stainless steel rod in hand, which he uses for pointing out the resident critters and unusual kinds of coral.

We spot clownfish hiding within the protective tentacles of sea anemones, drift over a series of gaping chasms, and discover a trio of larger gorgonian sea fans lined up on the edge of the drop-off. I linger for a while, swimming in circles around the sea fans until the rest of our group is nowhere to be seen. Even at the height of trash season, we realise, the reefs of Menjangan Island are still a magnificent sight. ◊ 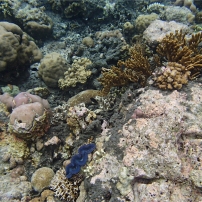 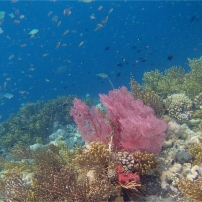 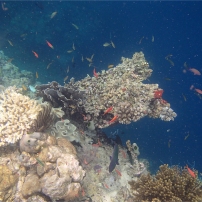 The mantle of another giant clam 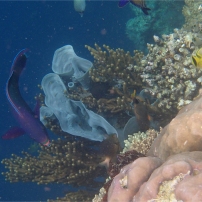 Not a plastic bag

A parrotfish scouts for food 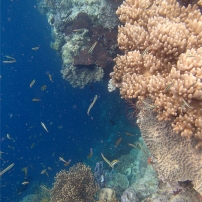 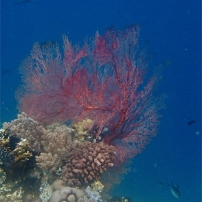