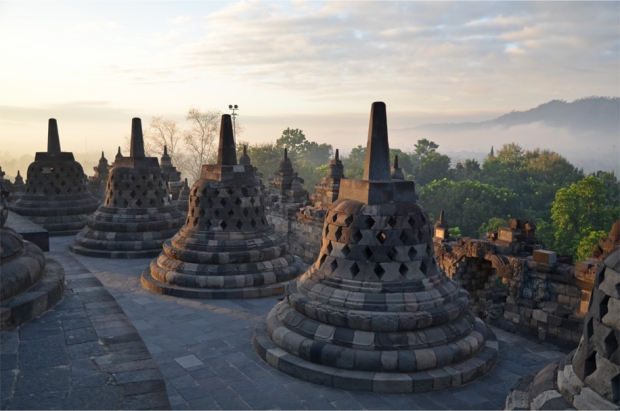 Under the veil of darkness, I saw little more than a hulking presence that towered in the distance. Our flashlights illuminated small details along the path: heavily worn steps, the edges of a gateway, and then a bell-shaped, perforated stupa. I had arrived with Bama, my longtime travel companion, and fellow bloggers Bart and Badai. All of us were repeat visitors to Borobudur, but none had yet witnessed the glory of a new day from its terraces.

The four of us sat on a ledge, awaiting the dawn with a small crowd of spectators. In time the sun rose over the slender cone of Merapi, Indonesia’s most active volcano, and its dormant neighbour Merbabu. Beneath a boundless sky bathed in pink and flaming orange, our surroundings gradually took shape. From this colossal mandala encrusted with spires, archways and elaborate bas-reliefs, I looked out in awe as the mist burned off the forest, the nearby hills and palm-fringed fields. To visit Borobudur a second time, nearly twenty years later, was to see it with new eyes.

Much has changed since those days. Indonesia is no longer led by a corrupt military dictator, but a humble, democratically elected ‘metalhead of state’. I am no longer a ten-year-old wishing to be an architect, but Borobudur inspires the same feelings of reverence and wonder. Now that I am older, it strikes me as being even more magnificent than I had ever recalled. 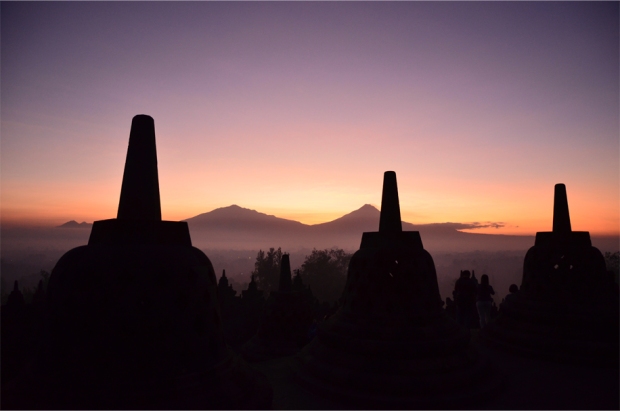 A new day dawns over Borobudur

Stupas hewn out of volcanic andesite

Sumbing, another active volcano, rises to the northwest 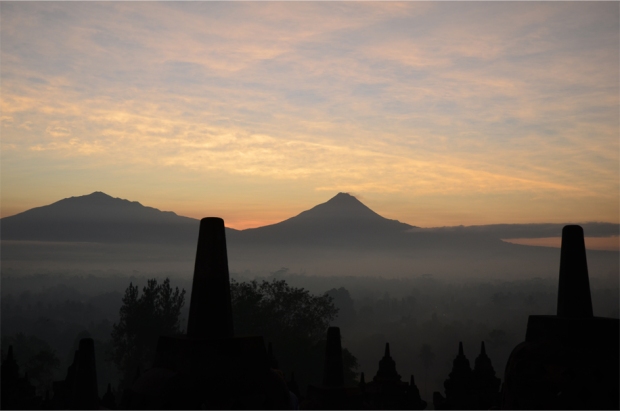 Temple silhouettes, with Merapi (centre) and Merbabu (left) in the distance

Mist on the Kedu Plain

Each stupa was built around an image of Buddha; this one has been exposed

More than a thousand years after it was completed (around 825 AD), Borobudur remains the world’s largest Buddhist temple. The structure is adorned with 504 Buddha statues and more than 2,600 individual bas-reliefs, depicting the biography of the Buddha, his former lives, and everyday scenes in eighth-century Java. Today Borobudur is still used for its original function; once a year, thousands of monks and pilgrims converge on the monument to celebrate Vesak, commemorating the birth, enlightenment and death of Gautama Buddha.

Buddhists and Hindus believe in samsara, an endless cycle of rebirth, and Borobudur has undergone a physical rebirth of its own. Motivated by the threat of collapse, conservationists dismantled it stone by stone between 1975 and 1982 in a large-scale restoration. Each block was meticulously catalogued and cleaned, the foundation stabilised, and a modern drainage system installed. By the early nineties, after the renovation was complete, the temple was inscribed as a UNESCO World Heritage Site. But Borobudur wasn’t always as celebrated. For centuries the monument lay hidden and overgrown, neglected under layers of volcanic ash from nearby Merapi.

Sacred geometry on the upper terraces, which represent ‘Arupadhatu’ 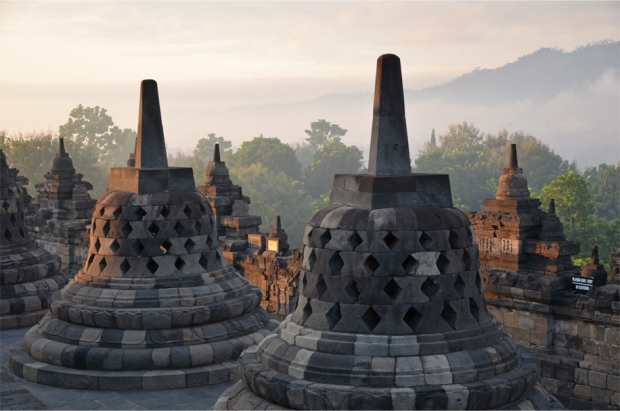 Arupadhatu (the formless world) is the highest realm in Buddhist cosmology

In search of solitude 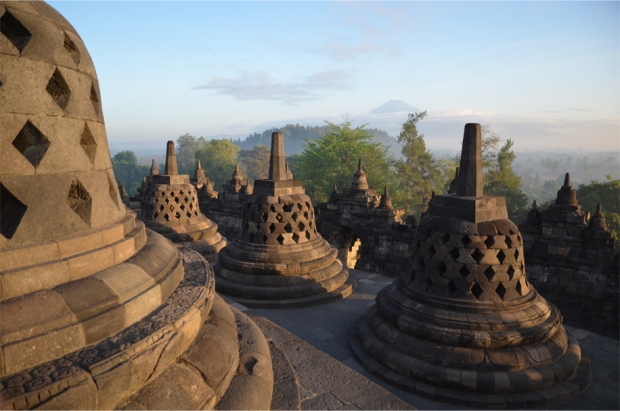 In 1814, during a brief period when the British ruled Java, it was Sir Thomas Stamford Raffles who brought Borobudur to the world’s attention. The governor had heard of a great monument that lay deep in the jungle of Central Java, and he tasked a Dutch engineer, H.C. Cornelius, to excavate the site. It took two months to remove the earth and hundreds of trees obscuring the temple, before its faded glory was finally revealed.

Even in its ruined state, Raffles regarded Borobudur and its Hindu counterpart, Prambanan, as “admirable as majestic works of art”:

“The great extent of the masses of building covered in some parts with the luxuriant vegetation of the climate, the beauty and delicate execution of the separate portions, the symmetry and regularity of the whole, the great number and interesting character of the statues and bas-reliefs, with which they are ornamented, excite our wonder that they were not earlier examined, sketched, and described.”

Borobudur is no longer cloaked in tropical foliage, but those words, for the most part, still ring true. And that same wonder that Raffles felt 200 years ago remains for all those who come, lingering in the stillness of dawn’s first light. ◊

Another shot of the famous Buddha at Arupadhatu

Bathed in the glory of the sun

The middle section of Borobudur, symbolising ‘Rupadhatu’ (the world of forms) 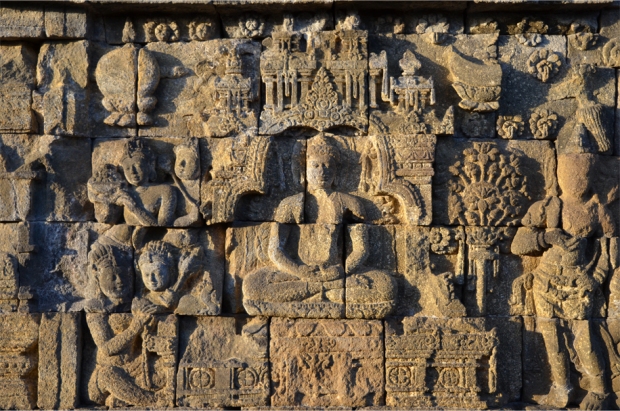 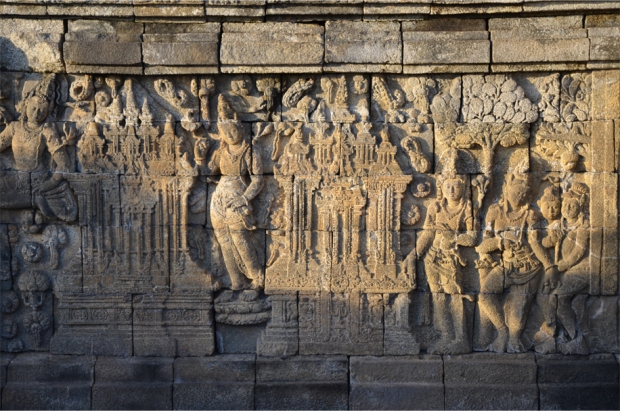 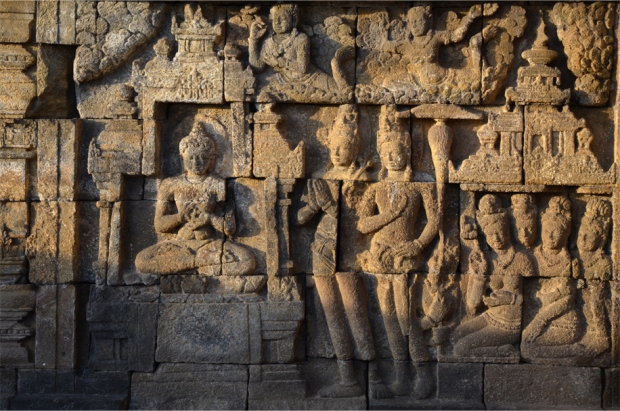 Paying homage to the Buddha 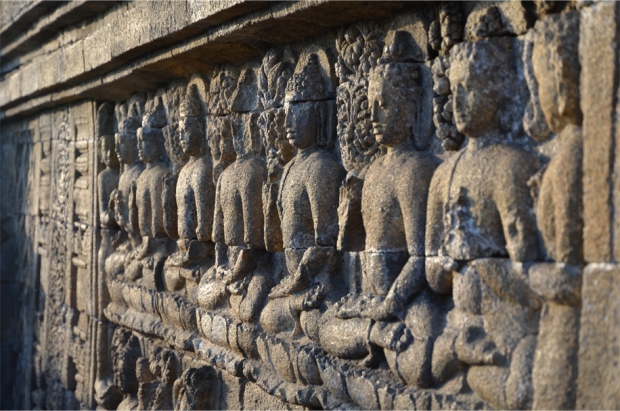 Dwarfed by the central stupa 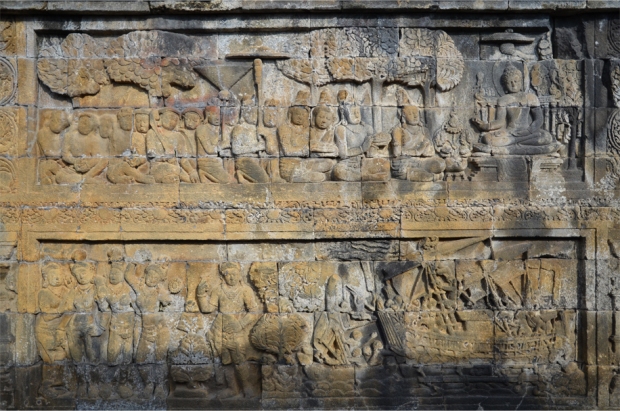 The ship forms part of an elaborate bas-relief

Fill in the blanks

Finding a niche in ‘the world of forms’

Borobudur as seen from its base, which represents ‘Kamadhatu’, the world of desires 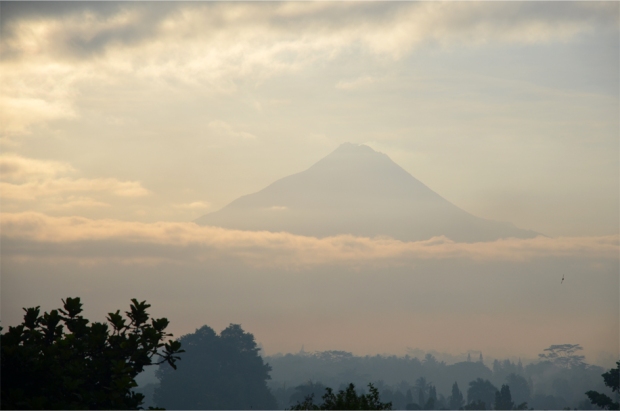 The smouldering cone of Merapi