Batujaya: A “Quack Escape” from Jakarta

Waking before dawn is about the last thing I want to do on a Saturday after a hectic work week, but the promise of going someplace new cannot be ignored. In my half-asleep state, it feels as though we are preparing to flag down a taxi to the airport for an early morning flight, except that this time we leave with no backpacks or suitcases: just our camera bags slung over our shoulders and two bottles of water. This admittedly crazy plan, hatched just the week before, was Bama’s idea. Neither him nor I had left the greater Jakarta area since early March, and we were eager to hit the road for a short excursion into the countryside of West Java. Our destination? A village called Batujaya, home to ancient red-brick temple ruins even older than Borobudur.

The journey we’re about to undertake will transport us from 21st-century Indonesia to the country’s distant past. Driving eastward out of the city along the eight-lane Jakarta–Cikampek Toll Road, Bama and I are greeted by a dystopian vision made even more bleak in the morning haze. Towering right above us is the deck of a recently inaugurated elevated highway, flanked by the concrete piers of two large-scale infrastructure projects still in progress. The first is the much-awaited LRT Jabodebek, a mass transit system connecting downtown Jakarta with several suburbs to the south and east. On the opposite side is a China-financed high-speed rail line that, when completed in a few years’ time, will be the very first in Southeast Asia.

It’s just after half past six when we turn off the toll road into a rest area to grab some breakfast. This one has the usual fast food and coffee shop chains: Starbucks, KFC, Burger King, A&W, and popular Indonesian brands like Solaria, which Bama favors for its spicy stir-fried rice vermicelli. But the only outlet doing business at such an early hour is Soto Kriuk, where we both opt for a comforting bowl of rice in a clear broth, with thinly sliced beef, beansprout, chopped celery, and fried shallot, alongside crunchy pieces of deep-fried chicken skin.

Less than 10 minutes’ drive down the highway lies Cikarang, an unremarkable town whose sprawling industrial estates are filled with factories by the likes of Unilever, Samsung, and Mitsubishi. From here, the road to Batujaya appears to run through a never-ending town. We pass houses both large and small, convenience stores, hole-in-the-wall eateries, mosques with colorfully patterned domes, auto workshops, and ramshackle street markets. Occasionally, there are swathes of rice paddies glimmering in the sun. A blue truss bridge cuts through a grove of banana trees and soars over the caramel-brown waters of the Citarum River, which marks the western border of Karawang regency (a subdivision roughly equivalent to an American county), where Batujaya is found. Finally, at 20 minutes to nine, we arrive at a modest museum a stone’s throw from the temple ruins. Judging by the absence of cars and motorbikes in the parking lot, we’re the first visitors of the day.

Ducks in a row 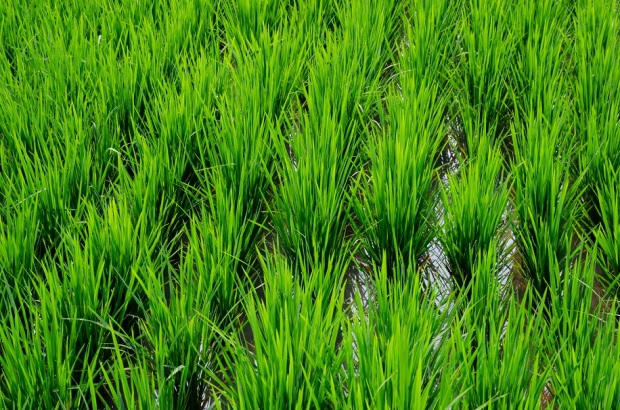 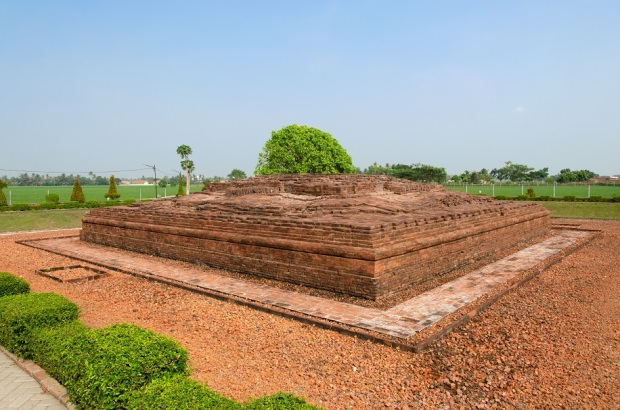 The remains of Candi Jiwa

A hibiscus flower on the temple grounds

Bama and I waste no time in treading an unmarked path toward two of Batujaya’s temples. We’re momentarily distracted by something we don’t ever see in Jakarta: a flock of ducks wading through the marshy landscape and preening themselves on a dry patch of grass. These free-range birds are employed as natural pest control in the rice paddies. As we approach, the ducks instinctively regroup into single file, before marching off through a small gap in the netting on the edge of a neighboring field. The sight and sound of these social animals reminds Bama of his childhood growing up in a small city amid the mountains of West Java. “Every morning when I was at home, I’d hear the quack quack quack of ducks on the road in front of our house. This farmer would herd them with a flag or a cloth on the end of a bamboo pole.”

We step onto a cement pathway raised above the iridescent paddy fields. A passing farmer with a sickle at his waist eyes us curiously, then ambles down an earthen embankment in his rubber boots. “Karawang is the rice basket of West Java,” Bama says. Later research would show that on a regency level, Karawang remains the second-biggest rice producer in the entire country. The rise of human civilization is closely linked to the development of agriculture, and West Java’s fertile volcanic soil – coupled with an abundance of water – allowed its native Sundanese people to flourish. Discovered in 1984 by local archaeologists, the temple ruins at Batujaya are some of the few vestiges of Tarumanagara, an Indianized kingdom that existed here between the 4th and 8th centuries. Its name and that of West Java’s longest and largest river, the Citarum, share the same root: an indigo plant still known today as tarum, and often used as a natural dye for textiles all across Indonesia.

Tarumanagara was responsible for the earliest known inscriptions – written in Sanskrit using the South Indian Pallava script – ever found in Java, and the red-brick structures uncovered at Batujaya are the oldest surviving temple ruins in all of Indonesia. This ancient Sundanese kingdom was actively involved in conducting maritime trade between India and China; historical records from the Sui and Tang dynasties reveal that Tarumanagara, rendered phonetically as To-lo-ma, sent emissaries to the Chinese emperor in present-day Xi’an.

The exact location of Sundapura, the Tarumanagara capital, is still a mystery. Experts posit that the seat of power was somewhere in the greater Jakarta area, likely beneath the eastern suburb of Bekasi. In a way, it is oddly poetic how the heart of Indonesia’s first recorded kingdom roughly corresponds to the capital of the modern republic. Batujaya, on the other hand, was an important religious center whose actual name remains unknown. Indonesian archaeologists have so far identified at least 46 temple sites in the area, buried under earthen mounds rising from a pancake-flat landscape covered in rice fields, a geographic feature local people call unur. Only a small handful of unur were recently excavated; these yielded long-lost buildings built of rust-red bricks that used a mixture of clay and rice hulls.

Candi Jiwa, literally “soul temple”, is the first of three ruins we visit. Like the other ancient structures at Batujaya, it faces northeast, oriented precisely at an angle of 50 degrees from due north. Enough of the Buddhist stupa has survived to give historians precious clues: the upper portions were clearly designed in the shape of a lotus, and it’s thought that a Buddha statue once sat at its apex. But Bama and I are most excited to see Batujaya’s largest temple, Candi Blandongan. Much to our disappointment, the only gate is padlocked, with the word “CLOSED” written on a piece of wood slotted between the iron bars over the entrance. A nearby sign suggests the complex is only open from Mondays to Fridays, which doesn’t make sense for any historical attraction. “Do they actually want people to visit?” Bama growls in frustration. From the pathway, we descend to a nearby embankment, looking for an alternative way to get closer to the ruin. In desperation, I briefly mull climbing over the short fence while no one is looking. 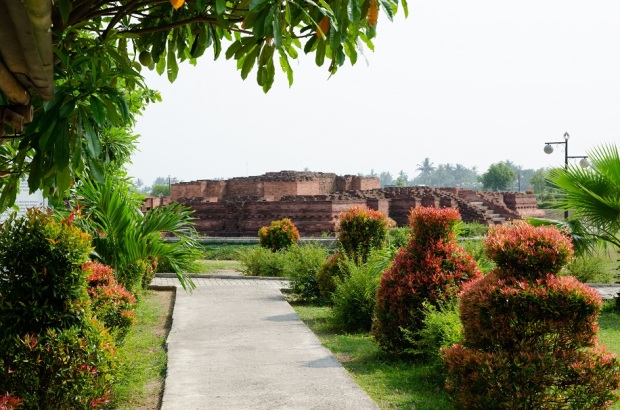 The well-kept grounds of Candi Blandongan, seen through its locked gate

Lines on the temple and in the surrounding landscape

Like Borobudur, Candi Blandongan hosts ceremonies during the Buddhist celebration of Waisak 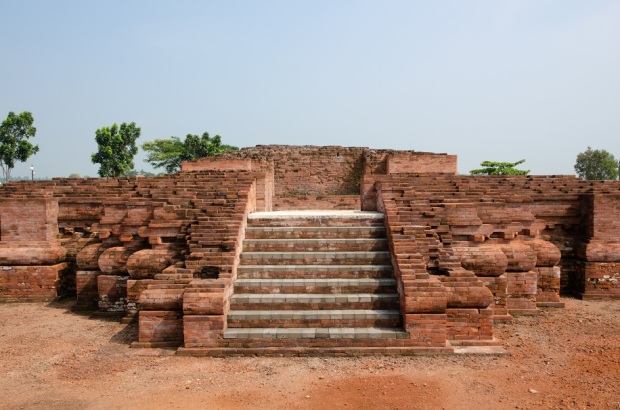 Vestiges of one of Indonesia’s oldest known kingdoms

Plaster still covers some of the bricks at Candi Blandongan

It turns out we aren’t the only ones who are deeply interested in Batujaya’s ruins. Off in the distance, I spot a group of eight or nine men we’d passed on the short stroll between Candi Jiwa and Candi Blandongan coming closer and closer. “Maybe they’re with someone who has the key,” Bama says. Sure enough, a barefoot staff member among them frees the padlock and an attached chain from the gate with a few quick motions. Most rules here in Indonesia are regularly bent or even willfully flouted (cue the common sight of motorcyclists driving down the wrong side of the road), but while that disregard for rules and order can be frustrating on a day-to-day basis, we’re grateful the temple caretaker is willing to make an exception for us rare visitors from out of town. “Weekends are usually [our] holidays,” he says matter-of-factly.

The impressive ruined structure we’re about to see is more than 1,300 years old. Once hidden beneath a hump of red soil overgrown with banana trees and thick foliage, Candi Blandongan was gradually uncovered between 1992 and 2000. Bama points out splashes of white – original 6th- or 7th-century plaster – on the lower portions. Other traces of the material have led archaeologists to deduce that Candi Blandongan was once crowned by a round stupa about six meters (20 feet) across, which would have made for a striking sight on this sprawling coastal plain.

Bama and I slowly circle the monument, taking in the color and simplicity of its ancient brickwork. By now, the sun’s heat is beating down on us with surprising intensity. Beads of sweat are gathering on my brow, and I notice the exposed skin on my forearms beginning to turn a faint shade of ruddy pink. This bucolic landscape of rice fields is proving even hotter than Jakarta’s concrete jungle. Thankfully, it takes us less than 10 minutes to retreat to Batujaya’s small museum and information center. In the center of the main hall lies a raised glass-topped case with a complete skeleton, half-buried in earth; below it, bricks from Candi Jiwa have been roughly assembled into a small stupa on the tiled floor. Display racks lining the walls showcase other artifacts like ancient coins, shards of Chinese ceramics, more human bones, and most notably the head from a black stone image of the Hindu god Vishnu.

After tending to a gaggle of schoolkids, the museum’s elderly caretaker strikes up a conversation with Bama, who asks why the sites we’d just visited were closed on weekends. “The temples are classified as a cultural reserve, not a tourist attraction, so people here work from Mondays to Fridays,” he replies. Before we leave, the custodian gives us directions to Candi Serut, our final stop just a short drive away, where three sets of ruins have been found mere meters apart. Two of them are little more than heaps of bricks; the more substantial main temple is partially submerged in a pool and tilted at a precarious angle. Scholars believe Tarumanagara’s rulers left the building unfinished, and why that was will most likely remain a mystery. ◊

The main temple structure at nearby Candi Serut