A love letter to Jakarta

Handa stared at me in wide-eyed shock. Over lunch in the basement canteen of our office tower, another young coworker had told us a month-long trip to Europe was an exercise in self-discovery. I quipped that Jakarta – and Indonesia by extension – was the place where I’d found myself.

“How could you find your soul in such a soulless city?”

She was not the only one perplexed at why I’d left a world of higher wages, landmark efficiency and the convenience of a seamless public transit system to come here. For Jakarta is a tough place, perhaps even unlovable at first glance. Any short-term visitor is immediately confronted with its infamous traffic snarls, the inescapable signs of environmental degradation and an astounding gulf between rich and poor, but Jakarta is anything but soulless.

Two months in, and I still find myself amazed by the vitality of this teeming megalopolis. The sultry air is tinged with a distinctly Indonesian entrepreneurial spirit, an observation shared by a childhood friend in Singapore, along with a former classmate who had also relocated to Jakarta. In this sprawling city of 10 million souls, you might find a jazz-themed chophouse and speakeasy bar named Prohibition, a gospel choir whose powerful singing transports you to the American south, or a musician-turned-chef giving Indonesian dishes the molecular treatment. After all, Jakarta isn’t just the political and commercial heart of the country – the thriving arts and culture scene, not to mention an environment that draws many of Indonesia’s brightest minds, is further proof that the city is also its intellectual centre.

Jakarta is typically the first Indonesian port of call for new ideas and technology from abroad. After being talked about for almost three decades, the first metro line (the MRT) is finally being dug beneath the city. At the initiative of a local environmental NGO, car-free Sundays have become a weekly tradition, opening up otherwise traffic-clogged downtown streets to cyclists, weekend runners, rollerbladers, street performers and those in search of a morning stroll.

Jakarta’s National Monument (Monas) in the centre of Merdeka Square

Bridging old and new at the National Museum 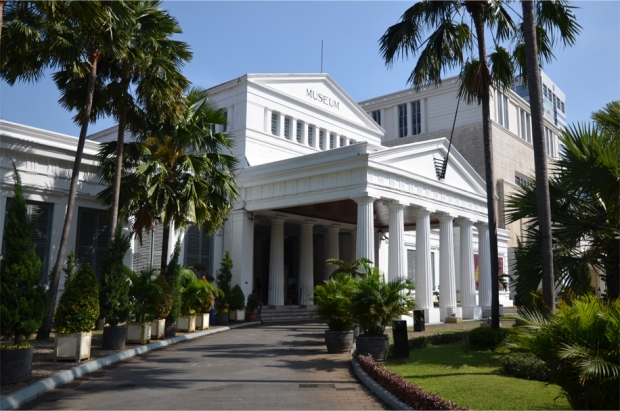 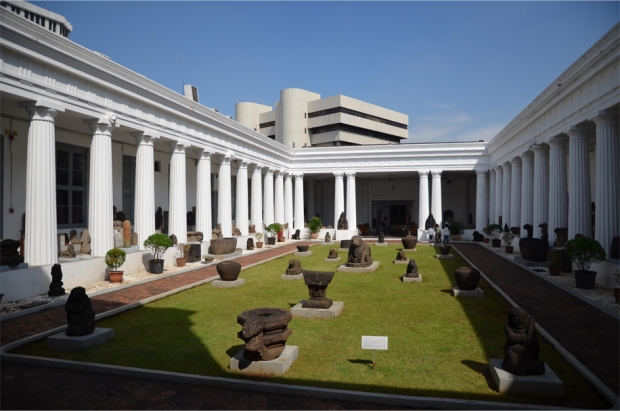 Ancient sculptures in the colonnaded courtyard 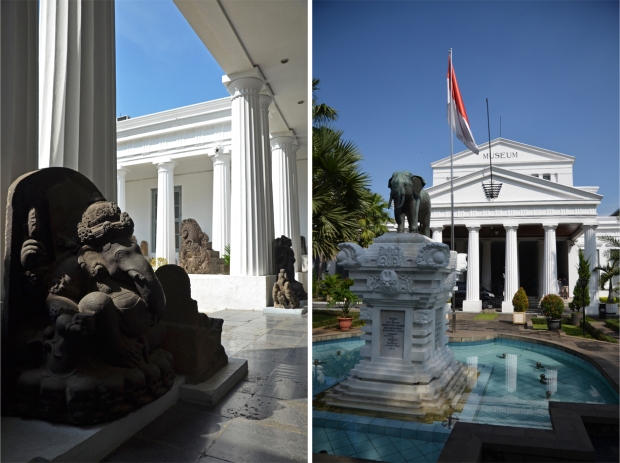 Inside the main hall of the Jakarta Kota Station, an Art Deco edifice 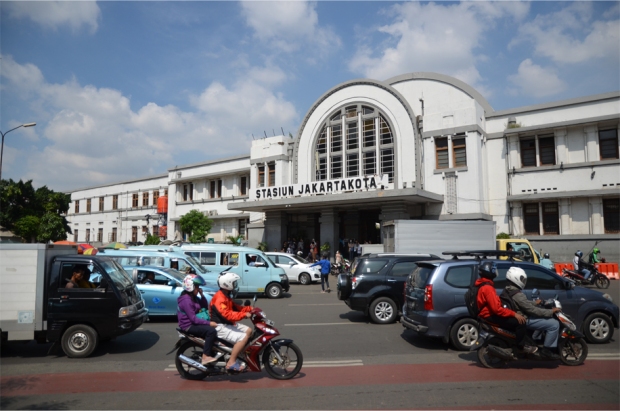 While the MRT is still a few years from completion, TransJakarta buses, with dedicated lanes and a flat fare across the city-wide network, are a reliable way of getting around. I had my first ride the day after my arrival, but it wasn’t until last weekend that I hopped aboard for a second time to visit the National Museum with Bama. The neoclassical old wing housed an impressive collection of Hindu-Buddhist artifacts: a guardian lion from Borobudur, a colossal statue of a West Sumatran king depicted as the Hindu deity Bhairava, alongside many examples of lingam and yoni (incidentally, Indonesia’s soaring National Monument in neighbouring Merdeka Square is a modern interpretation of a lingam-yoni). Bama and I spent several hours browsing the galleries before heading north to Kota Tua, Jakarta’s picturesque old town.

On my last visit four years earlier, Kota Tua was largely rundown and unloved, but a large-scale revitalization project has since brought new life to the area. That much was evident on Fatahillah Square, where visitors in wide-brimmed sun hats wheeled across the flagstones on bicycles painted in shades of neon. Gedoeng Jasindo, once a roofless, crumbling ruin, had been completely restored with its name proudly displayed in bold Art Deco lettering. The surrounding streets thronged with activity: we strolled past independent coffee shops, painters selling their creations, and saw a legion of food carts lined up beneath an arched metal canopy.

“How about dim sum for dinner?” Bama gave me this proposition soon after we returned home. The last time I ever had dim sum was the day I left Hong Kong, a farewell meal with old friends before catching my afternoon flight to Jakarta. But this was altogether different from the no-nonsense, tightly-packed conditions of that particular meal. Instead I was sipping a lychee-flavoured cooler from a jar, nibbling on spring rolls stuffed with mozzarella and har gau, the steamed shrimp dumplings that remain a fixture of my childhood memories. One end of the red-brick restaurant was open to the street, and on shelves decorated with jars and Chinese teapots, small candles flickered in the breeze. Behind a glass screen, the occasional breath of flames leapt up as the chef vigorously shook his wok.

I recalled dining at a trendy Indonesian restaurant in Hong Kong with the same sort of kitchen, where you could see the chefs grilling ludicrously expensive satay from the comfort of a heavily-cushioned booth seat. It was a poetic moment when the memories of my hometown and the experience of my newly adopted home city suddenly coalesced – and an affirmation that Jakarta was the right place to be. ◊ 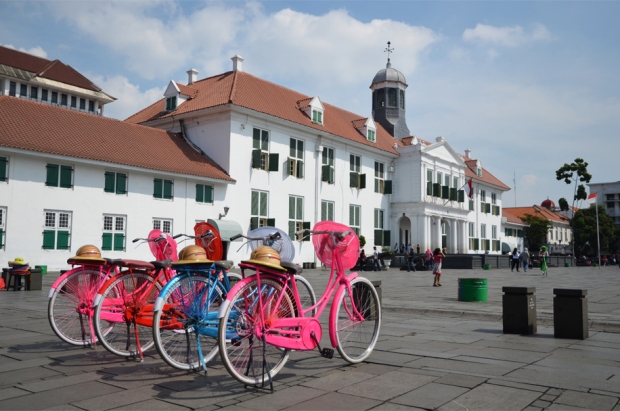 Nasi campur (a mixed platter with rice) at Cafe Batavia 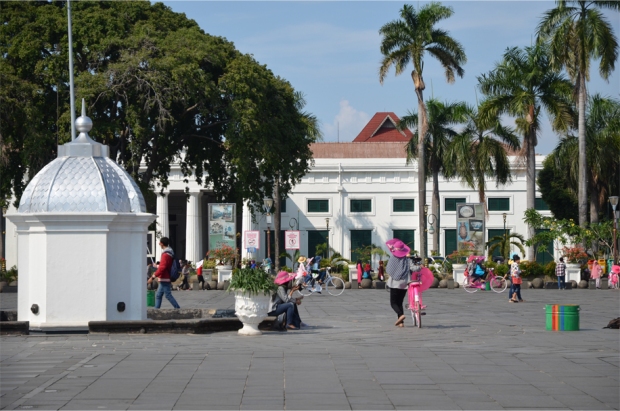 A slice of Europe in Indonesia 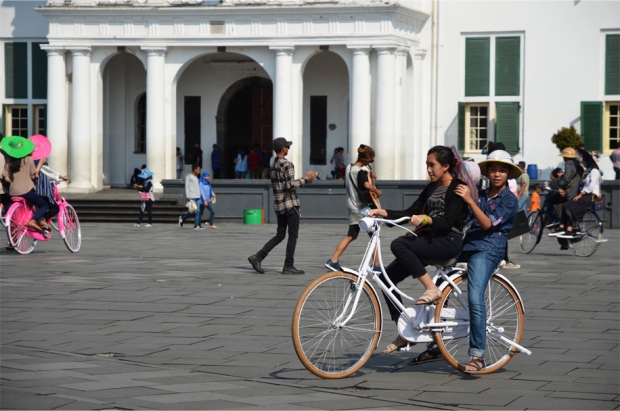 The Welcome Monument, a symbol of the city

Looking down Jalan Sudirman in the central business district