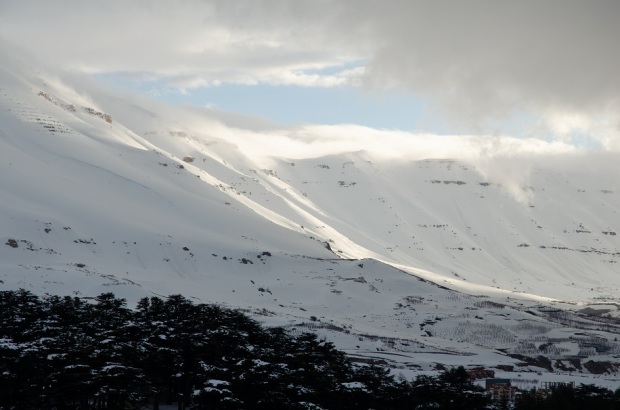 Wafik was late. “Sorry, sorry,” he said as we shook hands before piling our bags – and ourselves – into his roomy SUV. “Very bad traffic coming here.” Beirut might be somewhat infamous for its clogged roads and lack of public transportation, but having come from Jakarta, Bama and I felt very much at ease with the whole thing. Once on nearby Damascus Street, Wafik gestured to the barely-moving stream of vehicles stretching past the heavily fortified French Embassy and the National Museum. “I was stuck here for 20 minutes,” he explained.

A light drizzle streaked the windows. Soon, we motored onto the eight-lane highway heading northeast out of Beirut. The usual American fast food joints – KFC, Dunkin’ Donuts, Burger King – appeared on either side, and eventually the twin red-and-white striped chimneys of Zouk Power Station hoved into view. Practically hidden by billboards and a jumble of medium-rise apartment blocks, the broad sweep of Jounieh Bay was much harder to spot. I only realized we were in Jounieh when I saw the overhead cables of the famous Téléférique pulling ’60s-era gondolas up the vertiginous, pine-clad mountainside to the Shrine of Our Lady of Lebanon. Eventually, at the seaside town of Chekka – dominated by a hulking, dystopian cement factory – we turned away from the densely populated coastline, breezing past an enormous quarry, terraced hillsides, expansive olive groves, and clusters of nondescript concrete buildings interspersed with tile-roofed houses in honey-colored sandstone.

The narrow, meandering road took us up and up into the Mount Lebanon range, where a thick blanket of fog obscured all but the nearest details. Signboards announced the names and elevations of villages we passed through in both Arabic and French: Tourza – 760 meters; Qnat – 1,020 meters; Qnaiouer – 1,390 meters; and now, Hasroun – 1,600 meters. But where was the snow? I wondered. Wild grasses and shrubs still thrived on the stony slopes. Wafik fearlessly navigated a series of hairpin bends and stretches of asphalt with precipitous drops on one side, barely cloaked by the gloom. Then, as the fog lifted in a brief window of clarity, we finally saw a snowcapped summit looming above the next village. Bama turned to me with an enormous grin; he had previously observed the Himalayas from afar in both Nepal and Bhutan, but this would be his first close-up experience with the white powder.

What unfolded next was almost too dreamlike, too surreal to be true. By then, the low clouds had dissipated just enough for us to behold the UNESCO-listed Qadisha Valley, where multiple waterfalls tumbled down a sheer cliff face into a verdant chasm dotted with Catholic monasteries. Wafik motioned to the town clinging to a mountain flank on the far side of the canyon, its skyline dominated by several red-tipped church steeples. “Bsharri village. That’s my country.”

We rounded the head of the Qadisha Valley and entered Bsharri, momentarily plunging into the darkness of a short, curving tunnel, then twisting around several switchbacks as the fog closed in once more. Small patches of powder by the roadside gradually gave way to larger and larger snowdrifts, until they grew even taller than our SUV. Now, watching Bama’s face light up with childlike glee, I recalled spending my very first white Christmas in Hokkaido, Japan – where I learned to ski – and another Christmas several years later in suburban Toronto, when my siblings and I pelted each other with snowballs inside the parking lot of Frankie Tomatto’s, an all-you-can-eat “Italian” restaurant that would infuriate any true-blue Italian. “I knew I was going to see snow here,” Bama said, barely containing his excitement as he peered out the window. “But not this much!” 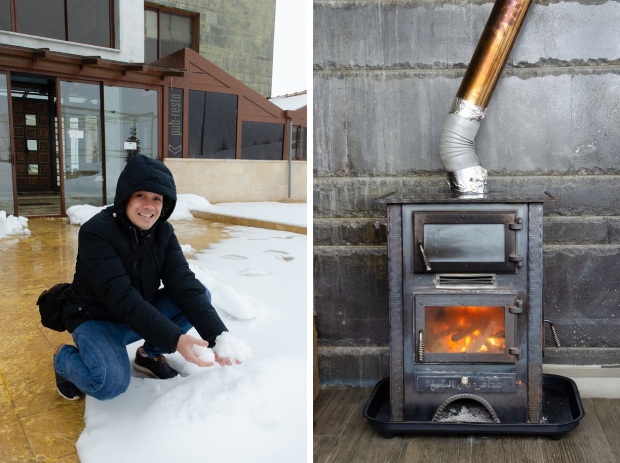 A foggy afternoon at Al Arz 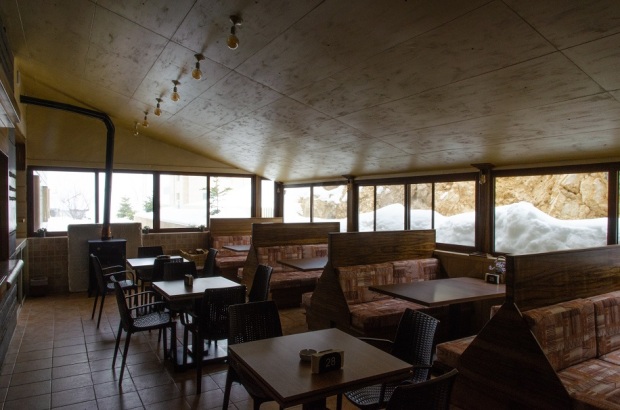 An overview of the dining area

Inside the central lounge; the hotel’s cozy “living room”

Two hours and 15 minutes after leaving Beirut, we rolled into the ski village of Al Arz (The Cedars). Here, cocooned in fog roughly 2,000 meters (or 6,500 feet) above the Mediterranean, the snow appeared infinite; it was hard to tell where the wet powder ended and the sky began. Wafik momentarily looked into the rearview mirror. “Because this is your first time,” he said to Bama, “I will park on the snow.” And so he did, laying down fresh tire tracks as we came to a stop at White Cedar Hotel & Resort. I opened the door and stepped out onto a layer of powder a few inches thick, with a perceptible crunch underfoot. It was far colder than rainy Beirut. I looked over at Bama to see him wide-eyed in wonder, absorbing the sensation of snow falling on his uncovered hands and the sleeves of the padded down jacket he’d bought the night before leaving Jakarta.

Arriving on a Tuesday afternoon, it seemed as though we were the only ones staying there. Neither of us minded that our smallish room had a desk but no place to sit; just a few steps down the corridor, a set of double doors led to a central lounge with multiple nooks and a small collection of reading material. Bama sat down for a closer look at the front cover of a thick, illustrated volume, using his knowledge of the Arabic alphabet to decipher the title – and discovering that it mirrored the Indonesian words for “wonders of the world”: ajaib dunia. Tucked behind the lounge, an empty restaurant had been simply furnished with booth seats and a long counter running down one side, presumably for the breakfast buffet. We sat down in the unheated space while bundled up in our thick jackets, savoring the crisp, invigorating cold that would have been unthinkable back in steamy Jakarta. In time, a man with a kind, deeply furrowed face appeared. He spoke almost entirely in Arabic and motioned for us to follow him. “Stove, stove,” he said.

The man guided Bama and I to a small room that lay just off the reception. In the absence of other guests, it almost felt like our own secret lair. Soft, diffuse light flooded in from the windows running along two sides; below a colorful clock centered on a print of Big Ben, built-in sofas with throw pillows had been arranged around a sturdy coffee table. And just as we’d been told, a cast-iron wood-burning stove had been lit, the flames blazing a vivid orange behind a glass screen. Bama and I were famished. Luckily for us, the menu here offered Lebanese mezze as well as international comfort food: including a generously portioned fettuccine alfredo (our option for dinner the very next day), burgers with thickly cut fries, plus several kinds of homemade pizza. We ordered our meals at the front desk and settled in for a late lunch, watching the snow falling quickly at first as icy pellets, before slowing down to dance in the air as larger flakes.

Our first few days in Lebanon had been dogged by work-related loose ends that I’d been unable to tie up in Jakarta. Though we were on holiday, I had little choice but to spend early mornings and some evenings on email, ironing out the details of an impending assignment: negotiating with my boss and a photographer to confirm dates and prices, making sure all flights were booked, and contacting a restaurateur I was hoping to interview. Only on the morning of our departure from Beirut, to my immense relief, did everything finally fall into place.

I was looking forward to the simple pleasure of just being, of relishing the moment and not having a care in the world. Online reviews of White Cedar had warned of unreliable Wi-Fi, and in a way, that was just what I’d hoped for. I wanted nothing better than to unplug and disconnect entirely from the world of deadlines.

The kind-faced man eventually returned to serve us lunch. Just days before, it seemed impossible to think that we’d be enjoying a freshly baked pizza topped with local cheese and soujouk – a piquant Armenian-style beef sausage – in a room warmed by a crackling fire as snow piled up against the double-glazed windows. I couldn’t remember the last time I had felt such bliss, and for now, there was no other place I wanted to be. ◊

Snow in the Middle East

The waters of the Mediterranean reflecting the late afternoon sun

Folds of the Lebanese landscape

Cedars Church, just down the road from our hotel

The snowcapped peaks of Mount Lebanon emerge from the clouds 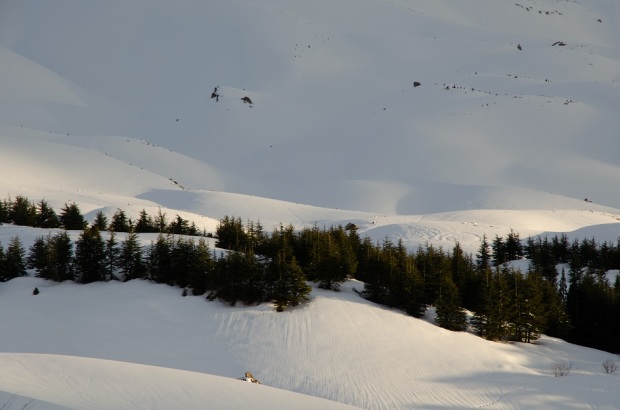 Catching the last glimmers of daylight