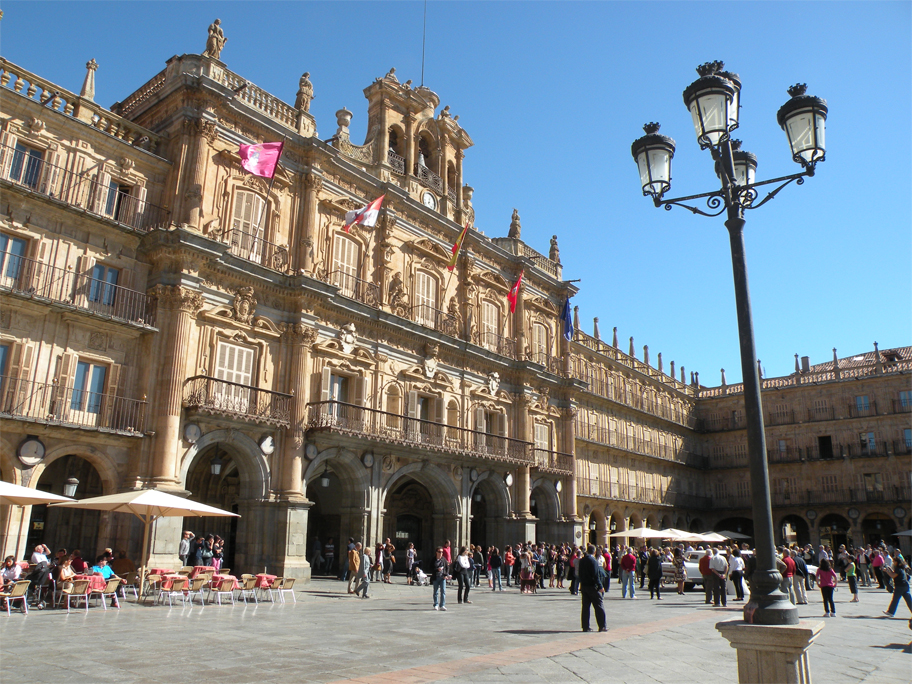 It’s 10am on a chilly Saturday morning and I am standing in the middle of Plaza Mayor, at the heart of Salamanca’s historic centre. Under a cloudless sky the morning light falls gently onto the carved stone facades and wrought iron balconies. Composed, elegant and lavishly decorated, it is the ultimate Plaza Mayor, easily besting the more famous one in Madrid.

Built on the orders of King Felipe V in the 16th century, the Plaza was used for markets and special events, especially bullfighting. On the north side the alcalde could watch the show from the balconies of the town hall, and on the east the King’s Pavilion was erected for visiting royal officials. This tradition continued well into the 1860s, when a purpose-built bullring was constructed outside the city walls. A hundred and fifty years may have passed since then, but the memories still run deep – it’s no accident that the main shopping strip leading from the square is named Calle Toro. 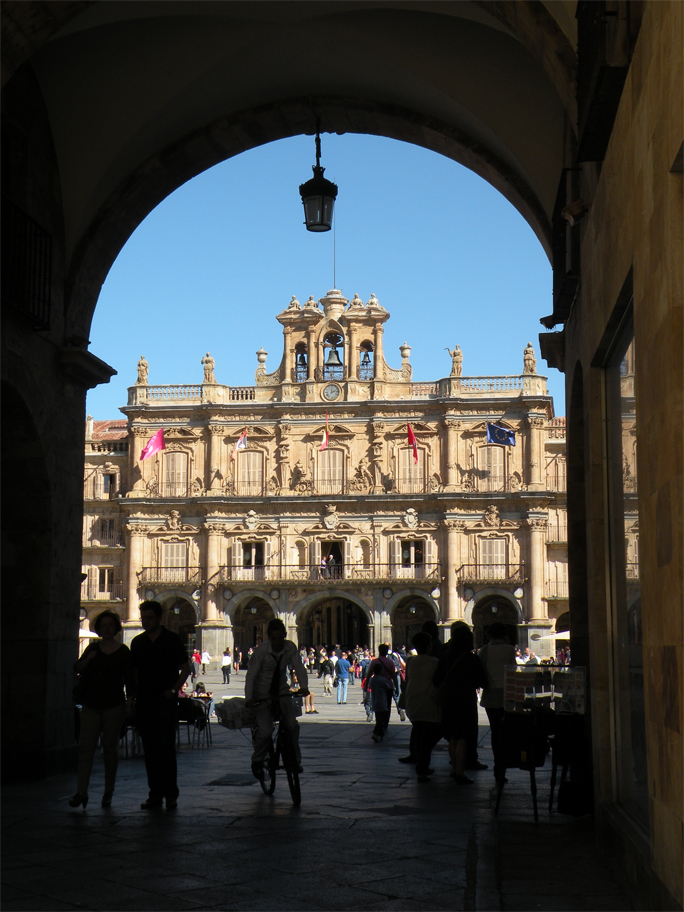 In 1988 the entire old city was declared a UNESCO World Heritage Site by virtue of its many architectural wonders. Apart from a rich variety of Romanesque, Gothic and Baroque monuments, Salamanca boasts the most comprehensive collection of buildings in the Plateresque style – a highly refined form of Spanish Renaissance architecture, meticulously carved in the manner of a silversmith.

What’s more, almost all the buildings are clad in warm golden sandstone quarried from the nearby village of Villamayor. In the bright Iberian sun, the stone facades glow with a dreamlike quality that is nothing short of spellbinding. For this reason Salamanca is nicknamed “La Dorada”, the Golden City. Though the historic centre maintains its radiance at all times of day, it is perhaps best seen in the hours before sunset. 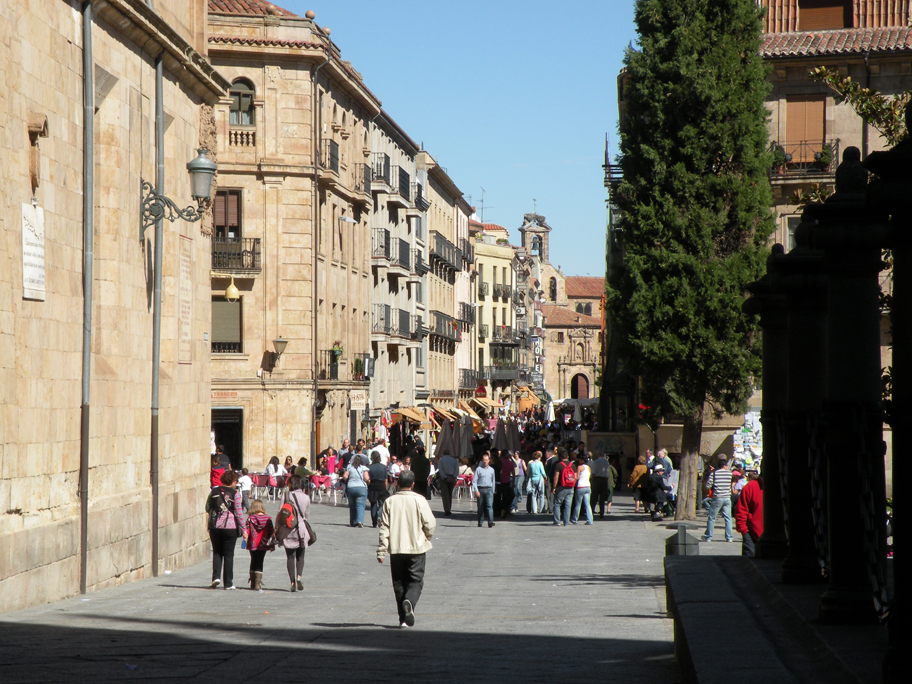 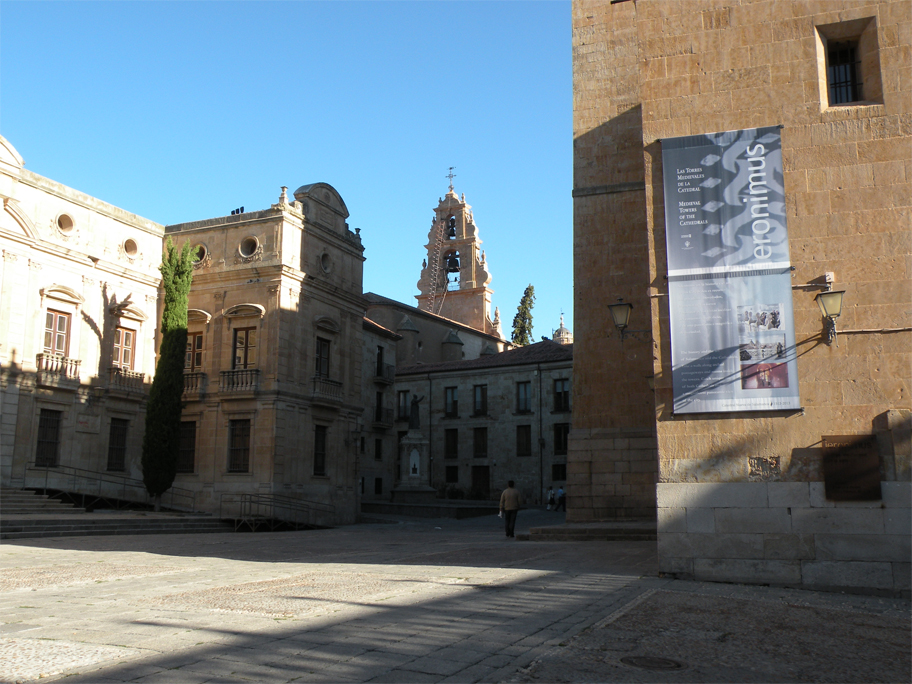 Unique among European towns and cities, Salamanca has the distinction of having a double cathedral. The Old Cathedral, a blend of Romanesque and Gothic architecture, dates from the 12th to 14th centuries. A small entrance fee is required but it is definitely worth it – once past the glorious frescoed apse be sure to check out the secluded courtyard and its adjoining chapels.

In 1513 construction began on the much larger New Cathedral next door; contrary to the popular practice at the time, the old one was kept intact and incorporated into the new building. To this day the two cathedrals share a common wall and a bell tower, at 92 meters the highest man-made structure in all of Salamanca.

At the entrance to the New Cathedral, don’t forget to look out for the astronaut and ice cream cone to your left. During the structure’s most recent renovation the stonemasons had them carved as a whimsical mark of the times.

For €3.75 you can climb halfway up the bell tower for spectacular views over the city. Lonely Planet ranked this spot the best place to see Salamanca from above, and it’s not hard to see why. To the north a terrace offers a jaw-dropping vista dominated by the spires of the nearby Church of La Clerecía; and to the south the old cathedral frames the view towards the river. At this level the differences between the two cathedrals become increasingly apparent: to your left you are faced with the soaring buttresses of the new church, and to your right a quirky Romanesque dome rises up with its fishscale roof. 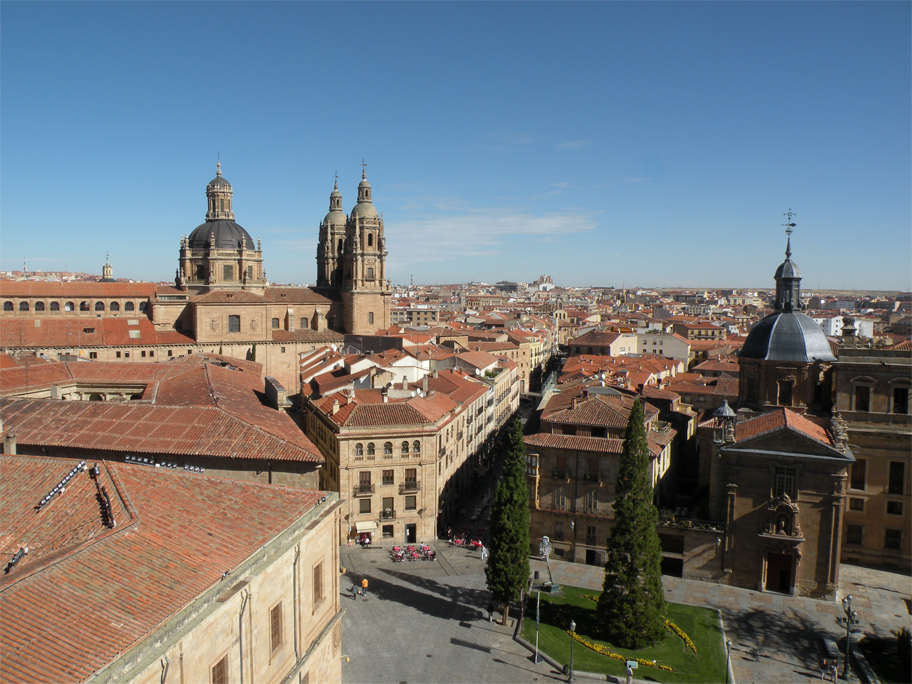 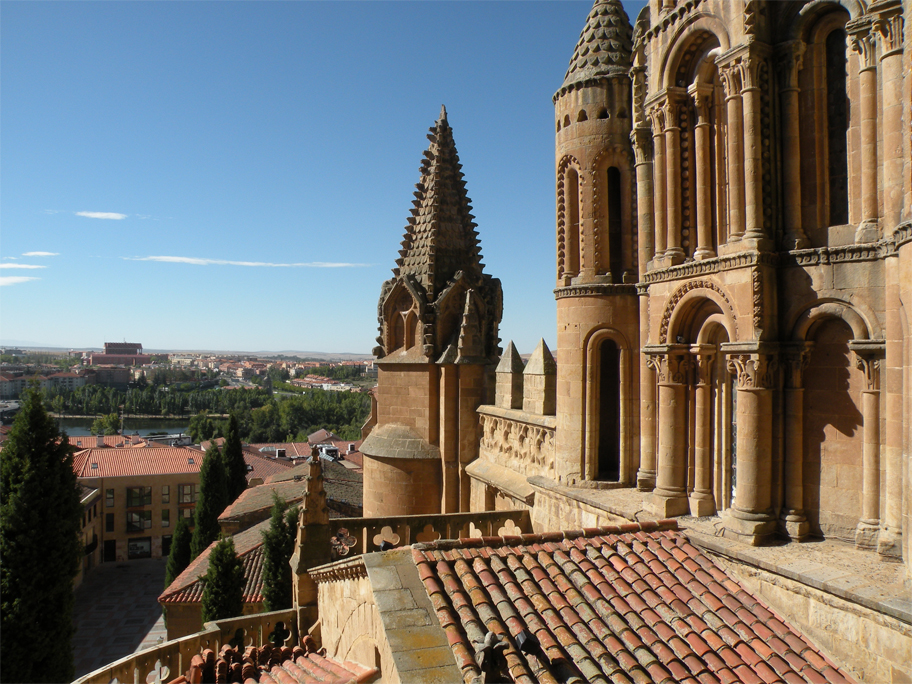 Walking down the hill from the cathedrals will inevitably take you to one of Salamanca’s oldest surviving structures. Spanning the River Tormes, the Puente Romano (Roman Bridge) dates back to a time when the city – then called Salmantica – functioned as a commercial hub of inland Spain. 15 of its 27 arches are original, while the rest were rebuilt after a devastating flood in the 17th century. At its northern end stands a pre-Roman verraco, a stylised bull sculpture erected by the Vacceos, the Celtic tribe who first founded the city.

Roughly halfway between Plaza Mayor and the cathedrals stands the Casa de las Conchas, an impressive edifice whose walls are decorated with more than 300 carved scallop shells. Now a public library, the building was formerly the mansion of the Maldonado family, headed by a knight of the prestigious Order of Santiago.

The scallop shell was a defining symbol of this order, and also of the pilgrims walking the Way of St James (El Camino de Santiago). Winding its way through Northern Spain, the camino terminates at Santiago de Compostela, the legendary resting place of the apostle St. James the Greater. Perhaps it’s no coincidence that an alternative pilgrimage route passes right by the house; known as the Ruta de la Plata, it follows the course of a Roman road which once crossed the Iberian peninsula from north to south. 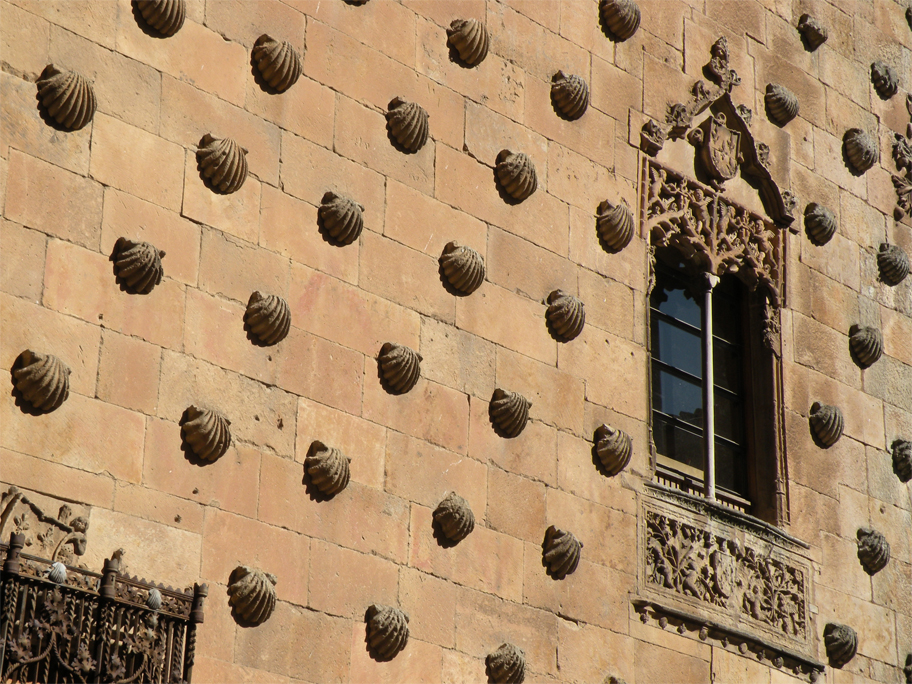 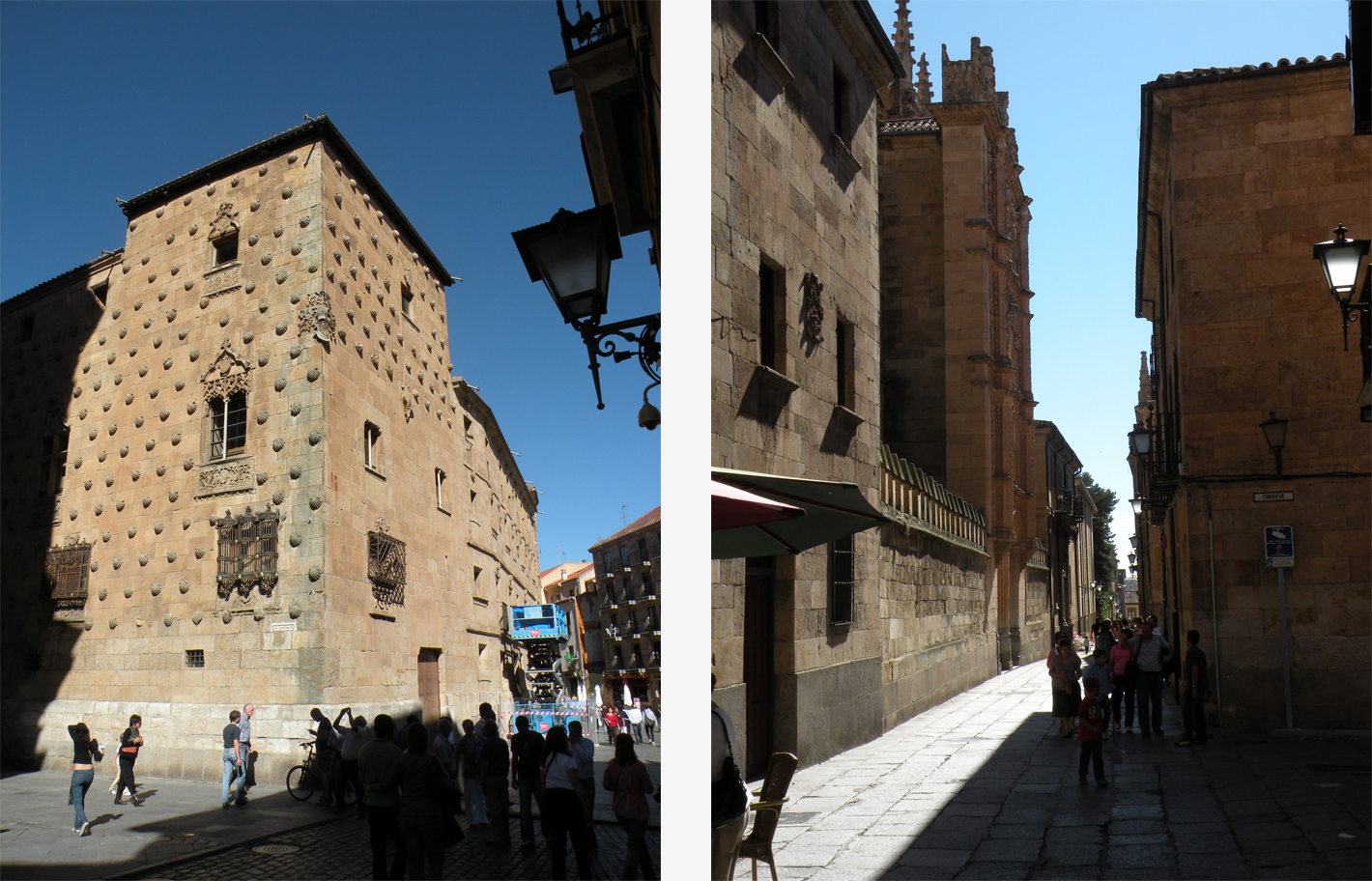 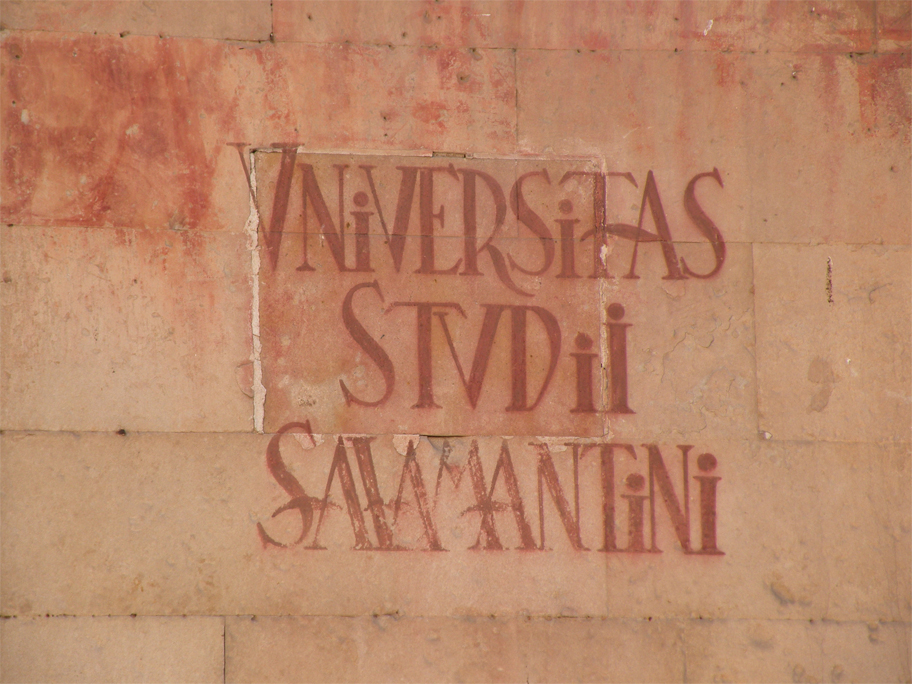 Aside from a wealth of architectural marvels, Salamanca is home to the oldest university in Spain and the fifth oldest university in the Western World. Founded in 1218 by King Alfonso IX of León, the Universidad de Salamanca soon became one of Europe’s most prestigious centres of learning. Illustrious alumni such as Miguel de Unamuno, Ignatius Loyola and Miguel de Cervantes once walked through its doors, and Christopher Columbus gave lectures here in the wake of his discoveries.

Professors at the University were also among the first to question the morality of New World colonisation, and it was these same scholars who pushed for legislation upholding the basic human rights of indigenous American peoples. In 1512 such ordinances were enshrined in Spanish law at the Council of Burgos, which called for “the good treatment of Indians” by settlers in the West Indies.

Among some groundbreaking articles prohibiting dangerous child labour and strenuous work for pregnant women, the Laws of Burgos decreed that “no person or persons shall dare to beat any Indians with sticks, or whip him, or call him dog, or address him by any name other than his proper name alone.”

It may have been the first ever international statement of human rights, but the sad truth is that few settlers adhered to the recommended code of conduct, resulting in the deaths of countless indigenous inhabitants. By 1517 the native population of the Spanish West Indies had been virtually depleted, and Spain became heavily involved in the Transatlantic Slave Trade. 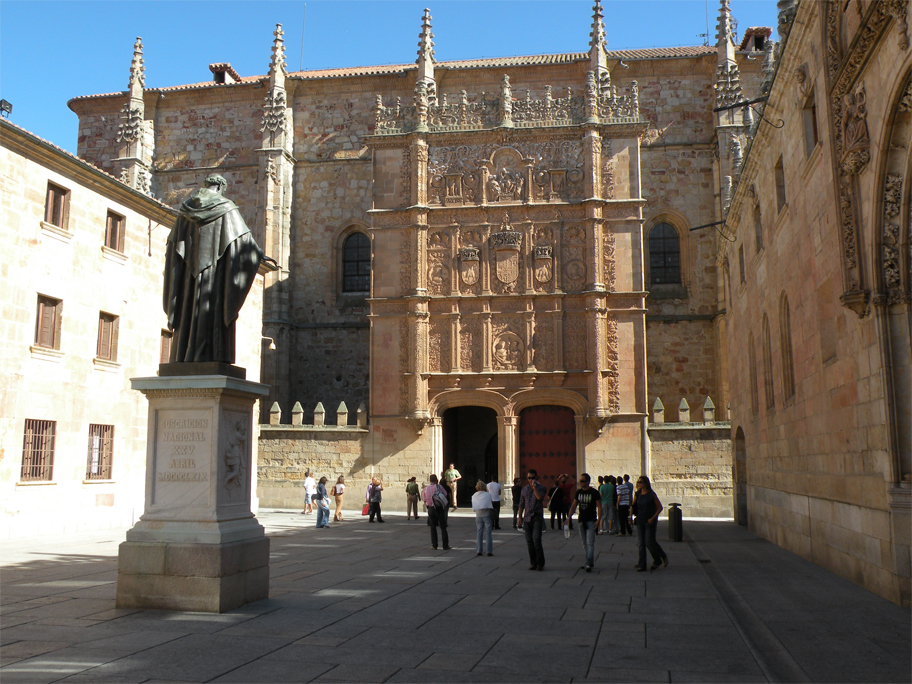 Contrary to what modern-day Europeans would now believe, religious figures were at the forefront of learning in the universities of the 16th century. One such man in Salamanca was Fray Luis de León, whose statue stands outside the main university building. At once a forward-thinking lyric poet, Augustinian friar and vice rector of the University, he was thrown into prison by the Inquisition for daring to translate the Song of Solomon, and for criticising the text of the Latin Bible used by the Catholic Church. After nearly 5 years of imprisonment in Valladolid, the charges against him were dropped and he was released with nothing more than a warning.

Upon his return to Salamanca, Fray Luis famously opened his first lecture with the words “As we were saying yesterday.…” Tradition has it that this sentiment was echoed 400 years later by Miguel de Unamuno, the influential writer and philosopher who also served as rector of the University. Like Fray Luis de León, he too was removed from his post and banished for 6 years until the fall of Rivera’s military dictatorship in 1930.

Facing the statue of Fray Luis is one of the city’s most famous attractions. Any visitor to Salamanca cannot leave without having looked for the elusive frog on the University façade; it’s said that those who can find it without any assistance will have a year of good luck. This is no easy feat considering the frog’s small size and the extreme level of ornamentation. The clue? Look for a skull. There are a number dotted around the façade, but one of them plays the frog’s lily pad.