Hong Kong for the holidays

When I moved to Indonesia last May, I promised my parents I would be back for Christmas. But it was a strange feeling to return to a place where I’d lived for nearly 20 years. Apart from a high-rise hotel taking shape on the Kowloon waterfront, and a handful of other construction sites, it appeared that my hometown had barely changed at all. A familiar routine kicked in soon after arrival: there was an appointment with my childhood dentist – who once gave me a (painless) root canal after I fractured a front tooth falling down the stairs – and then I picked up a Christmas turkey at the usual place. The waiter with thick-rimmed glasses who’d handed me the box of turkey a year ago recognised me at once.

Bama tagged along at my mother’s invitation, and I took him to try Spanish cuisine for the first time at a cosy restaurant in Wan Chai. We feasted on smaller versions of Basque pintxos, bite-size potato omelettes with a spear of grilled guindilla pepper, and the classic comfort food huevos rotos (“broken eggs” over fried potatoes), which swapped out ham for mushroom and truffle shavings. A gregarious American business traveller was seated at the table behind us, and he sought sympathy from the French maître d’ after bombarding her with questions about how and why she’d landed in Hong Kong. “It’s my first time in Asia,” he said. “I wanted to bring my parents along but they couldn’t come at the last minute. It’s lonely being by yourself at Christmas.”

Down the same street, my favourite Indonesian donut brand had just opened its first branch in Hong Kong. On our second day there, Bama and I had spotted it through the window of a passing bus, and the familiar sight of the illuminated lettering and peacock logo had taken us by complete surprise. I eventually bought a dozen for my sweet-toothed family members.

A postcard-perfect view from the Peak 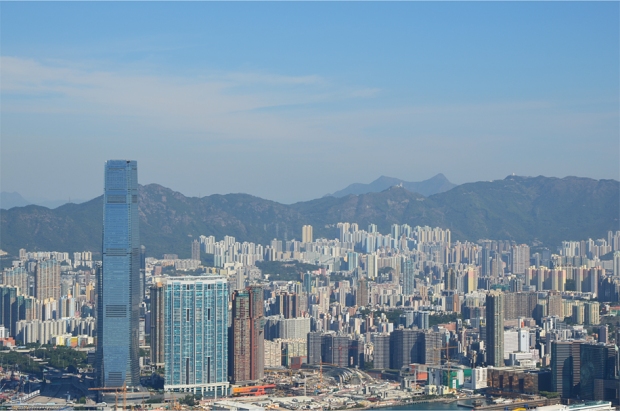 The skyscrapers of Kowloon, with Ma On Shan’s distinctive saddle just over the ridge 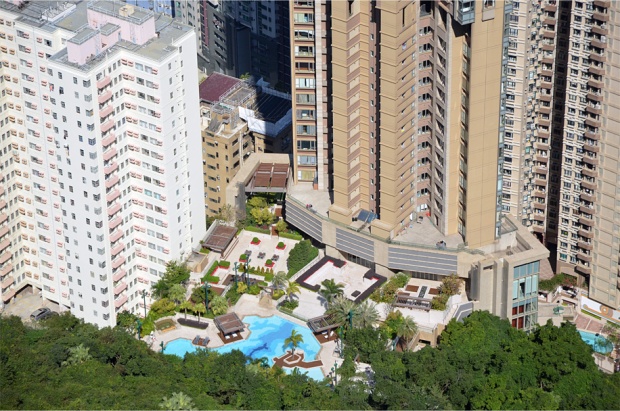 A resort-style pool for apartment-dwellers 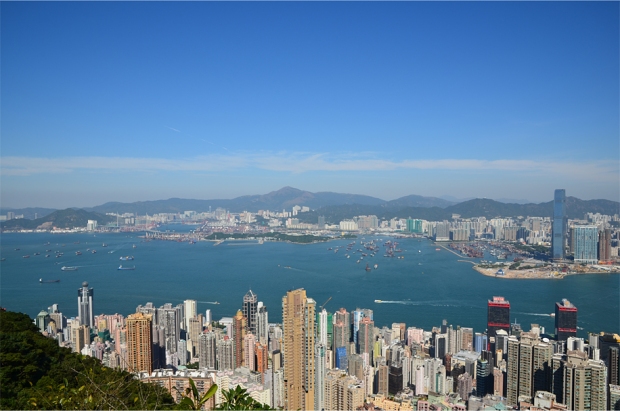 Looking towards the tip of Kowloon

Admiring the view from Lugard Road

The entire break was a period of nonstop eating, especially since an uncle and his family had just flown in from Toronto for the holidays. Christmas Eve meant a 10-course banquet at a Shanghainese restaurant, the one my grandparents had a penchant for visiting whenever special guests were in town. It was classic déjà vu – I’d dined here on a brief weekend trip in the middle of November, and the dishes chosen were practically the same. Two nights later my relatives would join us again for delicate slices of Peking duck, spicy Sichuan-style chicken, and other treats at a nearby venue my family had frequented ever since I was a child.

The day before we left, the thick clouds and winter haze finally lifted, revealing skies painted a glorious shade of blue. Bama and I decided to retrace some of our footsteps from January 2012, when we first met up in Hong Kong for a whistle-stop tour to see the highlights. He still laughs about it now, saying that he had to run just to keep up with me. It’s a sentiment shared by Jeff and Kristi from Planet Bell, who had the same experience when they stopped by a couple years back.

This time we headed to the Peak for a two-hour ramble, first to the lookouts along the morning trail (also known as the Peak Circle Walk), then a narrow road that led onwards and upwards, past some of Hong Kong’s most expensive real estate. Our goal was Victoria Peak Garden, site of the Governor’s summer residence in early colonial times and a magnet for families picnicking with their dogs, not to mention young couples in full garb for pre-wedding photos. We walked past the gate lodge – a whitewashed relic from 1902 that looked straight out of London – and discovered lawns dotted with flower beds and cast-iron gazebos. On the granite platform where the Governor’s mansion once stood, a simple pavilion afforded a sweeping vista over the hills and smokestacks of Lamma Island. 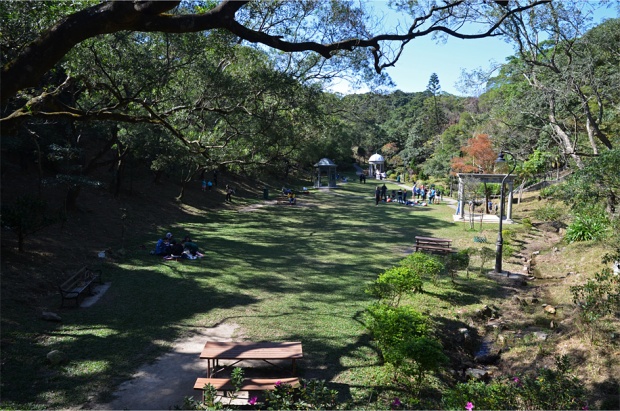 Soon-to-be newlyweds with a posse of photographers

Gazebos near the summit

Taking refuge from the midday sun 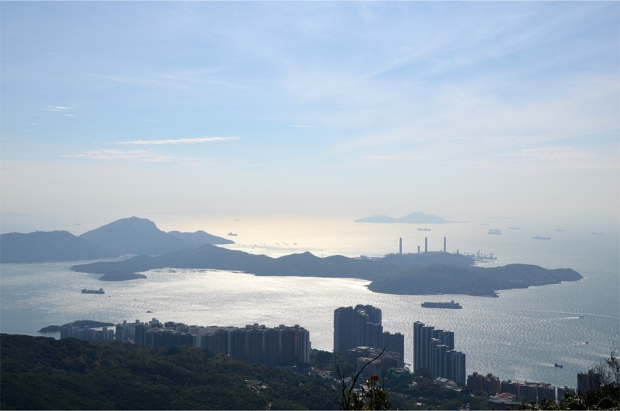 Lamma Island and beyond 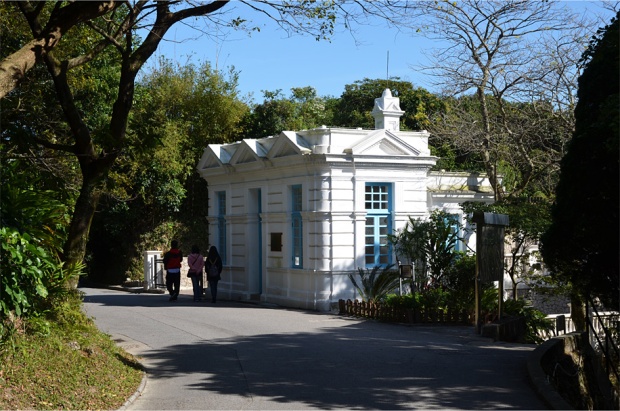 The original gate lodge from 1902

We descended back to town on a double-decker bus, and just like that cool January evening in 2012, made a beeline for a Japanese restaurant to wolf down plates of conveyor belt sushi. I’d enjoyed it several times in Jakarta, but my favourite item (scallop) was never available, while gunkan maki topped with buttery uni (sea urchin roe) proved equally elusive. By the time we finished our late lunch there was only one thing left to do: hop aboard the Star Ferry to Kowloon.

I’ve lost count of the number of times I crossed the gangplank to find a seat on the upper deck, with the waves rolling audibly beneath my feet. I’ll never forget that moonlit night in my early teens, when we hitched a ride in our best clothes to attend a classical music concert at the Cultural Centre – that peach-coloured monolith behind the old clock tower at the tip of Kowloon. But the journey has become significantly shorter than it was in those days, thanks to the past decade or so of land reclamation.

We disembarked on the other side, leaving the crowds at the ferry terminal to find locals and tourists alike filling the benches built into the promenade, as a stream of ships went to and fro across the waters – pleasure yachts, tugboats, barges, and a variety of vessels that offered hour-long harbour cruises. Bama and I stood marveling at the scene, with its backdrop of forested hills and a legion of glass-and-steel skyscrapers that glimmered in the late afternoon light. Although I’d spent most of my life in Hong Kong, this was one view that would never grow old. ◊ 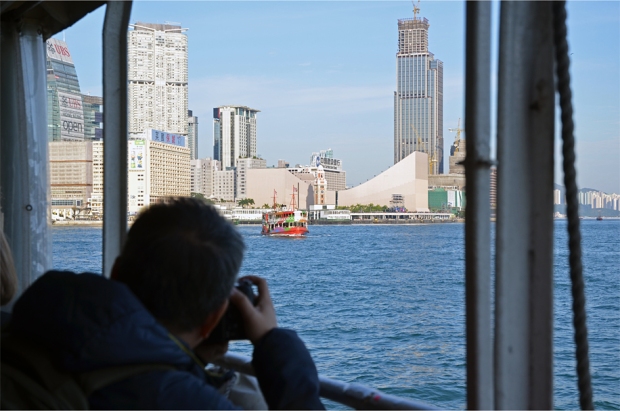 Aboard the Star Ferry to Kowloon 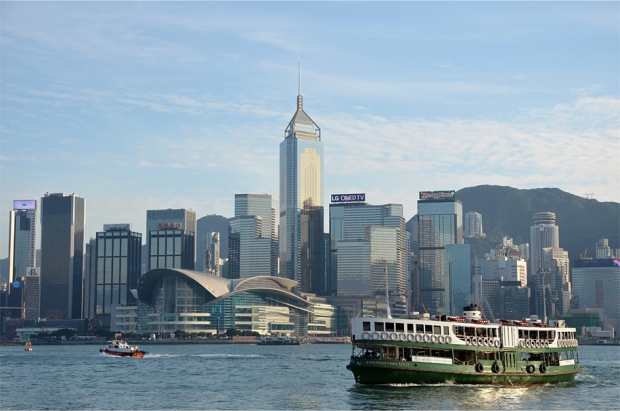 The beloved ferries have been plying these waters since 1888 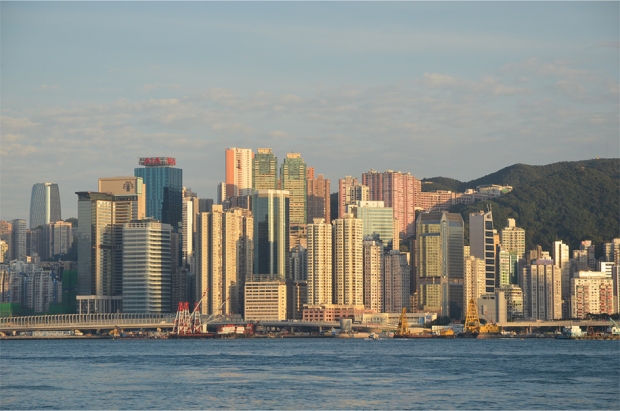 The neighborhood of Fortress Hill, down the slope from my old school 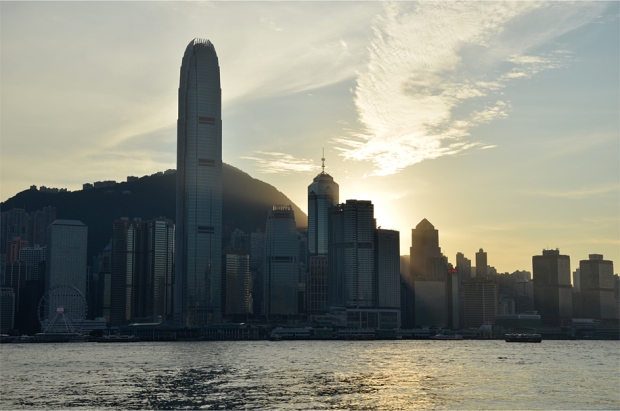 Manhattan on the South China Sea 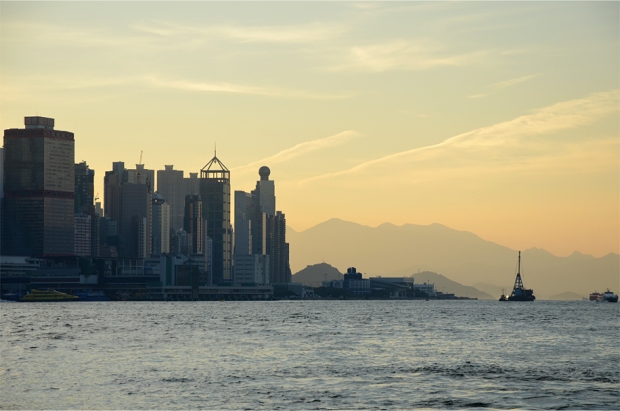 Looking westward, the mountains of Lantau island are visible in the distance 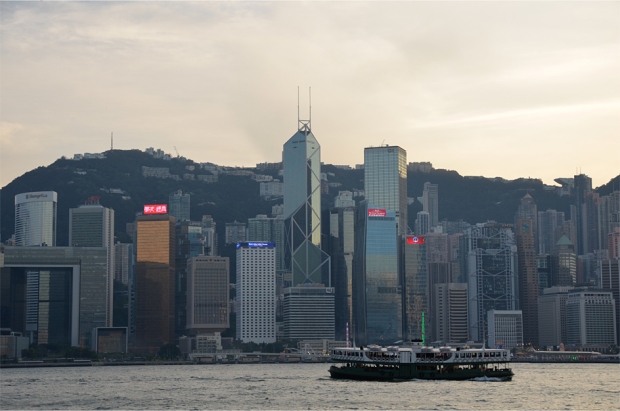 Harbour scenes just before sunset, with the traditional junk Duk Ling on the left